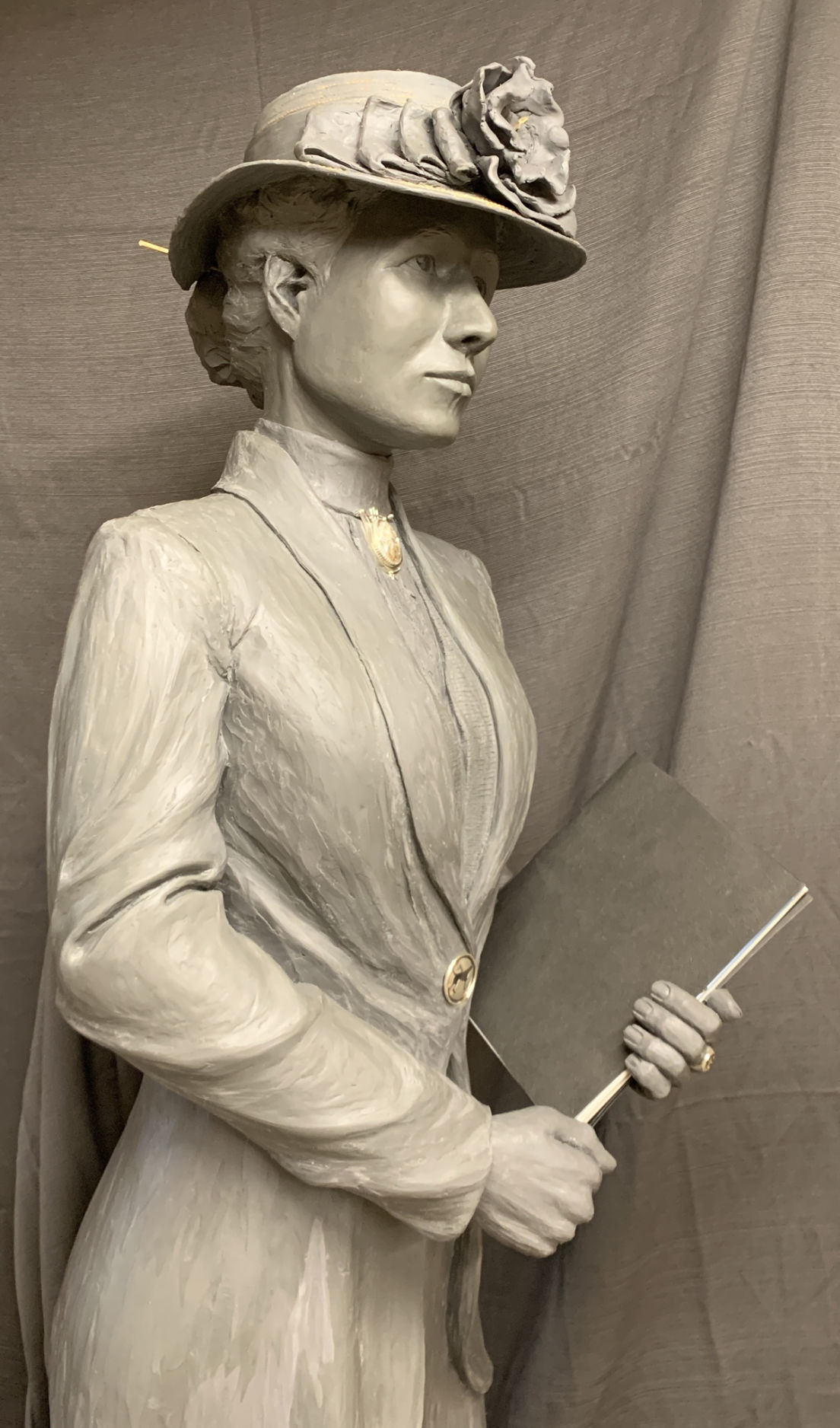 The nearly 7-foot statue of Nettie Depp of Barren County is shown. The statue of Depp will be the first full-scale statue of a woman at the Kentucky Capitol.

The nearly 7-foot statue of Nettie Depp of Barren County is shown. The statue of Depp will be the first full-scale statue of a woman at the Kentucky Capitol.

FRANKFORT – For the first time in Kentucky’s 228-year history, a life-size statue of a woman will be displayed in the state Capitol this summer.

The nearly 7-foot bronze statue will be that of Nettie Depp of Barren County, a pioneer in Kentucky education in the early 1900s. She became an elected school superintendent in 1913, seven years before women got the right to vote.

The sculptor, Amanda Matthews, of Prometheus Foundry in Lexington, told the state Historic Properties Advisory Commission that Depp’s statue is “a proxy for all women who have contributed large or small to Kentucky.”

The commission, which oversees statuary in the Capitol, unanimously approved the Depp project in July 2017 for the Capitol. It has been delayed for several reasons, including illness and the foundry’s workload.

Matthews informed the commission that plans call for unveiling the statue in the Capitol Rotunda on Aug. 22 after a 1,000 women’s march from downtown Frankfort to the Capitol. The march, from 11 a.m. to 2:30 p.m., is being sponsored by the city of Frankfort to celebrate the Kentucky Women’s Suffrage Centennial.

The Depp statue is expected to stay in the Rotunda for a few weeks with statues of men including the likes of Abraham Lincoln and Jefferson Davis.

It then is to be installed in the Capitol on the west side of the building on the first floor where a bust now sits of the late Republican U.S. Sen. John Sherman Cooper from Somerset. The Cooper bust will be moved to the east end of the Capitol.

Matthews said her only request is that the large statue be “physically carried” into the Capitol a few days before Aug. 22 by women in the military and emergency units. It weighs about 400 pounds.

Depp is a great-great aunt of Matthews and actor Johnny Depp.

The biggest problem now, said Matthews, is determining what group will oversee the project.

She said it first was under the supervision of the Kentucky Commission on Women but that panel was not funded under former Gov. Matt Bevin. Current Gov. Andy Beshear is seeking $357,500 a year in his proposed budget to restore its funding but it is not clear what role, if any, the commission would have with the Depp project.

There are a few sculptures now honoring women on public land in Kentucky, including Mother Catherine Spalding in Louisville, who helped form the Sisters of Charity of Nazareth in 1813; nurse Mary Breckinridge in Hyden, who helped establish neonatal and childhood medical care systems in the United States; Katsina, a dancer at the Lexington Women’s Garden honoring all women; and Alice Dunnigan in Russellville, who, in 1948, became the first African America female correspondent to receive White House credentials.

The only metal work honoring a woman now in the Kentucky Capitol is a plaque of the late Thelma Stovall, the first woman elected lieutenant governor of Kentucky from 1975 to 1979.

Matthews got her idea for the Nettie Depp statue in September 2014. She was researching gender equity issues for another project when she read in the Courier Journal that “the closest thing to a woman honored by a full-scale statue on public property in Kentucky is Carolina, (Civil War) Gen. John Breckinridge Castleman’s horse” in Louisville.

Matthews said she and her husband, Brad Connell, a co-owner with her of the Prometheus Foundry in Lexington, vowed to honor Depp.

No state taxpayers’ dollars are involved in the project, Matthews said. Grants have provided less than $10,000 for the statue and she and her husband have made up the difference through their nonprofit, The Artemis Initiative.

Its purpose is to create, erect and maintain public art to elevate the status of women, children, minorities, nature and animals. It is accepting contributions for the Depp statue.

Matthew told the historic properties commission that a statue like that of Nettie Depp costs about $120,000.

Depp, born Nov. 21, 1874, taught school for several years until running on the Democratic ticket for school superintendent in Barren County in 1913. She became the first female public official in the county.

As superintendent, Depp unified local schools to create the county’s first four-year high school, which was housed in the former Liberty College in Glasgow.

The merger of United Glasgow Graded and the Barren County High schools increased the number of enrolled students from twenty to more than seventy.

Managing a rural district presented challenges, including impassable roads and frequently flooded areas, which made it difficult to unite other schools in the county. Despite these obstacles, Depp improved and repaired local one-room schools by constructing seven schoolhouses to serve broad geographic areas.

Depp introduced and implemented a uniform curriculum for all schools in the county. Several schools added libraries and others utilized a traveling library service. She also tried to enforce the compulsory school law.

By the end of her four years, she had fined several families for not sending their children to school.

After serving as superintendent, Depp became principal at Cave City School until 1923. That same year, the Republican Party asked Depp to run for reelection as superintendent, but she declined, stating that she would only run in the name of education, not a political party. She completed her career as a teacher in Scottsville from 1923 to 1931.

Depp died of breast cancer in 1932 and was buried at Refuge Cemetery at Eighty-Eight in Barren County.

Copyright 2020 The Associated Press. All rights reserved. This material may not be published, broadcast, rewritten or redistributed.