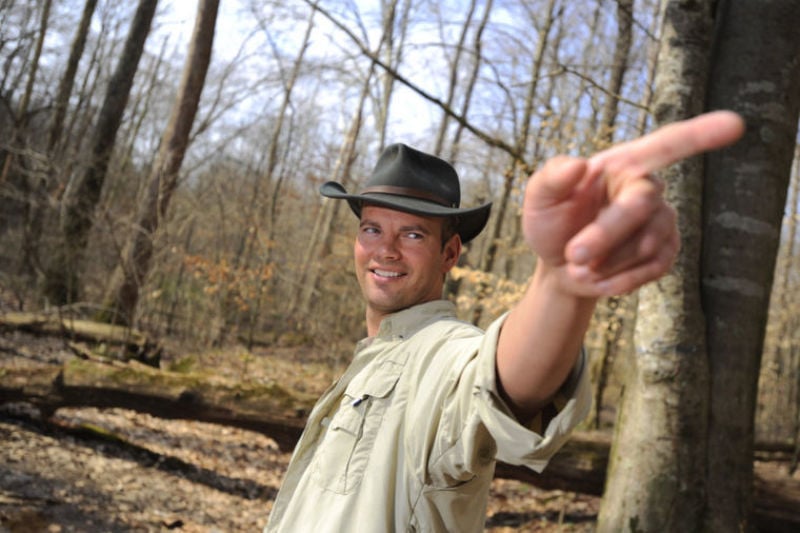 CORY RAMSEY has traversed the state back and forth and up and down. Here he is on one of his hikes in the woods. (Joe Imel/Daily News) 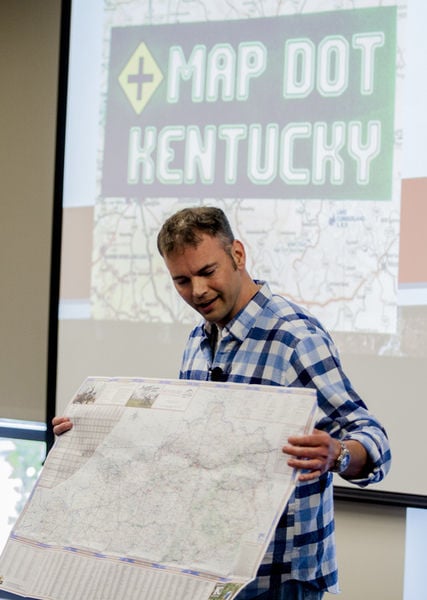 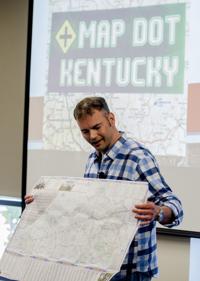 Cory Ramsey of Map Dot Kentucky holds up a map showing where he has traveled in the state during a presentation on local vacation spots on Tuesday, April 5, 2016, at the Bob Kirby Branch of the Warren County Public Library. (Austin Anthony/photo@bgdailynews.com) 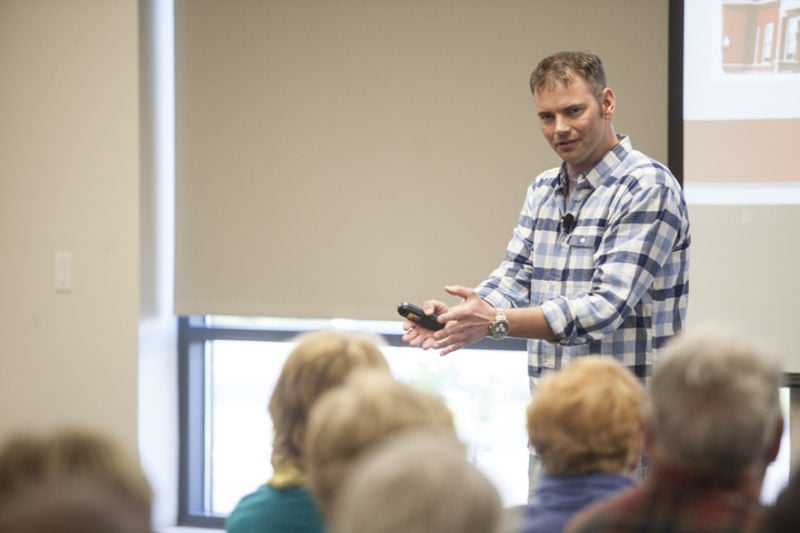 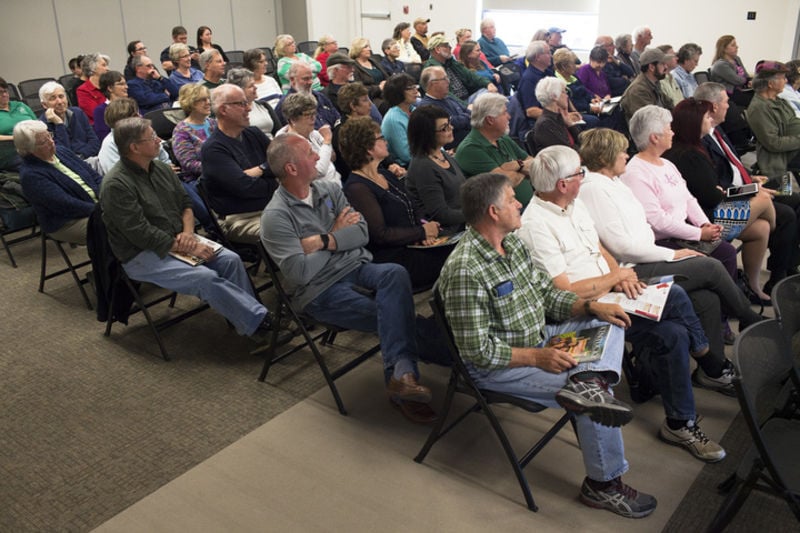 CORY RAMSEY has traversed the state back and forth and up and down. Here he is on one of his hikes in the woods. (Joe Imel/Daily News)

Cory Ramsey of Map Dot Kentucky holds up a map showing where he has traveled in the state during a presentation on local vacation spots on Tuesday, April 5, 2016, at the Bob Kirby Branch of the Warren County Public Library. (Austin Anthony/photo@bgdailynews.com)

When Cory Ramsey left his tiny hometown of Hickman to attend Western Kentucky University, it was a bit of a culture shock.

“When I came to Bowling Green, I had never driven through a stoplight before. The only thing we had was a blinking light by the fire department,” he said Tuesday during his “Kentucky Staycations” presentation at the Warren County Public Library Bob Kirby Branch. “I thought (Bowling Green) was the biggest city in the world.”

While working at Magna International Bowling Green, he experienced a two-month layoff in 2009. That’s when he decided to hit the road and see the sites of small-town Kentucky.

“They had on the map all these state parks,” he said. “I said, ‘Man I haven’t been to some of these places.’ I just got in the car and took these hiking trips and through those hiking trips I noticed I passed through a lot of small towns that looked like my hometown of Hickman.”

Getting off the main roads can lead to adventures, he said.

“We’re so used to driving interstates and parkways, but once you get off the four lanes, watch out,” he said. “It’s old-fashioned.”

His travels took him through places such as Quality, Do Stop, Possum Trot, Good Night and Flippin.

“If you look in depth of how some of these spots were named, it’s because the post office said where could we deliver mail to these groups of people who decided to settle in a particular place, and Kentuckians of the day said we’ll give you a name,” he said.

One place he visited was Rabbit Hash General Store, which burned down recently. It had been in business since 1831.

“They’re gonna rebuild it, but you know it’s not the same because that cast iron skillet you’ve got at the house, you lose it and get a Teflon skillet, it’s not the same,” he said. “That is the soul of Rabbit Hash, and it’s gone. That’s why you visit these places because you never know when a highway is gonna come through and wipe out some things. You never know when a wrecking ball is gonna destroy a destination. It just makes you sick to your stomach when you hear something like that.”

Dovie’s, a Tomkinsville restaurant, has been open since about 1940, Ramsey said.

“Open the door, there’s no TVs, no radios, no music playing. It’s just silence and all you hear is the sizzle of the griddle. Nothing. They don’t say hello to you,” he said. “Four women set up behind this bar, no tables. No chairs. Bar stools is all you’ve got.”

Ramsey asked for a Dovie’s burger but quickly found that wasn’t the correct way to order.

“You say you want it one of two ways – squeezed or unsqueezed. They’ve got this burger put into, they say it’s soybean oil. It’s healthy,” he said as the audience laughed. “I believe it’s the same grease they’ve had since 1940.”

They flip it four times in the grease.

“If you get it squeezed, they’re gonna take it out of there and squeeze it with a spatula and get as much of that soybean oil out of there,” he said. “If you order it unsqueezed, they’re gonna pull that thing up dripping, put it on a bun and give it to you as fast as they can before it soaks the bun. You can eat about two of them before you realize you’ve made a mistake.”

Ramsey visited Pleasureville, where he walked into the Pleasureville Pool Hall. Someone told them he could find a good burger there.

“He had a little counter besides this cash register. There was this little bitty griddle no bigger than this space in the carpet. I said, ‘Sir, I hear you’ve got a good cheeseburger here,’ and he’s like, ‘Yeah,’ ” he said. “He made me a burger and flipped open this Tupperware bowl with some onions and pickles and tomatoes.”

“I started walking around taking pictures holding my hamburger, and the guys over in the peanut gallery said, ‘What’s that boy doing? Where’s that photog at?’ ” he said. “Life in Pleasureville, you’ve gotta slow down a little bit.”

Ramsey took a picture of a closed store in Chicken Bristle and posted it on Map Dot, his Facebook page detailing his adventures.

“That night, somebody said she had grown up in that store. She had sat that night looking at that picture with tears in her eyes thinking of all the people that had grown up with her and grown up around her and the characters of that country store,” he said. “Even when we visit these places we bring a little bit of that history back to folks that might be able to relate to it.”

Another stop in his travels was McWhorter Variety Store in Albany.

“Fifty-three years he’s been running that thing, maybe 55 because it’s been a couple years since I was out there. I walked in there and stopped because I saw the Radio Flyer wagons,” he said. “You don’t see many of these old variety stores anymore. I remember walking through the aisles and seeing these old toys still for sale, the old monkey with the cymbals in his hands. I saw L’eggs pantyhose still in the egg. I didn’t know those things were supposed to last that long.”

Ramsey said he had a good time at McWhorter.

“He’s old school, and he was telling me they have just started a bypass around the town and he’s worried that finally after all these years he might be losing a little of his business, but you know how it is,” he said. “Once you get a customer in those places, people keep coming back.”

“If you haven’t been to Cumberland Falls, you need to go. This is the spot that everybody across the country is driving to see in Kentucky and folks say ‘what’s your favorite state park’ or ‘what’s your favorite place’ and I’ll say Cumberland Falls,” he said. “I think I’ve been there 13 or 14 times and stayed at the lodge. The drive there is perfect. The scenery there is perfect.”

There are 13 covered bridges in Kentucky, Ramsey said.

“We used to have about 400 up until the 1960s until a lot of them started to show their age and fall apart. Transportation came by. If they looked like they were falling apart they just pushed them in the river,” he said. “Nobody thought they were a tourist attraction back then. Then what happened? Clint Eastwood came along and got us all hot and bothered with that ‘Bridges of Madison County’ movie. We’ve gotta start promoting our covered bridges. The highway markers say they’re very romantic.”

Ramsey said Hartford, which according to a welcome sign is the “Home of 2,000 Happy People and a Few Soreheads,” has a Sorehead Award that it gives out – it’s sort of like the Kentucky Colonel honor.

“I wanted a Sorehead Award for me and my crew. I could not get a hold of the Hartford government. So I posted on my Facebook page and I probably had about 10,000 people following me, and I said I’m having trouble getting in touch with the Hartford government,” he said. “It wasn’t 20 minutes later somebody listed the mayor’s phone number, cellphone number, email, Twitter account. I get a private message on my Facebook. It’s from the city attorney of Hartford.”

Ramsey told the city attorney he’d like a Sorehead Award.

“He said, ‘I have the mayor right here. Would you like to talk to her?’ He put us on a three-way,” he said. “She said, ‘This is a very prestigious award. She said (U.S. Senate Majority Leader) Mitch McConnell got the award and said it was the greatest honor he’d ever received. We hem and haw for 20 minutes about this Sorehead Award because it’s a very important thing and finally Hartford gives in and we get our Sorehead Award.”

Tom and Linda Lohmann of Bowling Green said a friend told them about Ramsey’s presentation.

“We like to travel and thought it would be interesting and it was,” Linda Lohmann said. “We have a beautiful state. It definitely piqued our interest.”

“I think he has done what people would like to do but don’t have time to do,” he said.

Susan Bliss and Nadine Sage, both of Bowling Green, talked about the presentation afterward.

“We’ve been to a lot of these places,” Sage said of she and her husband.

Bliss wants to travel more. Her husband retired last year, and if she can get him off his project list she hopes they will, she said.

“I have seen Cory’s articles,” she said. “It intrigues me what he does. It was cool seeing him in real time.”