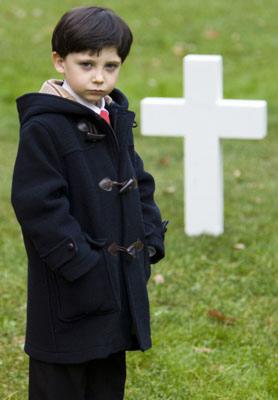 Now 30 years later comes a remake, just in time for 6-6-06, and although this version is a respectful retelling, it doesn't seem to have much of a purpose. Like Gus Van Sant's remake of &#8220Psycho,” &#8220The Omen” just doesn't bring anything new to the table.

For those unfamiliar with &#8220The Omen,” the movie tells the story of a U.S. ambassador, Robert Thorn (Liev Schreiber), whose wife, Katherine (Julia Stiles), has a stillborn child.

The ambassador decides without his wife's knowledge to substitute another baby whose mother died during birth and raise the child they named Damien as their own.

A few years pass and strange things begin happening. The child's nanny hangs herself and other deaths occur, making Katherine fearful of her child.

Robert starts to investigate his child's background and soon realizes Damien may be the son of Satan.

Director John Moore is very respectful to the original, with almost a shot-for-shot re-creation in this version. While I'll admit the film is well made, it lacks the tension and sense of doom that made the original work.

The cast only adds to the disappointment.

I suppose there will be an audience out there unfamiliar with the 1976 version of &#8220The Omen,” and that audience will probably be pleased with this version. You certainly can do a lot worse when it comes to horror remakes (&#8220The Amityville Horror” immediately comes to mind), but it's still not good enough to be worth your time. If you must see &#8220The Omen, ” I'd suggest you skip the remake and go rent the original.

DVD dandy of the week

This week's dandy is &#8220Dave Chappelle's Block Party” (B), a documentary that is the first new material from the popular comedian in nearly two years.

Set against the backdrop of a fascinating rap concert, this film gives fans a dose of why the comedian has risen to such huge popularity. It also sheds a little light on why he walked away from his Comedy Central series in the middle of filming season three.

In September 2004, right after signing a $50 million deal with Comedy Central, Chappelle organized a free block party that featured a combination of comedy and music in a Brooklyn neighborhood. The stellar roster of artists included Kanye West, Mos Def, Talib Kweli, Common, Dead Prez, Erykah Badu, Jill Scott, the Roots, Cody ChesnuTT, Big Daddy Kane and - reunited for their first performance in more than seven years - the Fugees. Chappelle served as emcee of the event, providing his trademark one-liners throughout the day and evening's festivities.

Director Michel Condry does a very good job of capturing the event, making it one of the better concert films in recent memory.

But &#8220Block Party” has a little more going for it, with footage from rehearsals and Chappelle returning to his childhood home in Ohio, wandering through town, handing out golden tickets to invite several busloads of citizens to join the party. Chappelle also enlists the services of a college band, which ends up providing West with a memorable entrance during his performance of &#8220Jesus Walks.”

While I enjoyed the concert footage, the film could have easily been about the comedian's return home and still been effective. It shows Chappelle as a guy who is maybe a little star-struck by his own success, almost to the point of feeling guilty about it.

I was already a fan of Chappelle, but &#8220Block Party” made me appreciate him even more. Here is hoping his self-imposed hiatus doesn't last much longer.

&#8220Dave Chappelle's Block Party” is rated R for language and will be available Tuesday on DVD.

- Sportswriter/movie reviewer Micheal Compton now has reviews available on the Web. Go to www.bgdailynews.com and click on the Compton's Critiques link for a quick hit of movies now playing in the area. Micheal can also be reached via e-mail at mcompton@bgdailynews.com.