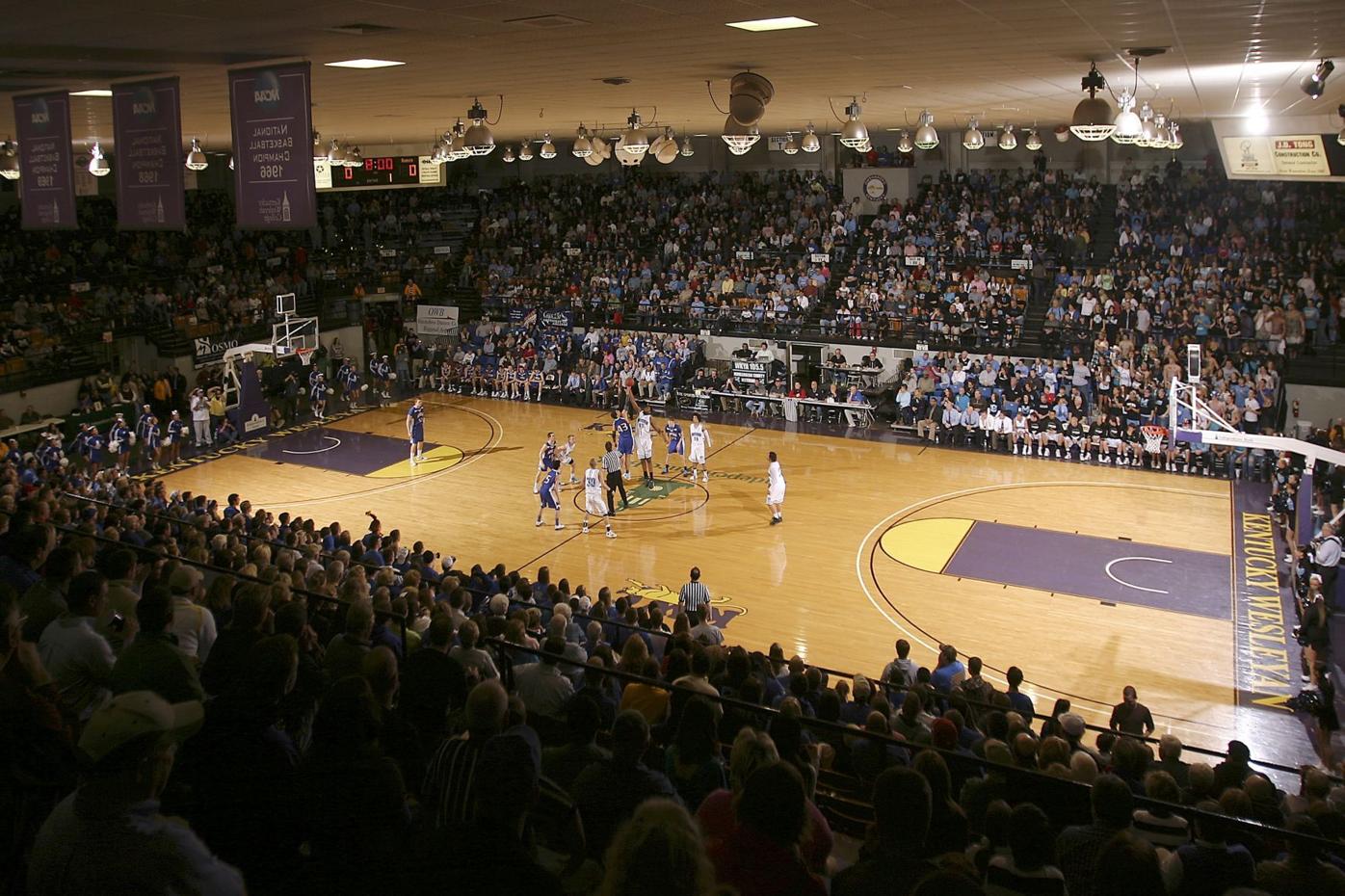 Top: The Sportscenter in Owensboro hosts a basketball game. Above: The facility was originally called Owensboro Memorial Recreation Center.

Top: The Sportscenter in Owensboro hosts a basketball game. Above: The facility was originally called Owensboro Memorial Recreation Center.

Before Rupp Arena ... before the KFC Yum Center ... before Memorial Coliseum ... before Freedom Hall ... and before E.A. Diddle Arena there was the Sportscenter in Owensboro.

For decades, basketball has been searching for the ultimate place to play and be watched by thousands of fans.

In 1949, the city of Owensboro went out on a limb and built a structure that would not only add to the quality of life for the region, but fill a desire to have a gym that seated more than 1,000 people. Costing $500,000 in bond sales and initially called the Owensboro Memorial Recreation Center, colleges and high schools immediately wanted to perform in the 5,500-seat complex. It was the biggest thing around.

A couple of hundred miles away in Lexington, Adolph Rupp and his Fabulous Five team had just won the Olympic gold medal and the NCAA championship. They were the talk of the nation.

Rupp was no dummy. He agreed to bring his team to Owensboro to play the dedication game Feb. 5, 1949, against Bradley. But you can bet Rupp had another reason to take one of his greatest teams to Owensboro. (The night before, a high school doubleheader had actually been the first games.)

Owensboro High School had the best player in Kentucky as well as the nation, and a good way to get and keep Cliff Hagan’s attention would be to bring the Kentucky Wildcats to town.

Not only did Hagan head to Lexington for college, but Rupp assured his star he would bring him back to play in the new arena.

In 1952, Hagan and teammate Frank Ramsey from Madisonville returned and led their fourth-ranked team to a 116-58 win over Mississippi. Hagan’s 37 points led six Wildcats in double figures that night.

The new arena was off and running. But it wasn’t all basketball.

In the 1950s and 1960s, the facility became an entertainment magnet with some of the biggest names in show business.

In the 1970s, the big names continued to visit Owensboro. A KISS performance in 1975 is still talked about, not necessarily because of the music, but because the over-charged pyrotechnics caught the roof on fire. The group was permanently banned from returning. By the way, the ticket cost that night was $5 in advance and $6 at the door.

WWE wrestling, the circus, rodeos and the Globetrotters make regular appearances in the Sportscenter.

But the team with the most games at the Sportscenter over the years has been Kentucky Wesleyan College, a school that has won eight national titles. Perhaps one of the greatest players to play in the Sportscenter was King Kelly Coleman, who in a three-year career (1957-1960) set some scoring records that still stand.

In the early 1950s, basketball was big at the Sportscenter. Some SEC teams even scheduled home games against UK there because they would draw a bigger crowd than on their own campus, and also collect the gate.

In 1956, Evansville’s Purple Aces played an entire season at the Sportscenter while their own Roberts Stadium was being constructed. Roberts closed permanently in 2011 when the Ford Center opened.

Bruce Pearl, the current Auburn coach, has fond memories of the Sportscenter while coaching at Southern Indiana University and winning a national Division II title in 1995. “It was a great arena to coach in, especially when it was full,” Pearl said on national TV.

In a locker room tirade on one of his visits to Owensboro, he ripped a sink off the wall.

It was not basketball, however, that drew the largest crowd in history.

Roy Rogers, the singing cowboy and TV and movie star, packed in fans literally to the rafters when he appeared with wife Dale Evans.

Jack Hicks, the Owensboro baseball legend, told a publication several years ago that Rogers seemed to be in life what he was in the movies.

Hicks spent time helping the Sportscenter with special events. One of those times was when he was responsible for picking up the nation’s No. 1 cowboy at the Evansville airport and then getting him back after his show in Owensboro.

“Word spread at the airport that the famous couple would be arriving,” Hicks was quoted in the publication. “I asked Roy if he wanted to drive around back to avoid the huge crowd, ‘No these people came to see me and I’ll get out and greet them.’ ”

Hicks also talked about his encounter with Liberace, a TV star who played the piano. Hicks said the star was having a big birthday party and invited a group back to his motel to celebrate.

It was Hicks who is credited with naming the Sportscenter. He wrote a local sports column and, tired of writing the words Owensboro Memorial Recreation Center, he simply called it the Sportscenter.

David Letterman once performed at the Sportscenter. As a teenager growing up in Indianapolis, his dad drove him to Owensboro to participate in a variety show. It’s not known what his talent was or the outcome.

It seems that anyone who has lived in Owensboro for a number of years has a story or two about the Sportscenter.

One of them is Terry Woodward. His dad opened a record store the same year the Sportscenter began operating in 1949. That store evolved into Wax Works, a national DVD distributor for ESPN, NCAA, NASCAR, NFL and several others.

Woodward, however, was working his way up.

“I got a little stronger as I got older and moved up to selling Cokes. I carried 15 of them in their bottles and when I sold one I opened it and poured it in a cup,” he said. “I hit the jackpot one night when Sammy Kaye, the band guy, played here. I knocked on his dressing room door and asked if anyone was thirsty. He bought all 15 and gave me a $5 tip. I ran all the way home that night.”

Hal Mischel knows a thing or two about the Sportscenter. As the facility’s manager for about 20 years, he saw many of the events that passed through Owensboro.

“My dad did some coaching and was there quite a bit with his team that later became Owensboro Catholic (High School), so I was around back then. But one of the good stories was when Victor Borge (a comedian/pianist) came here,” Mischel said. “He was to do an 8 o’clock show, but he went across the river to Shawneetown (Ill.) to get married ... didn’t make it back til 10 or 11 that night.”

By then, the crowd had gone home and Borge’s lack of a show was not so funny. Mischel said the comedian made up the show at a later date.

Perhaps no one in the history of the Sportscenter has more of a connection than Joel Utley. In 1961, he jumped at the chance to become the voice of the KWC Panthers. Fifty-nine years later, he had called 1,660 games, with well over half of them being in the historic building.

When Utley retired in 2018, he had become the only broadcaster in the nation to call 12 NCAA championship games, including eight NCAA Division II titles. He has been inducted in numerous local, state and national halls of fame.

In 1977, the Executive Inn, a 640-room hotel with a Las Vegas-style showroom opened in Owensboro and quickly became the venue of choice for world-class entertainment. Jerry Lee Lewis, the Beach Boys, Billy Ray Cyrus, Keith Urban and Beatle George Harrison are just a handful of those who performed there. For 32 years it brought visitors to Owensboro before being demolished in 2009 to make way for a new convention center and hotels.

Here is a timeline for basketball arenas in Kentucky:

– Gary P. West’s column runs monthly in the Daily News. He can be reached at westgarypdeb@gmail.com.