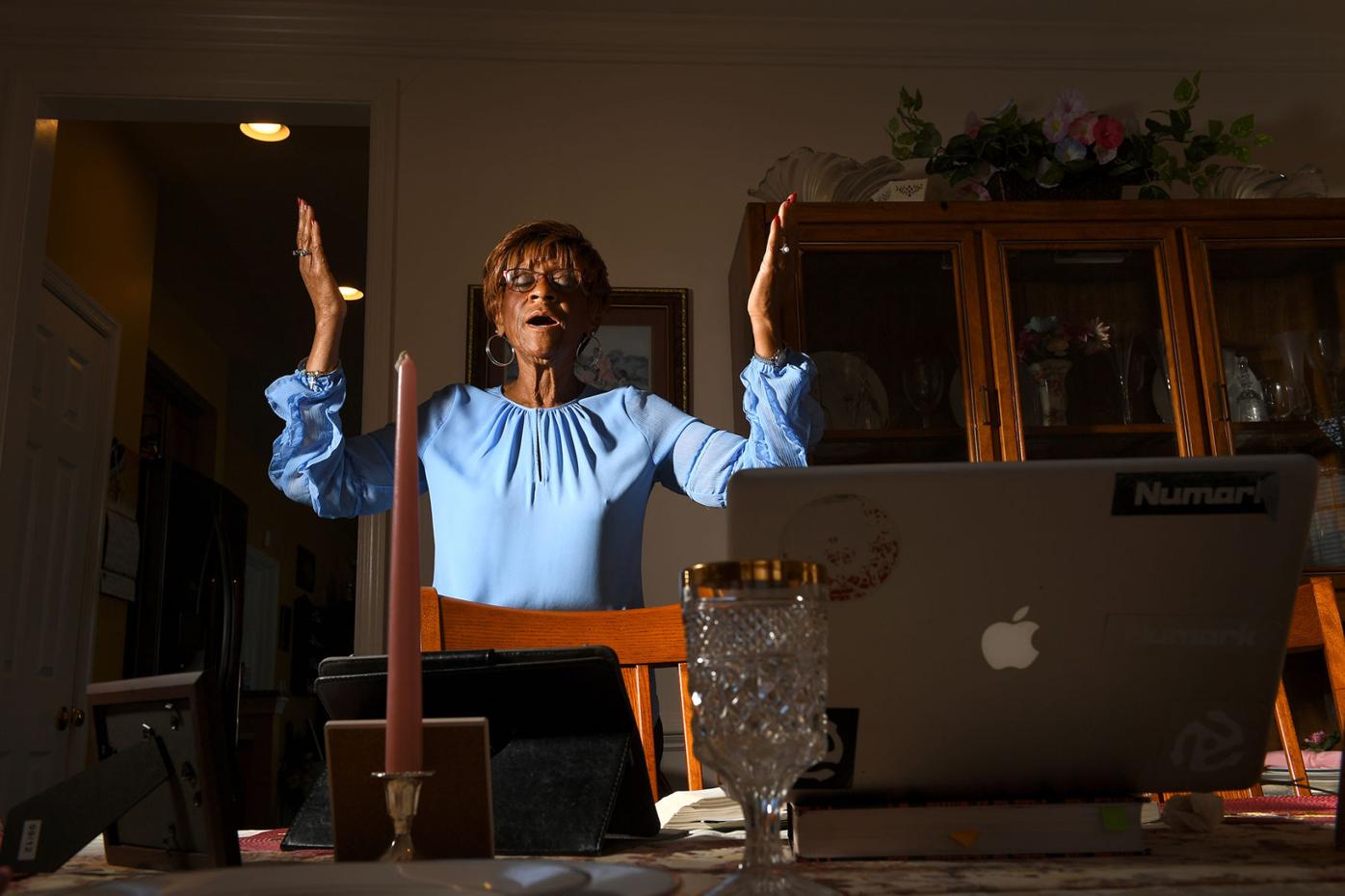 Before the coronavirus pandemic, Callie Terrell, 71, sang with the choir at St. Joseph Catholic Church in Alexandria, Va. Now she prays and sings along while watching the service alone in her dining room in Dumfries, Va. 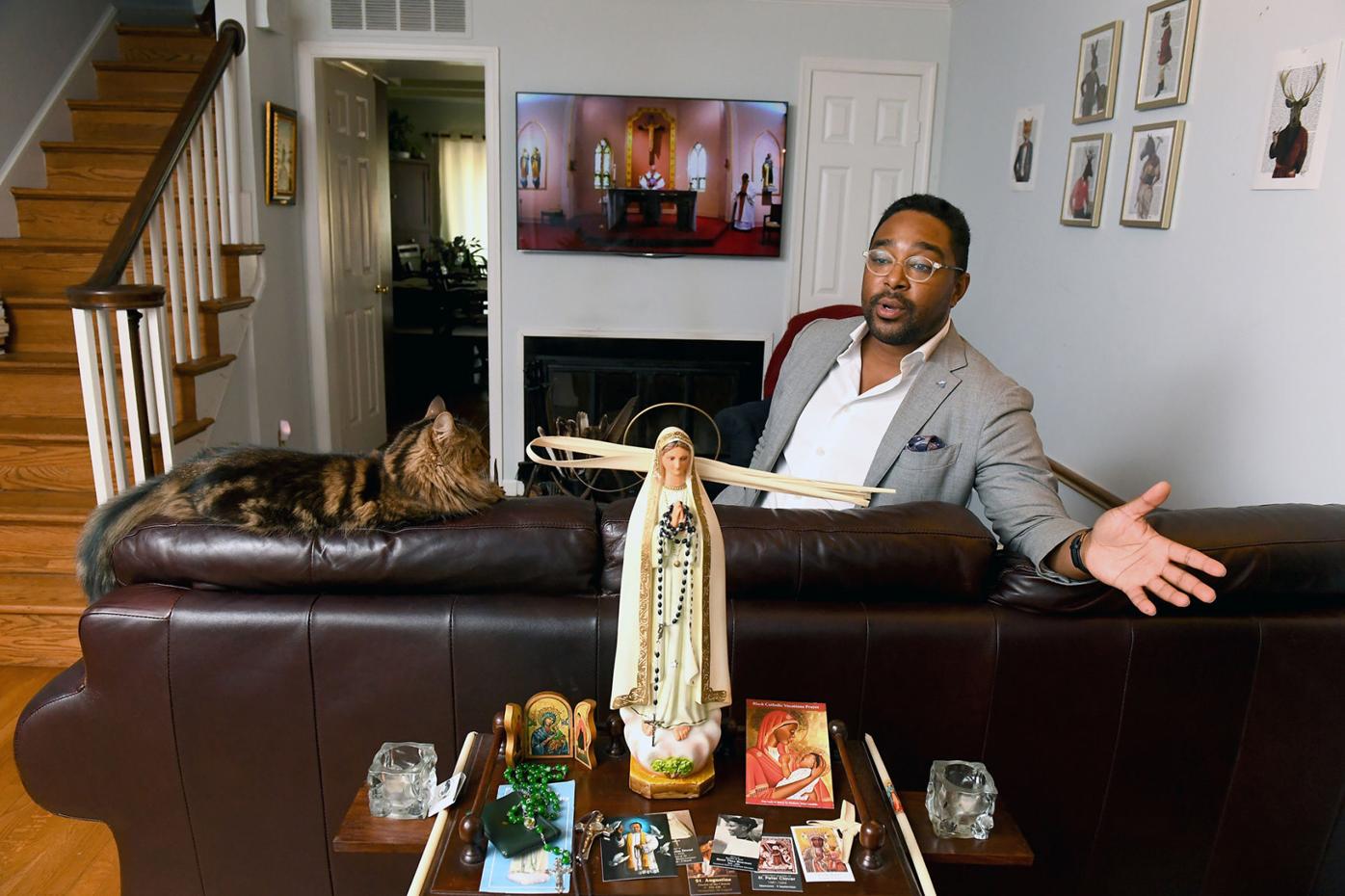 Christian Bentley likes to sing along during online sermons at his home as his cat, Pedro, watches from his perch.

Before the coronavirus pandemic, Callie Terrell, 71, sang with the choir at St. Joseph Catholic Church in Alexandria, Va. Now she prays and sings along while watching the service alone in her dining room in Dumfries, Va.

Christian Bentley likes to sing along during online sermons at his home as his cat, Pedro, watches from his perch.

Callie Terrell dresses up just once a week now – for church. Sunday morning services were starting, so Terrell made her way in her ruffly blue blouse, hoop earrings and done-up short hair to the dining room table, where she logged on to her laptop and began to worship in her strange new religious world.

Scouted by a Motown producer as a teenager, the 71-year-old has always loved to sing, but nowhere as steadily and deeply as in St. Joseph Catholic Church’s gospel choir in Alexandria, Va. In normal times, she would be standing there with them, all in their white robes at the front of the church, joining their voices to create a special kind of prayer.

“We can be up there and look out and people have tears in their eyes,” Terrell said. When she sings at church, she said she feels the Holy Spirit running through her body.

But with health officials saying “normal times” won’t return for a long time because of the coronavirus, Terrell flipped on Facebook Live on her grandson’s laptop. Like many people, concern about COVID-19 is keeping her at home.

“Good morning everyone,” she types to the 77 people online at the start of the 10 a.m. Mass.

Usually chatty and vivacious, Terrell online is mostly silent. She says little else during the hourlong virtual service, which leaves her feeling like a spectator instead of a conduit of God.

If you have ever sung with another human being, you know that communal singing can be deeply moving, even transcendent. One study found that performing music resulted in participants having increased endorphin release in the brain “in comparison to listening to music alone,” the University of California at Berkeley’s Greater Good Science Center reported. The center also cited research showing a connection between how much someone is affected by music and how much they feel connected to a group.

“In other words, music makes us affiliate with groups,” the research found.

For American religion in the past half-century, singing has increasingly become a way for many to encounter something larger than themselves. From slick praise bands with highly produced videos as stage backdrops to rousing gospel choirs to ancient devotional chanting, experts say more Americans experience the mystical through communal singing than any other way, including classic religious rites such as baptism.

“The importance of singing together in a Christian community, it’s hard to overstate,” said Brian Hehn, head of the outreach arm of the Hymn Society, one of North America’s largest groups focused on congregational song. “For most Christian communities, singing is the primary act that people are doing.”

Terrell tries to make church as meaningful as possible in her dining room in Dumfries, Va., with careful table settings, candles and crystal glasses. But when “The Gloria” comes on, or “Softly and Tenderly Jesus Is Calling,” her singing is quiet. Some choir members don’t sing with the virtual service at all. Others don’t comment. Some don’t even turn it on.

“It’s been at some points unbearable,” said fellow choir member Christian Bentley, 33, who works in marketing and mental health. “That feeling, when you’re singing your heart out ... that’s not replaceable during COVID. Live-streaming can’t do that.”

The director of music at St. Joseph, Eugene Harper, calls the choir’s last meeting, on March 15, “a day of infamy. Everything we thought of as church – the body of Christ, the community of faith coming together in song and worship – ended as we had come to know it.”

Coronavirus clusters have been traced back to worship services, and epidemiologists say singing together in the COVID-19 era seems to be especially dangerous. Research suggests that singing releases large droplets that can transmit significant portions of the virus. So a congregation singing inside a church is like “100 people coughing for an hour,” said Linsey Marr, a Virginia Tech engineer and professor who studies the transmission of airborne diseases.

And unlike group talking, group singing for now isn’t possible on Zoom because there is a time lag. That means no rehearsing together virtually for most choirs. Some better-resourced congregations have tech staff who can take a handful of their singers or musicians and make a mash-up that congregants can watch – like a cool music video with those now-familiar Zoom boxes. But trying to sing along with the online worship on Sundays, in your home alone, can be a weak facsimile.

The Hymn Society had its annual conference in July – virtually – and Hehn said people are sharing ideas for how to be more creative, including more call-and-response exercises on Zoom and blending in more movement and art. Others have tried to encourage “porch singing” (which is what it sounds like) and family singing.

“On the one hand, it’s been a huge loss, and people here are really grieving,” Hehn said. “On the other hand, it’s an opportunity ... a time to deeply reflect on why we do what we do and how we do it.”

For members of the choir at St. Joseph, a 104-year-old parish founded by Black Catholics, much more than Sunday service has been lost.

Before the pandemic, a group from the church choir would go out after Thursday rehearsals to Hops Grill in Potomac Yard. Every summer, they take a trip to North Carolina for a fundraising concert, bringing a busload of school supplies for local schools. There’s the annual retreat to places such as Barbados and the anniversary celebration concert of the choir itself, which began in 1976.

When something is especially moving at rehearsal and people cry while singing, they talk it through after – what words connected with them and why. And they treasure the feeling that comes on Sundays, knowing they helped others touch something greater or more hopeful. Singing with others, Bentley said, is his therapy, his prayer. One coping skill is to listen to a lot of religious music at home in Alexandria while he makes coffee and gets dressed up – as Terrell does – before logging on to the live-streamed service. “For me, singing is very, very spiritual,” he said.

Hearing her fellow congregants sing, and singing to and with them, helps build her faith. They’re holding one another up, she said.

Before the coronavirus crisis, Terrell sang with different groups multiple times each week. These days, she goes to the basement and sings along with old gospel tracks that she plays on her CD player or her phone.

She was born and baptized at St. Joseph and started school when the city was segregated, then grew up to become the longtime administrator for the Alexandria Fire Department. Now she is retired, and the head of the choir for the heavily Black parish is white.

Without singing, Terrell feels a bit lost. The other day, she and her husband, a retired police investigator who is also a Baptist minister, were so bored that they got in the car and drove south, with no destination in mind.

During the Sunday service, in her dining room, with her husband upstairs and her grandson in the kitchen, Terrell makes the sign of the cross along with the priest, who she sees on her screen.

“I don’t kneel because I can’t get off the floor!” she said, laughing about her at-home tweaks.

When the soloist starts to sing, Terrell mumbles along quietly.

Thirty miles away in Washington, Vancine Washington, 66, wakes up on Sunday mornings “and kind of mopes around a bit.” She, too, was born into St. Joseph and sings in the gospel choir. Her Sunday routine is to read some scripture, then flip on the streamed Mass. Washington, who lives alone, said she doesn’t post comments on Facebook like some others do, and she usually doesn’t even sing along.

“I’m listening more so than participating these days. This is the hand we have been dealt at this time, and I want to put myself in a place where I’m ready to receive,” she said, noting that several places in Christian scripture say, “God requires we make a joyful noise. But that doesn’t always have to be with other people. I see this period as an opportunity – a hard one.”