On the agenda for Tuesday’s Bowling Green City Commission meeting is a vote on changing the way the commission votes on ordinances.

Currently, the commission votes on both the first and second reading of ordinances, but only the second vote is binding.

Although it is rare, commissioners have changed votes between the first and second reading.

Under state law, ordinances must be read twice. Voting on a first, nonbinding reading, however, is required only by city ordinance.

Changing that policy was discussed at a city retreat Tuesday.

Commissioner Dana Beasley-Brown said at the retreat the current process is “confusing for the general public,” with many people thinking an ordinance is final after a first vote by commissioners.

But Commissioner Sue Parrigin said the public “deserves to know how we feel about something” before a final vote.

While no vote was taken at the retreat, there was a consensus of the commissioners present to put it on a commission meeting agenda for further discussion and a vote. Commissioner Joe Denning was not at the retreat.

City Attorney Gene Harmon said at the retreat that state law does not mandate that a first reading of an ordinance be voted on, and an informal poll of other municipalities showed that many others don’t have their governing bodies vote on a first reading.

The proposed changes to the city ordinance include an exception for an “emergency ordinance,” where a vote on a first reading will still be required.

Also on the agenda for the 4:30 p.m. meeting at City Hall is a second vote on a rezoning for a large multiuse development on Russellville Road.

Developers are seeking to rezone 83.41 acres at 6309 Russellville Road from agriculture and general business to single-family residential, multifamily residential, highway business and light industrial. The development plan includes a 19.88-acre multifamily portion that will have up to 456 apartments, a 16.33-acre portion along Russellville Road to be zoned highway business and a 35.1-acre portion that will be light industrial.

Commissioners approved the request 5-0 at the Jan. 20 meeting on first reading. 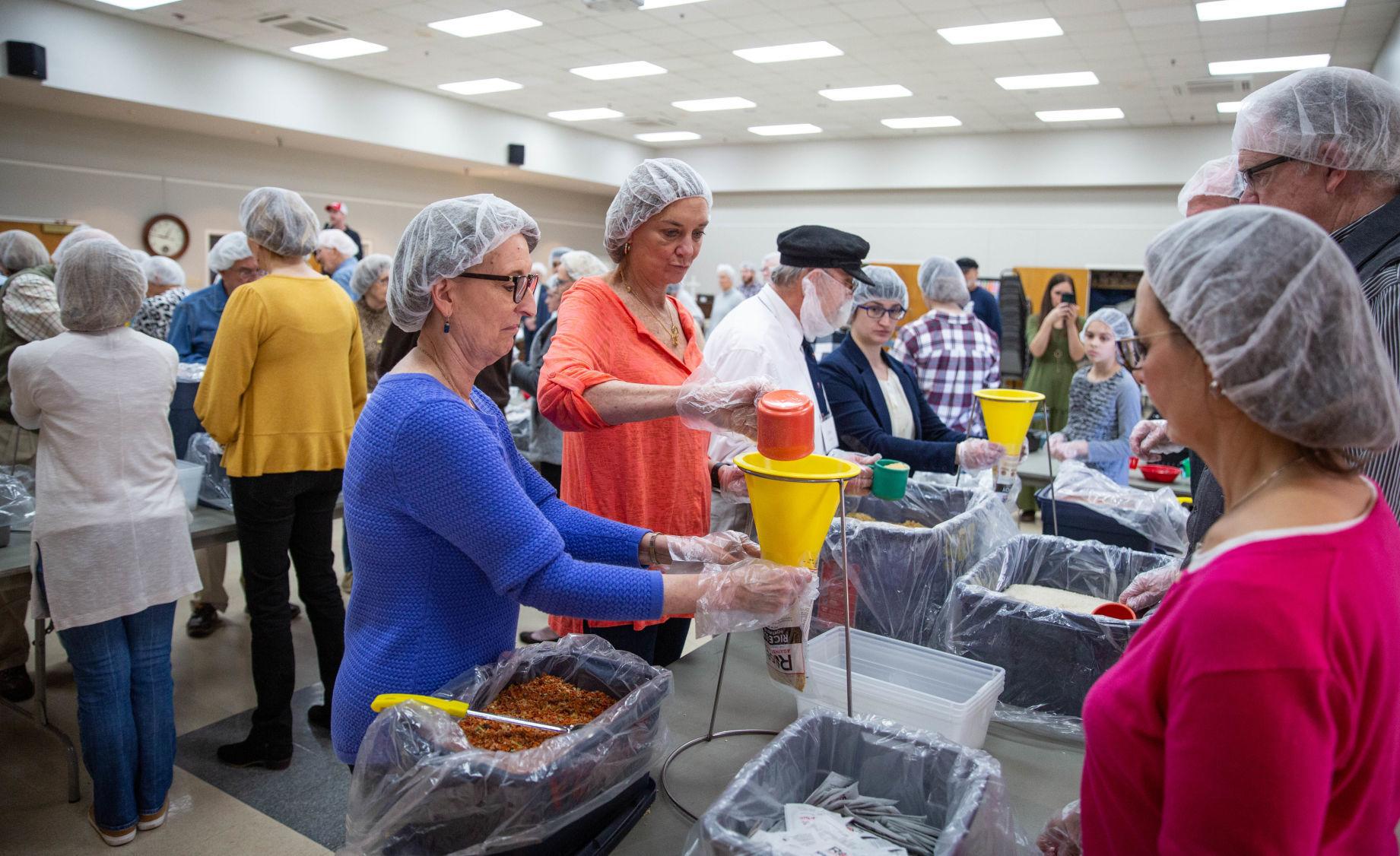 Volunteers at The Presbyterian Church pack 90,000 rice-soy fortified meals to be donated to the Rise Against Hunger organization in the church's fellowship hall on Sunday, Feb. 2, 2020. (Grace Ramey/photo@bgdailynews.com)

Jean Harris scoops dried vegetables she and the other volunteers at The Presbyterian Church packed into a bag with soy, rice and nutritional supplement packets for the Rise Against Hunger organization in the church's fellowship hall on Sunday, Feb. 2, 2020. (Grace Ramey/photo@bgdailynews.com)

Eddie Solberg-Hale seals one of the 90,000 rice-soy fortified meal bags he and the other volunteers at The Presbyterian Church packed for the Rise Against Hunger organization in the church's fellowship hall on Sunday, Feb. 2, 2020. (Grace Ramey/photo@bgdailynews.com)

Cory Morris of Rise Against Hunger instructs the volunteers of The Presbyterian Church in how to package the meals they put together into shipping boxes in the church's fellowship hall on Sunday, Feb. 2, 2020. The 90,000 meals they packed will be donated to the Rise Against Hunger organization. (Grace Ramey/photo@bgdailynews.com)

Following its regular service Sunday, The Presbyterian Church in Bowling Green hosted an international outreach that involved packaging almost 90,000 meals in partnership with the organization Rise Against Hunger.

With Rise Against Hunger providing materials and food, The Presbyterian Church had to provide the manpower.

“We have taken on a Matthew 25 idea of congregation, which is looking at eradicating poverty. We thought this would be a good way to tackle this issue,” Clarke said. “For us, one of our church missions is to share the vitality of Christ and love into the world, and I think this gives us the opportunity to do that. ... We can have that chance to fellowship while we do this and reach out to the world around us in whatever way we can do that.”

Presbyterian Church Pastor Matthew Covington said congregants do not know where the food they packaged will end up. Each package contains multiple meals, he said, and are designed so that some time can pass before the food is eaten, meaning some of the packages could be delivered internationally.

Morris said the meals have benefits beyond simple nutrition – for instance, they can help people finish their education or maintain jobs.

“It lets people turn around and be able to work in their community so they can hopefully lift themselves out of poverty,” he said.

Rise Against Hunger’s goal is to eradicate world hunger by 2030, which Morris said is an obtainable goal.

“As the millennium flipped over, a whole new set of developed goals were set by the United Nations, and most of those are targeted by 2030,” he said. “We could end hunger today. The problem is not the amount of food, the problem is not everyone realizes that there are people that are hungry.”

Rise Against Hunger operates 23 offices in the United States and 12 internationally, and the organization just recently packaged its 500 millionth meal.

“We have been doing this since 2005 and the Nashville office alone does about 80 events a year and packages about 1.5 or 1.6 million meals,” Morris said. “Last year, we packaged around 1.43 million meals.”

Morris also said the organization works with more than just churches, such as corporations, schools, health groups and many others.

“We are really excited for anyone to invite us into their space and let us facilitate, which is an extremely mobile and friendly, fun meal packaging event,” he said.

Volunteers at The Presbyterian Church packed 90,000 rice-soy fortified meals to be donated to the Rise Against Hunger organization in the chur… 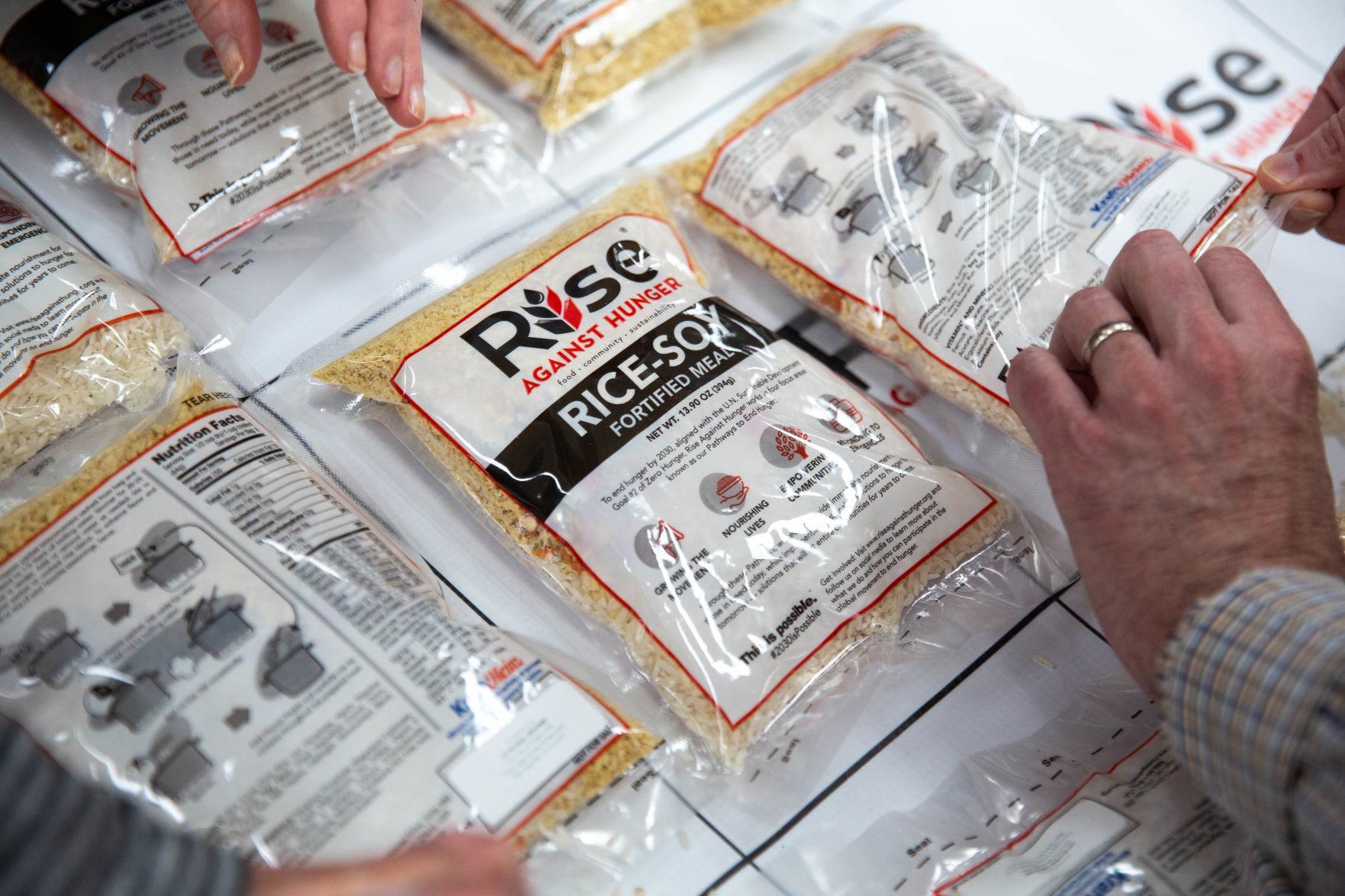 Volunteers at The Presbyterian Church pack 90,000 rice-soy fortified meals to be donated to the Rise Against Hunger organization in the church's fellowship hall on Sunday, Feb. 2, 2020. (Grace Ramey/photo@bgdailynews.com)

One thing no one knows about me is ... my favorite color changes on a daily basis.

My dream job is ... being a skipper on the Jungle Cruise at Disney. Then I would get paid to be overly sarcastic and make puns all day instead of doing it for free like I do now.

The best advice I ever got was ... “Take chances, make mistakes, get messy” – Ms. Frizzle from “The Magic School Bus.”

My hero and why is ... all of my pals on The Rockerz Dance Team, a group comprised of individuals with Down syndrome that I am lucky enough to coach. All of them have overcome incredible obstacles in their lives, yet they never let those challenges slow them down for a second. Watching them perform never fails to inspire me to live my life with the same courage, determination and occasional booty shaking that they do.

If I could it all over again I would ... not let my 12-year-old self ride The Zipper at the county fair eight times in a row.

The part of my job I could do without is ... all the lovely germs children tend to pass around.

The one thing I always carry with me is ... my phone.

The best meal I have ever had ... just about any visit to Cracker Barrel.

At the top of my bucket list ... I’d like to travel to all of the Disney parks in the world.

DES MOINES, Iowa – A Democratic campaign that has cost more than $1 billion, dashed the ambitions of veteran politicians, forced conversations about race, gender and identity and prompted fierce debate over health care and taxes crests Monday in the Iowa caucuses.

By day’s end, tens of thousands of Democrats will have participated in the famed Iowa caucuses, the premiere of more than 50 contests that will unfold over the next five months. The caucuses will render the first verdict on who among dozens of candidates is best positioned to take on President Donald Trump, whom Democratic voters are desperate to beat this fall.

It is a moment thick with promise for a Democratic Party that has seen major gains since Trump won the White House in 2016. But instead of optimism, a cloud of uncertainty and deepening intraparty resentment hangs over Monday’s election, which will finally begin to reveal who and what Democrats stand for in this tumultuous era.

“If anybody tells you they know who’s going to win, either they’ve got a whisper from God or they’re loony, because nobody knows,” said Deidre DeJear, the former state chairwoman for Kamala Harris and the first black woman to win a statewide primary in Iowa.

Iowa offers just a tiny percentage of the delegates needed to win the nomination but plays an outsize role in culling primary fields. A poor showing in Iowa could cause a front-runner’s fundraising to slow and support in later states to dwindle, while a strong result could give a candidate momentum that propels him or her to the nomination.

The past several Democrats who won the Iowa caucuses went on to clinch the party’s nomination.

The 2020 fight has played out over myriad distractions, particularly congressional Democrats’ push to impeach Trump, which has often overshadowed the primary and effectively pinned several leading candidates to Washington at the pinnacle of the early campaign season. Even on caucus day, Sanders, Warren and Klobuchar were expected to spend several hours on Capitol Hill for impeachment-related business.

Meanwhile, New York billionaire and former Mayor Mike Bloomberg is running a parallel campaign that ignores Iowa as he prepares to pounce on any perceived weaknesses in the field come March.

The amalgam of oddities, including new rules for reporting the already complicated caucus results, is building toward what could be a murky Iowa finale before the race pivots quickly to New Hampshire, which votes just eight days later.

With uncertainty comes opportunity for campaigns desperate for momentum. The expectations game was raging in the hours before voters began gathering at high school gyms and community centers in more than 1,600 caucus sites across the state.

Having predicted victory multiple times in recent weeks, Biden’s team sought to downplay the importance of Iowa’s contest the day before voting began amid persistent signs that the 77-year-old lifelong politician was struggling to raise money or generate excitement on the ground.

Biden senior adviser Symone Sanders said the campaign viewed Iowa “as the beginning, not the end,” of the process.

“It would be a gross mistake on the part of reporters, voters or anyone else to view whatever happens on Monday – we think it’s going to be close – but view whatever happens as the end and not give credence and space for New Hampshire, Nevada and South Carolina,” she said of the three states up next on the primary calendar.

The tone was noticeably more upbeat for Bernie Sanders’ campaign, which has repeatedly predicted victory and believes he’s running even stronger in New Hampshire. That’s despite increasingly vocal concerns from establishment-minded Democrats who fear the self-described democratic socialist would struggle against Trump and make it more difficult for Democrats to win other elections this fall.

In a fundraising message, Sanders campaign manager Faiz Shakir warned supporters to expect “an absolutely huge barrage of attacks from the political establishment” after Monday’s results are announced, implying again that Sanders would finish on top.

“There are a lot of reasons this thing moves hard at the end,” Trippi predicted. “I think Bernie going into the lead is really kind of the disruptive thing that’s going to make a lot of people look at who they are for.” 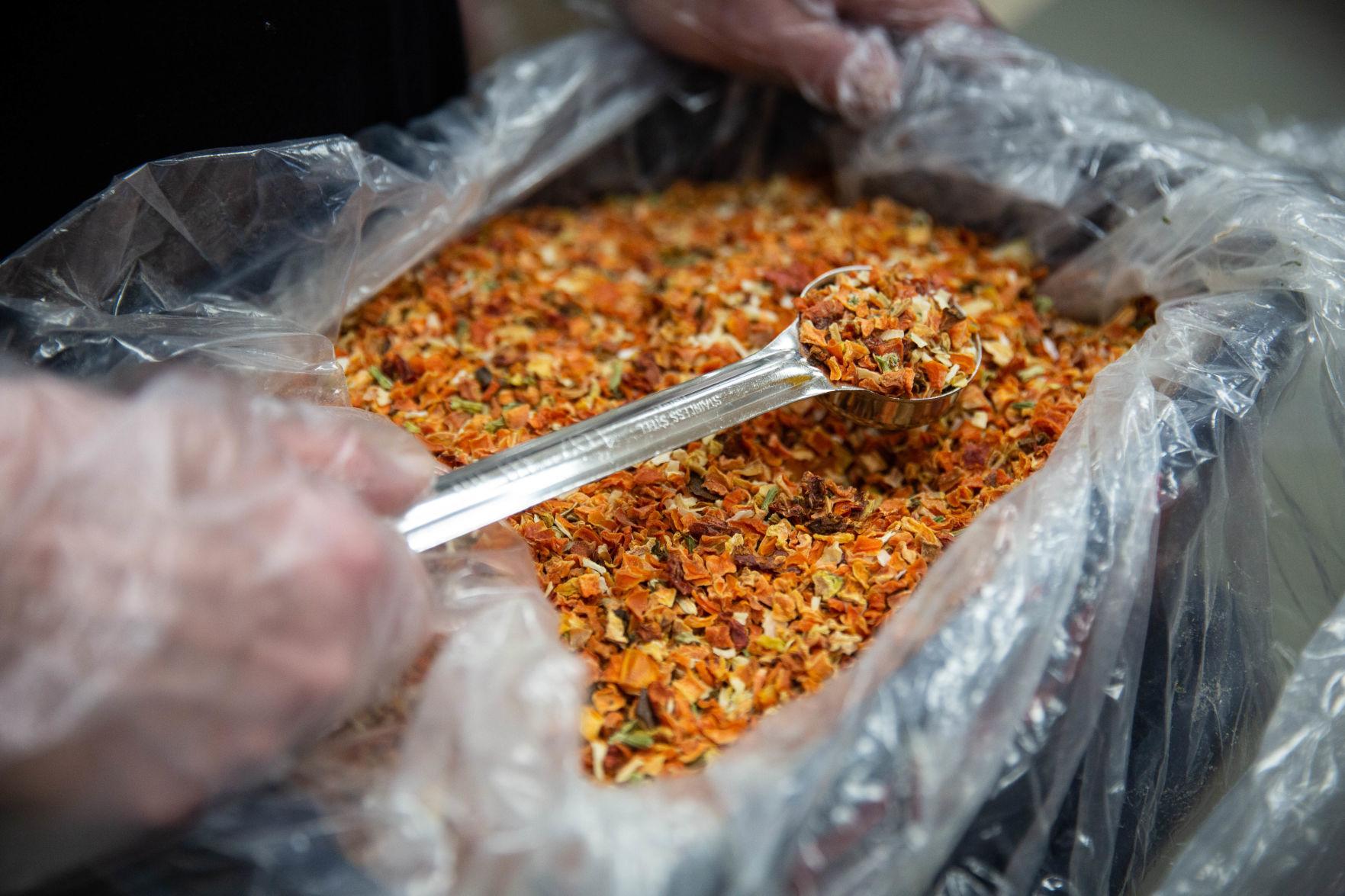 Jean Harris scoops dried vegetables she and the other volunteers at The Presbyterian Church packed into a bag with soy, rice and nutritional supplement packets for the Rise Against Hunger organization in the church's fellowship hall on Sunday, Feb. 2, 2020. (Grace Ramey/photo@bgdailynews.com)