Jennifer Lindsey, one of the new Court Appointed Special Advocates in the fourth set of CASA volunteers during the pandemic, stands outside her home Wednesday after recently taking her oath.

Jennifer Lindsey, one of the new Court Appointed Special Advocate (CASA) in the fourth set of CASA volunteers during the pandemic, stands outside her home on Wednesday, Dec. 23, 2020, after recently taking her oath. Lindsey will work to report cases of neglected or abused children. (Grace Ramey/photo@bgdailynews.com)

Jennifer Lindsey, one of the new Court Appointed Special Advocate (CASA) in the fourth set of CASA volunteers during the pandemic, stands outside her home on Wednesday, Dec. 23, 2020, after recently taking her oath. Lindsey will work to report cases of neglected or abused children. (Grace Ramey/photo@bgdailynews.com)

Ten new court appointed special advocate volunteers for the region were sworn in during a virtual ceremony earlier this month.

Nine women and one man, representing 3 counties in southcentral Kentucky, completed their virtual training requirements in November to become CASAs.

“We currently have over 60 children on our waitlist needing an advocate,” CASA of South Central Kentucky Executive Director Jana Sublett said in a news release. “These 10 individuals are ready to take cases, and with our current state, our children need them now more than ever.”

Since March, CASA’s 94 active volunteers have spent over 1,078 hours visiting with and advocating for abused and neglected children.

They have been assigned to over 56 new children who were referred to the program by family courts around the region.

Jennifer Lindsey is one of the 10 new volunteers after she gave over 27 years of service within the Bowling Green City School System as a school counselor.

Lindsey first heard about CASA from other retired teachers who decided to volunteer.

“I had heard good things about CASA from other teachers and how they checked in with children and cared about their well-being,” Lindsey said. “I just wanted to still be around children while also making a difference.”

Lindsey will work as an intermediate between her assigned child and the court. Lindsey and other CASA volunteers work mostly with foster children.

Her job is to gather info on the child’s situation and present it to the judge in order for informed decisions to be made.

“I’m really just another set of eyes on a child,” Lindsey said. “I recently was just assigned my first child, and I begin working with them in January.”

According to Lindsey, her training for the position informed her that CASA volunteers spend anywhere from two to four hours a month with their child.

With the pandemic raging, Lindsey says she is looking forward to assisting children in 2021 during what is still a great time of need.

CASA of South Central Kentucky serves Barren, Hart, Metcalfe and Warren counties. Applications for the next virtual training beginning Feb. 6 in Warren County can be found at www. casaofsck.org/volunteer.

Warren County Public Schools is implementing a new English language arts curriculum that explores social justice themes, including human rights and how students can affect societal change, a move that has drawn praise from some parents and questions from others.

For fifth grade students, as an example, the curriculum features academic modules that ask students to “consider the factors that contribute to the success of professional athletes as leaders of social change,” according to its website. Recommended fifth-grade texts include Pam Muñoz Ryan’s “Esperanza Rising,” an award-winning novel that centers on the experience of a migrant Mexican girl who moves to California during the Great Depression.

Laura Hudson, who directs instruction for the district’s secondary schools, said the curriculum is not just aligned with Kentucky’s evolving state academic standards but also aims to build solidarity and empathy among students as a focus.

“It’s completely tuned into the research that shows us that social-emotional learning and development is intrinsically tied to academic development,” Hudson told the Daily News in an interview earlier this month. “ … When you do that, kids feel safer around each other to voice their opinions, to make mistakes, which is so important to learning.”

The curriculum stresses critical thinking and writing, as well as the leadership values needed to foster respectful, inclusive cultures.

Expeditionary Learning Education was formed in 1991 out of a partnership between the Harvard Graduate School of Education and Outward Bound, a nonprofit that aims to build leadership skills, environmental and social responsibility among students, according to the organization’s stated outcomes.

“I think the inclusivity of the text choices is what has probably drawn parents’ attention,” Hudson said of the curriculum.

During a school board meeting in November, two WCPS parents praised the rigor and inclusivity of the curriculum. Taiwanna Bradford said she appreciated that her fifth grade student was being challenged with complex reading assignments and was “learning how to critically think.”

“My son is learning how to read a complex text, meaning one read may not be enough … Each read might have a different purpose for the reading, and because he’s re-reading text, he’s becoming much more attentive to details. He’s learning how to write thorough responses to open-ended questions,” using textual evidence and analysis, Bradford told the Warren County Board of Education Nov. 19. “He’s learning how to discuss texts with his classmates and how to respectfully agree and disagree with them. He’s also learning that it’s OK to change his mind when presented with new information. He is learning that, even while reading fiction, historical context is important in order to truly understand a character’s plight.”

Her son’s experience reading “Esperanza Rising” has spurred conversations that are “rich and go beyond simply restating the plot,” Bradford said.

“I’m in total agreement with the EL curriculum and what it has provided for my child,” Jones said, adding it has instilled an excitement for reading in his daughter.

It also had provided her with insights into other cultural backgrounds, he said.

“My daughter runs in and that’s the first thing that she wants to talk about, what she’s learning in this classroom setting, which includes engagement and sharing thoughts and things about other people’s lives,” Jones said. “She’s learned so much.”

Along with positive reviews, the new curriculum addition has also raised questions or concerns among some parents.

Hudson said some parents have asked about students studying the Universal Declaration of Human Rights over the American Bill of Rights or a module that prompts students to explore how athletes have often been at the forefront of social change, using baseball player Jackie Robinson as a given example.

Hudson said WCPS has used those questions as opportunities to provide more context (that the curriculum does, in fact, incorporate the American Bill of Rights) or to modify assignment prompts (allowing students to research any person who led social change, not just an athlete).

For their part, Bradford and Jones encouraged critics to keep an open mind.

“There are concerns I guess in regards to materials used, the content being taught,” Bradford said. “I believe it’s important that all voices are heard in this matter.”

Of “Esperanza Rising” and any critics the novel might have, Jones said: “I think that they really should read the book before they just make assumptions.” 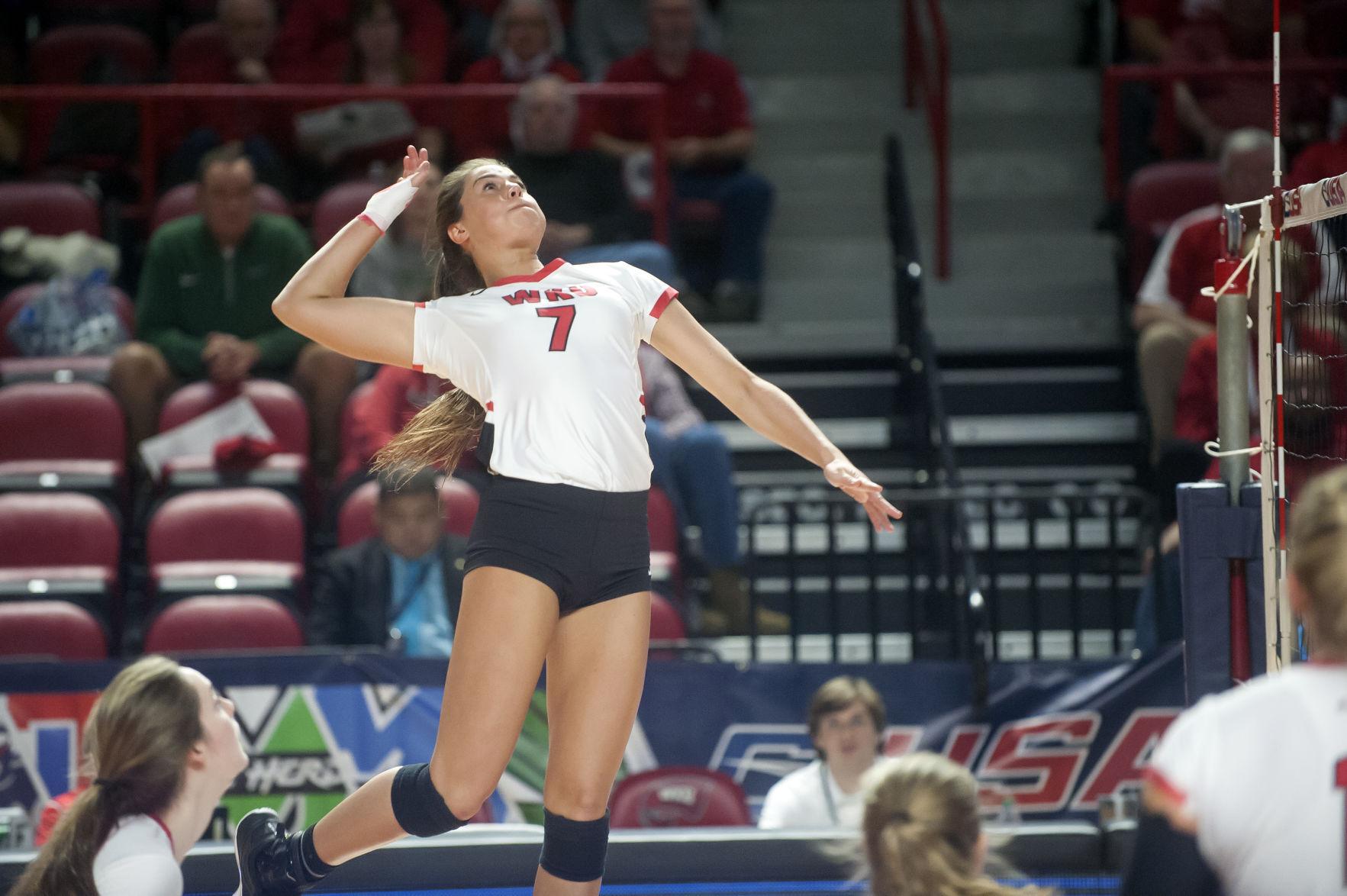 Western Kentucky’s Alyssa Cavanaugh goes for a kill Friday during the Lady Toppers’ 3-1 win over Charlotte in the C-USA Volleyball Tournament at E.A. Diddle Arena.

The repercussions of the Christmas morning bombing in Nashville continue to be felt in southcentral Kentucky this weekend.

The result has been spotty or no service for AT&T customers in the region ever since. That has also impacted some calls to 911 centers across both Tennessee and southcentral Kentucky.

Many agencies have listed alternate numbers for individuals to call in an emergency.

Bowling Green Police Department spokesman Ronnie Ward said the city’s 911 center, which also handles calls for the Warren County Sheriff’s Office and for the county ambulance service, has been able to reroute calls so the center can still handle multiple 911 calls as they come in.

“Technically there are still problems, but we have managed it so the public would notice very little difference, if any,” he said Saturday, adding that callers may get directed to leave a voicemail if there is a high volume of calls.

The new system has not caused any major issues so far, he said.

“Issues such as this are planned for and our staff is trained to think outside the box to keep the delay to a minimum,” Ward said.

It was unclear Saturday how long it would take to resolve the issues.

AT&T officials told the Associated Press that restoration efforts are facing several challenges, which include a fire that “reignited overnight and led to the evacuation of the building.”

This has forced AT&T teams to work with safety and structural engineers and drilling access holes into the building in order to reconnect power, according to the AP.

“Our teams continue to work around the clock on recovery efforts from yesterday morning’s explosion in Nashville,” the company said in a Saturday statement. “We have two portable cell sites operating in downtown Nashville with numerous additional portable sites being deployed in the Nashville area and in the region.”

The outages had even briefly grounded flights at the Nashville International Airport, but service was continuing normally as of Saturday, the AP reported.

Related
+6 The Latest: Driver charged after truck stopped in Tennessee
By The Associated Press
Updated Dec 27, 2020

NASHVILLE, Tenn. (AP) — The Latest on the Christmas Day bombing in downtown Nashville:

Although the coronavirus pandemic has hampered aspects of his office, Warren County Sheriff Brett Hightower has used an increase in receipts to come up with a 2021 budget that is $200,000 larger than the 2020 budget.

That’s up from the $8,445,000 budgeted for 2020 and reflects a projected increase in receipts collected by the sheriff’s office.

“The increase on the fees side allowed us to increase salaries across the board without requesting any additional funds from fiscal court,” the sheriff said. “That’s pretty good in light of the difficulties we’ve had to go through.”

Hightower included an allocation of $4,576,000 for his office from fiscal court, the same as 2020’s allocation.

“Being cognizant of every dollar spent is important,” said Hightower, serving his first four-year term as sheriff after being elected in 2018.

By far the biggest line item in Hightower’s budget is $7,680,000 for salaries and benefits.

The sheriff’s office has more than 100 employees, but that includes court security, school resource officers and office and administrative employees, leaving about 35 full-time deputies.

Hightower is aiming to increase the number of deputies, but the pandemic has made that difficult.

He said three new hires haven’t been able to start working as deputies because of coronavirus-related delays in attending the Kentucky Department of Criminal Justice Training in Richmond. He has also had some deputies out after they tested positive for COVID-19.

“We’re about five deputies short,” Hightower said. “A large portion of that is a result of COVID. It makes it a struggle.”

Hightower plans to invest in some new equipment in 2021, but some of the items on his wish list may depend on grant funding.

He has already purchased a speed trailer with the digital display of vehicle speeds to be used around the county to make people more aware of speed limits.

“It will be here in January,” Hightower said of the speed trailer. “We have a plan in place for when we get complaints about speeders.”

Hightower also plans to implement some hand-held radar guns for tracking speeders, but the biggest item on his list is body cameras for his deputies.

The sheriff said in June that outfitting his deputies with body-worn camera equipment would cost $150,000 or more. He’s hoping the time is right to get some grant funding for an expense that he says “has value for officers and citizens.”