What’s sprouting from 1,600 acres of Logan County farmland is about to change, and it could put the largely rural county on the front lines of a technological sea change.

Nashville-based solar power producer Silicon Ranch is leasing those 1,600 acres and will invest more than $150 million to build a solar array to provide electricity for the Tennessee Valley Authority’s Green Invest program.

The property along Watermelon and Mont-gomery roads, to the southwest of Russellville, should begin producing power in 2023 for two specific TVA customers: Facebook’s data center in Gallatin, Tenn., and the General Motors Corvette Assembly Plant in Bowling Green.

“It’s going to look different,” said Tom Harned, executive director of the Logan County Economic Development Organization. “The whole idea of farming is to generate revenue. They won’t be doing it by growing corn or soybeans, but it’s still a productive use of the land.”

Harned and Logan County Judge-Executive Logan Chick like the project for another reason: Silicon Ranch will employ as many as 450 workers to build the solar farm, with construction beginning in 2022 and to be completed in the fall of 2023.

Matt Beasley, chief commercial officer for Silicon Ranch, said in an email that the majority of the construction workers will be recruited from the region and the military veteran community.

When operational, the solar farm will provide Facebook’s data center with 145 megawatts of solar power and the Corvette plant with 28 megawatts.

For perspective, the Solar Energy Industries Association calculates that on average one megawatt of solar power generates enough electricity to meet the needs of 164 U.S. homes.

TVA and Warren Rural Electric Cooperative Corp. are partnering with Silicon Ranch to develop the project.

“This announcement is the result of Facebook’s, General Motors’ and Warren RECC’s leadership and our joint, long-term commitment to renewable energy across the region,” Chris Hansen, TVA vice president for origination and renewables, said in a news release.

The news release said TVA’s Green Invest program has since 2018 attracted nearly $2.7 billion in solar investment and procured more than 2,100 megawatts of solar on behalf of customers committed to converting to renewable energy.

The automaker has set a goal of becoming carbon neutral in its products and operations by 2040.

Beasley said the company will restore the land to a functioning grassland ecosystem while keeping the property in agricultural production through managed sheep grazing.

“This model of land management helps us keep our project sites in agricultural production while at the same time producing clean, renewable energy,” Beasley said.

Harned said the solar panels degrade over a period of a few decades and that the site can eventually be returned to strictly agricultural production.

Beasley revealed that another solar project will soon be coming to southcentral Kentucky.

It will be located in Simpson County and will serve the Franklin Electric Plant Board as part of TVA’s Flexibility Program for local power companies.

Such developments, Logan County’s Harned believes, are the wave of the future.

“This project is a step forward into the 21st century, or maybe into the 22nd,” Harned said. 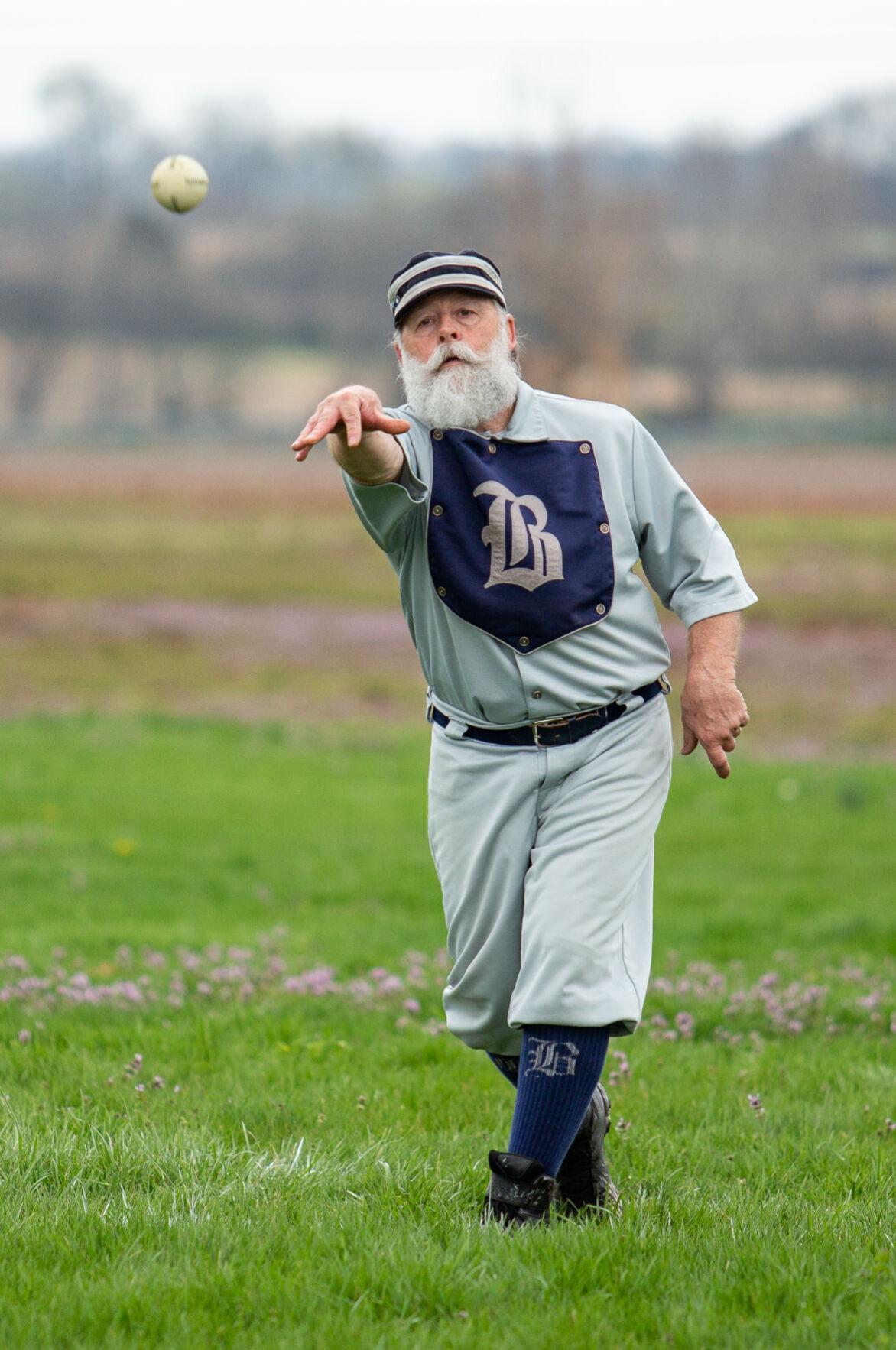 Ben "Pops" Clouse, coach and founder of the Lexington-based vintage baseball team the Bluegrass Barons, pitches during a doubleheader against the Canton, Mich., Cornshuckers at South Union Shaker Village in Auburn on Saturday, March 27, 2021. The Cantons won 18-3 against the Barons in the first game of the doubleheader. (Grace Ramey/photo@bgdailynews.com)

The Barren River District Health Department will now administer COVID-19 vaccines for people at least 18 years old in all eight of its county clinics.

“Other vaccine locations opening up around the area has really allowed us to open up our own availability to other groups,” BRDHD Director Matt Hunt said. “In the beginning, we vaccinated those who had a higher chance of facing complications, and we vaccinated that crowd really well. Now we can focus on those who have been waiting.”

Hunt said the clinics will be primarily administer the Moderna vaccine until they receive more shipments of the Johnson & Johnson one-dose vaccine.

If internet access isn’t available, appointments can be made by calling the health department at 270-781-8039 and then pressing option one.

“Hopefully this new development continues to slow the spread of the virus,” Hunt said. “So far we have administered 15,846 doses of vaccine to the public, and we will remain in this stage for the foreseeable future.”

Any resident in Barren, Butler, Edmonson, Hart, Logan, Metcalfe, Simpson and Warren counties can schedule to receive their vaccine in the county of their choice when registering.

Due to vaccine supply, vaccine clinics will occur on specific days for each county. Once the appointments are full for April, the agency will schedule appointments again in mid-April for the month of May.

To view all regional vaccination sites in the area, visit https://govstatus.egov.com/kentucky-vaccine-map.

Family: My mom, Wendy; my dad, Ajay; and my dog, Snoopy

The one thing nobody knows about me is ... despite its lack of popularity in the U.S., I’m a pretty avid Formula 1 fan and follow race weekends closely.

My dream job is ... not quite sure, but I’d like to go into something regarding the law or public policy. Creating a better and more equitable future through policy for those coming after me drives me to do what I do.

My first job was ... as an intern on Charles Booker’s 2020 Senate campaign.

The best advice I ever got was ... to keep on pushing no matter what gets thrown at me. There are too many losses and rejections to count behind every win I get, and if I had let that mountain of losses discourage me, I would be nowhere close to where I am today.

My hero and why is ... not a single person, but both of my parents. They helped instill the intrinsic drive I have today, and I wouldn’t have been able to do everything I do without their guidance, support and example they set for me.

If I could do it all over again, I ... would not spend so much time stressing over the little things; most of the minutiae seems to work itself out eventually.

The part of my job I could do without is ... definitely homework and deadlines, but I feel like that’s pretty universal among my peers.

The one thing I always carry with me is ... my phone, unfortunately, but such is life in a hyperconnected world.

The best meal I ever had was ... an Indo-Chinese dinner at a hotel in India when I was visiting my family. It was a lot of spicy, fried food, so it satisfied both the Desi and Southerner in me.

At the top of my bucket list is ... to be trilingual and travel the world. I’m learning Arabic at WKU right now, and I hope to learn another language once I graduate high school and go to college. Language is key to fully understanding a culture, so I hope to gain many new experiences and improve my language skills while (hopefully) traveling abroad. 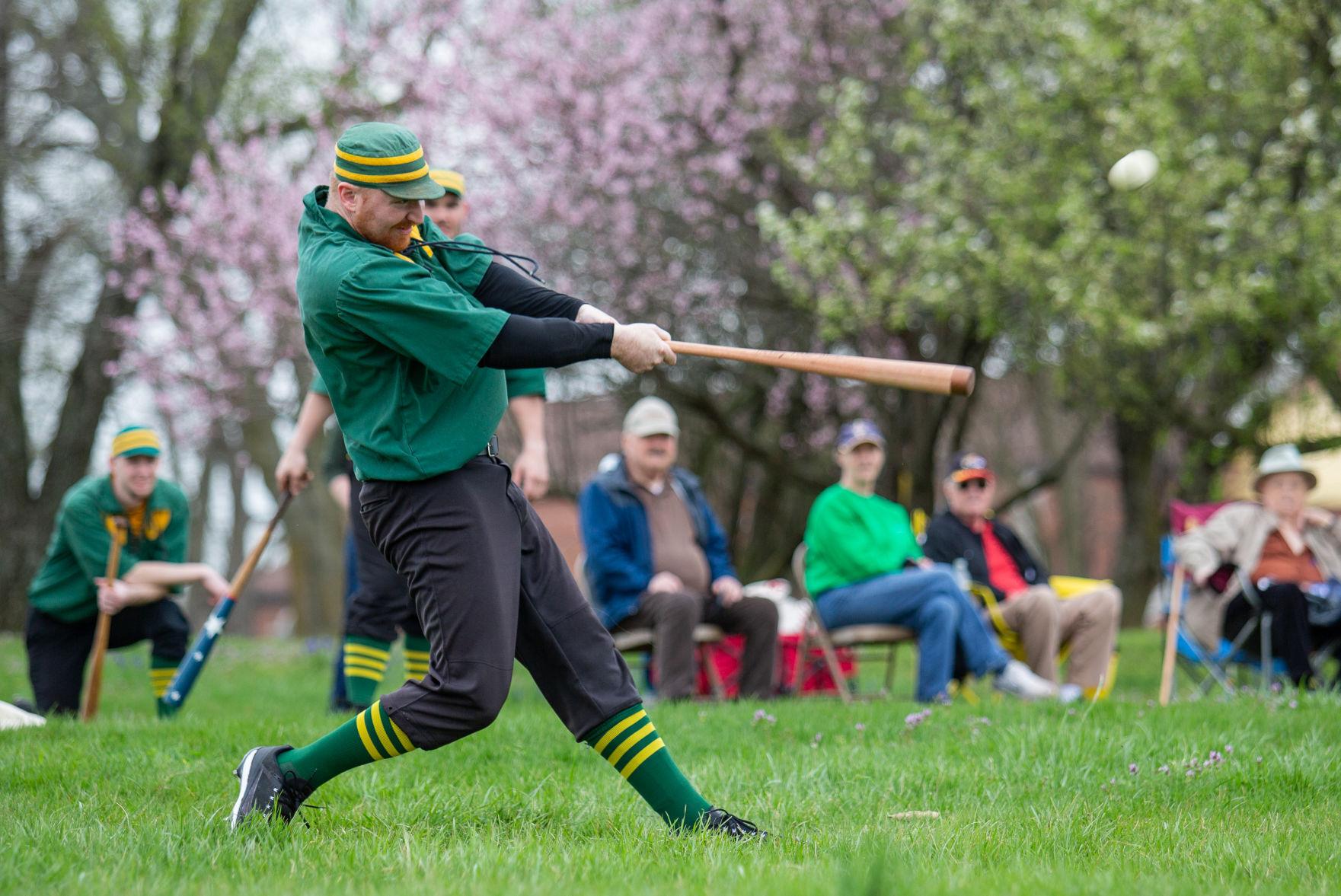 Ryan "Copper" Glaser of the Canton Cornshuckers, a vintage baseball team based in Canton, Mich., hits the ball during a doubleheader against the Lexington-based Bluegrass Barons at South Union Shaker Village in Auburn on Saturday, March 27, 2021. The Cantons won 18-3 against the Barons in the first game of the doubleheader. (Grace Ramey/photo@bgdailynews.com) 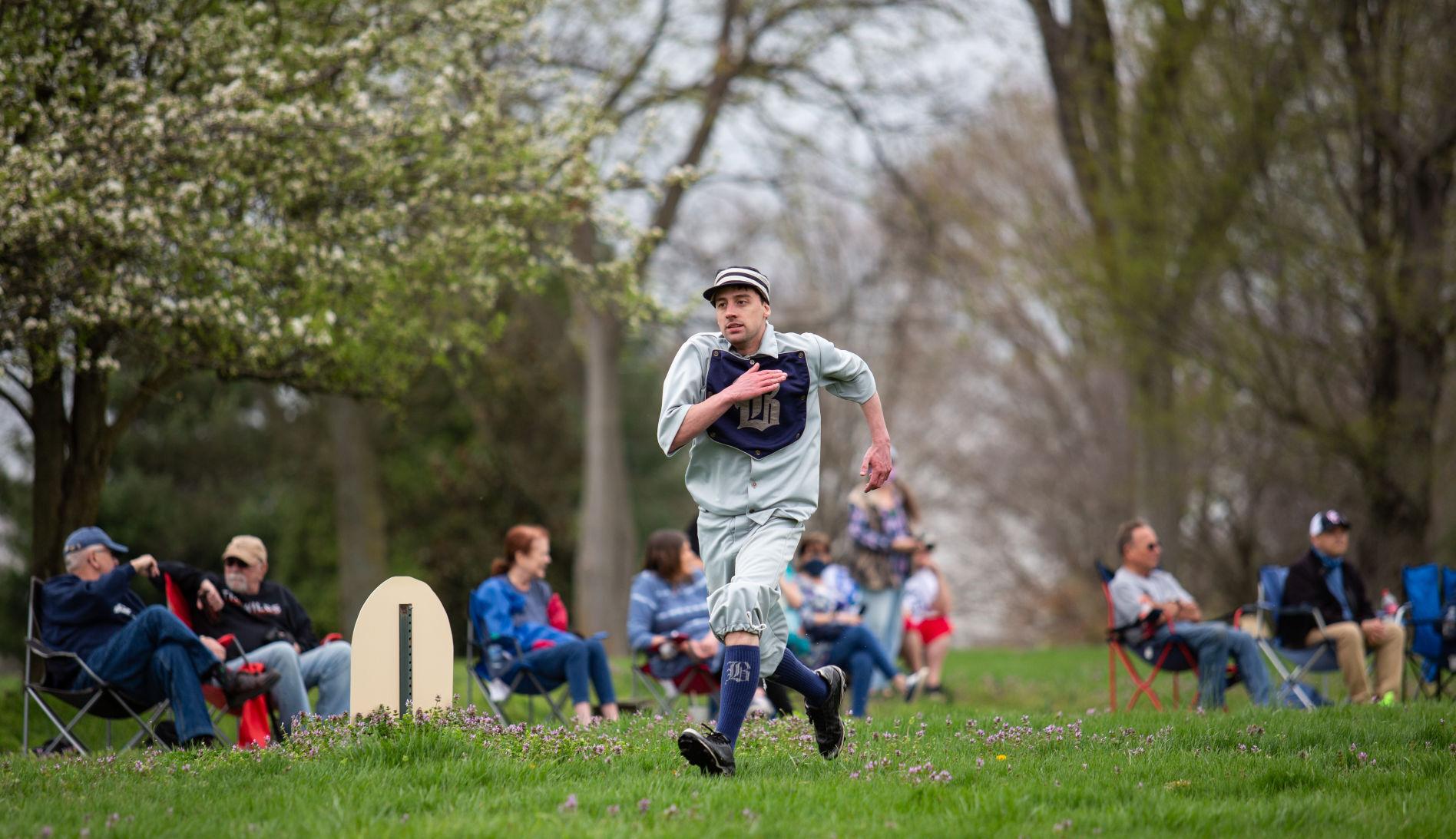 Alex "Capone" Clouse of the Bluegrass Barons, a Lexington-based vintage baseball team, runs to home base during a doubleheader against the Canton, Mich., Cornshuckers at South Union Shaker Village in Auburn on Saturday, March 27, 2021. The Cantons won 18-3 against the Barons in the first game of the doubleheader. (Grace Ramey/photo@bgdailynews.com) 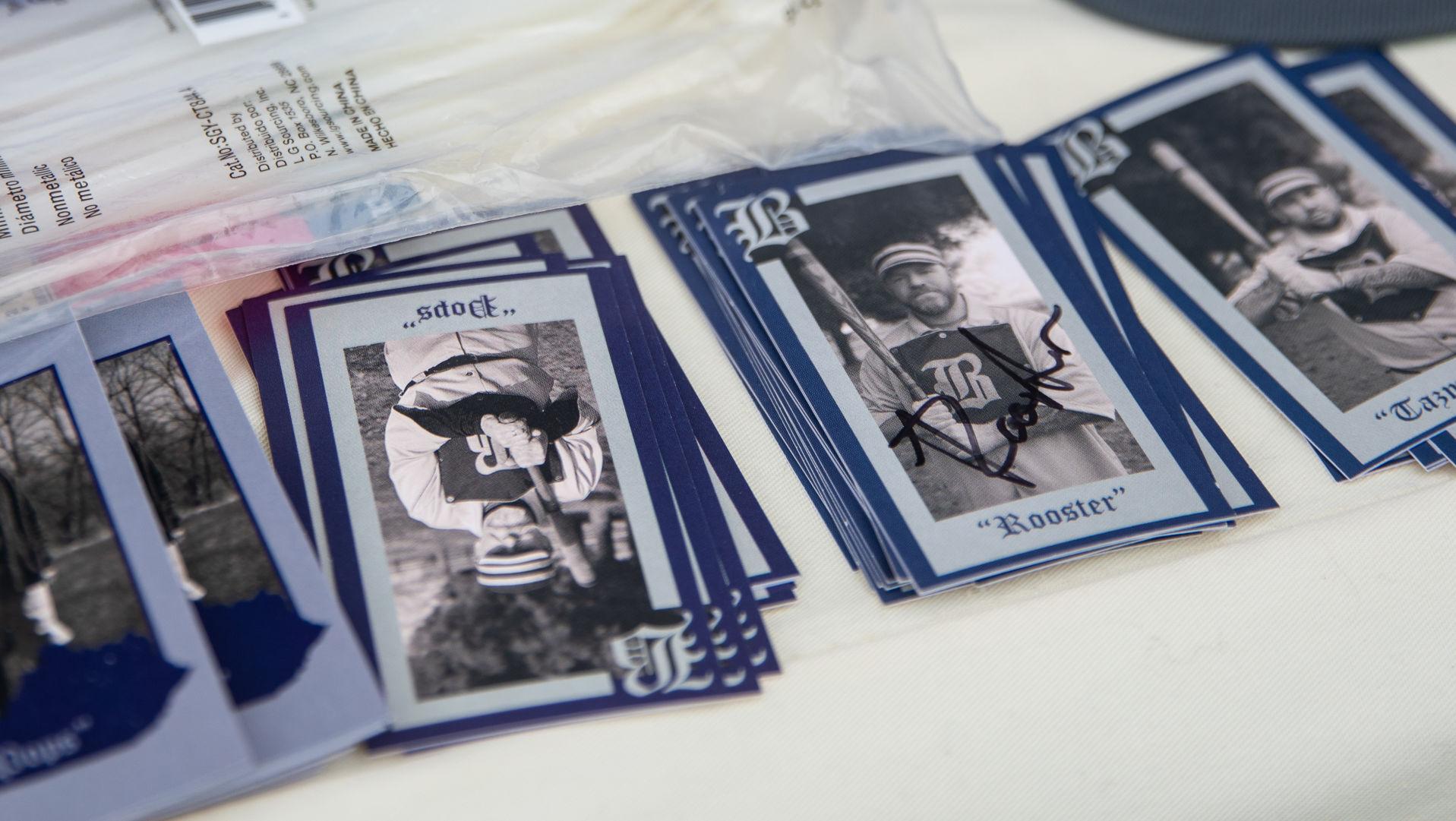 Autographed baseball cards of members of the Lexington-based vintage baseball club, the Bluegrass Barons, sit on a merchandise table during a doubleheader against the Canton, Mich., Cornshuckers at South Union Shaker Village in Auburn on Saturday, March 27, 2021. The teams play under rules from 1869 with vintage uniforms and equipment that would have been used in that era. (Grace Ramey/photo@bgdailynews.com)