A Bowling Green/Warren County Drug Task Force detective testified about his efforts to develop a suspect in an overdose death.

Boyd is charged in the overdose deaths of Joshua Kinkade and Matthew Dobring.

The detective described becoming involved in the investigation into Kinkade’s death, testifying about enlisting the cooperation of Kinkade’s brother, Matthew Kinkade, after a firearm was found in Matthew Kinkade’s room.

Kinkade testified Tuesday about his involvement in the investigation that resulted in the arrest of Stephanie Silvano, who provided information to law enforcement that enabled them to charge Boyd.

Bessette said he met with Matthew Kinkade to arrange a drug transaction with Silvano, who Kinkade identified as a possible source of drugs that contributed to his brother’s death.

The plan was to have Kinkade meet with Silvano to buy a half-gram of heroin using $100 provided by the drug task force, with detectives conducting surveillance and recording the transaction on audio and video, Bessette said.

The transaction was to have taken place in a parking lot in the 300 block of Old Morgantown Road.

Jurors were played audio and video footage Wednesday of the controlled drug buy and audio of phone calls between Kinkade and Silvano arranging the deal, which took place on the afternoon of Nov. 22, 2019.

Silvano is seen getting into a car driven by Kinkade and accepting money from him.

The vehicle is later stopped by police at Lampkin Park for a traffic violation, and an officer can be heard questioning Silvano, who denies having any drugs on her.

The officer is heard telling Silvano that he was involved in a prior drug investigation targeting Silvano earlier in the year and that detectives had been watching her the previous few days and observed “a lot of weird traffic” at her apartment.

Bessette testified Wednesday that Silvano was arrested that day and taken to the Warren County Regional Jail, only to be brought later to The Medical Center, where the detective questioned her in the presence of her attorney.

“I intended to try to get Silvano to cooperate with us,” Bessette said Wednesday.

As Bessette spoke with Silvano, other detectives set up surveillance at the section of Old Morgantown Road where the previous deal had taken place, with Bessette relaying information to them that Silvano provided.

Bessette said Silvano identified Scott Bernauer and a man she knew as “C” as people involved in the drug trade.

Silvano said she believed the first name of “C’ was Tracy, Bessette said.

“(Silvano said) she used to buy directly from ‘C,’ ” Bessette said. “After her arrest in June, ‘C’ became paranoid and wouldn’t deal with her directly.”

Detectives conducting surveillance of an Old Morgantown Road apartment eventually saw a red SUV and a white Audi leave the scene, and the vehicles were later stopped by police.

The red SUV was driven by Bernauer, while Boyd was driving the Audi, Bessette said.

Silvano and Bernauer have pleaded guilty to a count of reckless homicide in Joshua Kinkade’s death. 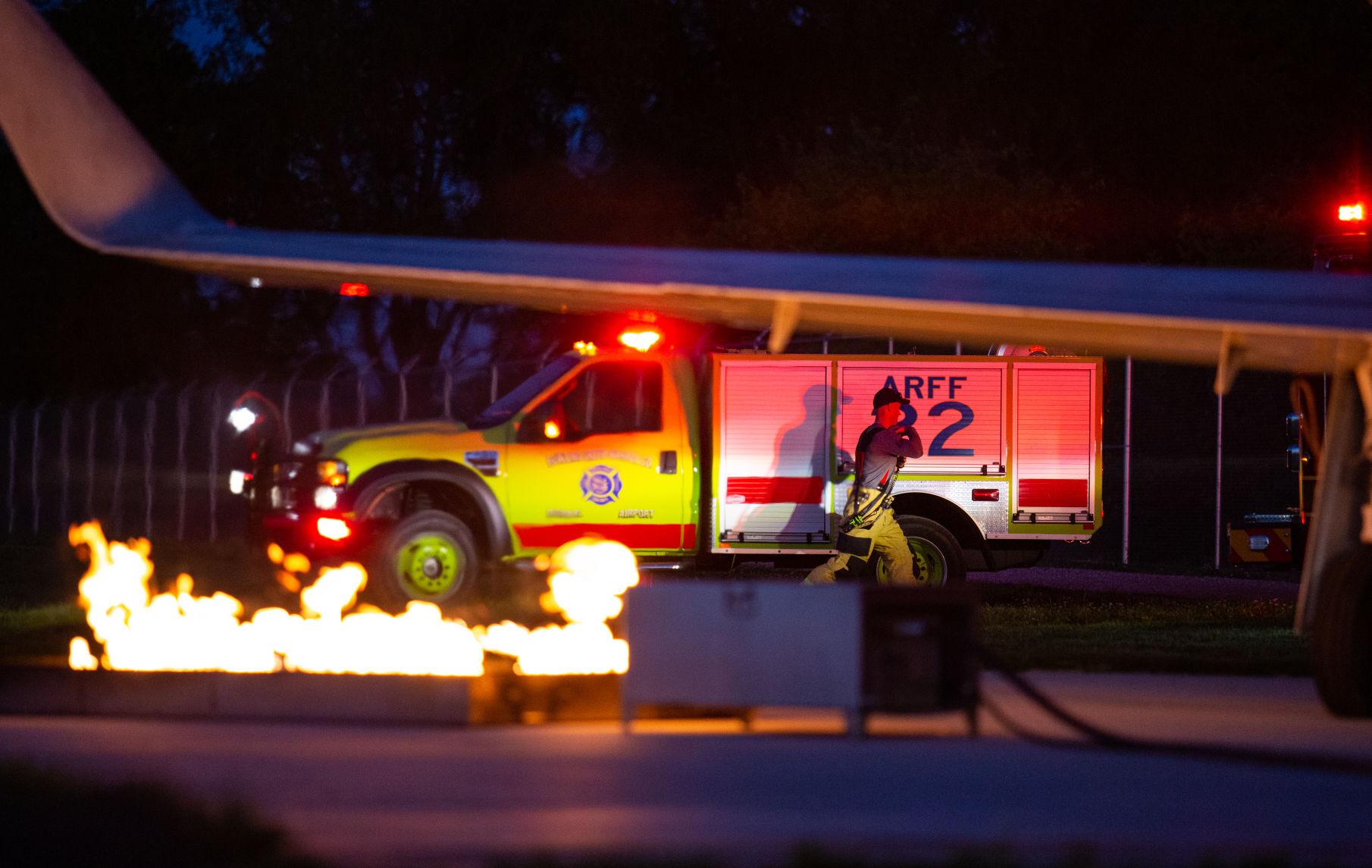 Bowling Green Fire Department firefighter Ryan Meredith arrives on scene of a controlled burn meant to simulate a break fire on a jet donated by the Bowling Green–Warren County Regional Airport to the BGFD during the department's annual Federal Aviation Administration Part 139 Fire Department Training Exercises at the airport on Wednesday, May 14, 2021. From Monday through Wednesday, all BGFD firefighters participated in the training exercises, including medical assists, potential fuel spills, controlled burns on aircrafts and tractor fires, to prepare for any incident that could potentially occur at the airport. (Grace Ramey/photo@bgdailynews.com) 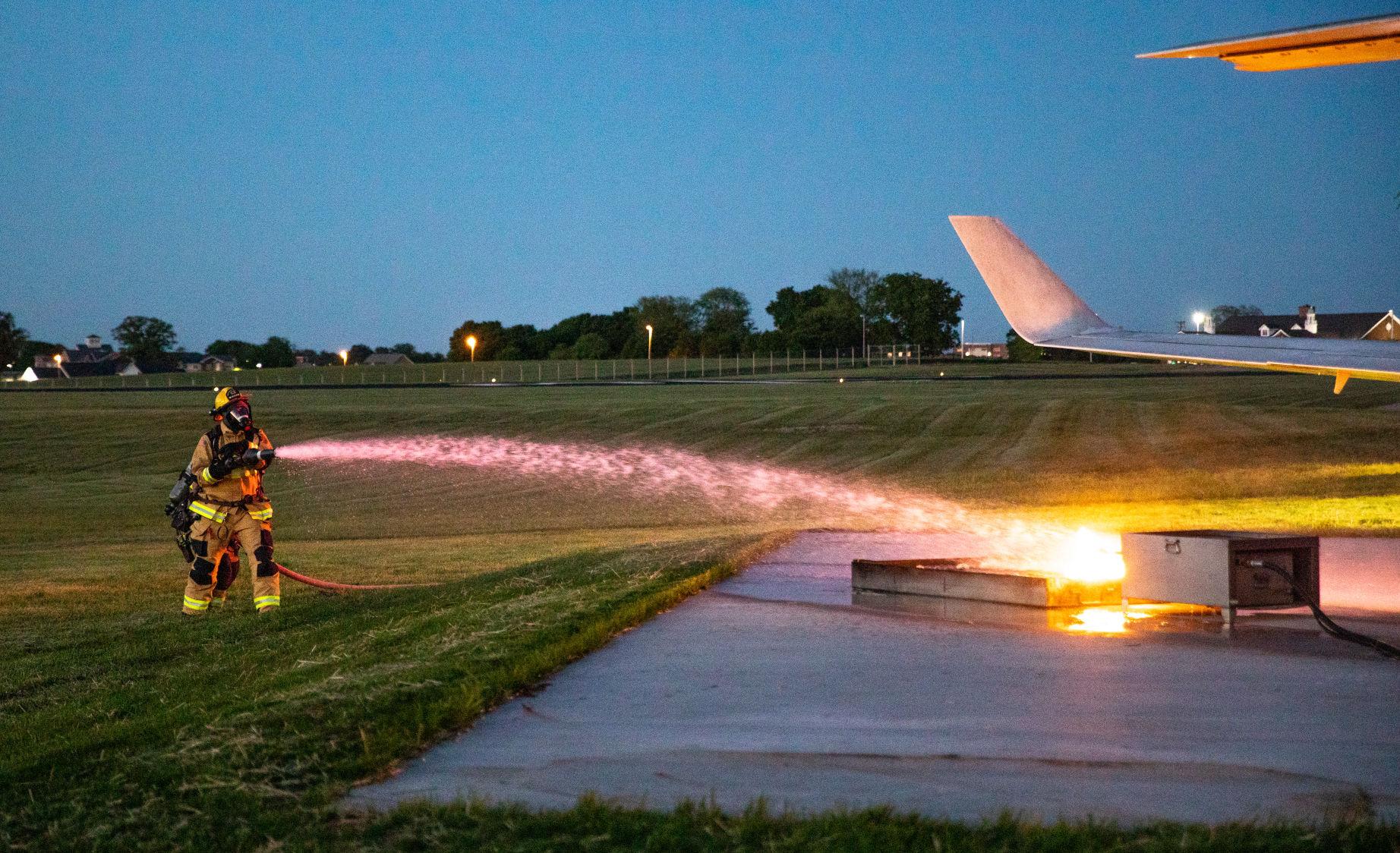 Bowling Green Fire Department firefighters Brad Caffey and Austin Conner spray water on a controlled burn meant to simulate a break fire on a jet donated by the Bowling Green–Warren County Regional Airport to the BGFD during the department's annual Federal Aviation Administration Part 139 Fire Department Training Exercises at the airport on Wednesday, May 14, 2021. From Monday through Wednesday, all BGFD firefighters participated in the training exercises, including medical assists, potential fuel spills, controlled burns on aircrafts and tractor fires, to prepare for any incident that could potentially occur at the airport. (Grace Ramey/photo@bgdailynews.com)

Lt. Gov. Jacqueline Coleman announced on Wednesday, May 13, 2021, that a $880,000 state grant that will go toward safety improvements around Bristow Elementary School, Warren East High School and the new Cumberland Trace Elementary School.

The first of those projects includes adding an “RCUT” intersection, or restricted crossing U-turn intersection, in front of Bristow Elementary.

Most of the grant will go toward the intersection, which Bristow Elementary Principal Chris Stunson said will make entering and exiting the school much safer for parents and students.

“When parents are arriving from the building and leaving, parents need to go in both directions,” Stunson said of the busy, four-lane highway. “As they leave the building, many times there are cars turning opposite directions trying to cross Louisville Road, trying to get to where they need to be, whether that be work or home.”

Designed to eliminate the need for drivers to make a left-hand turn against traffic, Stunson said the intersection improvement will move the lanes for legal U-turns further away from the elementary school’s entrance, “which would of course enhance student safety.”

The grant, which is through the Kentucky Transportation Cabinet, also means a new sidewalk and crosswalk will be added to Warren East Middle School and Warren East High School, with $55,000 in state funds allocated to that project. Students frequently visit convenience stores situated across the road from the high school and middle school, meaning that pedestrian crossings should soon by safer for them.

And at the new Cumberland Trace Elementary School, $75,000 will go toward adding a turning lane to help traffic flow and improve safety around the school, Coleman said.

Coleman touted the projects as indicative of Gov. Andy Beshear’s commitment to public schools in Kentucky.

“In order to have the type of state that we want, we have to invest in and honor our schools,” Coleman said. 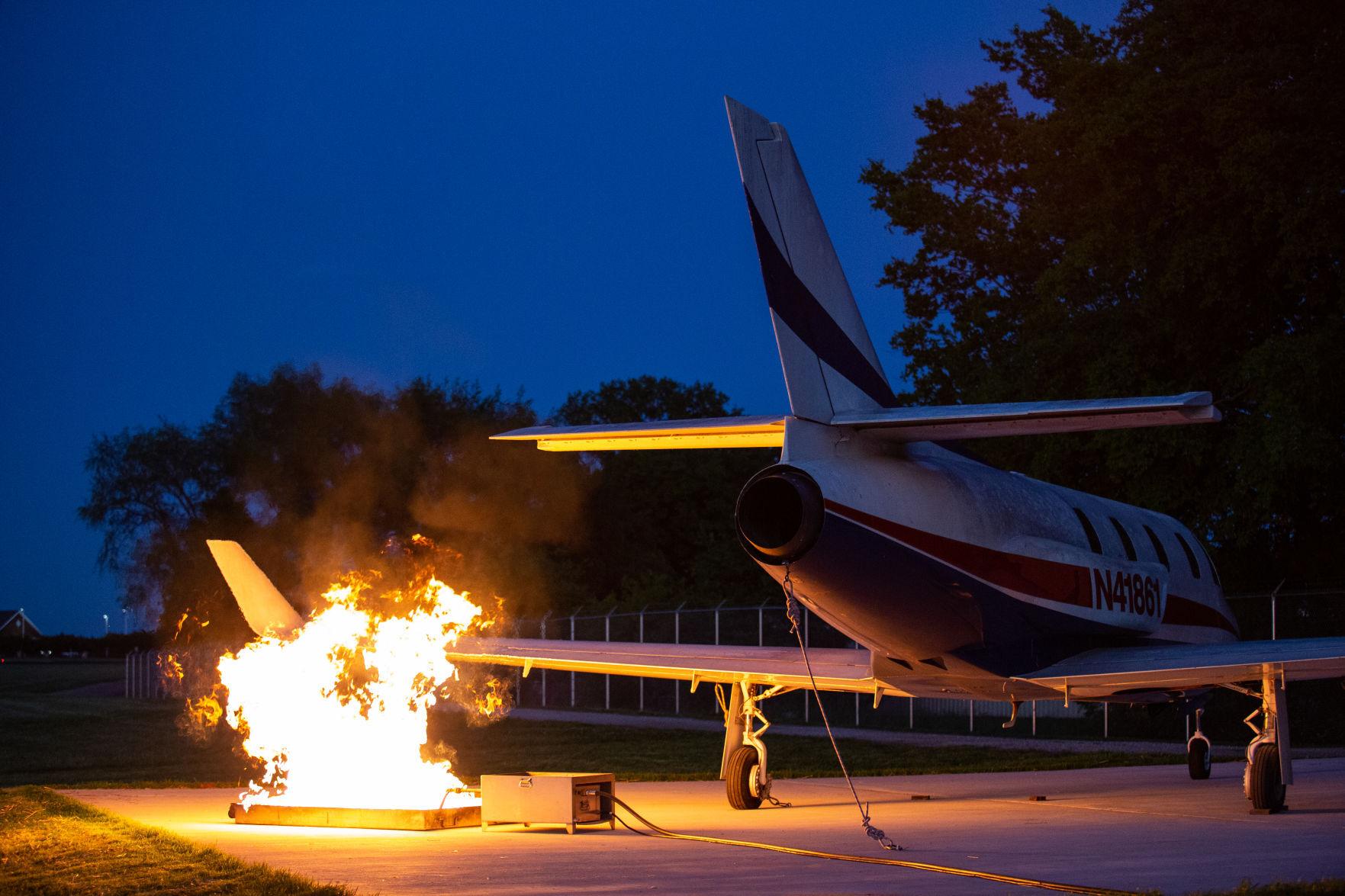 Crews from the Bowling Green Fire Department C Shift conduct their annual Federal Aviation Administration Part 139 Fire Department Training Exercises on Wednesday, May 14, 2021, at the Bowling Green–Warren County Regional Airport. From Monday through Wednesday, all BGFD firefighters participated in the training exercises, including medical assists, potential fuel spills, controlled burns on aircrafts and tractor fires, to prepare for any incident that could potentially occur at the airport. (Grace Ramey/photo@bgdailynews.com) 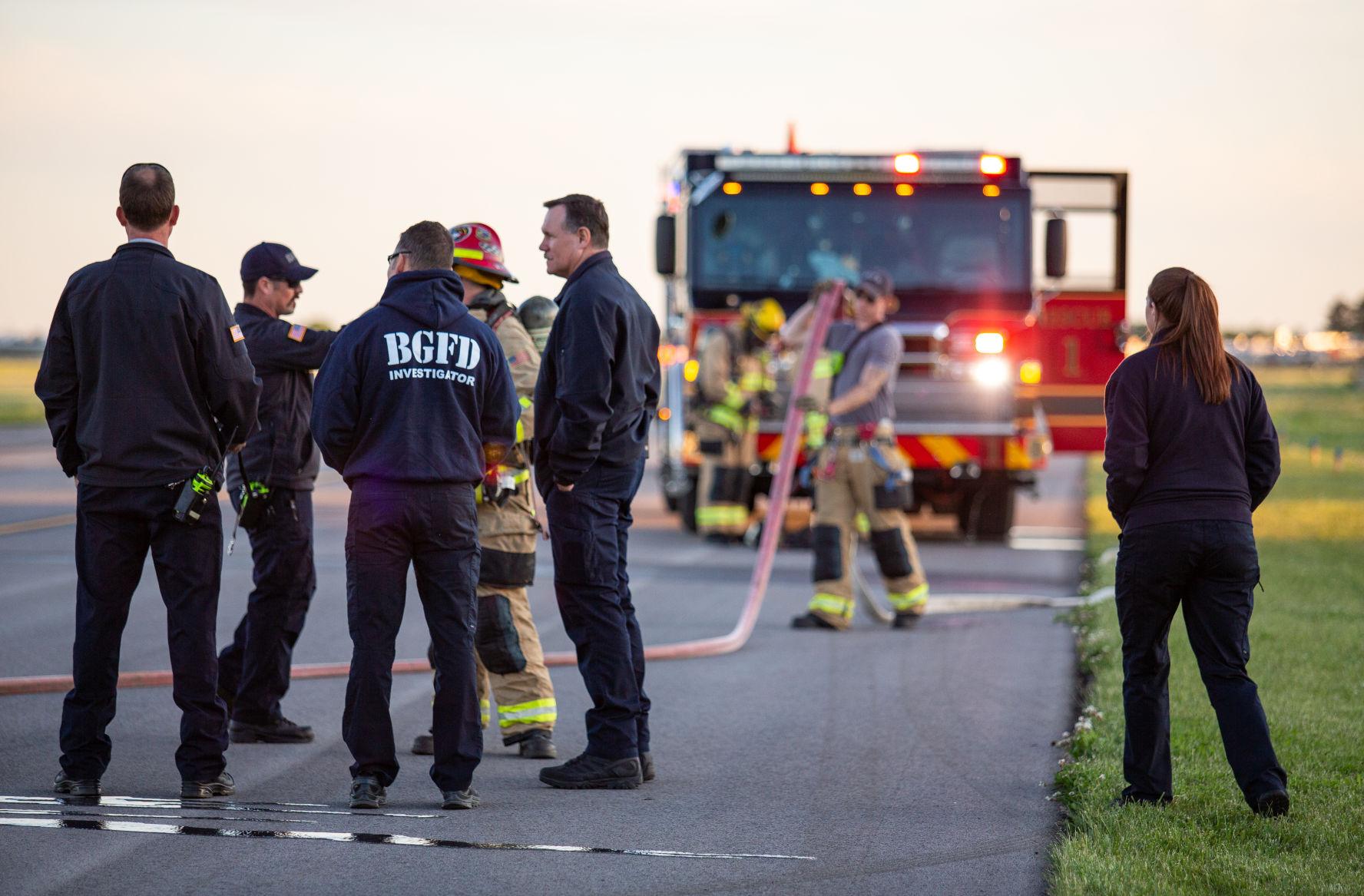 Members of Bowling Green Fire Department and Bowling Green–Warren County Regional Airport officials discuss after conducting a practice tractor fire during the department's annual Federal Aviation Administration Part 139 Fire Department Training Exercises at the airport on Wednesday, May 14, 2021. From Monday through Wednesday, all BGFD firefighters participated in the training exercises, including medical assists, potential fuel spills, controlled burns on aircrafts and tractor fires, to prepare for any incident that could potentially occur at the airport. (Grace Ramey/photo@bgdailynews.com)

Mayor Harold Armstrong asked City Attorney Danny Basil to read a letter from EPB interim Superintendent Melanie Reed regarding the new rate structure, which goes into effect June 1. The mayor said he thought the letter would answer questions several people have about the new electric rates.

In her letter, Reed said the new rate structure removes time-of-use energy and coincident demand peak charges for all residential and small commercial customers. These customers will be billed a fixed customer charge, which is a reduction from the current customer charge, along with a flat per kilowatt hour rate.

The time-of-use energy and coincident demand peak charges will be replaced with a flat seasonal rate of about 10.3 cents per kilowatt hour.

The time-of-use energy and coincident demand peak charges will be replaced with a flat seasonal rate of about 10.6 cents per kilowatt hour.

He also asked if the small residential customers would be incurring additional electric rates.

Armstrong said the Tennessee Valley Authority wasn’t willing to negotiate much on the new rate structure.

“If this had happened back two years ago, we would have seen a whole different idea. This is better than nothing. It’s helping the small user; the person who has been paying $115 (per month) will now not have that heavier charge,” he said.

There are plans to reduce the customer charge even further.

“This customer service charge, we wanted to drop it to $15, but TVA wouldn’t allow it to be dropped all of a sudden. So, it is going to be dropped gradually down to maybe $15,” said Councilman Marlin Witcher, who represents the city council on the GEPB board of directors.

Armstrong talked about specific groups, such as those who do not use a lot of power, including the elderly, who will benefit from the new rate structure.

“Hopefully, (it) will help bridge the gap on that small Social Security check that they are drawing. If they retired 20 years ago and they are 83 or 85 years old, they may not have had a retirement. I know several … who have a Social Security check to pay everything on $900 a month. You can’t pay utilities, groceries, medicine and all of that for $900. Those are the ones that $50 was literally killing,” he said.

Overall, Armstrong said the new rate structure was “a step in the right direction and we’ve just all got to support what they are trying to do, and hopefully, this time next year or the time year after, it will be to the point to where everybody is leveled out and nobody is getting killed and all this hearsay about ‘I’m selling my house. I’m moving to the county.’ That will go away.”

Councilman Patrick Gaunce questioned how much the EPB was in arrears.

The mayor made note of the availability of a federal grant the EPB could apply for to help with operating costs and said the Glasgow Water Co. is also pursuing it.

There were also questions from the city council about whether contributions would still be made to the Community Relief Fund of Glasgow Barren County Inc., a nonprofit organization that assists Glasgow and Barren County residents with rental and utility costs.

“We have since put $285,000 in Community Relief to help the people who don’t have anything to pay,” Armstrong said.

Councilwoman Marna Kirkpatrick asked about the vacant EPB board of directors’ seat. The EPB board has been operating with only four members but is supposed to have five.

“I’ve had several prospects, but I’m getting tired of bringing people up and you all voting them down,” Armstrong said.

After the new electric rate structure is implemented and “people can start seeing a difference and getting the sour out,” then maybe more people will want to step up and serve on the board, Kirkpatrick said.

Armstrong agreed that it was a possibility.