T.C. Cherry Elementary first grader Mia King goes down the slide on the school's playground during recess on Wednesday, Sept. 23, 2020. The school plans to add accessible playground equipment after receiving a recent grant award from the WHAS Crusade for Children. (Grace Ramey/photo@bgdailynews.com)

T.C. Cherry Elementary first grader Aniyah Miller goes down the slide on the school's playground during recess on Wednesday, Sept. 23, 2020. The school plans to add accessible playground equipment after receiving a recent grant award from the WHAS Crusade for Children. (Grace Ramey/photo@bgdailynews.com)

T.C. Cherry Elementary first grader Jacobe Branham goes down the slide on the school's playground during recess on Wednesday, Sept. 23, 2020. The school plans to add accessible playground equipment after receiving a recent grant award from the WHAS Crusade for Children. (Grace Ramey/photo@bgdailynews.com)

As a special education teacher at T.C. Cherry Elementary School, when T.J. Meguiar watches students frolic on the playground and then looks to her disabled students who can’t fully join in, her heart sinks.

“When you know them personally and you see them every day ... not being able to participate, it touches your heart,” Meguiar said.

That started to change after a bit of serendipity while touring a Meade County school one day. Meguiar was visiting the school to learn about its teaching methods, but she was enthralled by its playground, which featured several pieces of handicapped-accessible equipment.

After asking a teacher there, Meguiar learned the change was made possible by a grant, a discovery that led her to help secure $20,000 from the WHAS Crusade for Children.

Meguiar said the school is now looking at purchasing several handicapped-accessible pieces, including a 10 spin with seating for children of all abilities, outdoor musical equipment and a “pull along,” which combines a half-moon shaped tube and low-hanging monkey bars to help build upper body strength.

“We wanted to create an environment where the students didn’t have to get so creative,” said Rebecca King, a counselor at T.C. Cherry Elementary who collaborated with Meguiar in writing the grant.

The effort had been months in the making, King said. Both King and Meguiar interviewed for the award in the spring, but they did not learn that their school would receive it until recently, she said.

It’s not clear when the new equipment will be available for students, but school staff are excited for the addition.

“Our hope is just to expand the accessibility for all students to be able to play together inclusively,” King said.

Sam Bush performs at the 2016 Bonnaroo Music and Arts Festival in Manchester, Tenn.

Headlined by Bowling Green natives and founding members Sam Bush and Curtis Burch, the band New Grass Revival will be inducted into the International Bluegrass Music Association’s Hall of Fame in a virtual ceremony Thursday.

Joining the band in this year’s hall of fame class are the Johnson Mountain Boys and Station Inn owner/promoter J.T. Gray.

The group will be enshrined in Owensboro, home of the IBMA Hall of Fame.

“It is a real honor,” Bush told the Daily News. “Hearing the news was quite overwhelming for someone who grew up on the outside of Bowling Green on a tobacco and cattle farm.”

New Grass Revival is recognized widely as one of the most progressive voices in the history of Bluegrass as its famous brand of music called Newgrass blended a number of musical genres. The band defined its game-changing style by playing contemporary music on Bluegrass instruments.

The band got its start in 1971 after founding members Bush, Burch, Courtney Johnson and Ebo Walker moved to Louisville to begin their careers.

In 1975, the band moved to Barren County, which was the home of Johnson. After the move, they spent the next few years opening for Leon Russell.

As their fame grew, the band anchored some of the largest festivals in the country including the Telluride Bluegrass Festival in Telluride, Colo.

Their final appearance together was opening for The Grateful Dead at the Oakland Coliseum in San Francisco on New Year’s Eve 1989.

During its existence, the band produced nine studio albums and two live albums. They received both best band and best album awards in 1988 from Fret Magazine and placed on the Billboard Top 100 six times and the Top 40 one time with “Callin’ Baton Rouge.”

Bush credits a variety of artists as his and the band’s major influences.

“We were honestly influenced by people who had already changed Bluegrass music,” Bush said. “Of course, the father of Bluegrass, Bill Monroe, played a large part in our music, but we were also influenced by famous rock artists of the time such as Eric Clapton and Jefferson Airplane.”

Bush was a part of the 1970 Warren Central High School graduating class where he said school band director George Mills was his first major musical influence.

The now 68-year old Bush started playing music at 18 and never stopped over the last 50 years. Now, the musician headlines his own band aptly named The Sam Bush Band, which also specializes in Newgrass.

“The entire music business has been on hold right now due to the COVID-19 pandemic,” Bush said. “Right now, I’ve been doing some socially distanced shows, and our next one is on Oct. 26 in Virginia. I’m just fortunate this hall of fame ceremony is still actually happening.” 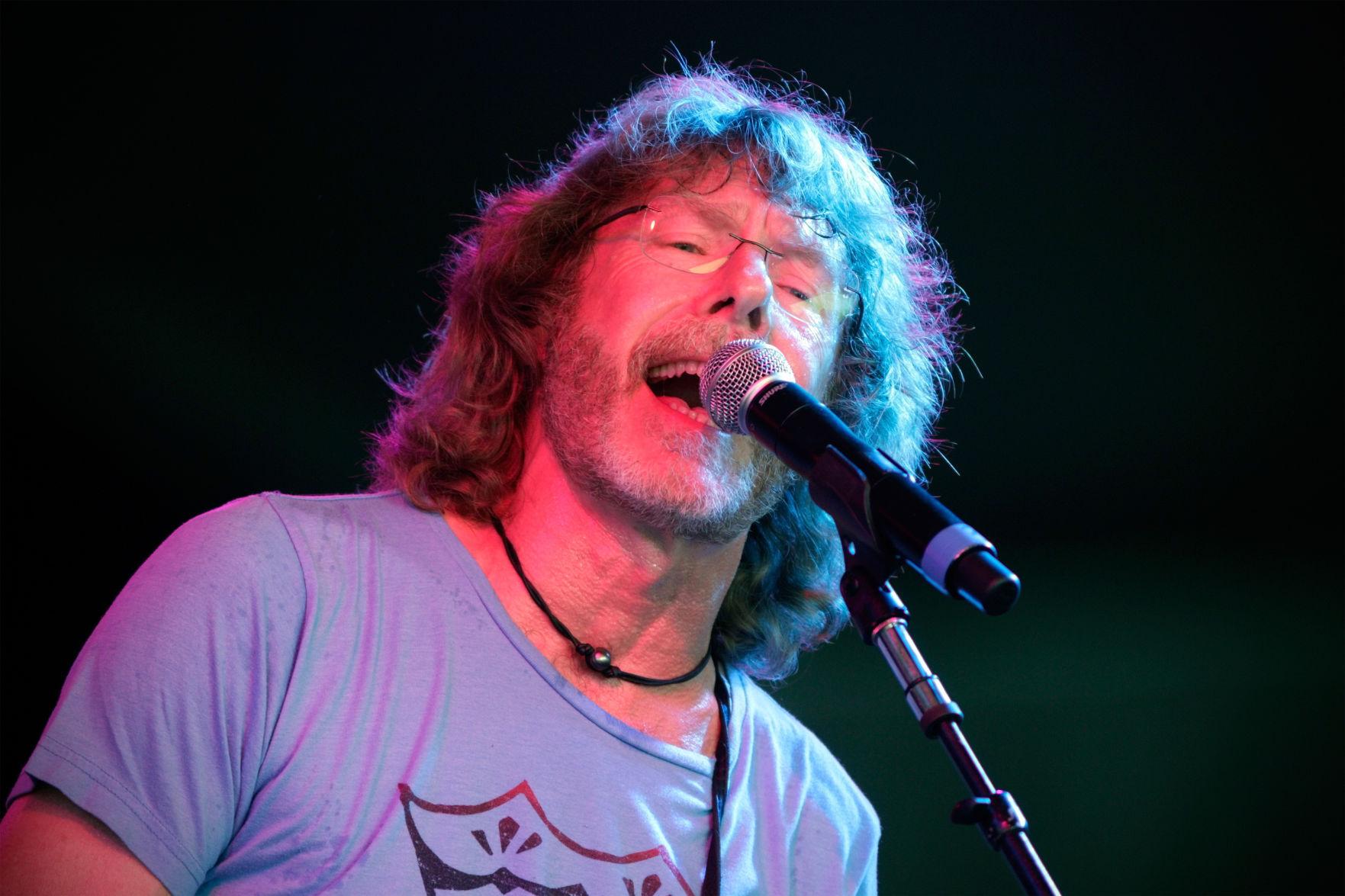 Sam Bush performs at the 2016 Bonnaroo Music and Arts Festival in Manchester, Tenn.

Logan and Todd counties will receive a $13.5 million federal infrastructure investment for the U.S. 79 Bridge Replacement Project that will replace and widen four bridges on the highway between Russellville and Guthrie.

“We were obviously very pleased to receive this investment,” said Tom Harned, executive director of the Logan County Economic Alliance for Development. “We were able to partner with Todd County to receive this grant for improvements that we estimated were very needed.”

Two of the bridges are in Logan County, and the other two are in Todd County.

Harned said the four bridges along U.S. 79 were all built in the late 1930s and are too narrow for the larger vehicles of today.

“There are safety problems with these bridges, and they are dangerous as presently constructed,” he said.

U.S. 79 is an important highway as it is the primary traffic artery between Russellville and Clarksville, Tenn. Traffic from Fort Campbell often comes through this road as well.

“KYTC is very excited about this opportunity,” Plunk said. “This grant gives us the green light to begin all of our plans. This is a great example of two communities coming together to recognize and achieve a common goal. Both counties going in on this grant together is why this project was set in motion.”

Plunk said funds must be authorized and bid on by September 2022, which means that the earliest date for completion of all four bridges will be spring 2023.

For the bridges in Todd County, one is over the CSX Railroad and the other is over Elk Fork Creek.

In Logan County, one bridge is over Vick’s Branch Creek and the other is over Whippoorwill Creek.

A news release said this project is intended to help decrease crashes. Replacing the bridge over the railroad with a bridge that has a higher clearance will also meet CSX’s current railroad design policies.

Wider, more modern bridges are needed to support industries in the area. Replacing the bridges in a controlled project will allow traffic to continue traveling along U.S. 79, thereby avoiding detours, the news release said.

An M3 Stuart tank fires a blank round during battle during a World War 2 Operation Anvil re-enactment on Saturday, Sept. 28, 2019, at Phil Moore Park. (Austin Anthony/photo@bgdailynews.com)

Bowling Green will go to battle Saturday, all in the name of providing a living history lesson and honoring military veterans.

“Operation Anvil,” a World War II reenactment of battles in southern France that allowed U.S. and Allied forces to liberate that country from Nazi Germany in 1944, will be staged in the large field across Scottsville Road from the Phil Moore Park gymnasium and baseball fields.

Ron Cummings, a local Realtor and executive director of the Honoring our Heroes nonprofit organization that is organizing the event, said he is expecting more than 100 reenactors and plenty of WW II-era military hardware to be on display in mock battles that will take place at 10 a.m. and 2 p.m.

“This is sort of like a living history event,” Cummings said of the event that is free to the public and being held for a second straight year. “We’ll have people coming from at least six different states, and we should have a good amount of armor there.”

Although the tanks and artillery will be firing blanks, Cummings cautioned that the mock battles will be noisy.

“It will be extremely loud,” Cummings said. “When you’re there you’ll think this is a real battle. You may want to bring earplugs or some sort of ear protection.”

Cummings hopes to not only raise the decibel level but raise awareness of the contributions and sacrifices made by military veterans. He said a ceremony honoring all military veterans present will be held after Saturday’s first battle.

“To me, that’s the highlight of the day,” Cummings said. “Last year we recognized 74 veterans. We will honor anyone who served in the military, but we hope to have a couple of World War II veterans there.”

Cummings said the event will give those attending an opportunity to view some historic military hardware.

“After the second battle, people can talk to the reenactors and see the equipment up close,” he said.

Cummings said spectators will see some differences in the event this year because of the coronavirus pandemic.

“We’ll keep the overall crowd below 600 people per battle,” he said. “We will elongate the battlefield to spread people out. We have more than 100 acres to work with.”

Unlike last year, spectators will not be able to watch the mock battles from bleachers because of social distancing restrictions, but Cummings said “some people should be able to stay in their cars and watch the battles.”

Because of the absence of bleachers, Cummings advises spectators to bring their own lawn chairs and be prepared to wear face masks.

“We’ll be following all the guidelines we’ve been told to follow,” he said.

More information about “Operation Anvil” can be found at the website for the Third Division, Fifth Regiment reenactment group based in Louisville.