News
Winter Room in the Inn program starts this week

Just as nighttime temperatures have started to dip below freezing, a coalition of Bowling Green churches is gearing up to provide shelter and warm meals for people who often spend their nights on the street.

Room in the Inn, a ministry to the homeless that was launched by the Homeless and Housing Coalition of South Central Kentucky in 2014, begins its eighth winter season this week and will continue each night through March 15.

More than a dozen local churches are involved, with each either providing shelter and meals or transportation to each night’s location.

The program, which has had its headquarters in the former Red Door Puzzle Rooms business at 1033 U.S. 31-W By-Pass since 2019, had grown steadily until the coronavirus pandemic limited the numbers last winter.

Room in the Inn provided more than 2,300 bed nights in the 2019-20 season, but Room in the Inn board of directors Chairman Doug Depp said the numbers were down last year.

Although COVID-19 cases are waning, Depp said the illness remains a concern that will affect how individual churches handle the homeless ministry.

“Some churches didn’t participate last year, and some are opting out this year, too,” Depp said. “A lot of the people who volunteer are older, so they are electing to sit out this year and wait for things to die down.”

The lingering threat of COVID-19 will also have an impact on how Room in the Inn operates at its headquarters and how individual churches handle their homeless guests this winter.

Depp said Room in the Inn will follow U.S. Centers for Disease Control and Prevention guidelines on social distancing and mask-wearing at the headquarters building where the homeless congregate each evening before being transported to the church that is providing an evening meal and a place to sleep.

“We’ll also offer COVID-19 testing once a week on Mondays,” Depp said. “It’s not mandatory, but we’re strongly encouraging it.”

Depp said Room in the Inn volunteers can also get tested at the headquarters building, but he said COVID-19 protocols could vary from church to church.

As in years past, the number of available cots for sleeping can vary from night to night and Room in the Inn may not always be able to accommodate everyone.

“Each night is a different setup,” Depp said. “If 15 beds are offered and we have 20 people show up, we go to a lottery system.”

In recent years, Depp said, there have been nights when 30 or more homeless people needed shelter.

Accommodations for COVID-19 won’t be the only changes coming to Room in the Inn this season. The organization is looking for a new coordinator to oversee the program after Sharli Rogers retired from that position earlier this year.

“Once the season gets started, we’ll go back to looking for a new coordinator,” Depp said.

People interested in volunteering for Room in the Inn or donating to the organization can go to the roomintheinnbg.org website or visit the Room in the Inn Bowling Green Facebook page. 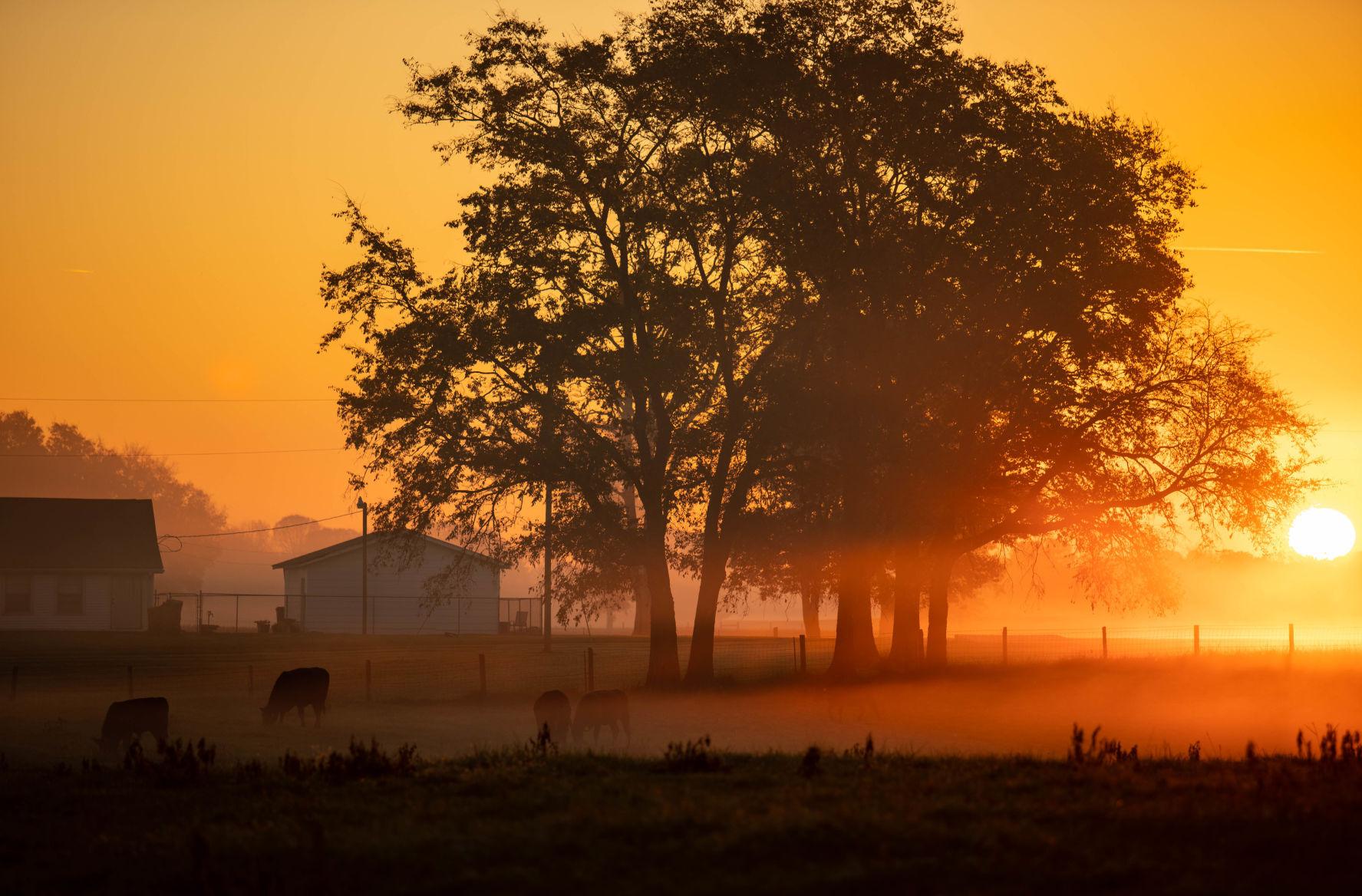 The sun rises on a farm north of Bowling Green on Wednesday, Nov. 10, 2021. For additional photos, go to bgdailynews.com.

A volunteer loads food into a car at an Armed Services YMCA food distribution, Oct. 28, 2021, in San Diego. As many of 160,000 active duty military members are having trouble feeding their families, according to Feeding America, which coordinates the work of more than 200 food banks around the country. (AP Photo/Gregory Bull)

Western Kentucky University is launching an initiative to look after a significant though often overlooked constituency on campus: students who are the first in their families to attend college.

Also called first-generation college students, the demographic makes up more than a third of the university’s undergraduate student population. That means it’s vital for WKU to keep as many as possible – especially given the steady decline in enrollment it’s been experiencing for nearly a decade.

To that end, WKU is calling on faculty and staff who were themselves first-generation college students to share their experiences and act as mentors.

Having that kind of support to lean on is crucial, WKU Provost Robert “Bud” Fischer told the Daily News.

Without someone knowledgeable and connected in their corner, those students are often retained at lower levels and have lower graduation rates.

“They don’t have as wide of a perspective on what college is and how to succeed in college,” Fischer said of first-generation college students. “What I hope this does as we build it out is give them the tools to be able to be successful to make the transition from high school to college, but also to be successful in college as time goes on.”

To accomplish that, WKU’s First-Generation Faculty and Staff Initiative will invite campus employees to create video testimonials sharing their experiences as a first-generation college student and attend social networking events geared toward that community.

The project will also aim to build a directory of first-generation faculty and staff at WKU and encourage those employees to place special stickers on their offices and email signatures marking them as a champion of that constituency on campus.

By pairing first-generation college students with faculty and staff who’ve been in their shoes, Fischer said he hopes the students will see that “they’re not alone” and that “these faculty (and staff) have gone through the same challenges, and that they can help them succeed.”

Like for any mother, weekday mornings for Kimberly Parsley are focused on the mad dash of getting her two children out the door to school.

Her husband, Michael Parsley, works alongside his wife to make sure their kids, Ian and Sayer, are fed and fully prepared for the day.

It’s not until the children have left the house that Kimberly Parsley’s everyday life begins to differ from that of most parents.

For the Morgantown native and current Bowling Green resident, many days are filled with doctor’s appointments, physical therapy and using special technology to do life’s everyday tasks.

Kimberly Parsley has a genetic condition called von Hippel-Landau (VHL) disease, which is characterized by blood vessel tumors in up to 10 areas of the body. These tumors can be benign or cancerous.

The condition has left her blind in both eyes since she was 14.

In 2016, a tumor on her spinal cord caused her to lose control of her left arm, and in 2019 another tumor removed from her brain stem left her with severe balance issues.

Despite these bumps in the road, Kimberly Parsley has authored a handful of fantasy novels, but more importantly, she has successfully raised a family with her husband.

She recently described her life’s journey in the new book “A Celebration of Family: Stories of Parents with Disabilities” published by the Center For Accessible Living.

“I am always thrilled when people’s unique experiences get to be talked about,” Kimberly Parsley said. “So many times, we think we are alone, and then you read these stories. One story can make someone realize they aren’t alone.

“It’s very important to help you get through a struggle that other people have been there and gotten through it,” she said. “Representation is important. There is so much in this book, and there is so much about the disability movement.”

Not too long after becoming blind, Kimberly Parsley graduated from Western Kentucky University, where she earned a degree in public relations in 1997 and met her eventual husband.

The couple continued to live in Bowling Green, where she worked in WKU’s university relations department. She eventually decided to quit her job and stay at home to take care of her children. Her son Ian is now 13 and her daughter Sayer is 10.

“It’s fortunate my kids are older now and they can do more things for their selves,” Kimberly Parsley said with a laugh. “Being blind and having little children is exhausting. My daughter was a climber so there was a lot of worrying about that.”

She said her full-time job now is managing her chronic illness and going about her daily life from her physical therapy sessions and doctor’s appointments to reading books and playing with her three pets.

Thanks to different braille and audio programs on her iPhone, Kimberly Parsley can still read many books and enjoys watching TV.

However, she said the technology she uses each day is an expensive necessity. The issue of health insurance casts a long shadow.

“Insurance will elicit a groan from anyone who reads or hears that word,” Kimberly Parsley said. “We have all struggled with the pain that is dealing with an insurance company, and it shouldn’t be that way. We should all contact our local officials about this issue and fight for better coverage. I feel very strongly about this.”

After the children return home for school, Michael Parsley will usually cook dinner for the family while Sayer sometimes helps with the cooking.

Then, she will make up stories to tell her children or she will come up with new games to play with them.

Due to her multiple disabilities, she can no longer write her fantasy novels. She now refocuses that imagination to spend quality time with her kids.

Unfortunately, she says one of her children has VHL as well, and the family is soon leaving town for a VHL-related procedure in Houston.

Center for Accessible Living Program Coordinator Dave Matheis said it’s not uncommon for some genetic conditions to be passed down.

Matheis came up with the idea for “A Celebration of Family: Stories of Parents with Disabilities” and is the book’s editor.

He has known Kimberly Parsley for more than 25 years.

“It’s a decision some folks have to make if the disorder is inheritable,” Matheis said. “Two people in my book decided to have children, and another one didn’t. It’s a personal decision.

“I’ve known her since she was a teenager,” he said of Kimberly Parsley. “She was just going blind then. Kim is a very sharp lady. She is very determined, and she has been through a lot of difficulties with her disability.”

She commended Matheis for his hard work putting the book together and spoke to the importance of dozens of stories detailed.

“I feel like people think if you are disabled, you can’t have kids,” Kimberly Parsley said. “And that’s not the case. I was thrilled to take part in this project. I want people to know that there are people out there doing it, and it can be done. It is scary, but it absolutely can be done.”

The book can be purchased on Amazon.com, and further information on VHL can be found at www.vhl.org.

Click and hold your mouse button on the page to select the area you wish to save or print. You can click and drag the clipping box to move it or click and drag in the bottom right corner to resize it. When you're happy with your selection, click the checkmark icon next to the clipping area to continue.