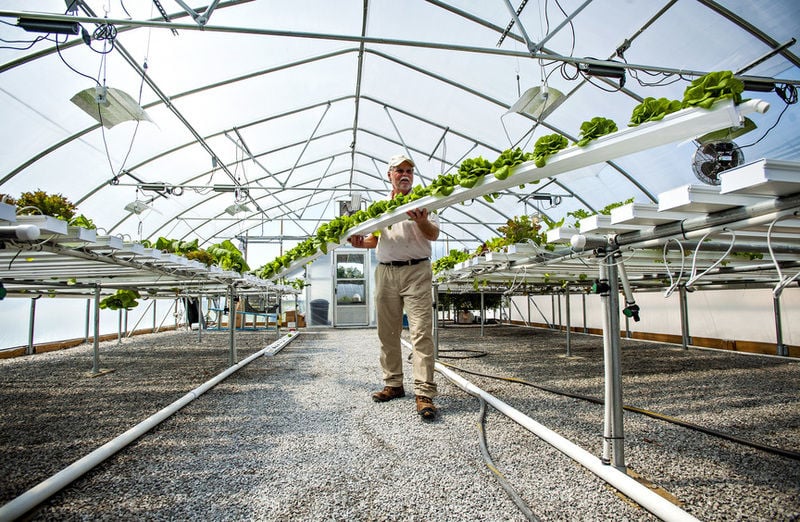 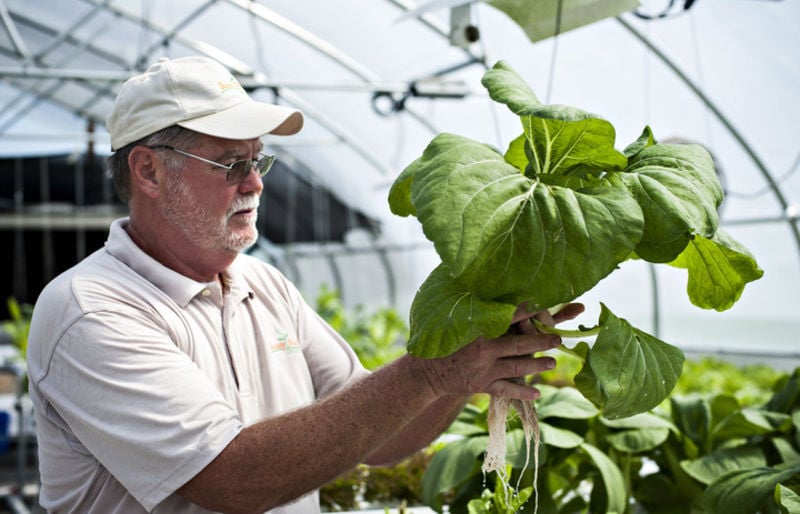 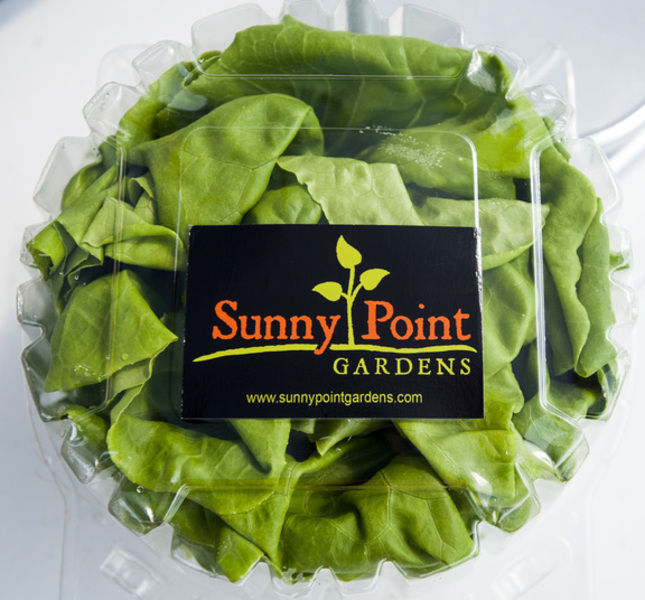 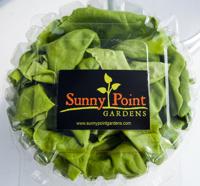 Bibb lettuce in the hydroponic greenhouse is placed in a plastic clamshell after being harvested at Sunny Point Gardens on Friday, Aug. 29, 2014, in Edmonson County. (Miranda Pederson/Daily News) 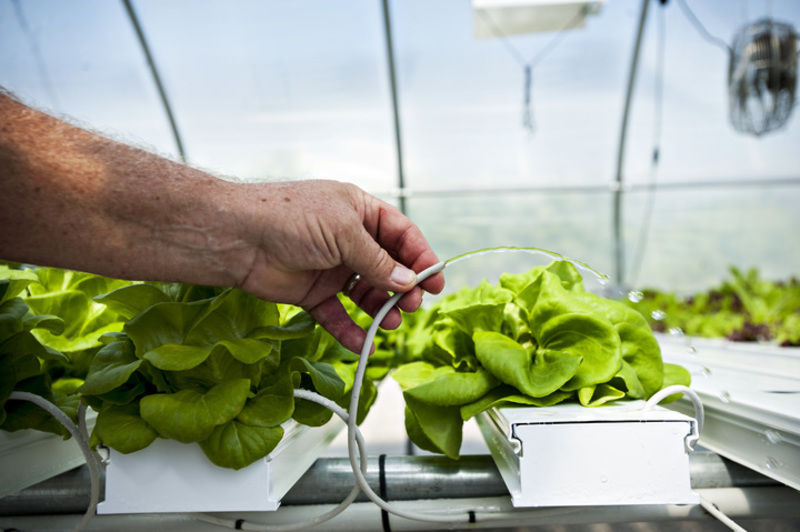 Water with nutrients fills trays of lettuce as a growing medium, replacing soil in the hydroponic greenhouse at Sunny Point Gardens on Friday, Aug. 29, 2014, in Edmonson County. (Miranda Pederson/Daily News) 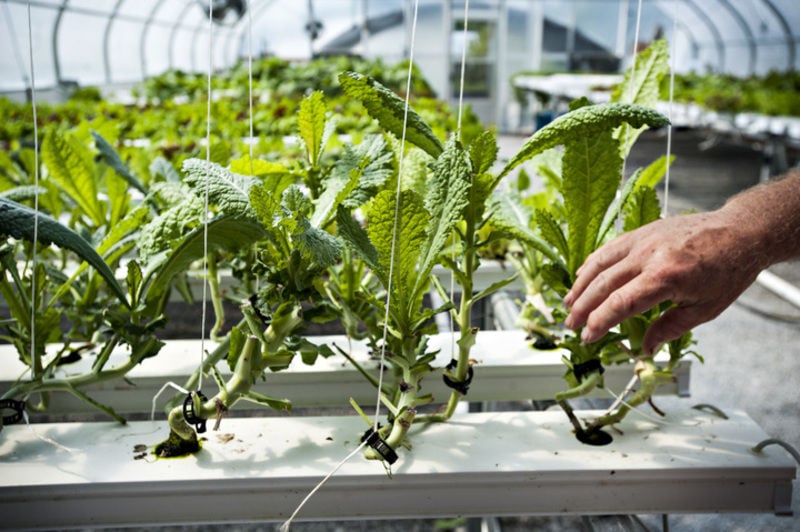 Miranda Pederson/Daily News Green leaf lettuce is held up by string Friday after individual leaves are harvested in the hydroponic greenhouse at Sunny Point Gardens in Edmonson County. 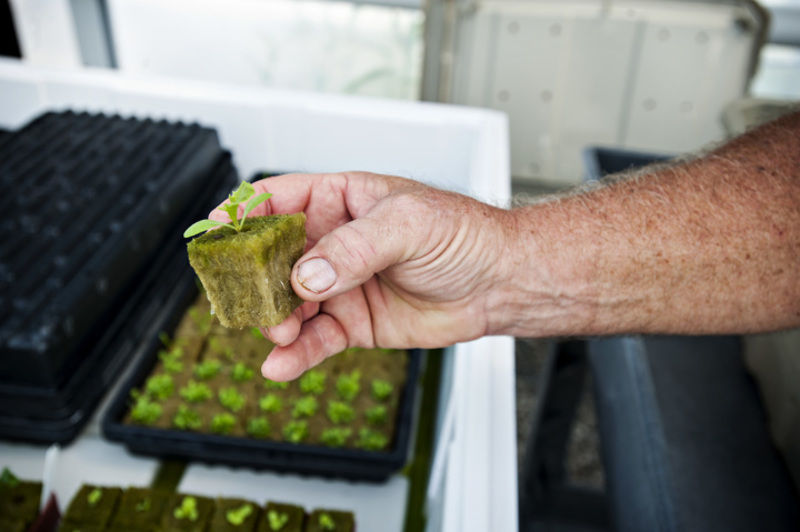 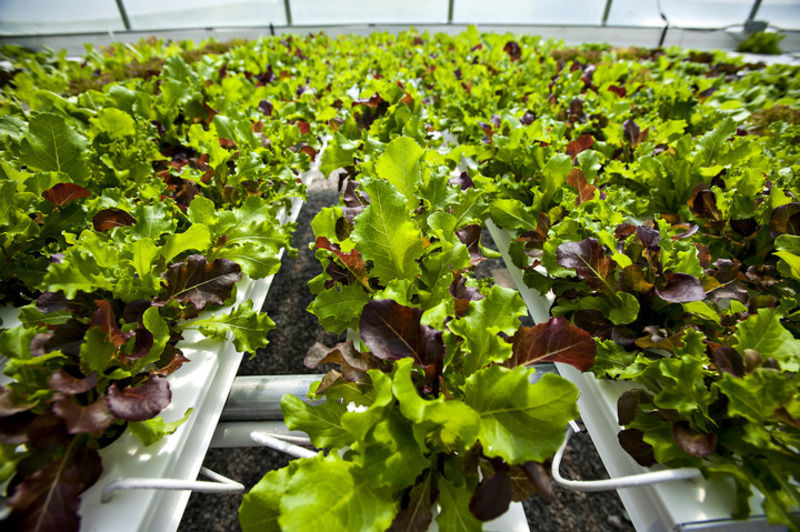 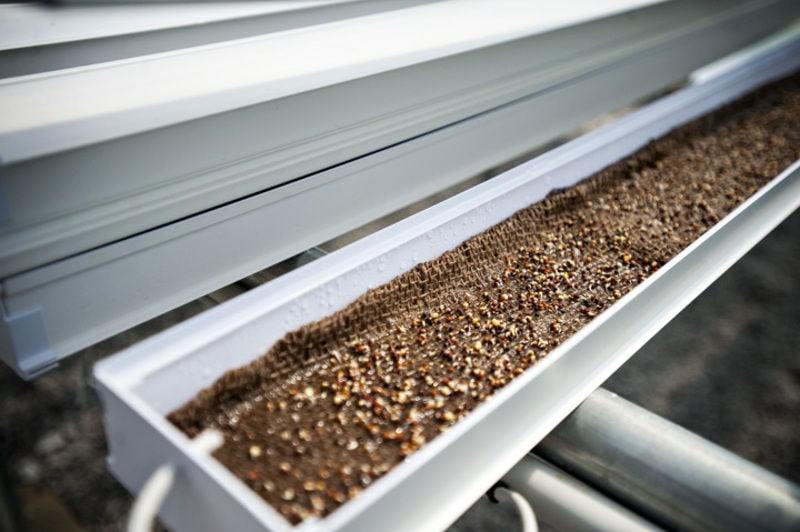 Seeds are set in a tray to sprout in the hydroponic greenhouse at Sunny Point Gardens on Friday, Aug. 29, 2014, in Edmonson County. (Miranda Pederson/Daily News)

Bibb lettuce in the hydroponic greenhouse is placed in a plastic clamshell after being harvested at Sunny Point Gardens on Friday, Aug. 29, 2014, in Edmonson County. (Miranda Pederson/Daily News)

Water with nutrients fills trays of lettuce as a growing medium, replacing soil in the hydroponic greenhouse at Sunny Point Gardens on Friday, Aug. 29, 2014, in Edmonson County. (Miranda Pederson/Daily News)

Miranda Pederson/Daily News Green leaf lettuce is held up by string Friday after individual leaves are harvested in the hydroponic greenhouse at Sunny Point Gardens in Edmonson County.

Seeds are set in a tray to sprout in the hydroponic greenhouse at Sunny Point Gardens on Friday, Aug. 29, 2014, in Edmonson County. (Miranda Pederson/Daily News)

Davis started Sunny Point Gardens four years ago and tried hydroponics about a year ago.

Hydroponics is the process of growing plants in sand, gravel, liquid or other medium, with added nutrients but without soil, according to hydroponics.com. Davis and his family grew produce for themselves for years and started selling it when they realized how much excess they had.

The farm specializes in foods such as lettuce, salad greens and kale, but growing enough to meet demand was sometimes a challenge, Davis said.

“You cannot grow those items in the heat of the summer outdoors in the ground,” Davis said.

The hydroponics method has had its benefits at Sunny Point Gardens.

“It’s a constant, 24/7 flow of the nutrient solution,” Davis said. “You can turn over a crop a lot quicker with hydroponics.”

For example, Davis said it takes 35 to 40 days to grow lettuce hydroponically. Growing lettuce in the ground takes 50 to 55 days.

The building where Davis grows with hydroponics looks like a greenhouse from the outside, but inside the temperature-controlled building are what look like at first glance rows of tables with dozens of leafy greens on top. Upon closer inspection, the produce is sitting in long, tray-like fixtures propped on rods, stretching from the aisle in the middle of the building to the wall. Davis showed that a tube carrying nutrient-rich water is plugged into the trays, which are slanted to allow the water to flow toward the wall, where the water travels through pipes to be recycled into the 500-gallon reservoir where the process begins.

Two large fans by the entryway control the temperature and kick off at 80 degrees in the insect-free environment.

Before being put in the trays, or gullies, the hydroponically grown produce starts like human life – in a nursery.

“It starts with dropping a seed in one of those rock wool cubes,” Davis said, gesturing to a large bin that holds several little grassy-looking cubes. Davis said the nutrients are compacted in the cube to spur growth.

Once a plant starts to peek above the top of the cube, Davis transfers it to another bin. As the plant grows and the roots begin to show underneath the cube, Davis puts it in the gullies to finish the process.

Davis did a lot of research on hydroponics before implementing the method on his farm, and he said it’s been a good decision.

“Even though I’ve got to watch it constantly every day, it’s still less maintenance than in the ground,” Davis said.

Davis pulled a head of lettuce from one of the gullies, examined it and put it directly into a plastic container, ready for sale.

“Many people think the taste is better with hydroponics,” Davis said.

Sunny Point Farms receives support from Community Supported Agriculture, which means Davis sells shares of the farm to people who can place orders for produce. Those customers are “very important” to the operation, Davis said, and he is grateful for them.

Davis said he didn’t know of many large farming operations in Kentucky using hydroponics, even though he heard about the method many years ago.

“It’s being done all over the world. Everywhere,” Davis said.

Davis said he knows of someone in Minnesota who grows produce using hydroponics, though in Kentucky it’s a little more cost effective since weather extremes here aren’t as harsh as in Minnesota. Davis heats his hydroponics building with propane in the winter, which hikes up the utilities.

Because of the limited space and high product turnover of hydroponics, people can easily grow their own produce, Davis said, though he said the time and maintenance required in the process often come easier to someone who has farming experience. Organic growing and products have become popular in recent years, Davis said.

Davis said he’s glad he’s tried hydroponics and hopes he can expand the operation. If the demand for organic products stays high, Sunny Point Gardens could expand hydroponic production and start employing people, which would be good for the whole community, Davis said. All of Davis’ family pitches in – including his wife, Saundra, two daughters and grandchildren – but his son-in-law is his only full-time employee.

“Saundra and I really want to grow this business where we can hand it off to our children and grandchildren some day,” Davis said.

Josh Poling, owner of Home Cafe, has been buying produce from Davis for about six months. The lettuce, for example, comes to Poling with the roots still on it the day after Davis picks it. Poling said his customers reap the benefits of the freshness and quality.

“It’s all from that peace of mind of knowing where your food comes from,” Poling said.

Poling said he wished everyone in Bowling Green knew how unique and high-quality Davis’ hydroponically grown product is.

“He really is a treasure to Bowling Green,” Poling said.