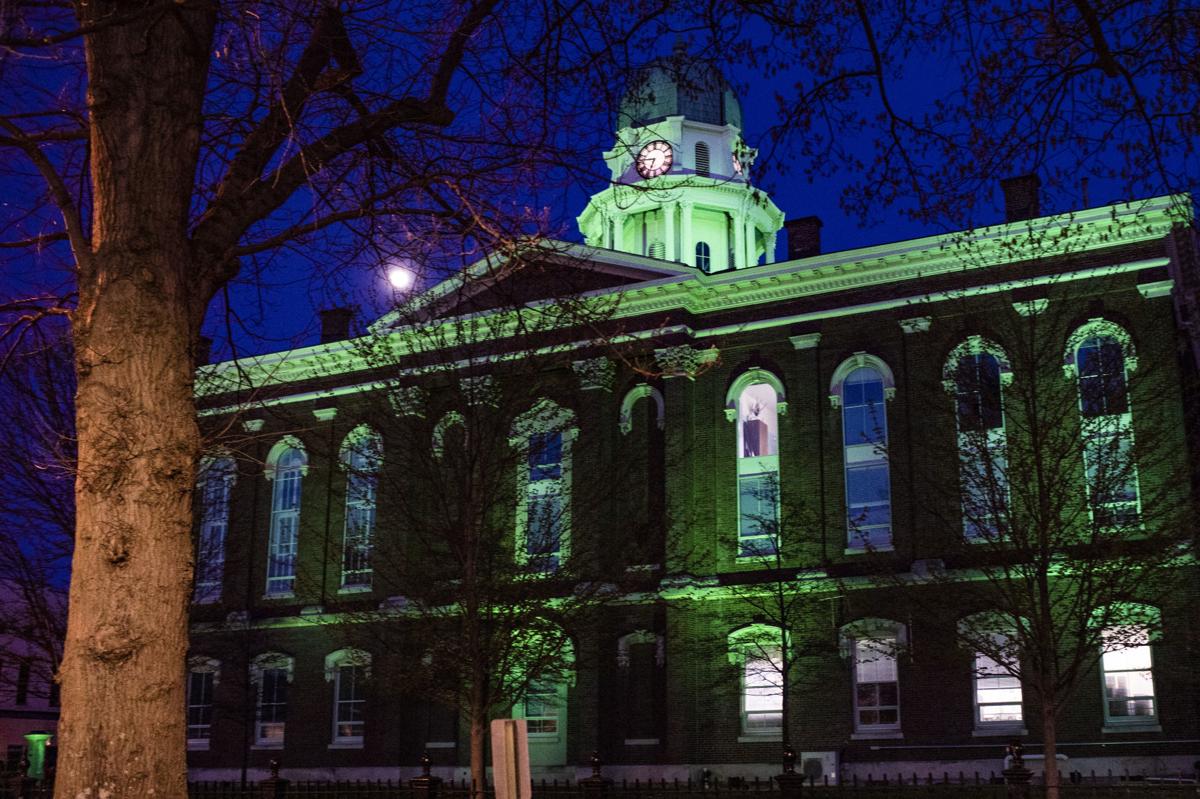 The Warren County Courthouse – lit green to honor those lost to COVID-19 – is seen Monday, April 6, 2020, from College Street. 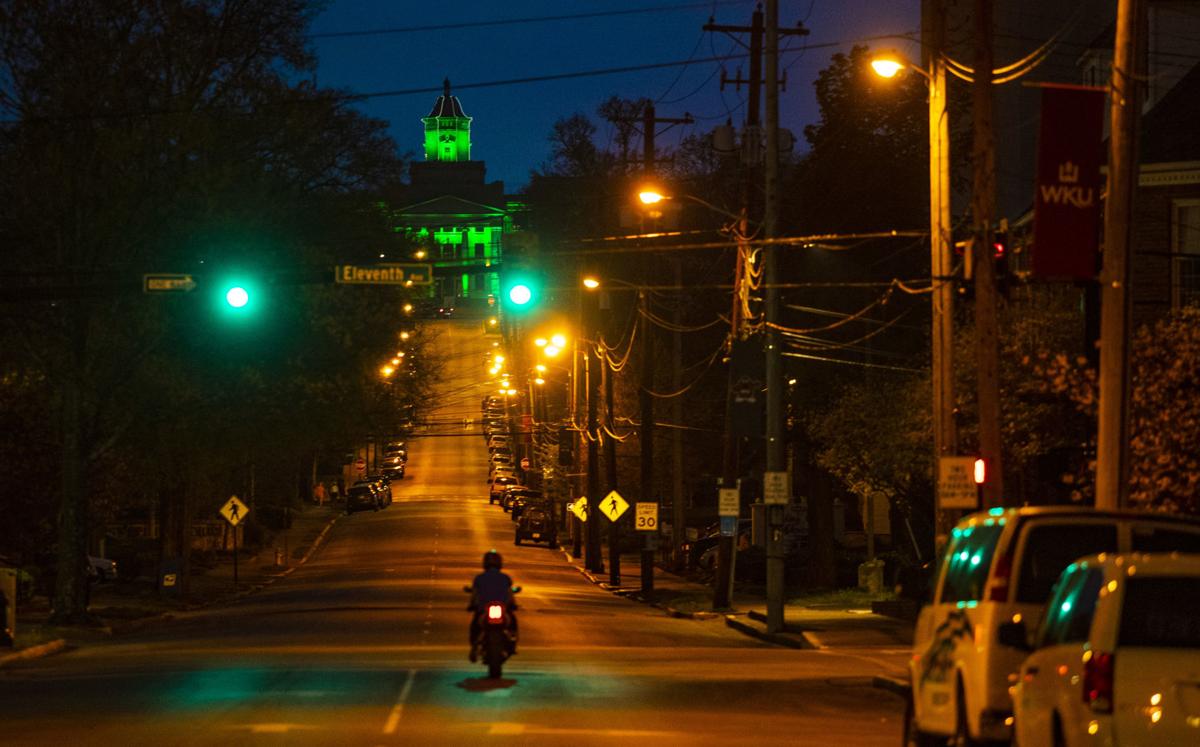 Cherry Hall is lit green to honor those lost to COVID 19 on Monday, April 6, 2020, from College Street. (Austin Anthony/photo@bgdailynews.com)

The Warren County Courthouse – lit green to honor those lost to COVID-19 – is seen Monday, April 6, 2020, from College Street.

Cherry Hall is lit green to honor those lost to COVID 19 on Monday, April 6, 2020, from College Street. (Austin Anthony/photo@bgdailynews.com)

An additional 147 confirmed coronavirus cases in Kentucky is the state’s biggest single-day increase yet, according to an update Tuesday by Gov. Andy Beshear in Frankfort.

In a little more than a week, more than 550 additional cases have been reported, raising the statewide total to 1,149.

Racial demographics are currently available for about 68 percent of the 1,149 cases; the breakdown is about 79.25 percent white, 12 percent African American, 2.6 percent Asians and 2 percent multiracial, Beshear said.

Beshear also announced that at least 65 people diagnosed with the virus in Kentucky have died, an increase of seven since Monday. He added that a death reported Monday in Jefferson County was incorrect, so the total entering Tuesday was 58.

In addition, 1,649 more tests in the state have been reported since Monday, bringing the total to date to 21,604. At least 306 people diagnosed with the virus have recovered, Beshear said.

Meanwhile, the Barren River District Health Department reported nine new area cases in a news release Tuesday. These include the first case to be reported in Hart County, along with one additional case in both Edmonson and Simpson counties and six new cases in Warren County.

One of the reported cases in Warren County includes an employee from Henkel in Bowling Green who was last on-site March 26, according to a statement from a company spokesperson. The company said it has notified employees who were in direct contact with the person and advised them to self-quarantine for two weeks.

A case in Simpson County is confirmed to be an employee at Minit Mart on Harding Road in Franklin, according to a statement from the company.

Minit Mart reportedly closed its doors at 9:30 a.m. Tuesday for cleaning, and the store plans to reopen in the next few weeks. All team members at the store are said to have been contacted and advised to follow guidelines by the U.S. Centers for Disease Control and Prevention.

As of Tuesday, three more people in the Barren River region have reportedly recovered, bringing the total in the district to 17. One person in the area to date has reportedly died from the virus, which causes the disease COVID-19.

In regard to testing, Kentucky Public Health Commissioner Dr. Steven Stack announced plans Tuesday to “ramp up” capacity to a maximum of 2,000 tests per day, which will be distributed regionally with help from 32 partner hospitals.

Stack said tests will be provided based on a two-tier system to people showing active symptoms, including a fever over 100.4 degrees and a dry cough, and/or difficulty breathing.

The first testing tier includes health care workers and first responders, people over age 60 and those currently living in a congregate setting, such as an independent or assisted living center. The second includes people living with certain preexisting medical conditions.

“(In) a world where resources are limited, we have to deploy a scarce resource to the greatest good,” Stack said.

A reporter asked during the briefing if Kentucky hospitals are using hydroxychloroquine and azithromycin, two drugs that President Donald Trump has mentioned, to treat the virus.

A number of treatments, including hydroxychloroquine, azithromycin, steroids and convalescent serum, are being considered but are “experimental (and) none of them have reached the level of scientific comfort to be able to recommend that these are the proven treatments for the condition,” Stack said.

Beshear said at least one Kentucky hospital is participating in a treatment trial relating to testing antibodies from plasma of people who have recovered from COVID-19.

When asked if Kentucky employees who are concerned about the virus must return to their job in-person amid the pandemic, Deputy Secretary of Kentucky Workforce Development Josh Benton said it depends on the situation.

“If they can make accommodations to make sure that’s a safe work environment, then that individual’s going to have to go back unless they can show that there’s a risk there if they go back,” Benton said.

Beshear also said his administration is working with both the National Guard and the Kentucky Department of Homeland Security on emergency operations.

Asked about his thoughts on the one-year budget passed by the Kentucky legislature, which does not include the $2,000 pay raise for teachers that he campaigned on, Beshear said his focus right now is on the coronavirus.

“My commitment is that we will come out of this ... we will rebuild. And all of those things that I pushed for – I (still) want to see happen while I am governor,” Beshear said.

“Right now I’ve got to focus every day on protecting lives, and doing what it takes to get us through this.”

He will either have to sign the budget bill or line item veto parts of it before the General Assembly reconvenes April 13-15 to consider overriding any vetoes.

At 1008 identified cases of COVID-19 in KY, that racks up a whopping .02 % or 2 hundredth of 1 percent for the entire population of KY of approximately 4.5M. The deaths of 60 people is not quite up to the known 62 deaths in KY of Hepatitis A and the 126 deaths in KY of the common flu. 24,000 deaths YTD of flu types in US through 3/28/2020. I say lock down year round till no one has any chance of dying from any of this. Then we can focus on starvation and the diseases that will develop once the economy becomes caca! We should have a Zero Tolerance to death. Only our government can help. It's for the good of the people. And by the way, a new study I saw on the internet said people who constantly touch their smart phones are a 100X higher risk for all diseases and mental incapacity. Print more money Big Brother! Save us.