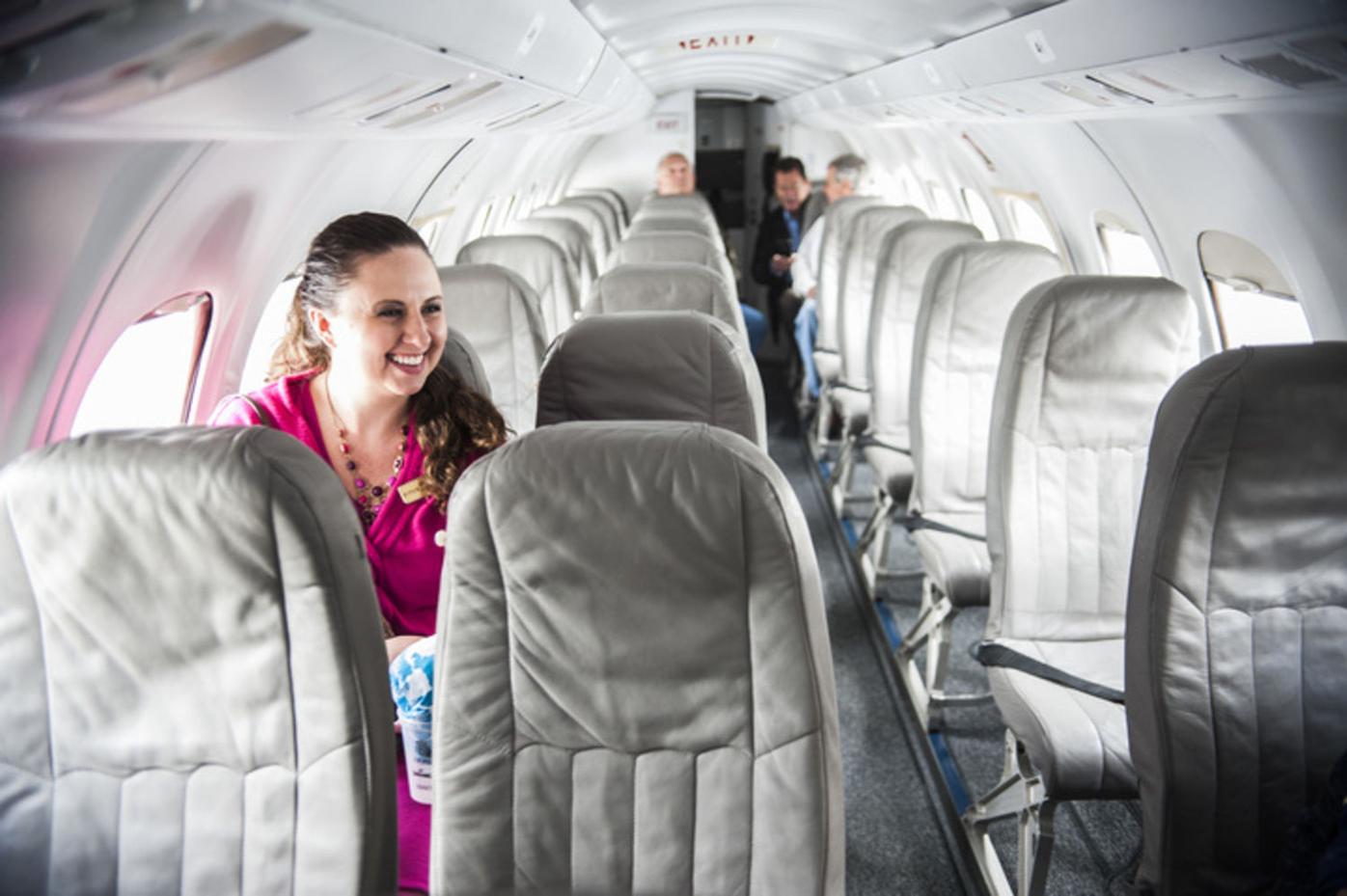 Morgan Staley of Bowling Green sits in the Jetstream 41 which will carry passengers on Contour Airlines flights on Tuesday, May 17, 2016, at Bowling Green-Warren County Regional Airport. (Austin Anthony/photo@bgdailynews.com) 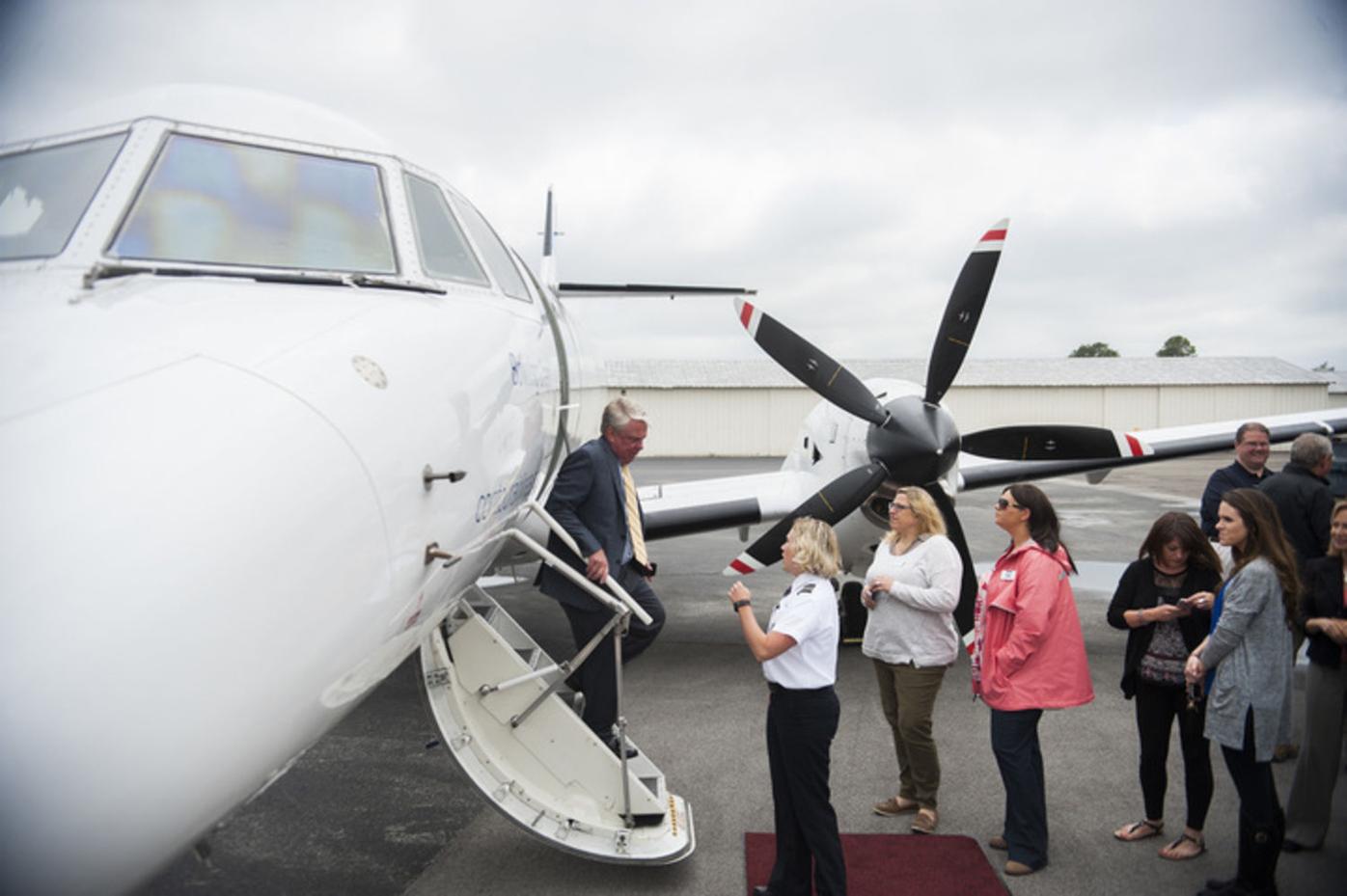 People wait in line to look at the Jetstream 41 which will carry passengers on Contour Airlines flights on Tuesday, May 17, 2016, at Bowling Green-Warren County Regional Airport. (Austin Anthony/photo@bgdailynews.com) 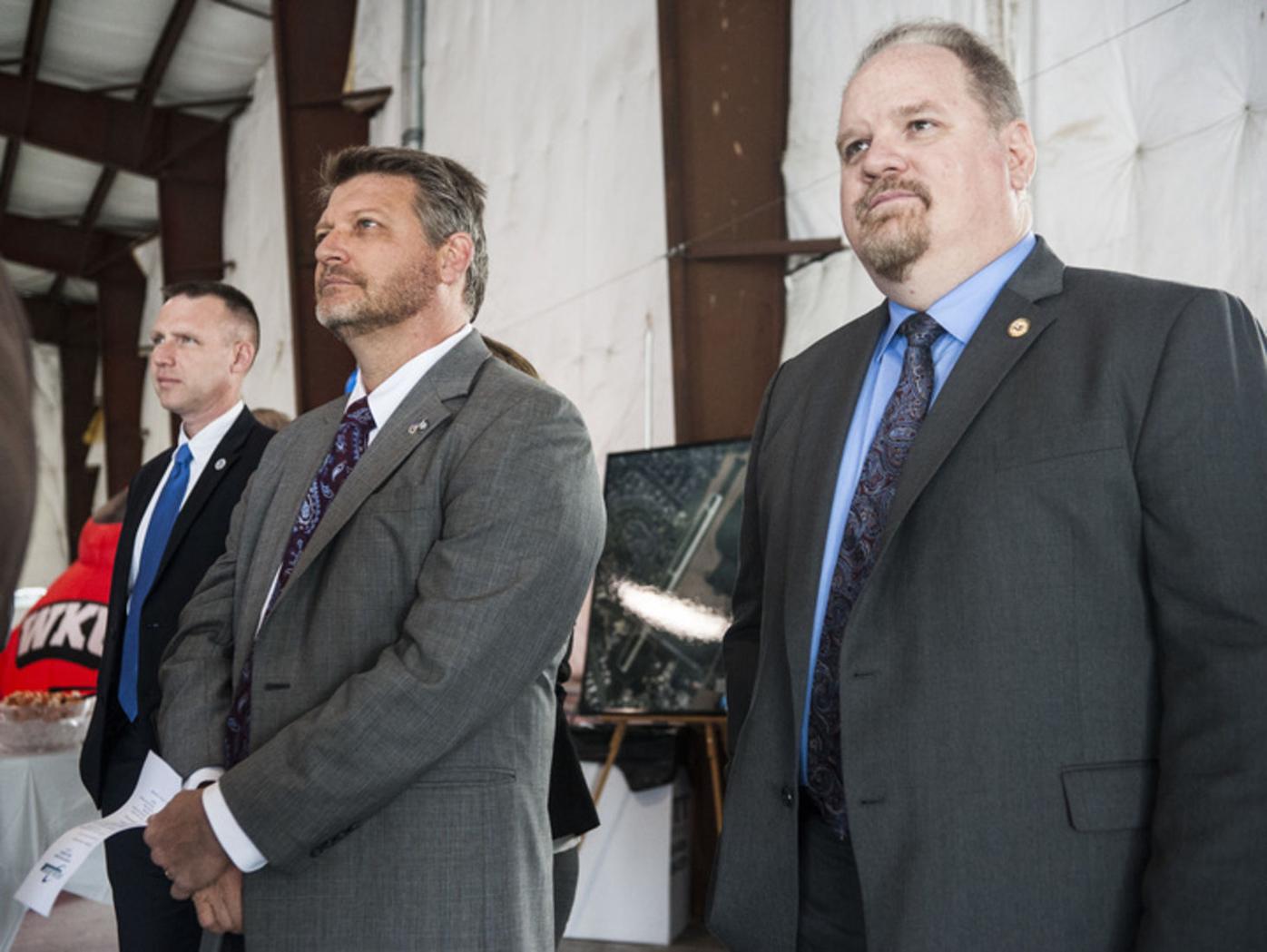 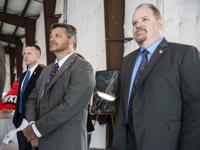 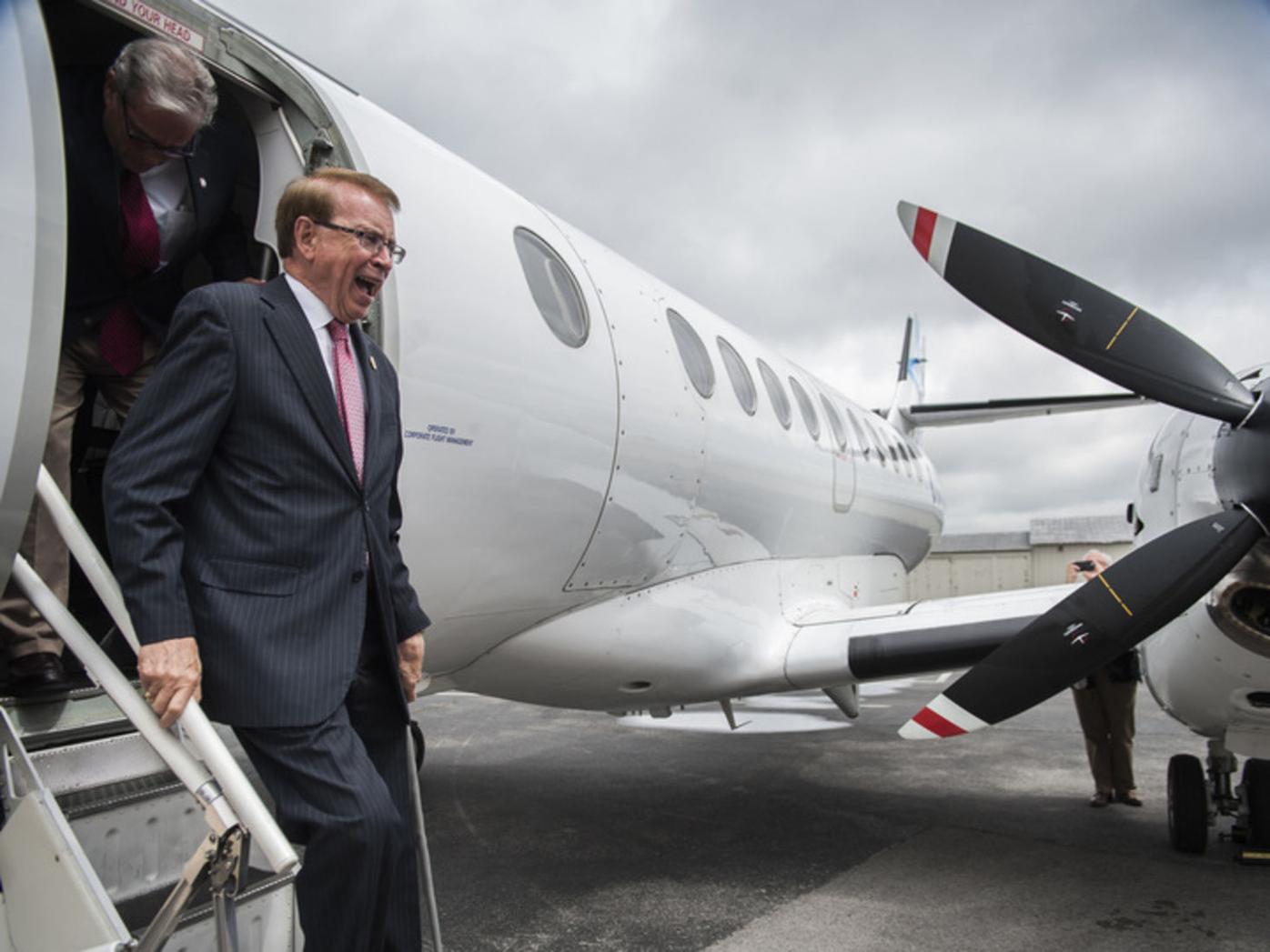 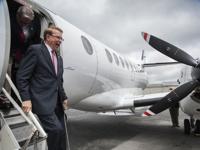 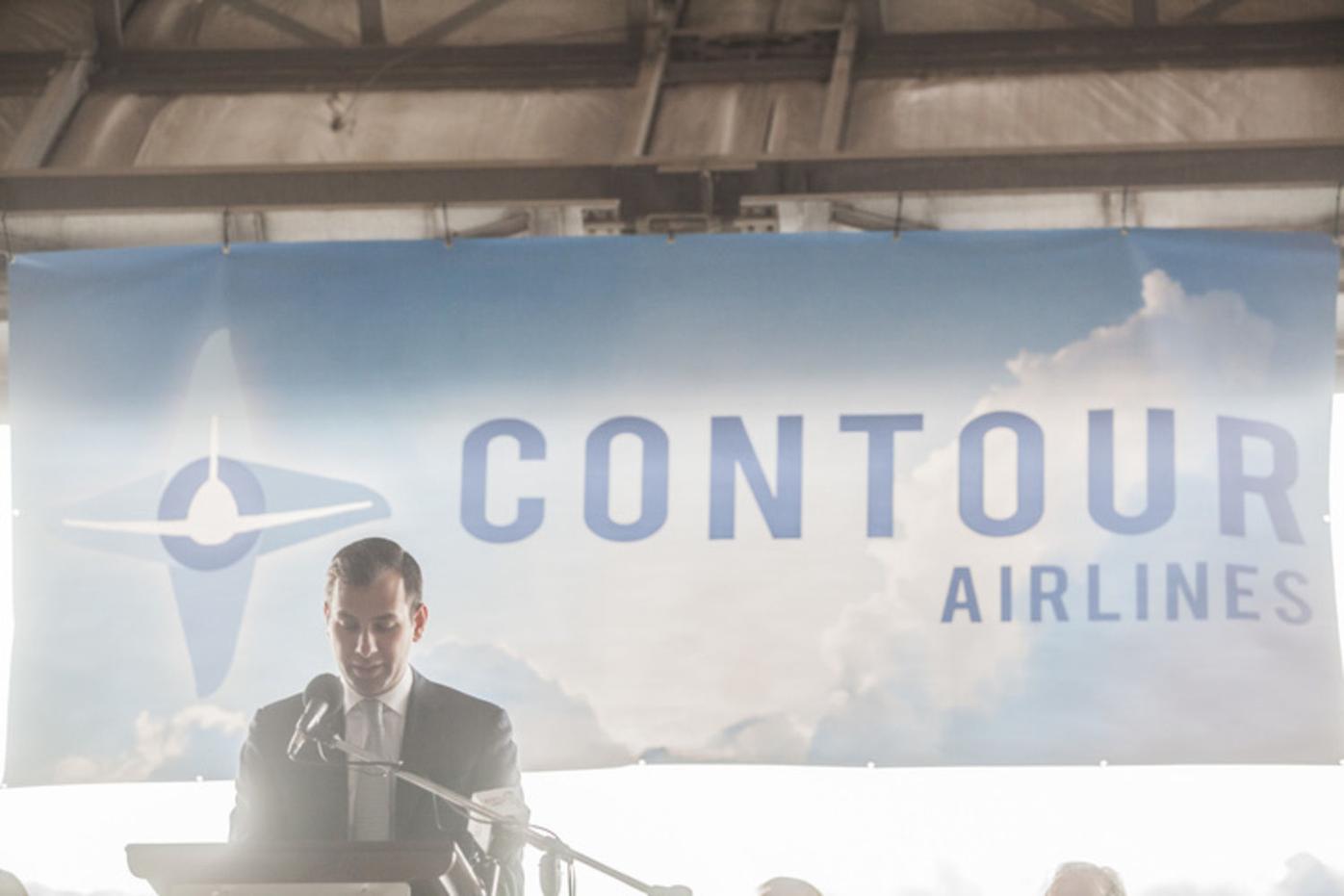 Morgan Staley of Bowling Green sits in the Jetstream 41 which will carry passengers on Contour Airlines flights on Tuesday, May 17, 2016, at Bowling Green-Warren County Regional Airport. (Austin Anthony/photo@bgdailynews.com)

People wait in line to look at the Jetstream 41 which will carry passengers on Contour Airlines flights on Tuesday, May 17, 2016, at Bowling Green-Warren County Regional Airport. (Austin Anthony/photo@bgdailynews.com)

It is not only the travel plans of many southcentral Kentucky residents that are being altered based on the news that commercial air service is returning to Bowling Green. The service is likely to have a significant effect on the region's business landscape as well.

It was announced Tuesday that, after a 44-year absence, commercial air service will once again be offered from Bowling Green-Warren County Regional Airport. Contour Airlines will offer two round-trip flights daily during the workweek to Atlanta and one per day on the weekends. It will also offer two weekly flights to Destin, Fla., from April through October. The flights are scheduled to start in August and are the culmination of many years of efforts by local officials to get commercial service here.

"We have worked well on solving problems here, but air service has been just outside our grasp for so many years," Warren County Judge-Executive Mike Buchanon said.

Using about $1.8 million in incentives from the state and federal governments as well as commitments from local businesses, the airport board signed a one-year contract with the Smyrna, Tenn.-based carrier. As well as being a convenience for local residents, the commercial service is expected to have significant economic benefit in several ways.

Directly, the return of air service will mean more than a dozen new local jobs.

The Transportation Security Administration will hire seven to nine people locally, Airport Manager Rob Barnett said, with the jobs being a mix of full-time administrators and part-time screeners. According to the TSA website, part-time screeners make in the $15 to $23 an hour range with full benefits.

The airport will also hire six to eight additional people for jobs such as baggage handling and other ground operations, Barnett said.

The air service is also being seen as a boon for existing businesses and for business recruitment efforts.

Buchanon cited as an example the case of a company official who was looking at locating a business here. After landing at the Nashville airport, he began the hourlong car drive to Bowling Green. "He got halfway here and asked 'How much farther?' That was the end of that project. This will level the playing field with other communities" that have commercial air service, Buchanon said.

Bowling Green Area Chamber of Commerce CEO Ron Bunch said that during the airline recruitment effort, officials tried to estimate the economic impact. A rough estimate is that the state will get the $750,000 it has provided as an incentive for air service returned in one year in additional tax revenue.

"When people travel to Nashville, they spend money on fuel, food" and other items, he said. "We will be able to retain a lot of that spending."

In working on the airline recruitment effort for the last several years, Barnett said he met with numerous CEOs, corporate travel directors and other local business leaders who were almost all "extremely interested" in local commercial service.

"We expect a large percentage of the Atlanta route to be business oriented," he said.

The corporate interest stems from the fact that it will "save them time and save them money," Barnett said.

A charter flight with four passengers to Atlanta costs well into the thousands, he said. Although ticket prices have not been determined, Contour fares will likely be a fraction of that cost.

Bunch said "85 percent of our success comes in business expansion" – efforts that will be aided by Tuesday's news. "Now we can say we have service right here that's probably more convenient."

That convenience will also be a major benefit to local business travelers.

"When you are talking about an executive officer, to save four or five hours in a day, that's a lot of money," Barnett said.

Bowling Green-based Fruit of the Loom was a major presence at Tuesday's news conference, with displays, give-aways and many employees on hand. The company's commercially recognized "Fruit" guys also were on hand.

“We have been supportive of this project, and it certainly is a reflection of the growth in our community," Fruit of the Loom Chief Operating Officer Tony Pelaski wrote in an email to the Daily News. "We are excited about the opportunity to improve our travel options and make it easier for our customers and vendor partners to travel to Bowling Green.”

A key element to the success of the service will come down to selling tickets over the long haul.

"Sustainability is the key element," Barnett said. He said the airport will hire a marketing firm to promote the flights across a region stretching from Columbia to Elizabethtown, Hopkinsville to Portland, Tenn.

Local officials will also be marketing the flights to Bowling Green.

"We are already on it," said Vickie Fitch, executive director of the Bowling Green Area Convention and Visitors Bureau, just hours after Tuesday's news conference. The CVB staff is working on plans to promote tourism to Bowling Green via the air service.

Fitch said the commercial service will also help Bowling Green lure and keep convention and event business. She pointed to the Danchuk Tri-Five Nationals event in August, a car event that drew 11,000 people here last year. "They bring international people," she said, who will now be able to fly directly from Atlanta's international airport to Bowling Green.

As for recruiting new events, "It will be so nice to say, 'Yes, it's coming,' " when asked by event planners about the availability of air service, she said. And when meeting with international tour operators, "that will be an instant pitch."

And even though Destin is seen as a destination more than a place to draw visitors from, "we won't ignore that market either," Fitch said.

When making flight reservations, would you use Contour Airlines at the Bowling Green-Warren County Regional Airport?