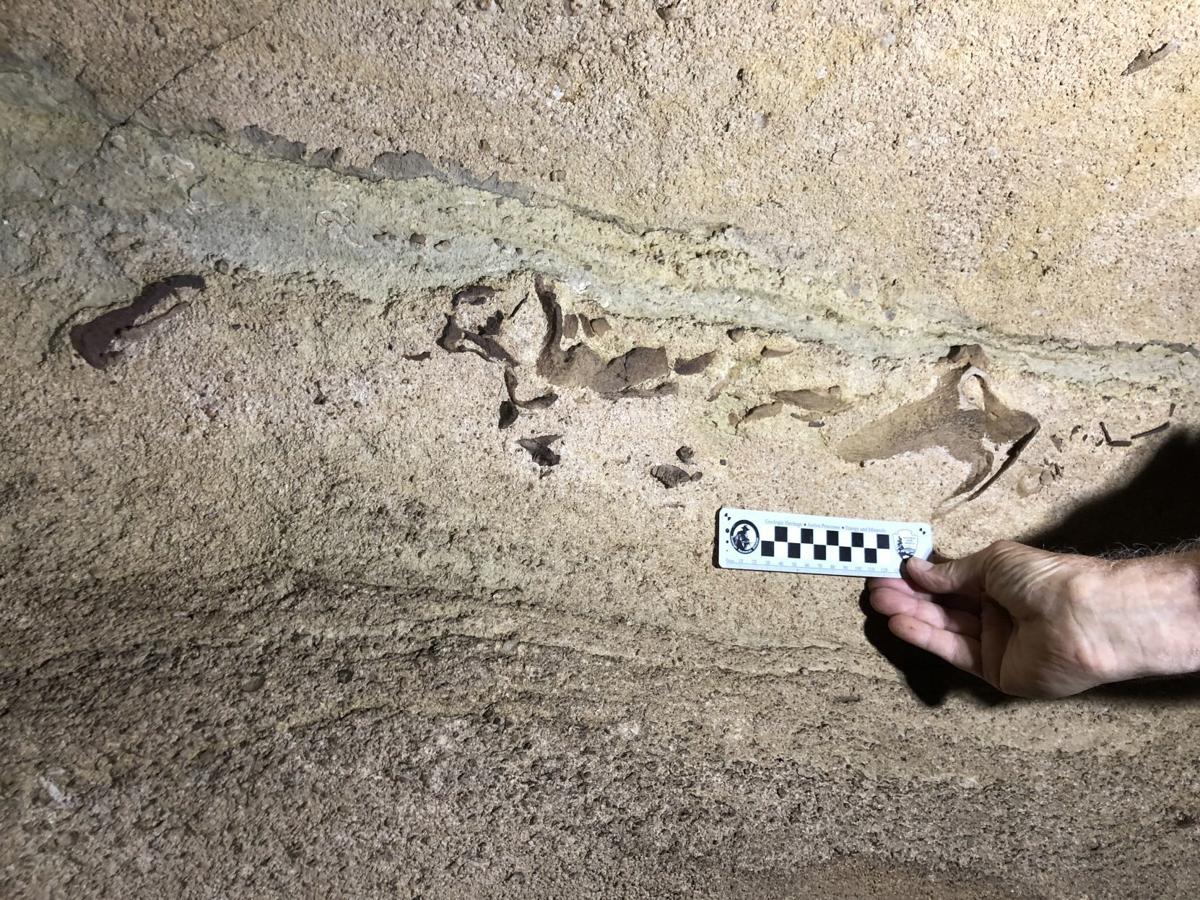 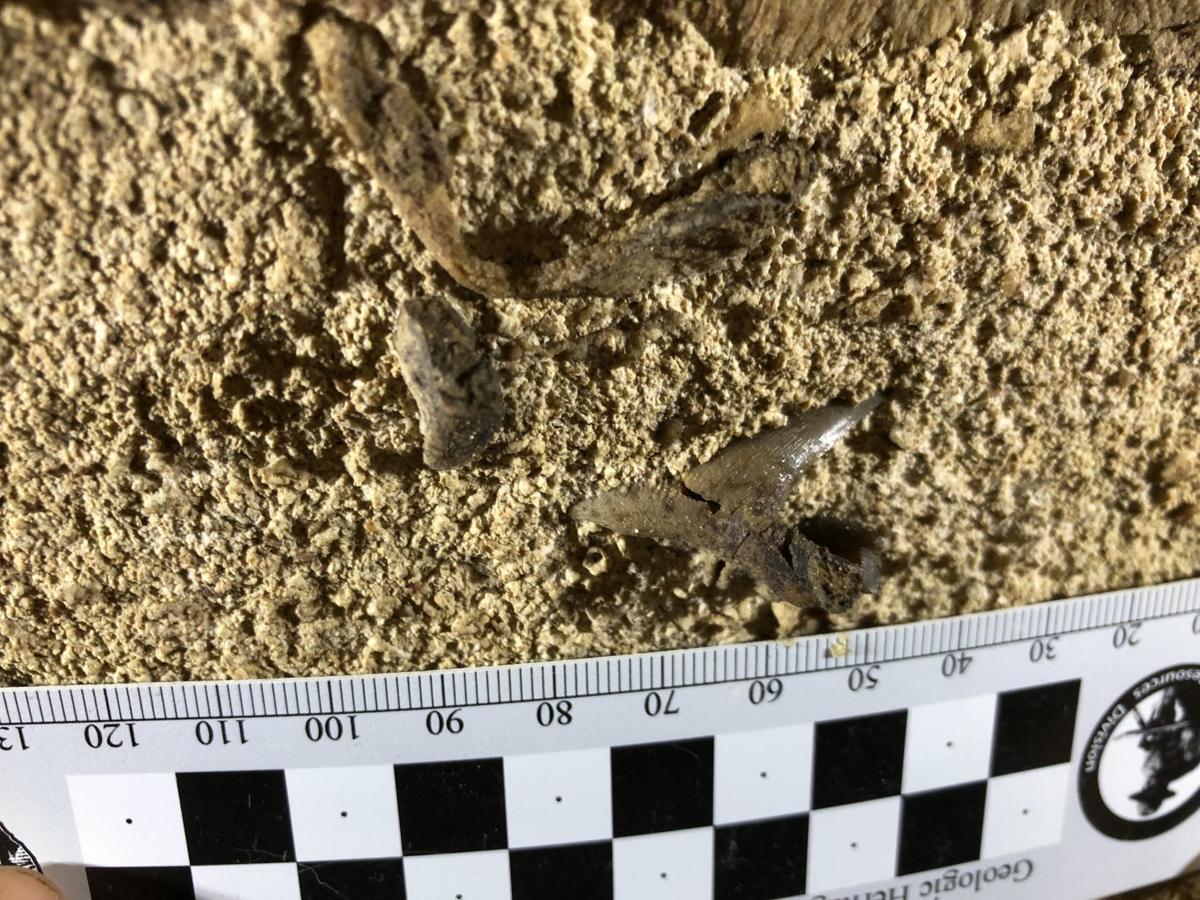 Shark tooth fossils found in Mammoth Cave last year are believed to have come from the Saivodus Striatus,.

Shark tooth fossils found in Mammoth Cave last year are believed to have come from the Saivodus Striatus,.

It all started with two Mammoth Cave specialists, Rick Olson and Rick Toomey, finding the fossilized shark in the cave walls while exploring and mapping the cave system.

Paleontologist John-Paul Hodnett, who researches shark fossils, was brought to Mammoth Cave in November after the discovery and said this find is a rarity.

“I was shown a set of photographs that looked like a series of teeth and some big chunks of cartilage with the teeth,” Hodnett said. “I thought this is really cool because shark cartilage in itself is very rare in the fossil record. Shark skeletons are made up primarily of cartilage. It is a softer tissue than, say, bone tissue, which fossilizes better. When you actually have cartilage of any kind to preserve, it is always a fantastic find.”

Hodnett said the shark was recognizable as a shark called Saivodus Striatus.

“Saivodus is only known from the late Mississippian Period, which is about 330 million years ago,” Hodnett said. “All we have known up until now is just the teeth of Saivodus. To actually have cartilage with the teeth was like a major find for this particular species of shark.”

To properly verify the fossils, Hodnett spent time at Mammoth Cave looking at the spot where the fossils were found.

“They thought maybe they had a whole skeleton, which unfortunately wasn’t the case, but what was really amazing is that the cartilage belonged to one big skull, which was exposed in the cave wall,” Hodnett said. “From what I could see was one big jaw of the shark and some other cartilage that could belong to parts of the cranium.”

“Saivodus is actually a pretty big shark,” Hodnett said. “For the particular one found at Mammoth Cave, we are thinking about something between 15 and 20 feet long.”

Hodnett added there were other Saivodus fossils found, leading experts to believe the species could be upward of 25 or 30 feet long.

After the initial identifications were verified, Hodnett said the plan of what to do with the fossils is next.

“I took the measurements and photographs and we are still coming up with a plan on what to do with this particular specimen whether we will be able to remove it safely out of the cave wall or if this is something we will have to document in place,” Hodnett said.

Hodnett also said Mammoth Cave is abundant in other shark fossils as well.

“In the process of getting to the new specimen, we are seeing more shark teeth,” he said. “It is surprising how (many) shark fossils there are at Mammoth Cave, and because they are preserved in the cave, they are not exposed to the elements like other shark fossils. They can fall apart or get abraded from either wind, sand grains or snow. Because they are in the cave and slowly eroding out of the cave due to cave moisture, they are in great shape and they are offering a lot more high-resolution information.”

The rock that the fossil was found in is also significant, according to Hodnett.

“There is a diverse group of shark fauna that is in the cave, and there’s a particular layer of rock that is at Mammoth Cave,” said Hodnett, adding that the rock layer is called Ste. Genevieve Limestone. “This layer is known going all the way to Missouri to West Virginia. We have never had any documentation of shark fossils coming from that particular rock bed. That in itself is ... like a major puzzle piece.”

This finding also will allow comparisons to be made to other findings around the world.

“At this moment, in North America, we have very little good (examples) of fossil sharks for this time period,” he said.

Hodnett also addressed how these fossils ended up in Mammoth Cave.

“There was an ancient warm seaway that went through most of North America,” he said. “But things change, new mountains rise and up and drain the land. About 13 million years ago, the river system started to carve into the limestone and started forming tunnels, which is the Mammoth Cave system we know in the area. If it wasn’t for the water actually changing and shifting every time creating these tunnels, we would have never known that the shark teeth were here.”

The research is still being conducted, according to Hodnett, adding that he plans to do a presentation for the Society of Vertebrate Paleontology in Cincinnati in October.

Hodnett also hopes that the research in Mammoth Cave will expand.

“I’m hoping that there will be more research in the cave,” he said. “We have only been in a few tunnels and it is amazing what we found in those. Imagine what else we could find in the rest of them. That would be the other goal to expand and look at other locations in the cave and find more evidence of sharks. There are other layers of rocks from different formations that could have records of sharks as well, but we don’t know if we don’t look.”

“Everything in the park is protected,” she said. “We preserve it and protect it for scientific and educational purposes. These fossils are such an important and fragile resource. We are very careful about how we show those to the public. These particular fossils are out of the public view and off the main cave route.”

Schrorer said the discovery is generating a lot of good publicity for the park.

“We’ve known these fossils are down there for many years, but they haven’t been scientifically researched until now,” she said. “To have an actual shark expert come in and tell us what we have has revealed how important these fossils are to the park and our geological history.”

Sorry, there are no recent results for popular articles.

Sorry, there are no recent results for popular images.