You are the owner of this article.
Edit Article Add New Article
Home
News
Obituaries
Sports
Opinion
Classifieds
Jobs
e-Edition
Share This
Following President Donald Trump’s declaration of a national emergency amid the ongoing coronavirus outbreak, and in light of the numerous ways the pandemic is affecting day-to-day life in southcentral Kentucky, the Daily News has removed paywall restrictions from bgdailynews.com in order to provide area residents access to important information and reporting. Visit our coronavirus section.
1 of 7 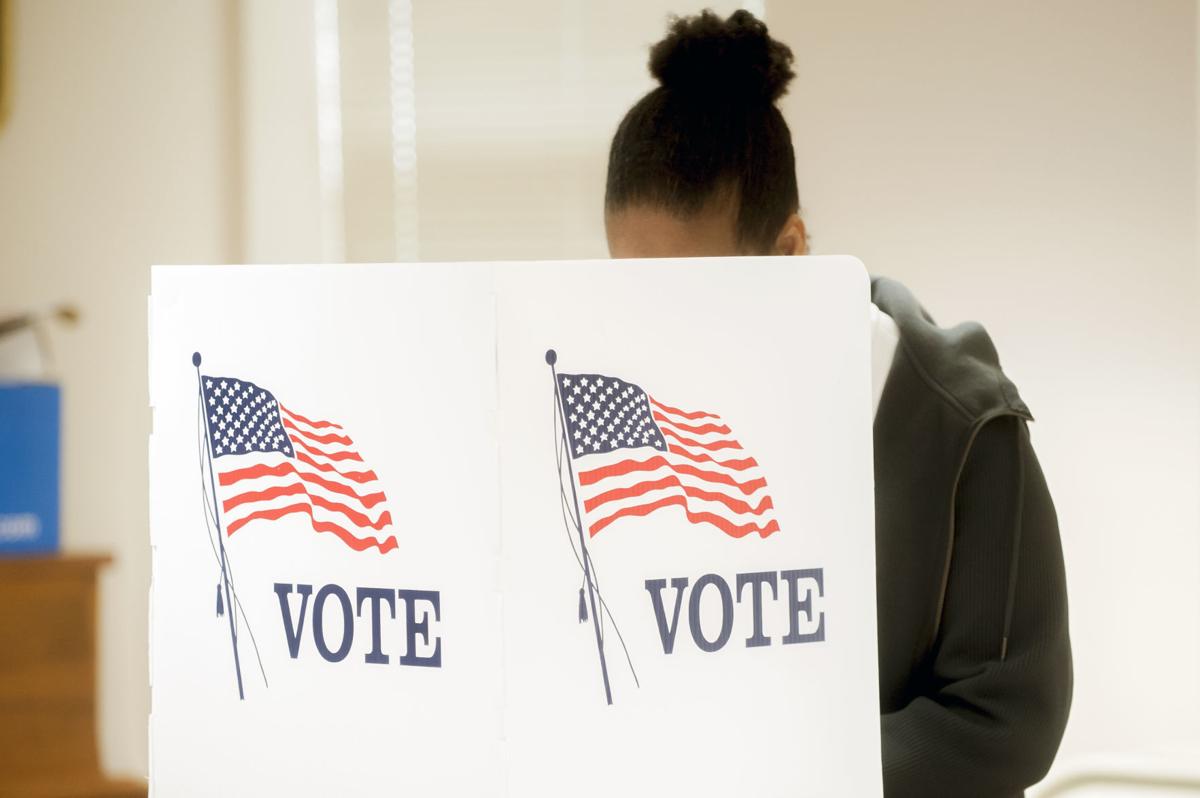 A woman fills out a ballot form Tuesday, May 21, 2019, in the state primary election at Eastwood Baptist Church. 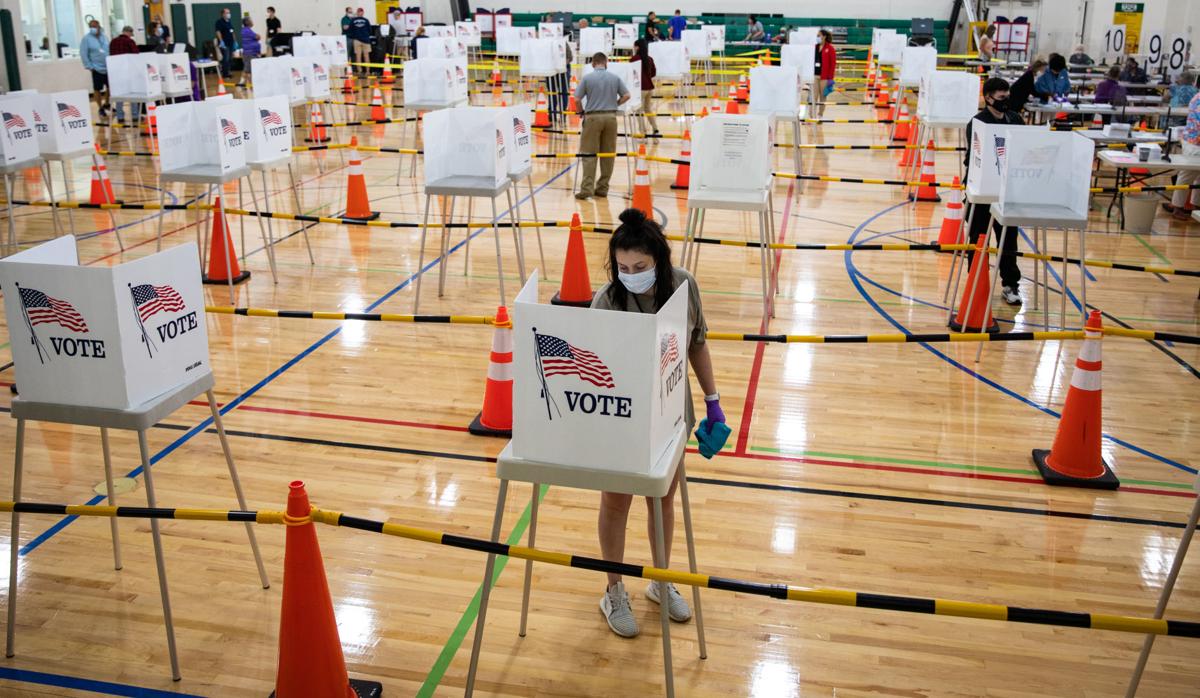 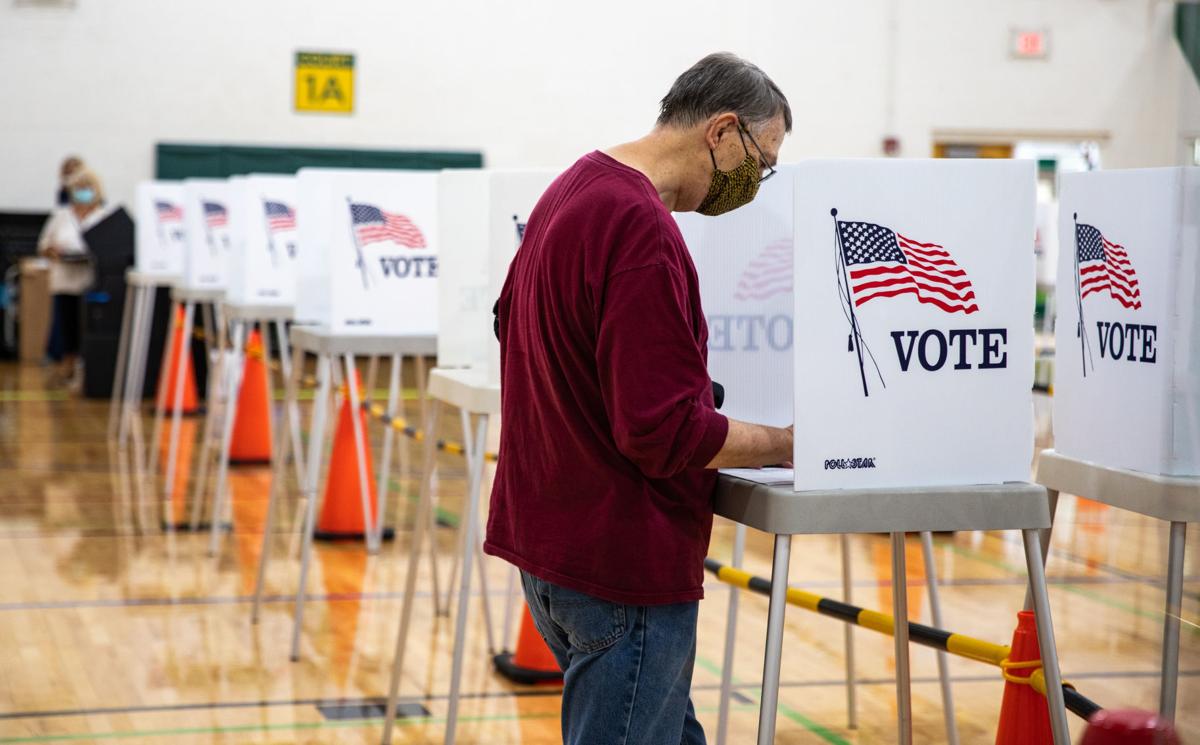 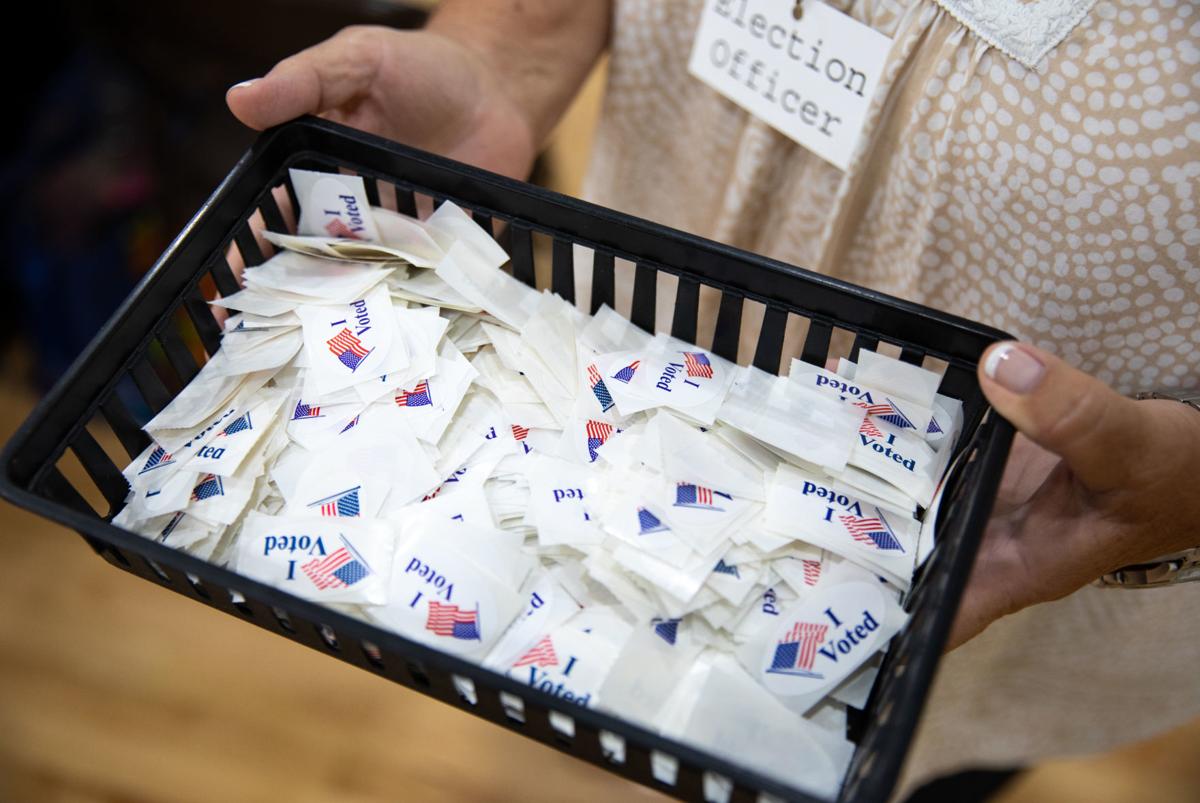 Election officer Debbie Tarrence hands voters an “I Voted” sticker after they cast their ballots for the primary election in the Phil Moore Park Gymnasium on Tuesday morning, June 23, 2020. (Grace Ramey/photo@bgdailynews.com) 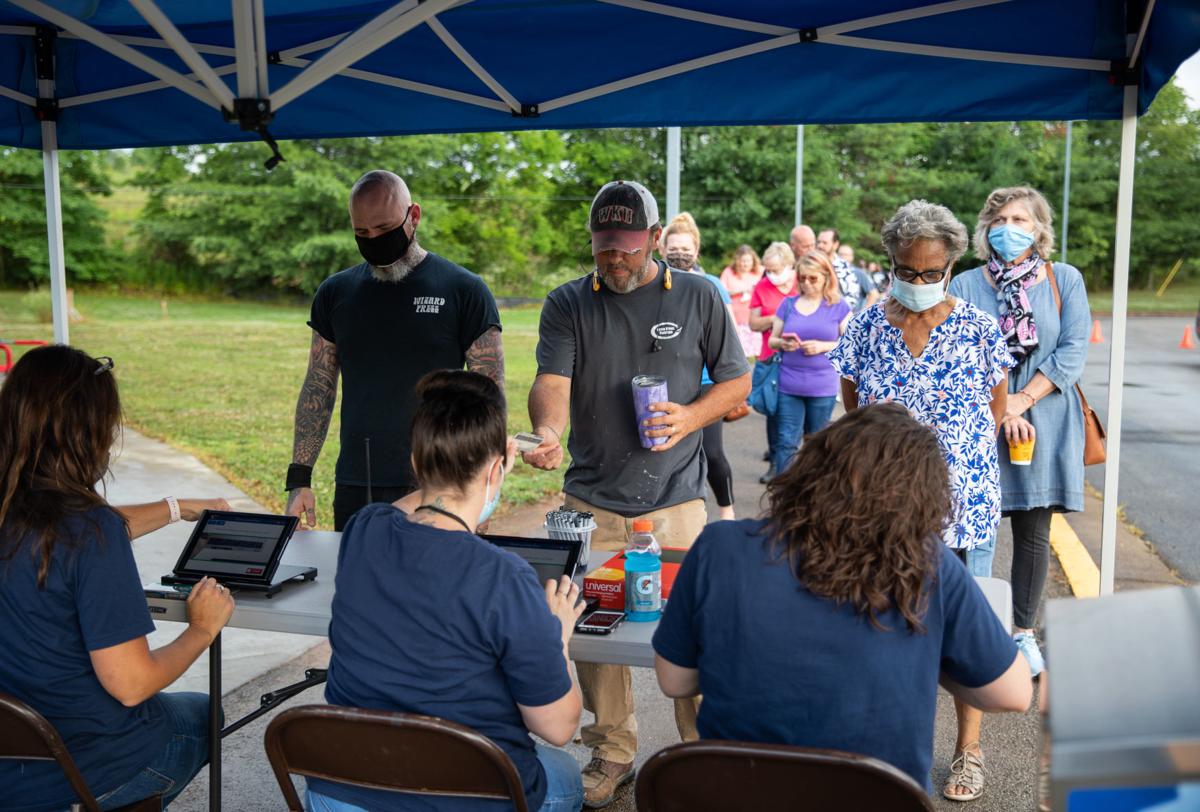 Warren County residents hand their driver’s licenses to election officers outside the Phil Moore Park Gymnasium as they arrive Tuesday morning, June 23, 2020, to vote in the primary election. 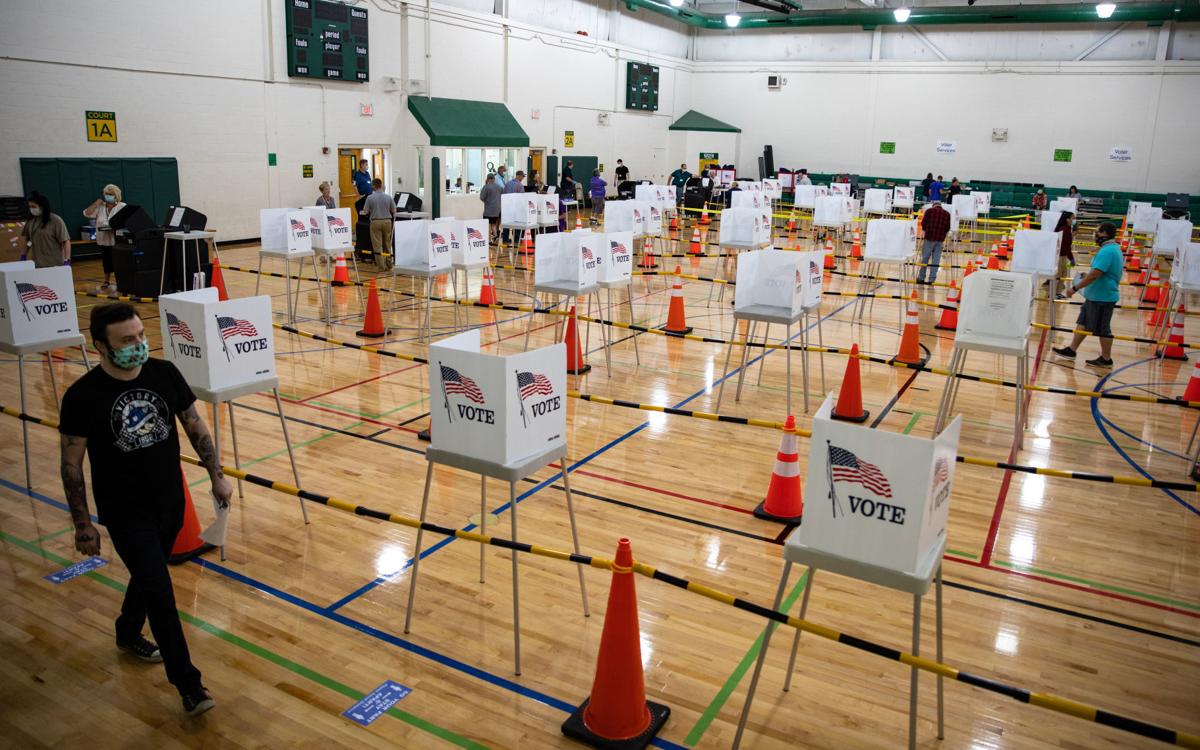 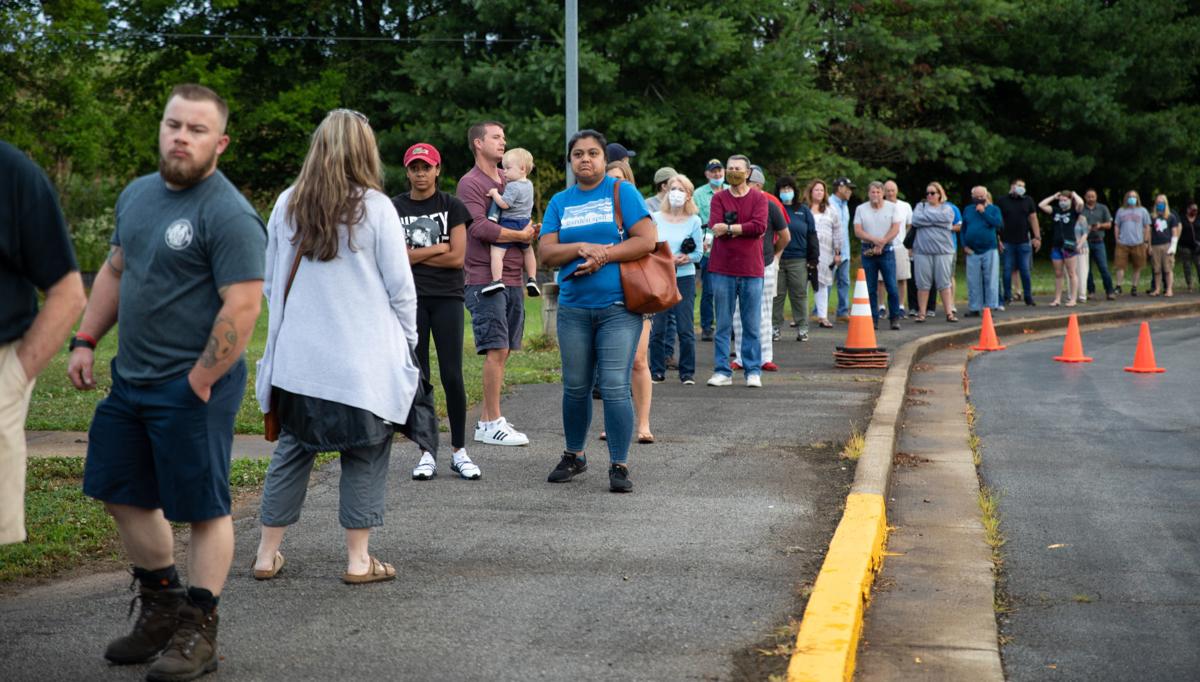 A line stretches down the sidewalk outside the Phil Moore Park Gymnasium as Warren County residents arrive Tuesday morning, June 23, 2020, to vote in the primary election.

A woman fills out a ballot form Tuesday, May 21, 2019, in the state primary election at Eastwood Baptist Church.

Election officer Debbie Tarrence hands voters an “I Voted” sticker after they cast their ballots for the primary election in the Phil Moore Park Gymnasium on Tuesday morning, June 23, 2020. (Grace Ramey/photo@bgdailynews.com)

Warren County residents hand their driver’s licenses to election officers outside the Phil Moore Park Gymnasium as they arrive Tuesday morning, June 23, 2020, to vote in the primary election.

A line stretches down the sidewalk outside the Phil Moore Park Gymnasium as Warren County residents arrive Tuesday morning, June 23, 2020, to vote in the primary election.

Politicians and celebrities, from Hillary Clinton to Lebron James, took to social media that day to criticize the state’s limited number of poll sites, with many counties only offering one.

Clinton linked to a Washington Post article stating there will be fewer than 200 polling sites statewide, compared to 3,700 in previous elections, which she said was “voter suppression.”

James referenced the same article which said that one poll site in Jefferson County will serve more than 615,000 voters, and half the state’s black voters reside there, which he called “systemic racism and oppression.”

At Beshear’s news conference, he said he’s aware of “concerns about numbers of polling places in different locations.

“But what I’d ask is that people look at all of the facts, including first-ever mail-in voting, first-ever no excuse early voting, and the numbers are already adding up to be the most significant primary in terms of voter interest, and in votes that we have seen,” he said.

The state has reportedly received 883,054 absentee ballot requests, of which 452,030 have been filled out and mailed back in, and 88,530 have been cast in-person through local county clerk offices.

Beshear said more Kentuckians requested absentee ballots for this election than voted in each primary election over the last five years. Additionally, he said the state is on course to have its “largest” voter turnout in a primary over the last decade.

Changes to the state’s primary election procedures began in March when Beshear issued an executive order moving the election from May 19 to June 23 amid worry over the pandemic.

In April, based on a recommendation from Secretary of State Michael Adams, Beshear signed another executive order allowing the State Board of Elections to provide additional emergency regulations.

Under the new emergency regulations, registered voters were able to cast an absentee ballot both in-person at a county clerk’s office beginning June 8, or by mail. County clerks were also permitted to reduce the number of in-person poll sites on election day.

Adams said doing so would ensure a “successful and safe election.”

The state sent a postcard about the change to every registered voter, and launched a web portal allowing voters to request a ballot by mail. Under a new order signed by Adams on Monday, voters who did not turn in their absentee ballot by election day can vote in-person at a polling site.

A reporter asked Beshear on Monday about plans for the general election in November.

The governor said he also wants expanded mail-in and in-person absentee voting, “especially” if there are “really long lines” Tuesday. He added that if people don’t vote that “otherwise” would have given more in-person polling places, “that’s something we’ll have to address.”

He also announced that on Wednesday the state will unveil its plan for reopening schools in the fall, which he said will include some “expectations” and “strong suggestions.”

“I just want to prepare everybody – we’re gonna be able to go back to in-person classes at least part of a week, I hope all of the week, but it’s got to look different,” he said.

Beshear also said Labor Cabinet Secretary Larry Roberts will now serve as Commissioner of the state’s Unemployment Insurance Offices. He added that a contract with an outside vendor is being finalized to help with the state’s over 50,000 unresolved claims from March, April and May.

By next week, he aims to add two to three in-person unemployment service sites throughout the state, with hopes to eventually have four to five regionally.

Asked about fans at sporting events in fall, Beshear said it is a possibility with masks and social distancing. He added that requiring a phone number with each ticket would allow for contact tracing.

Beshear reported 13,839 total cases statewide Monday, 390 of which are probable, and 90 newly confirmed.

The state virus-related death toll also remains at 526, with zero newly confirmed deaths. At least 3,534 people have recovered and 349 are currently hospitalized, 67 of which are in intensive care.

More than 350,215 people have been tested statewide, which is about 7.9 percent of the state’s 4.4 million population.

Barren River District Health Department officials confirmed 2,051 total cases in its eight-county district, including 1,339 in Warren, 244 in Butler, 210 in Logan, 78 in Edmonson, 63 in Simpson, 66 in Barren, 43 in Hart and eight in Metcalfe. Of those, 1,368 people have reportedly recovered.

Health officials also reported six additional virus-related deaths on Monday, including four newly confirmed in Logan, and one each in both Warren and Butler. The 57 total deaths districtwide include 14 in both Butler and Logan, 11 in both Warren and Edmonson, three in Simpson, and two in both Barren and Metcalfe.

At least 12.5 percent of Warren County’s population of roughly 130,000 people has been tested as of Sunday, according to Emergency Management Director Ronnie Pearson.

There are at least 154 total coronavirus cases in Allen County, according to the Allen County Health Department, which is not part of the Barren River district.

Some daily totals may shift because of data being reported incorrectly. Additionally, numbers often differ between the state and local sources because of different reporting methods.

LOUISVILLE – Senate Majority Leader Mitch McConnell cruised to the Republican nomination Tuesday in pursuit of a seventh term, but his general…

Why is it always democrats who are "concerned" about voter suppression? Every registered voter had the option to request an absentee ballot. Could it be they are just hedging their bets so they can cry foul later on, or is it just that democrats are to stupid to be proactive or follow directions?

Personally, I think it is both...