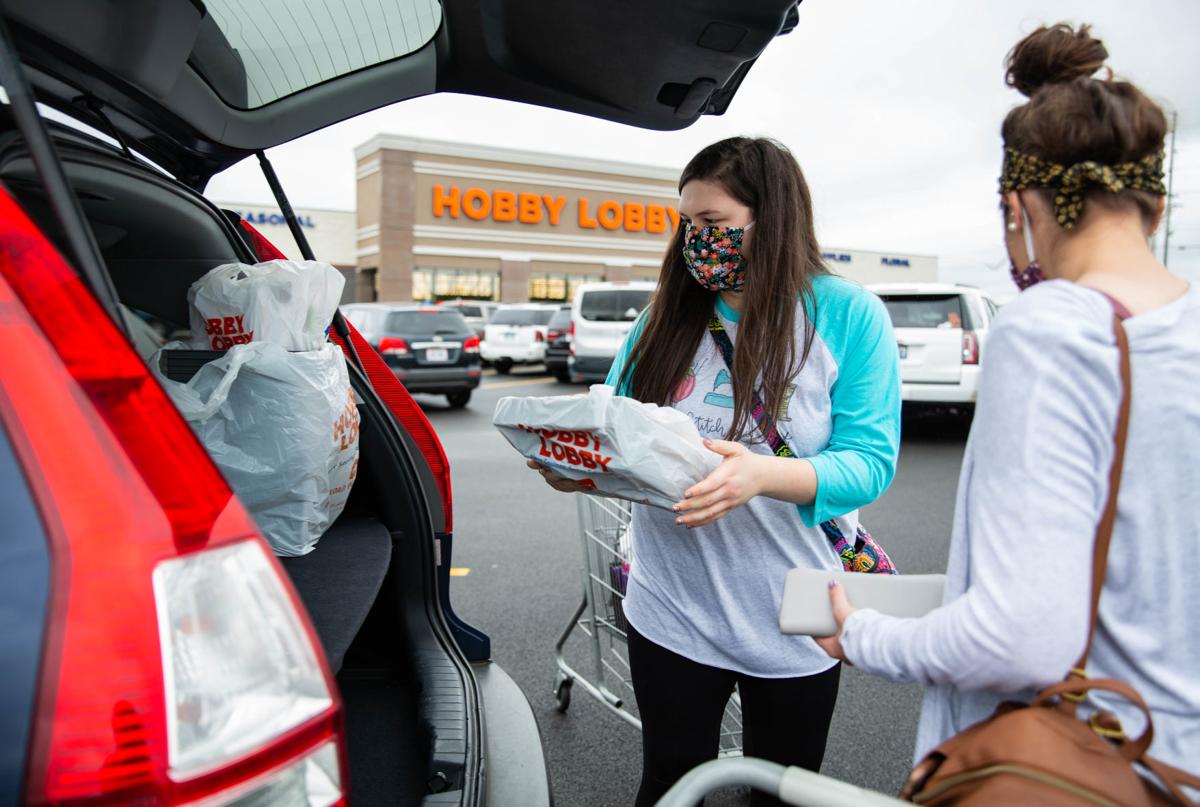 Sarah Creek (left) loads bags into the trunk of her vehicle after shopping at Hobby Lobby with her mother, Sonya, and her sister Taylor Curtis on WednesdayMay 20, 2020. As part of Phase I of Gov. Andy Beshear’s “Healthy at Work” plan, retail and houses of worship began to reopen Wednesday following the governor’s guidelines, such as social distancing and wearing face masks. 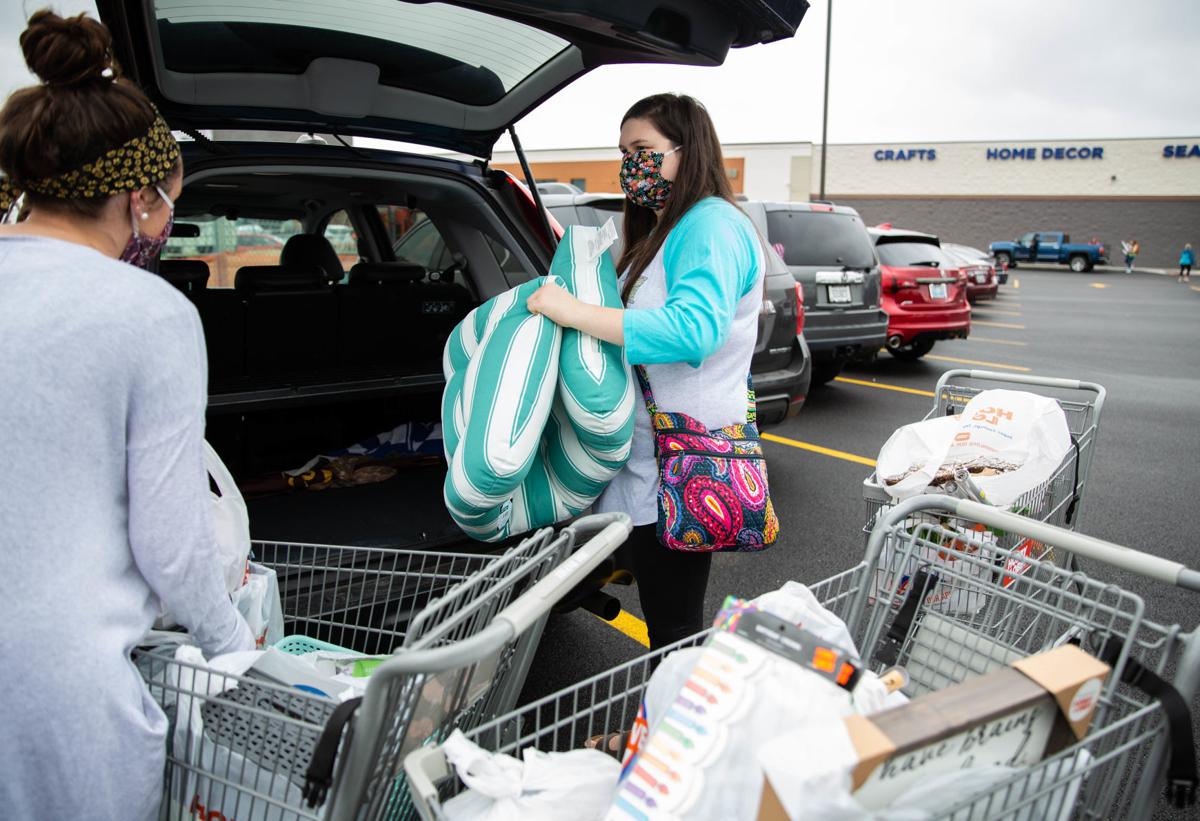 Sarah Creek, right, loads bags into the trunk of her vehicle after shopping at Hobby Lobby with her mother Sonya and her sister Taylor Curtis on Wednesday, May 20, 2020. As part of phase one of Gov. Andy Beshear’s “Healthy at Work” plan, retail and houses of worship began to reopen Wednesday following the governor’s guidelines, such as social distancing and wearing face masks. (Grace Ramey/photo@bgdailynews.com)

Sarah Creek (left) loads bags into the trunk of her vehicle after shopping at Hobby Lobby with her mother, Sonya, and her sister Taylor Curtis on WednesdayMay 20, 2020. As part of Phase I of Gov. Andy Beshear’s “Healthy at Work” plan, retail and houses of worship began to reopen Wednesday following the governor’s guidelines, such as social distancing and wearing face masks.

Sarah Creek, right, loads bags into the trunk of her vehicle after shopping at Hobby Lobby with her mother Sonya and her sister Taylor Curtis on Wednesday, May 20, 2020. As part of phase one of Gov. Andy Beshear’s “Healthy at Work” plan, retail and houses of worship began to reopen Wednesday following the governor’s guidelines, such as social distancing and wearing face masks. (Grace Ramey/photo@bgdailynews.com)

“People are really working, and really trying hard, and being really thoughtful about how they do it,” he said. “We’re going to want to see at least two weeks of data ... but we are certainly going to be open to increasing capacity (in stores).”

On March 22, Beshear ordered all nonessential retailers to close to in-person services in an effort to combat the spread of the coronavirus.

Under Beshear’s Healthy at Work reopening guidance, retail stores were allowed Wednesday to resume in-person operations at 33 percent of the maximum legal capacity if people can maintain “6 feet of space between each other.” If unable to do so, businesses are required to reduce the amount of people to “the greatest number that permits proper social distancing.”

In his daily briefing in Frankfort on Wednesday, Beshear announced 166 new virus cases statewide, 108 of which are probable, bringing the state total to 8,167. He also reported 10 additional virus-related deaths, increasing the statewide death toll to 376.

Asked how the number of people in the ICU fell from 269 to 98 in one day, Beshear said it is due to different groups reporting data, as well as when it is reported.

“That many people didn’t leave the ICU yesterday, it’s that we weren’t receiving reports every time somebody left,” he said. “That is a legitimate criticism. That is a very big shift and it means we’re not getting data in the way that we should, and we’ve gotta be better moving forward on that.”

He noted that the overall hospitalization rate is down – and could be even lower due to the reporting methods. Later in the briefing, he said the time it takes to “stabilize” patients has also decreased.

The Barren River Area Development District’s COVID-19 Dashboard, which uses data from the state Department of Public Health, showed 1,383 cases Wednesday in its 10-county region. Those include 863 in Warren, 217 in Butler, 101 in Logan, 51 in Edmonson, 43 in both Allen and Simpson, 38 in Barren, 18 in Hart, six in Monroe and three in Metcalfe.

The Barren River District Health Department did not provide a case update Wednesday due to a data system update, according to an email Wednesday afternoon from spokeswoman Ashli McCarty.

The district update Tuesday announced 1,260 total cases: 818 in Warren, 208 in Butler, 48 in Edmonson, 98 in Logan, 36 in Simpson, 29 in Barren, 20 in Hart and three in Metcalfe. Of those, 464 people have reportedly recovered. The department also reported 23 deaths, including nine in Edmonson, six in Butler, three in both Warren and Logan and two in Simpson.

There are at least 43 confirmed cases in Allen County, according to the latest update Monday from the Allen County Health Department, which is not part of the Barren River district.

On Saturday, a team of five volunteers arrived at The Medical Center at Bowling Green to assist in the coronavirus units, according to a statement Tuesday from Executive Vice President Jill Payne. The team includes WKU staff members, along with medical, nursing and public health students.

Cases in Warren County have been on the rise in recent weeks, and the county has the second-highest rate of coronavirus cases statewide at 863.

Beshear said Wednesday there are no new cases of the virus-related illness pediatric multi-system inflammatory syndrome, leaving the statewide total at four. He added that the state has finished following up with all 109 juveniles diagnosed with the coronavirus statewide and said they “are doing OK.”

He also said $300 million in federal Coronavirus Aid, Relief and Economic Security Act funds has been awarded to city and county governments to help reimburse expenses related to the public health emergency because of the virus.

“I think where people are trending is games without fans because it’s the mass number … of fans that can spread (the virus,)” he said. “I want to be cognizant that these are student athletes … they’re not paid professionals and we want to make sure that it is safe for them.”

In response to a question about reopening public pools, Beshear said “certain” public pools or complexes might be able to open when groups of 50 or fewer people are allowed to gather again in July. Aquatic centers used for exercise and lap swimming are able to reopen June 1.

Asked about the drug hydroxychloroquine as a potential treatment for the virus, Beshear said to “listen to your medical provider.”

“This is a drug that to date has not been proven an effective treatment. In fact, it’s been proven that it can be harmful,” he said.

President Donald Trump, who has not tested positive for the virus, announced Monday that he has been taking the anti-malaria drug for about a week.

“You’d be surprised at how many people are taking it, especially the front-line workers, before you catch it,” he said.

White House physician Sean Conley said in a statement that he and Trump “concluded the potential benefit from treatment outweighed the relative risks,” according to The Associated Press.

Greenwood Mall, other retail prepares for reboot – with caution

As Kentucky prepares to reboot retail activity in the state, you don’t need a temperature check or a nasal swab to know retailers are ailing. …