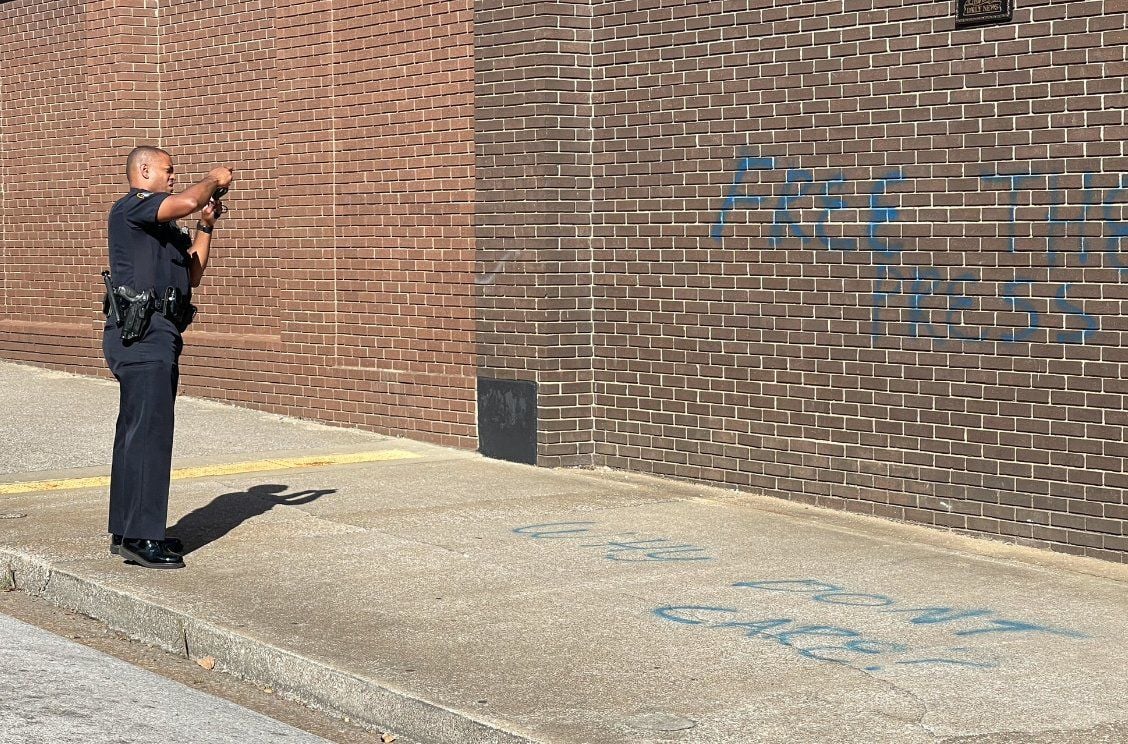 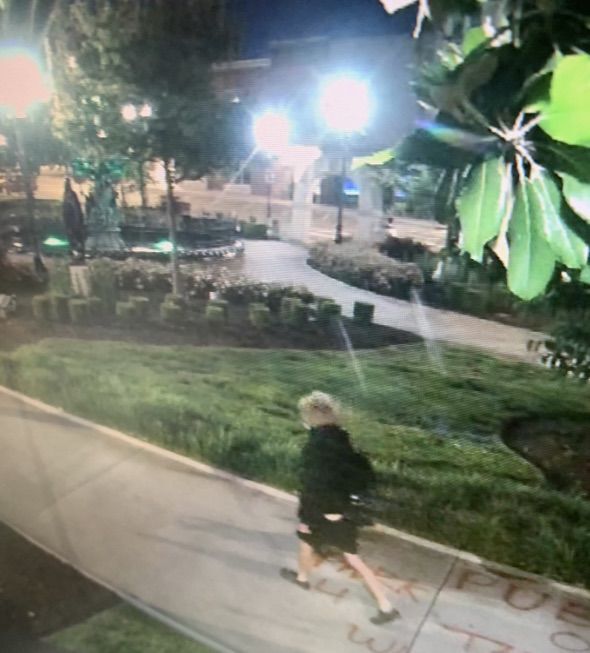 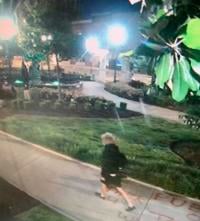 The Bowling Green Police Department released this surveillance image of a man possibly connected to the widespread graffiti found in downtown Bowling Green on Friday, May 21, 2021. 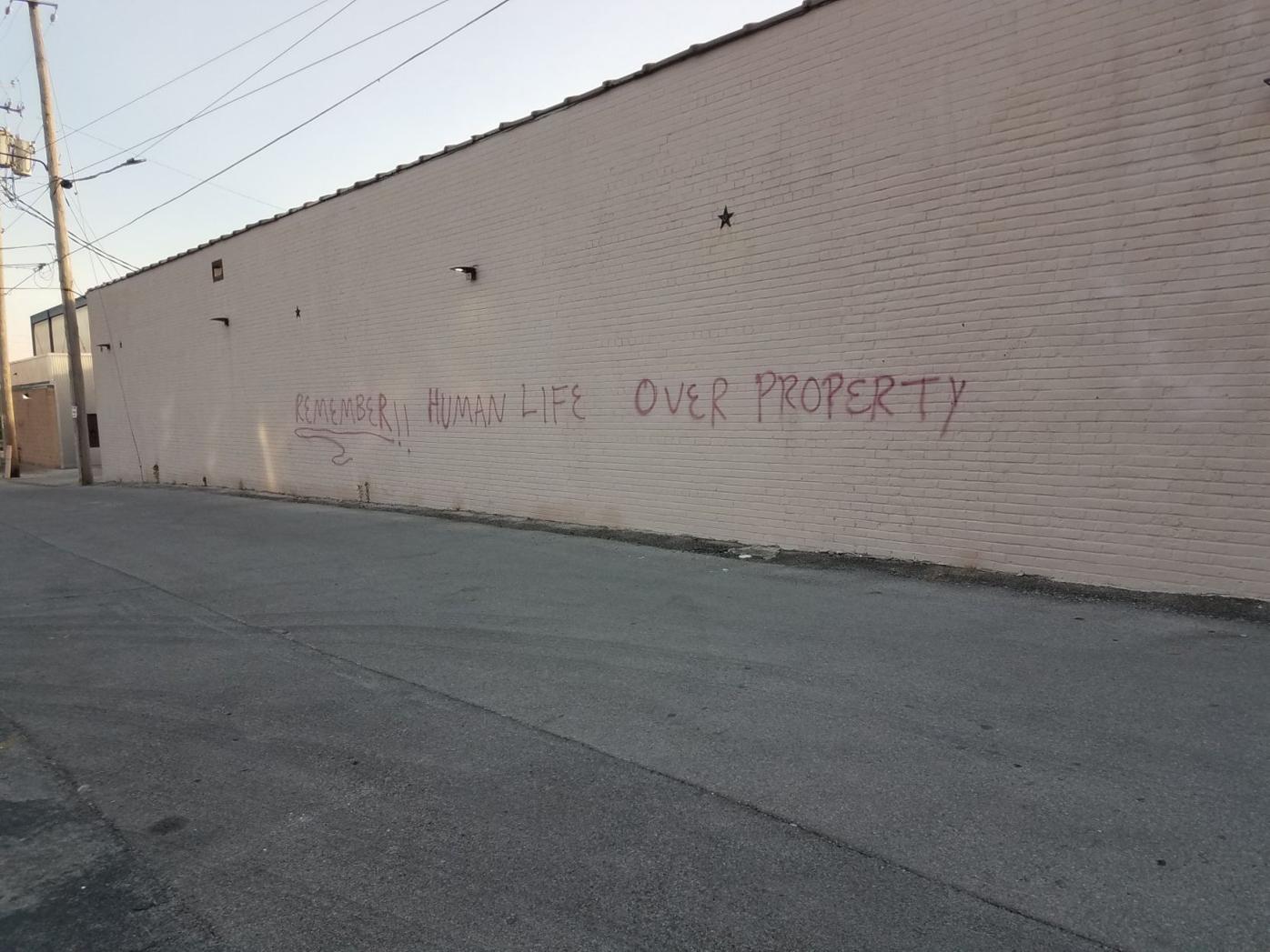 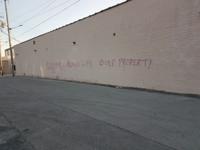 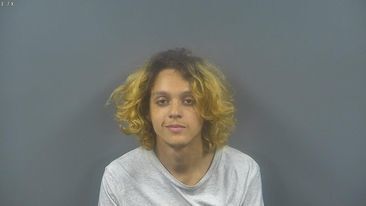 The Bowling Green Police Department released this surveillance image of a man possibly connected to the widespread graffiti found in downtown Bowling Green on Friday, May 21, 2021.

A Bowling Green man pleaded guilty Tuesday to several charges that arose from the spray-painting of various politically charged messages on downtown buildings.

“I wrote several messages with spray paint,” Hernandez-Cerrito said in court. “I believe that some of them included messages along the lines of holding public leaders accountable as well as a question that I proposed along the lines of why does it take vandalism for people to be willing to listen.”

The messages were found May 21. One message left on the sidewalk in Fountain Square Park read, “A public park only for the rich who live on the square.”

Graffiti left on the Daily News’ building on College Street included messages such as “Report news not propaganda,” “Yellow journalism is not news” and “Free Palestine.”

Hernandez-Cerrito was indicted July 28 by a Warren County grand jury and arrested Oct. 8.

Under terms of the plea agreement, Hernandez-Cerrito was sentenced to two years in prison in the case and will be ordered to pay $4,178.54 in restitution to the entities named as victims.

At the time of his arrest, he was on probation stemming from a 2020 conviction for first-degree trafficking in a controlled substance, and he will be directed to serve two years in prison on that case after finishing the two-year sentence related to the graffiti.

Hernandez-Cerrito’s attorney, Rebecca Doerr of the state Department of Public Advocacy, argued for probation ahead of being formally sentenced Tuesday by Warren Circuit Judge John Grise.

“This is a young man who I believe has aspirations to be active in his community, to be politically active and participate in the process,” Doerr said. “I think that he admits that he probably went about that the wrong way. We have talked about that, what is and is not an appropriate way to be an activist, that he would probably be more successful in his endeavors outside jail and doing them in a legal way. I believe he has good intentions and I believe that he understands the error of his ways.”

Warren County Assistant Commonwealth’s Attorney Daniel “Tres” Miller opposed probation on the grounds that it would unduly depreciate the serious nature of the charges.

“He targeted four small businesses and two government entities that are really all there to serve the public,” Miller said. “It’s not any policy-making (entity), it’s public works and (city) parks and recreation ... to date I have not heard Mr. Hernandez-Cerrito have any remorse for his actions whatsoever.”