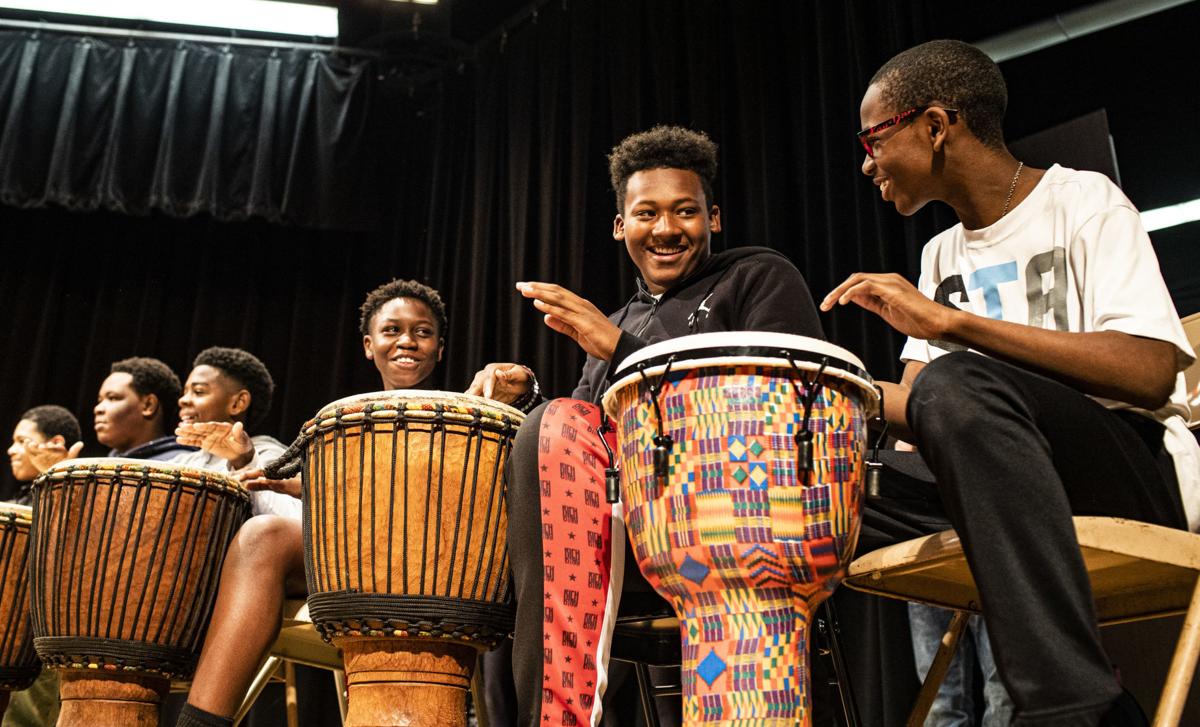 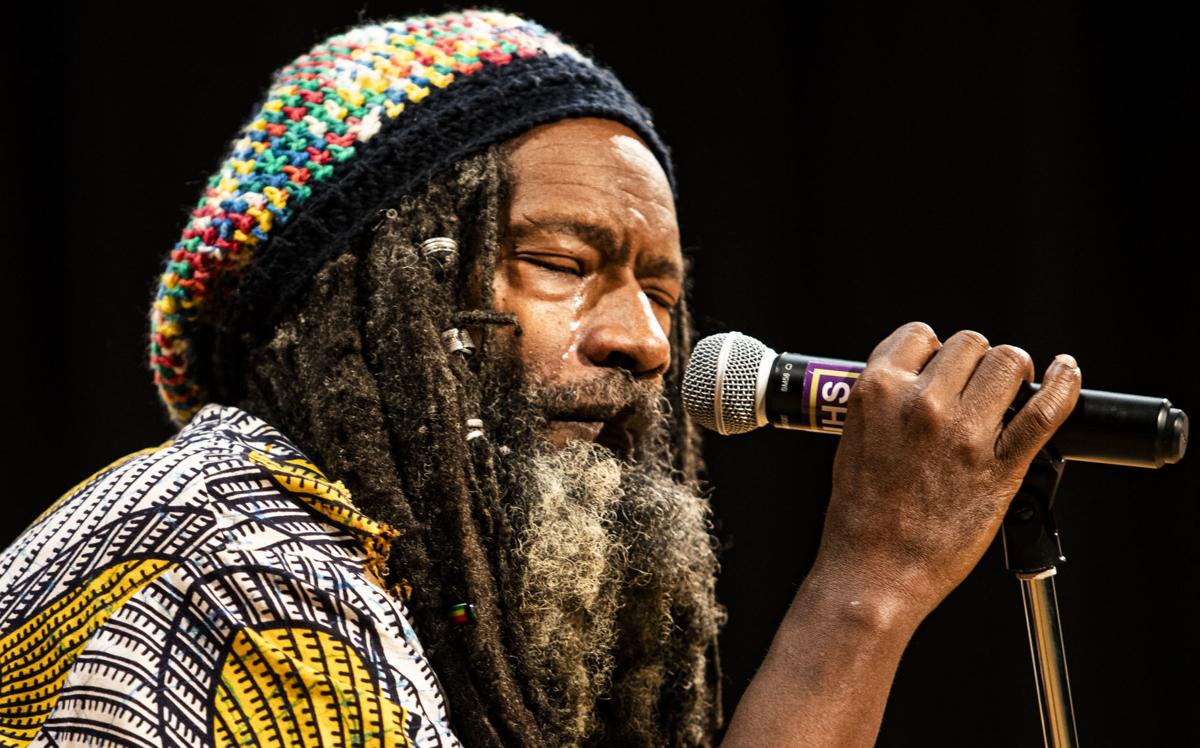 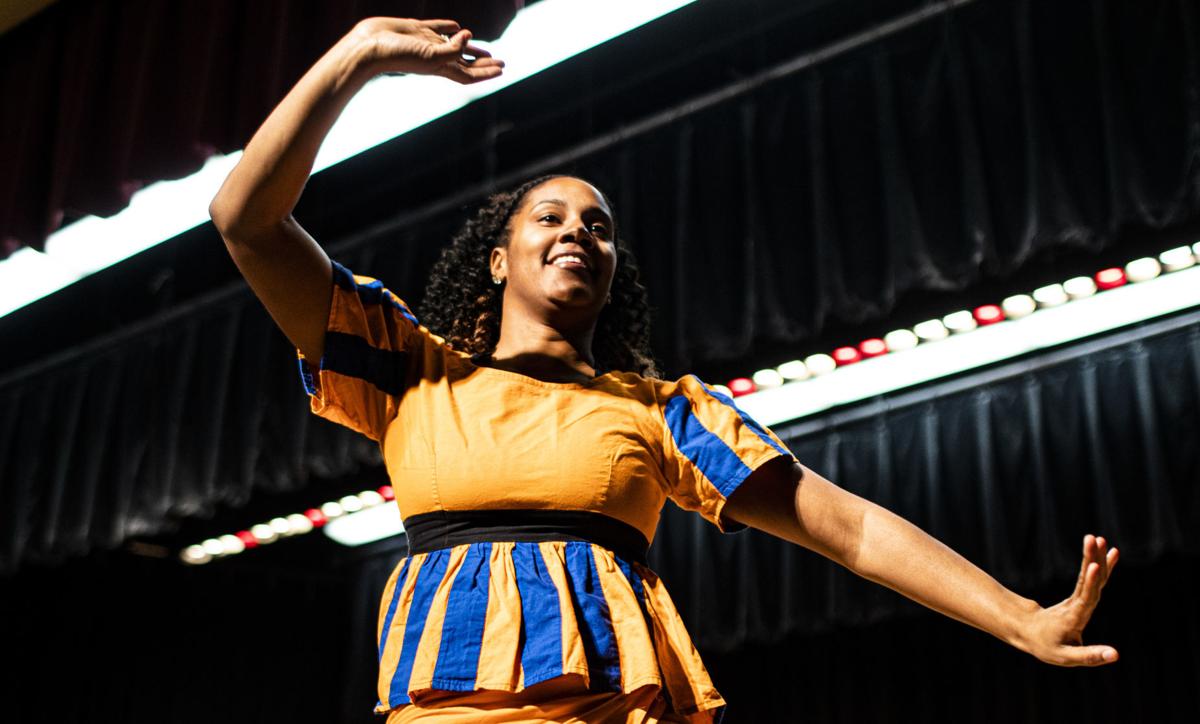 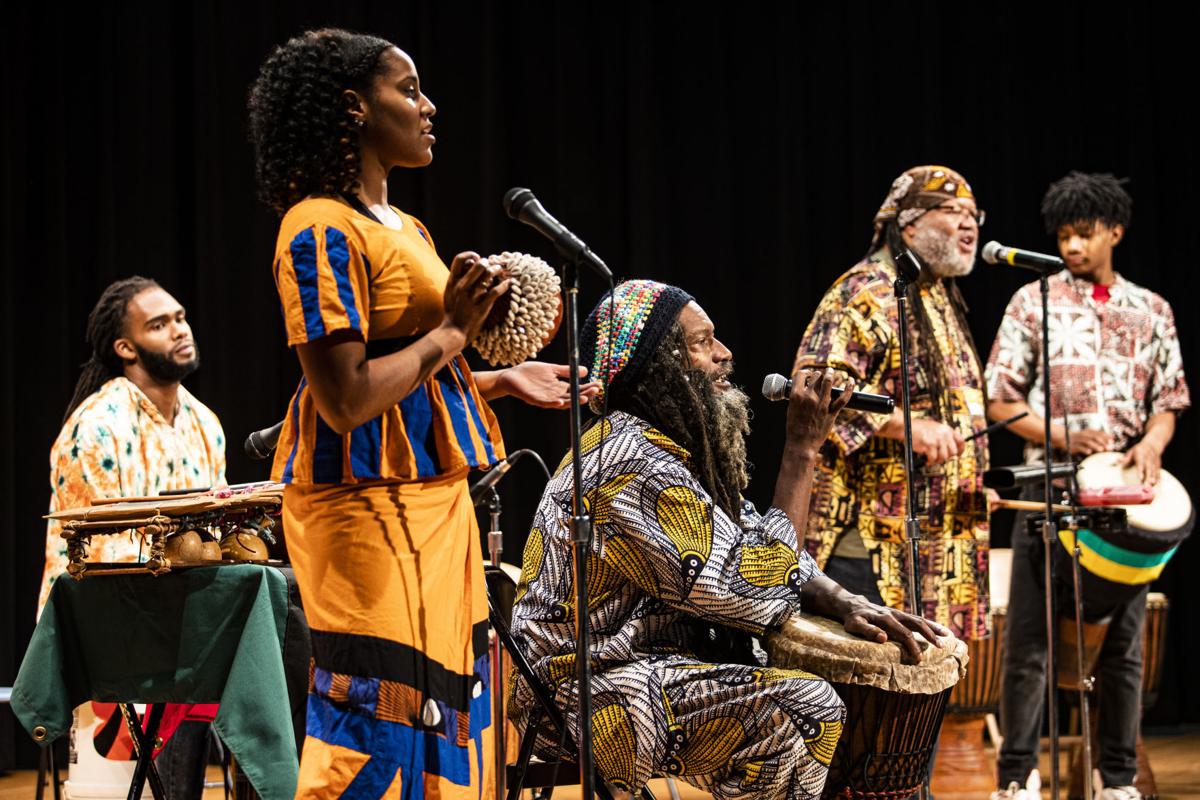 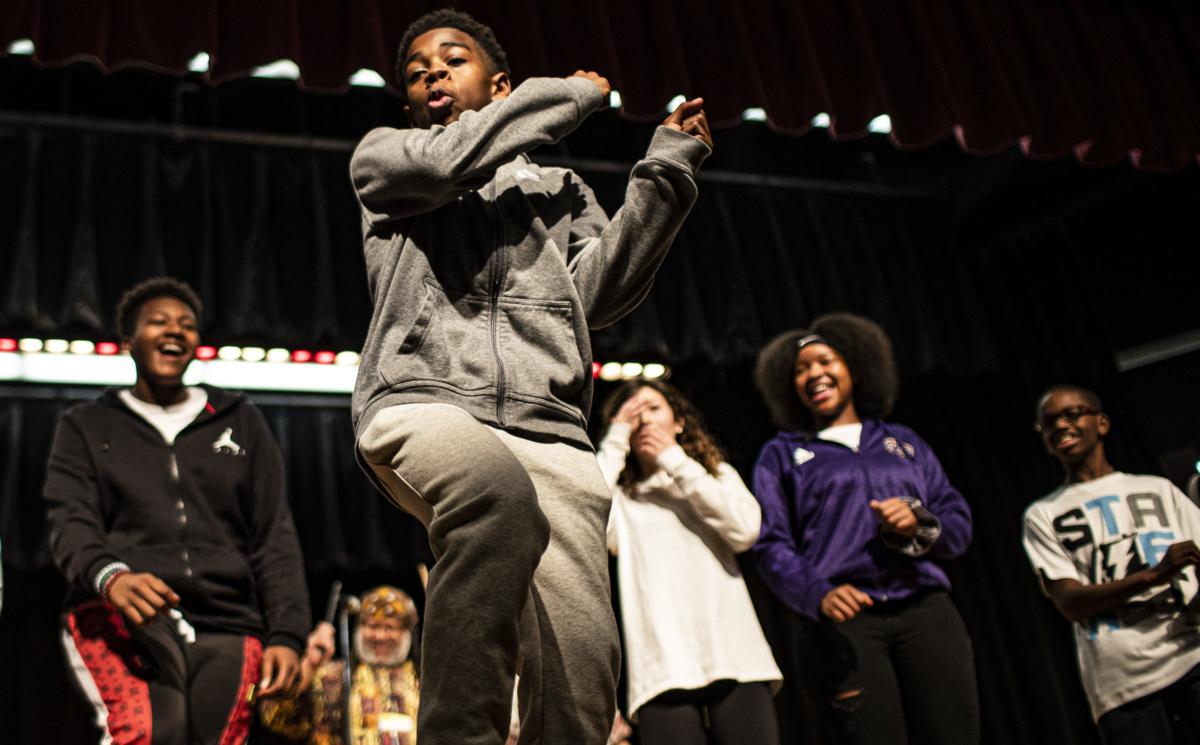 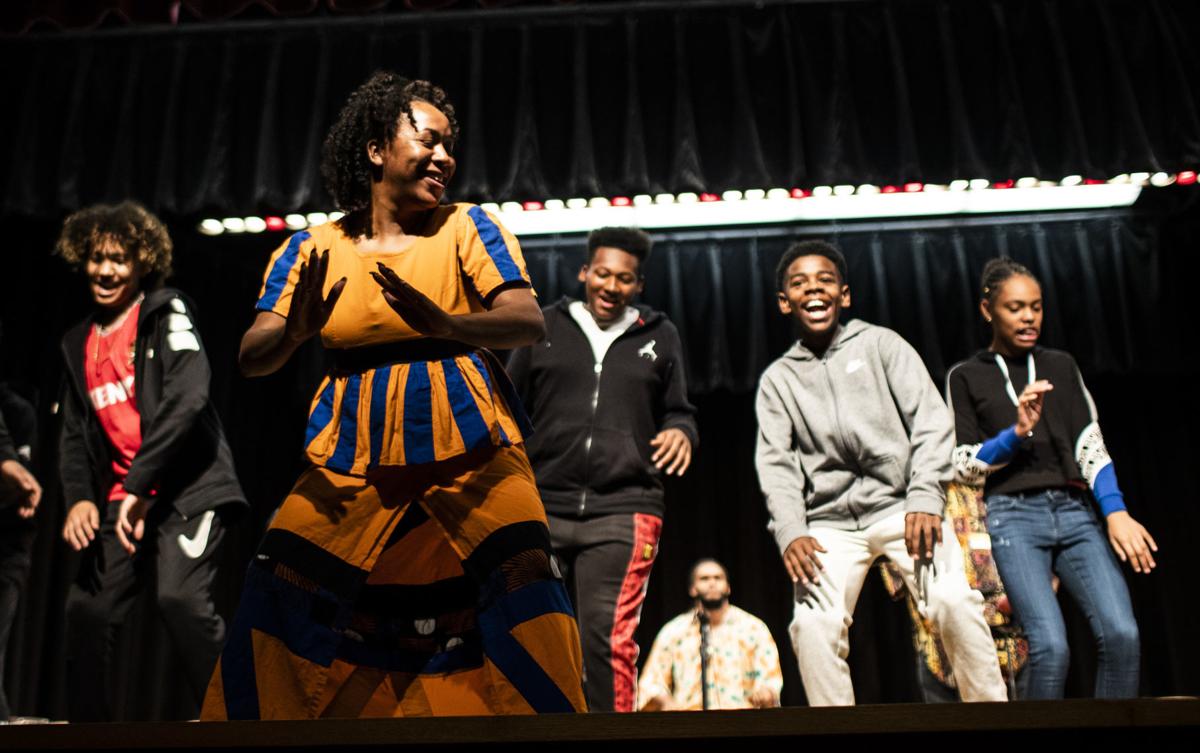 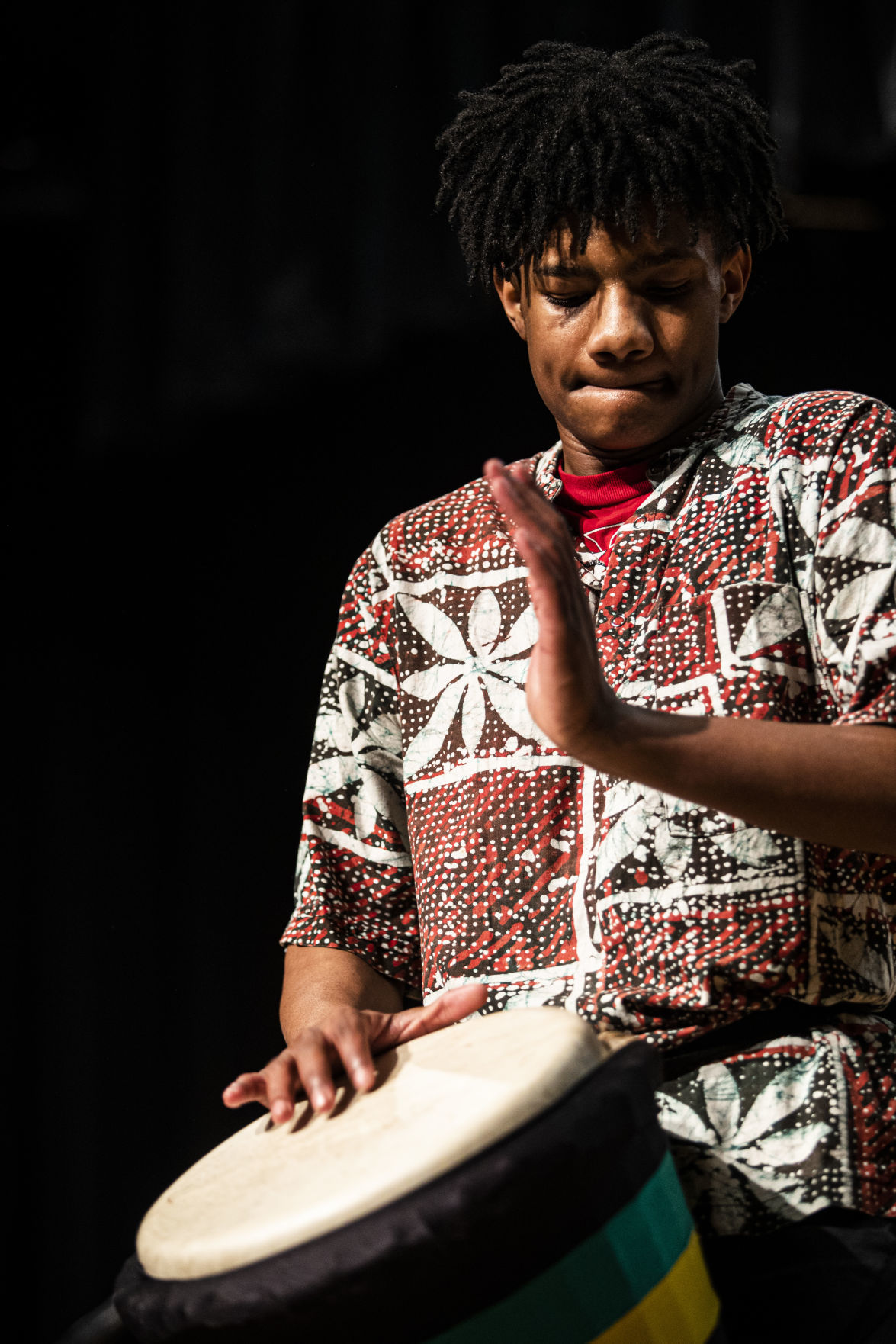 “The world is changing. You all got to make the change,” said the Nashville-based artist, who leads the traditional African dance, music and spoken word group Baba Musa and Natures Drummers.

Garbed in patterned dresses of blue, orange and black, the group’s dancers regularly showcase celebratory West African dances like the Manjani and the Yankadi-Makru in schools throughout the region. But Musa’s message to students was focused on the here and now.

At one point, during the school’s Black History Month celebration, he prompted students to imagine a world of perfect unity, one knitted together with love, righteous living, good health, harmony and above all – action.

“You all will be running things, and we can’t continue to go along and live the way we’re doing,” Musa said, alluding to issues like gun violence in schools, climate change and equal justice for all people. “Make the world a better place for your children.”

Asked what he hoped BGJHS students would take away from the experience, Musa said “an appreciation of the diversity that people have in this country.” It’s also one students aren’t likely to experience anywhere else, he added.

“A lot of what we do is not in books” in any classroom, he said.

Thursday’s performances, held for students throughout the morning, took on communal vibes. As percussionists kept a beat, Musa guided students in call-and-response songs.

“Djembe means unity. Unity is togetherness,” Musa said, explaining how the drums that take their name from the word are made from wood, goatskin, rope and metal rings.

Brother KHAOS, whose Facebook page can be found at Khaotic VERSE, performed a piece exploring happiness. The theme has relevance in an age characterized by division, he said.

“I think that everybody ought to concentrate on being happy and making other people happy,” he said.

At one point, students were invited on stage to join the group, with Musa guiding them through different ways to make a beat.

“When you hit it, pretend like it’s a hot stove and take your hand off it,” he said, teaching the technique to create one big booming note.

The students seemed to catch on quickly.

“They sound professional, don’t they?” Musa asked the audience, later turning it over the dancers to show the students some moves.

Eighth grader Jonathan Hunter was among the students who joined in.

“I really enjoyed it. It was very inspiring toward my culture,” he said.

His classmate Robbie Dye contributed to the show as a guest performer playing his own djembe. For Robbie, it was a familiar experience, but one he appreciated.

His mother often organizes drum circles, he said, and she lent the group some spare drums.

“It’s just great to learn about my culture,” he said.

“It was really funny and fun and educational. I just hope we get to do more of this in the future,” he said.