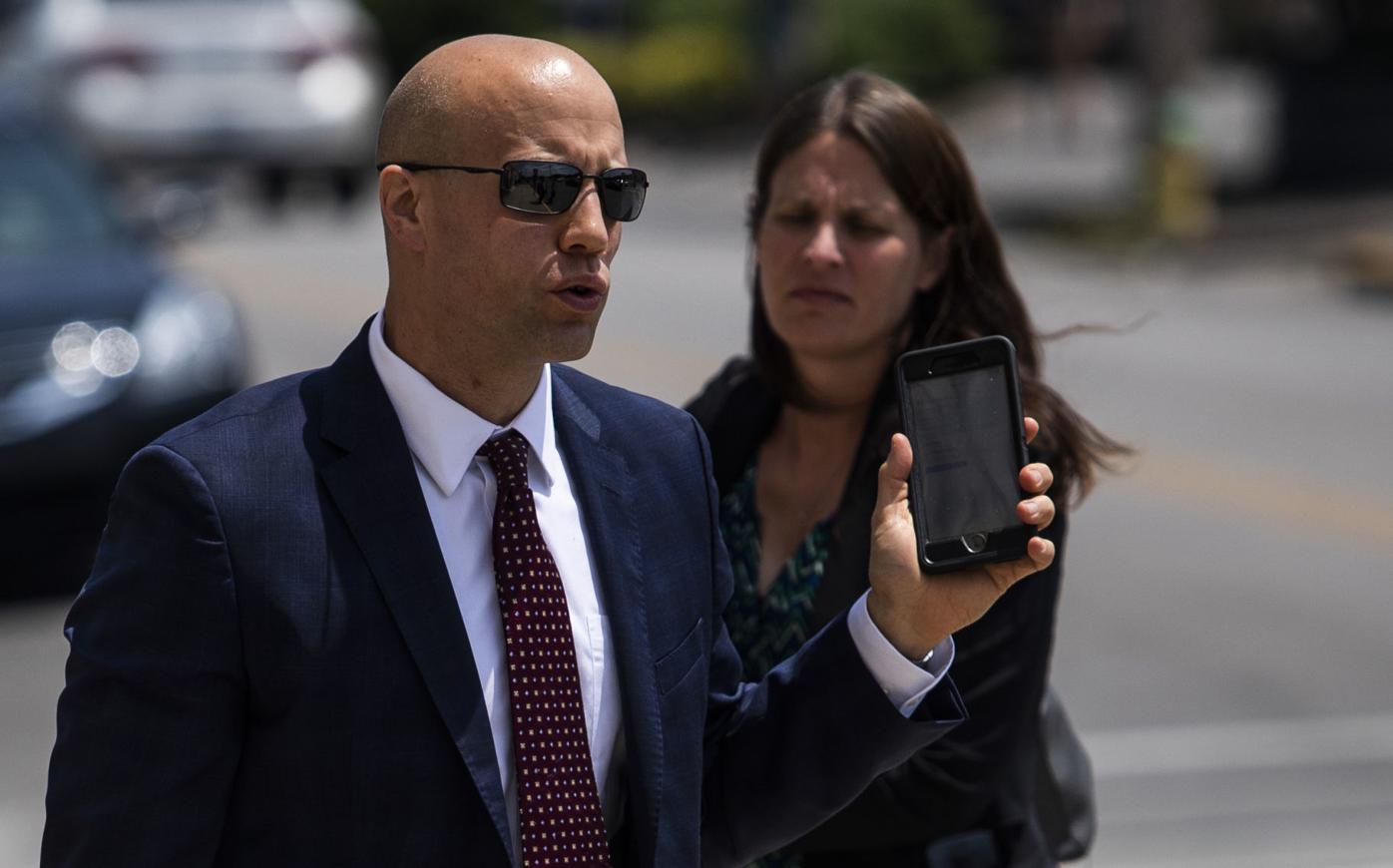 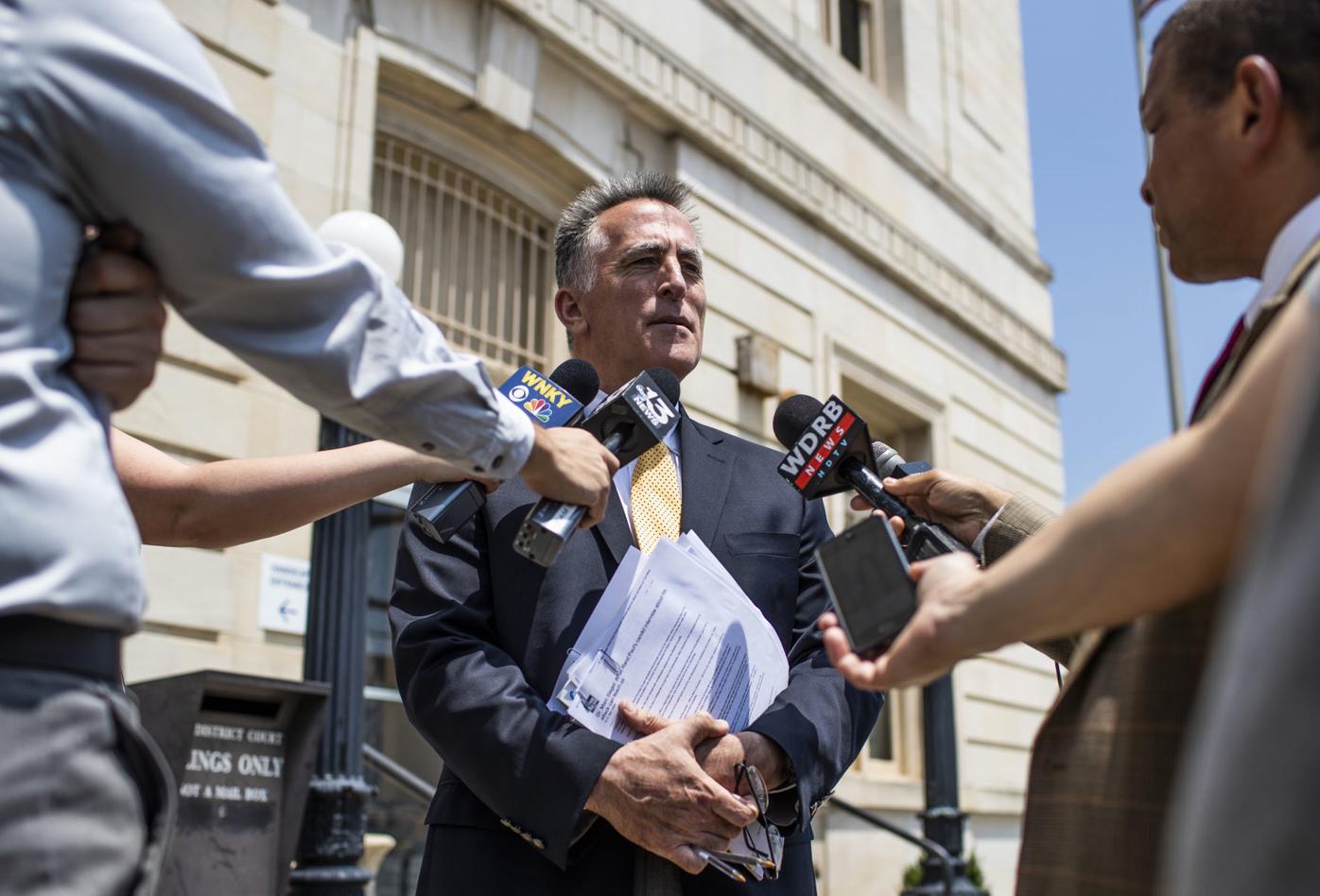 Attorney Matt Baker speaks to media after Dr. Rene Boucher was sentenced to 30 days in prison, a $10,000 fine and 100 hours of community service after pleading guilty to assaulting Sen. Rand Paul on Friday, June 15, 2018, at the William H. Natcher Federal Courthouse. (Austin Anthony/photo@bgdailynews.com) 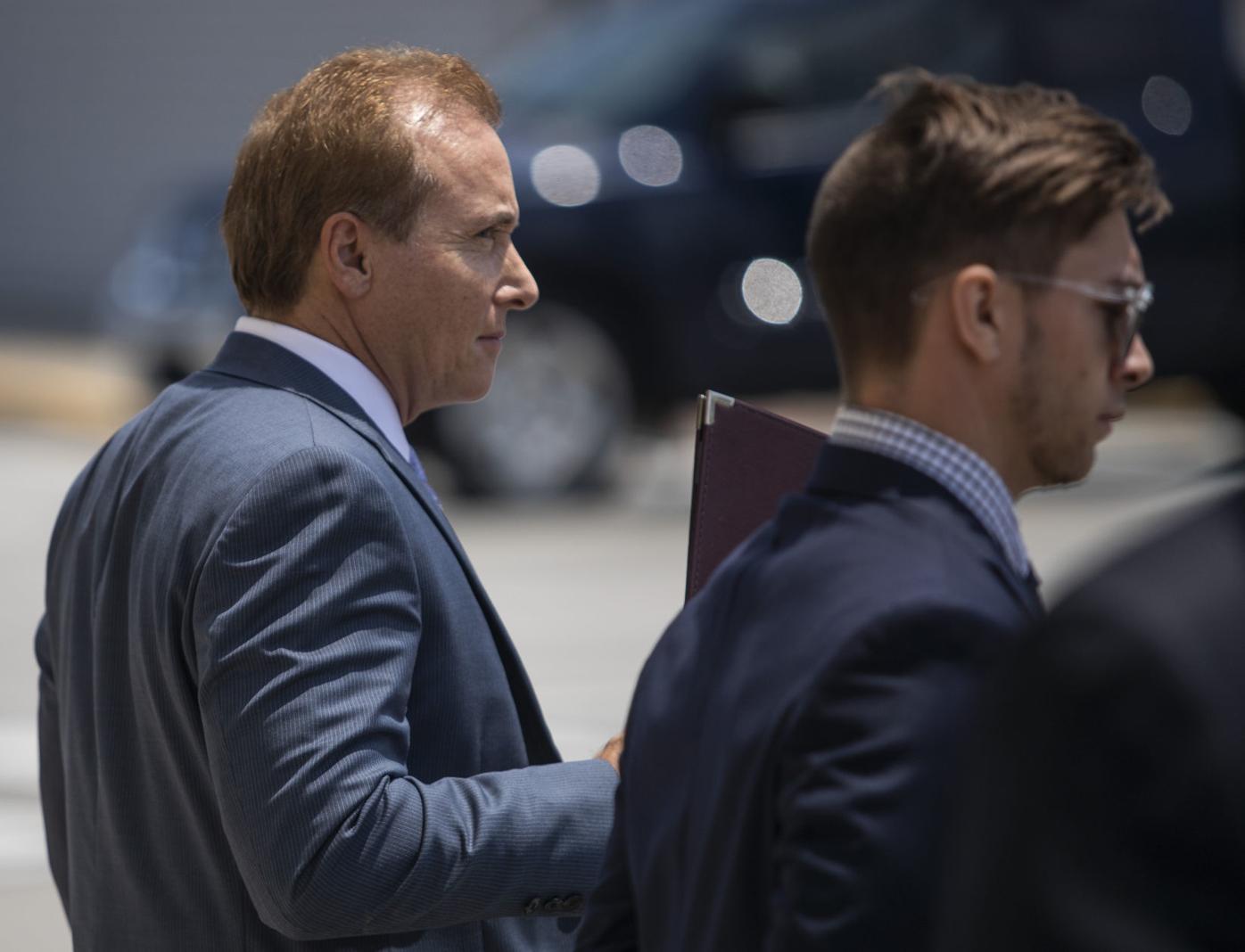 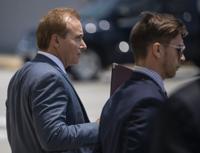 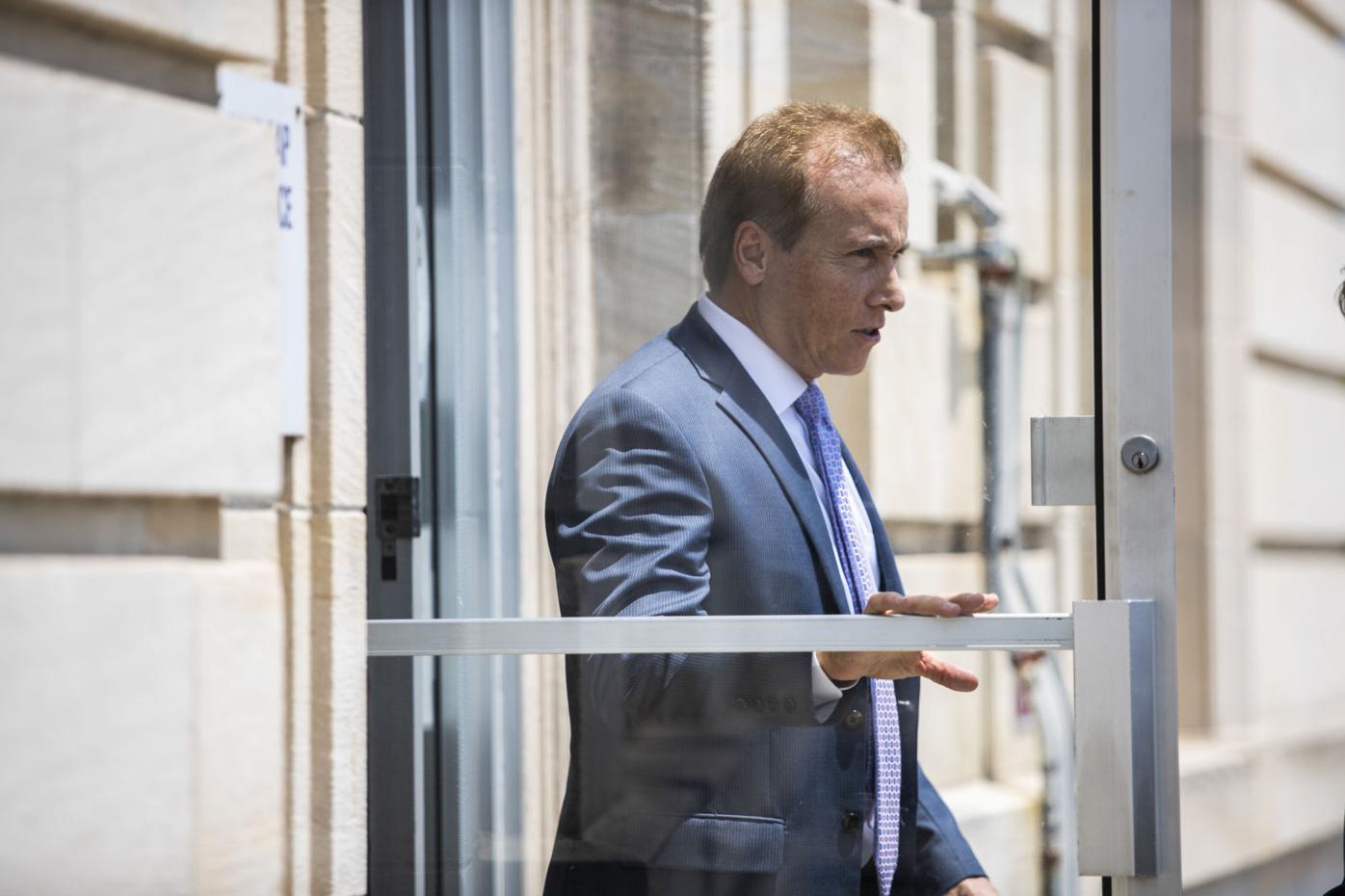 Attorney Matt Baker speaks to media after Dr. Rene Boucher was sentenced to 30 days in prison, a $10,000 fine and 100 hours of community service after pleading guilty to assaulting Sen. Rand Paul on Friday, June 15, 2018, at the William H. Natcher Federal Courthouse. (Austin Anthony/photo@bgdailynews.com)

Dr. Rene Boucher will serve 30 days in prison for the assault of U.S. Sen. Rand Paul, bringing to an end a case that attracted considerable intrigue for several months.

Special Judge Marianne Battani sentenced Boucher, 60, on Friday in U.S. District Court on the charge of assaulting a member of Congress, levying a $10,000 fine and ordering Boucher to perform 100 hours of community service following his release from prison, during which he will be on supervised release for a year.

Boucher, a retired physician, was charged with the federal crime after tackling Paul, his neighbor in the Rivergreen subdivision in Bowling Green, on Nov. 3 while Paul was doing yard work.

In his first public remarks on the matter, Boucher expressed remorse for his actions.

“What I did was wrong and I’m sincerely sorry for what I did,” Boucher said in court. “It’s not something I’m proud of, I’m embarrassed and I hope (Paul) and his family will one day be able to accept my apology, if possible. I lost my temper and I did not behave well, and I was wrong. I did not think I would be in a courthouse at the center of all this.”

Boucher will be allowed to report to prison at a later date. He left the federal courthouse without speaking to reporters.

Boucher’s attorney, Matt Baker, said his client was relieved to have the case resolved and planned to pay the fine that day.

“I just want to reiterate that Dr. Boucher is glad to have this over with,” Baker said after the sentencing. “I think (Battani) took a look at all the evidence and she saw the big picture.”

Paul did not attend Friday’s sentencing.

Special Prosecutor Bradley Shepard said in court that the senator wished to avoid contributing to “the circus atmosphere ... surrounding this case” by being present, preferring to make the hearing about Boucher’s actions against Paul.

“No one deserves to be violently assaulted,” Paul said in a statement emailed to the Daily News after the hearing. “A felony conviction with jail time is appropriate and hopefully will deter the attacker from further violence. I commend the FBI and Department of Justice for treating this violent, premeditated assault with the seriousness it deserves.”

Shepard sought a 21-month prison sentence, a penalty at the low end of federal sentencing guidelines as they applied to Boucher.

“We believe the original 21-month sentence requested would have been the appropriate punishment,” said Kelsey Cooper, spokeswoman for Paul’s office.

In his argument Friday, Shepard said the Pauls were “apprehensive” about being outside in their own yard following the incident with Boucher and Paul continues to feel the physical effects of the assault, which caused him six broken ribs and recurrent pneumonia.

“When you look at what happened here, it was absolutely deplorable,” Shepard said. “This was not a bar fight, this was not an argument that got out of hand, this was a vicious and unprovoked assault ... that’s not what civilized, educated members of society do to one another.”

Baker requested probation for his client in a sentencing memorandum filed the previous week.

Baker argued for leniency for his client at the hearing, stressing Boucher’s cooperation with authorities during the investigation, his lack of a prior serious criminal history and his work in both the U.S. Army and the community as a doctor.

“If anyone else in Warren County got involved in a scuffle over yard trash, which is what this case is about, we would be in Warren District Court, but not just anybody was involved in this,” Baker said, referring to the venue for misdemeanor assault prosecutions. “We’re not asking for Rene Boucher to be treated any better than anyone else, we’re just asking that he not be treated any worse than anyone else ... if you’re going to punish Dr. Boucher, punish him, but please don’t pound him into submission.”

Battani said the tackling struck her as an “isolated incident” and “aberrant behavior” on Boucher’s part.

“The court does not believe you did this because of Sen. Paul’s political positions or political work,” Battani said to Boucher. “I see this as strictly a dispute between neighbors ... it’s an unfortunate incident that should not have happened. There were other ways to resolve it, and as far as the attack (Paul) was certainly an innocent victim.”

Battani told Boucher she believed he would not commit a similar offense in the future.

Federal court records and interviews with neighbors depict the assault having its roots in yard clippings.

Baker’s filing last week related that Boucher had trimmed the limbs on a few maple trees on Paul’s property when the limbs had grown some distance across Boucher’s property.

Paul had stacked limbs and shrub trimmings in a pile close to the boundary of the property line with Boucher on multiple occasions dating back to last summer, and Boucher would gather each pile and have it hauled away in dumpsters, according to court records.

On Nov. 2, Boucher used gasoline to burn a pile of yard debris constructed off the property line, only for a fireball to result, causing Boucher to suffer second-degree burns on both of his arms as well as the left side of his neck and face.

The tackle of Kentucky’s junior senator occurred the following day.

Jim Skaggs, the developer of Rivergreen, testified Friday that he had no complaints about Boucher, knew him to be friendly and had described him to a reporter as a “near-perfect neighbor.”

Skaggs said Boucher had mentioned the yard debris issue to him, but he did not relate those concerns to Paul and he did not know Boucher to have done so, either.

Warren County Attorney Amy Milliken testified about her involvement in the case.

Boucher was charged initially in state court with fourth-degree assault, a misdemeanor punishable by up to a year in jail.

Boucher was arraigned on the charge before Warren District Judge Brent Potter, but the case was dismissed when federal prosecutors assumed jurisdiction.

Milliken said that, given Boucher’s history and what was known about Paul’s injuries at the time, she would have sought probation in the state case.

Milliken testified about consulting with the Kentucky State Police and Warren County Commonwealth’s Attorney Chris Cohron about what charges to bring against Boucher, saying that the case would have gone to Cohron’s office for presentation to a grand jury as more information emerged about Paul’s injuries.