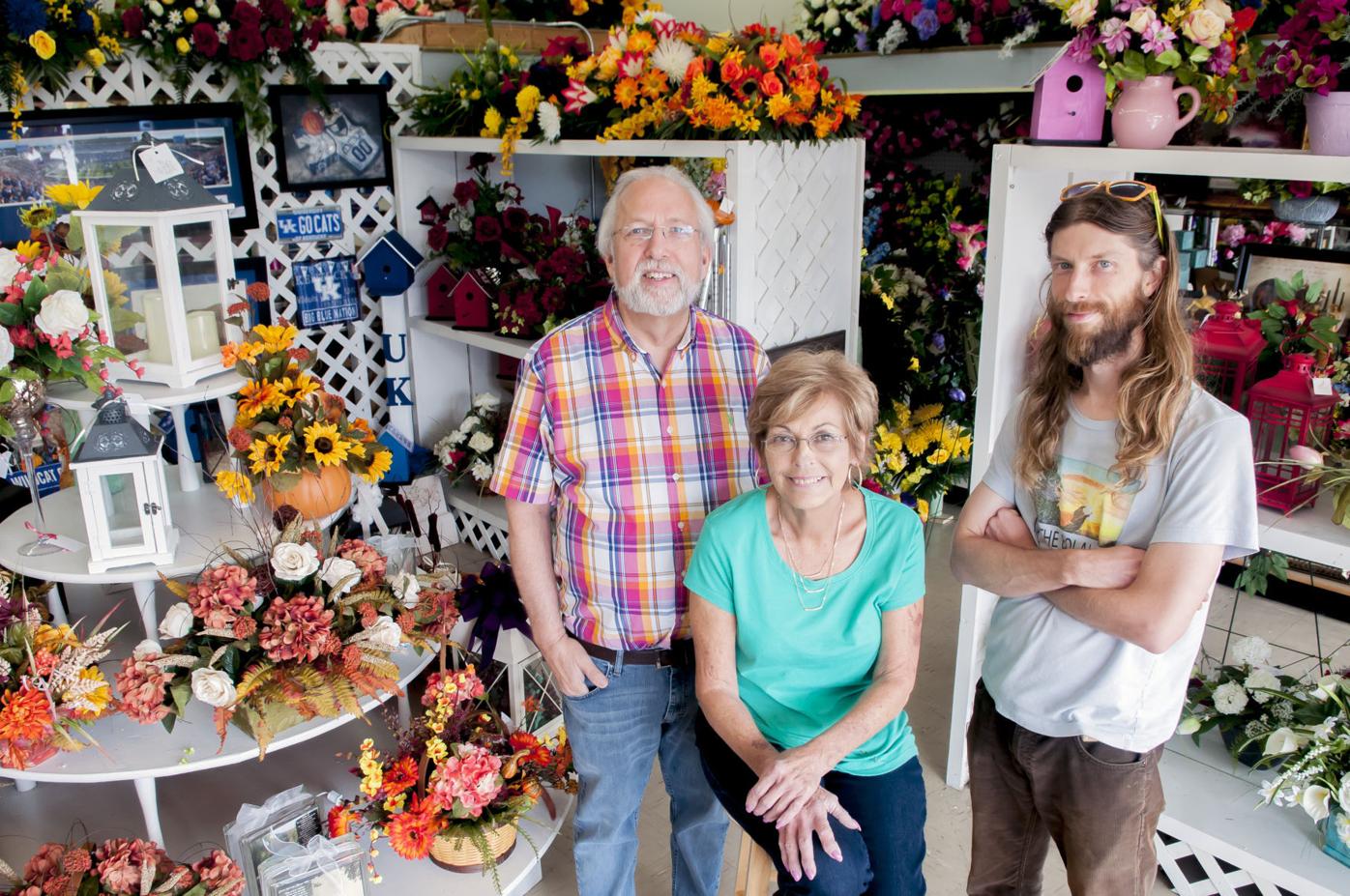 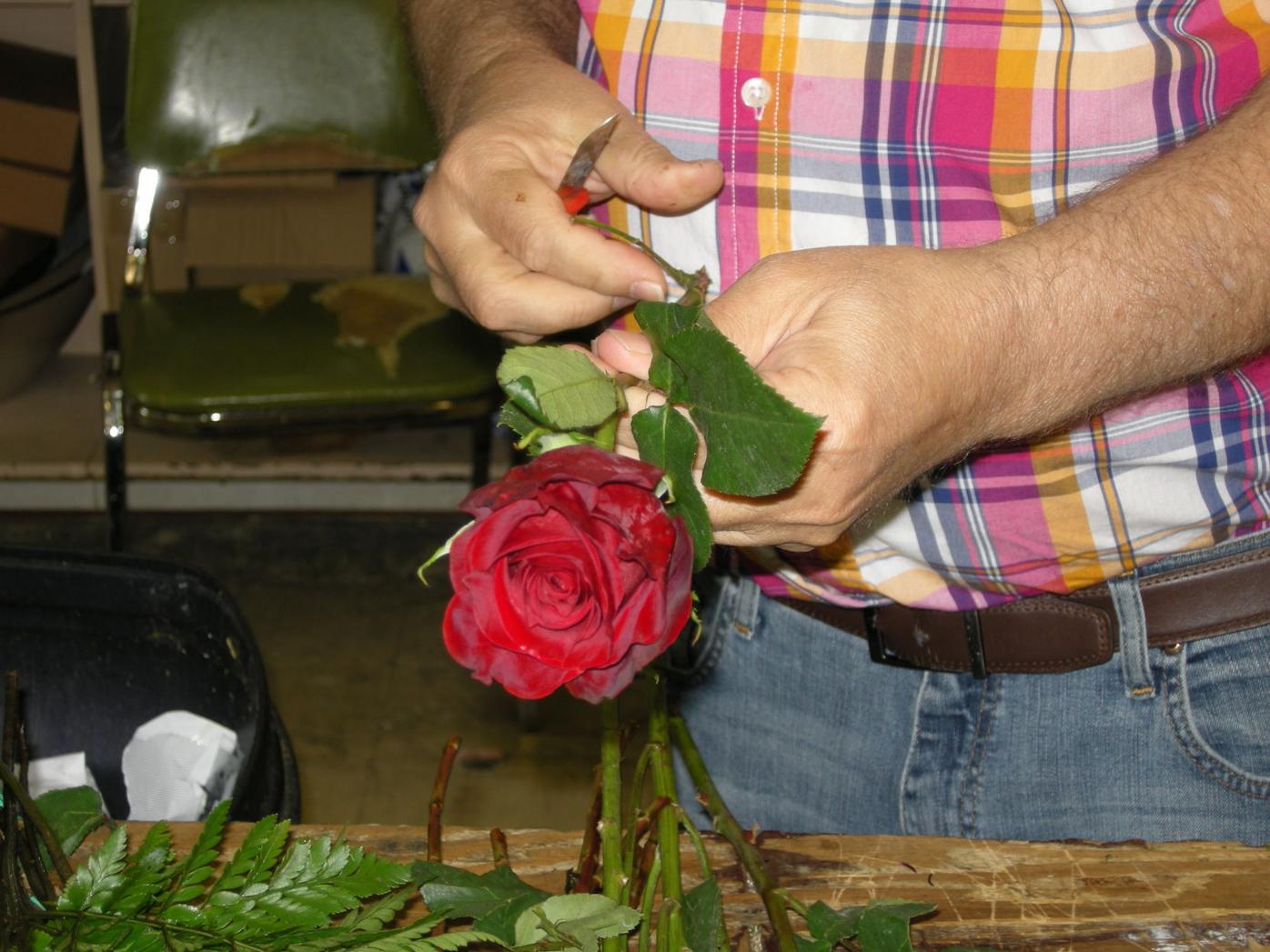 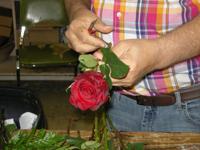 Anthony Madison cuts away the thorns of a rose as he puts together a bouquet. 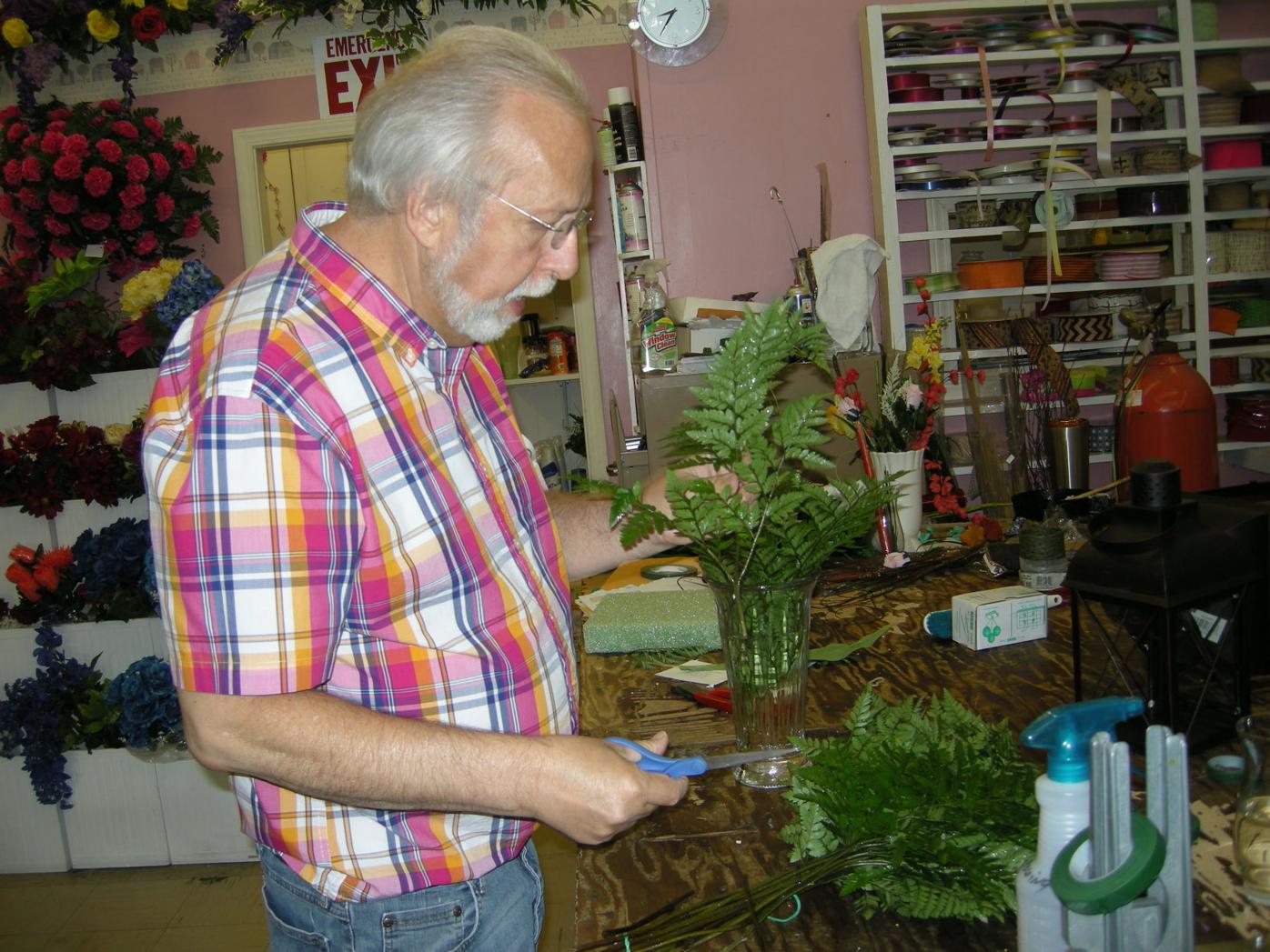 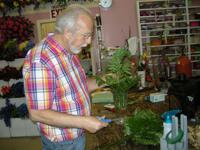 Anthony Madison puts a foundation of greenery, which he said is always the first step of building a bouquet. 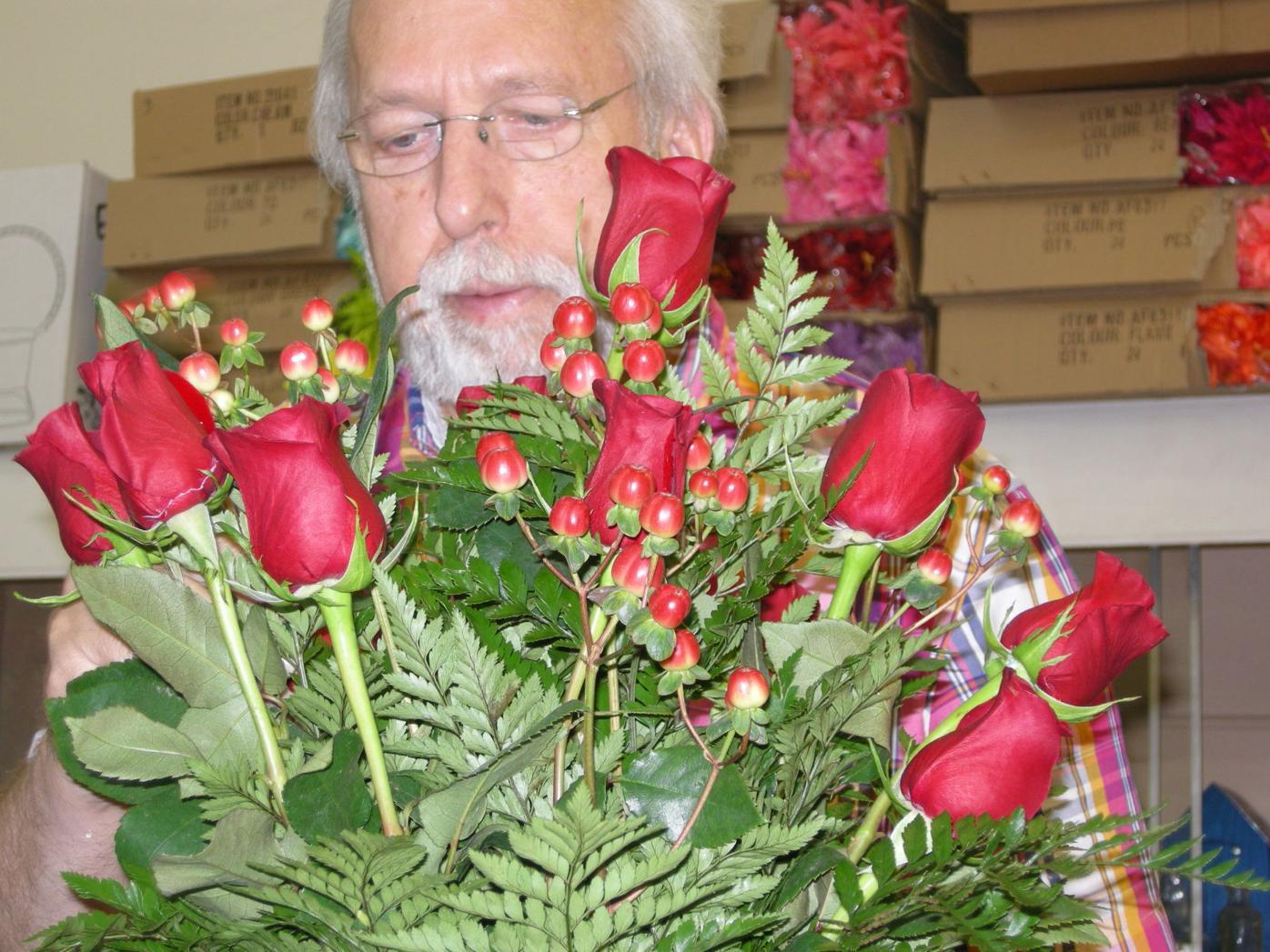 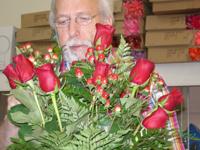 Anthony Madison examines hypernicum berries that have been added to the bouquet. 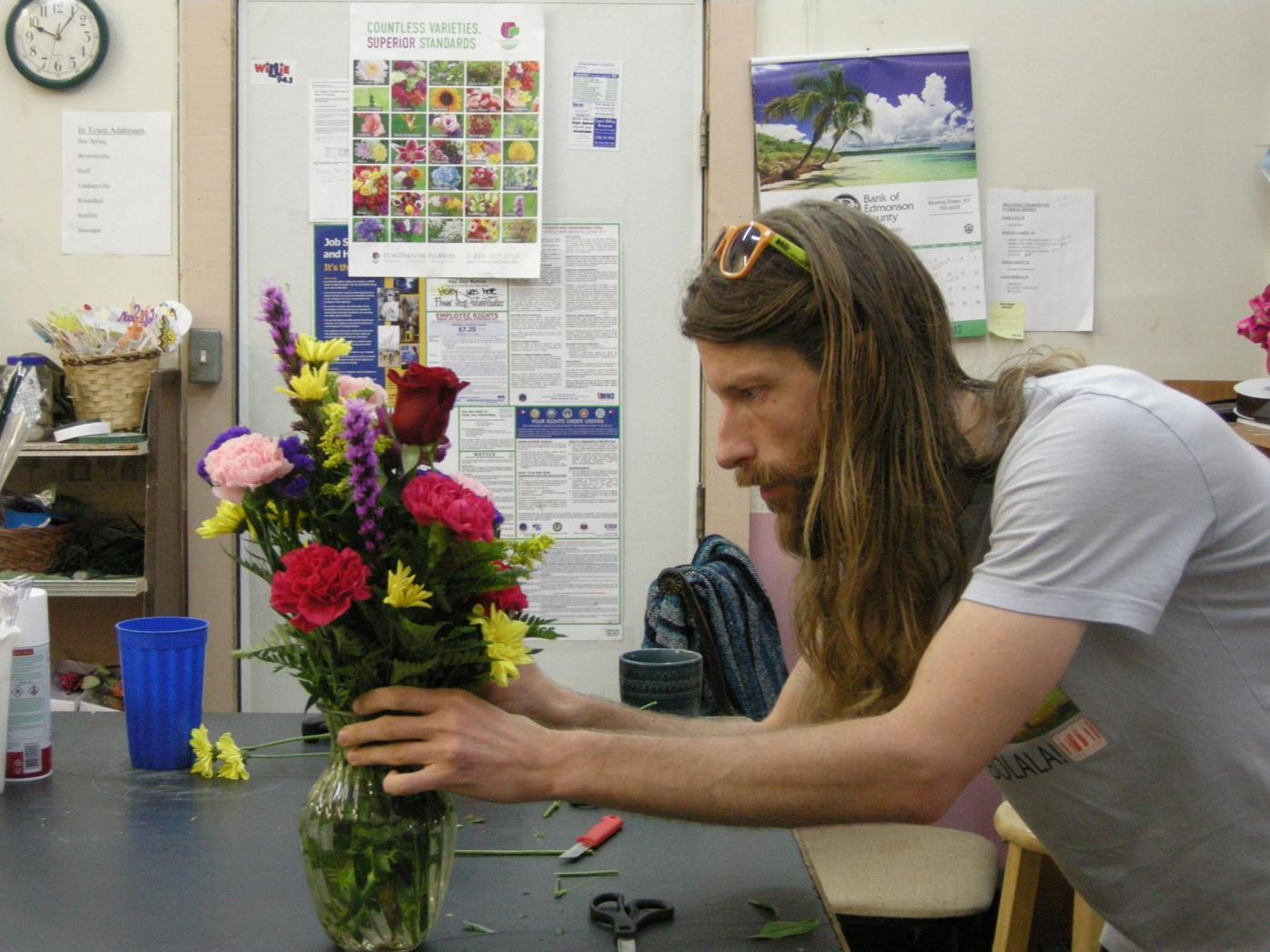 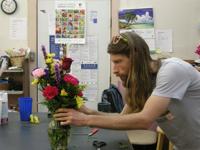 Anthony Madison cuts away the thorns of a rose as he puts together a bouquet.

Anthony Madison puts a foundation of greenery, which he said is always the first step of building a bouquet.

Anthony Madison examines hypernicum berries that have been added to the bouquet.

BROWNSVILLE – What started as a business selling artificial flowers is now the only store left in Brownsville where you can get fresh flower arrangements.

Anthony Madison started his business roughly 35 years ago, originally running it out of his home in Chalybeate.

“I actually ran it on my back porch, and I started out only selling silk flowers,” he said.

For a florist selling fresh flowers, a cooler to preserve the flowers is essential. At the time, Madison didn’t have the money for one.

Opening Madison’s Flowers in his Chalybeate home came nearly two decades after he was last involved with floristry, he said.

Madison got his start in the floristry business at 15 when Marguerite Moody, the owner of Marguerite’s Flowers, unexpectedly offered him a job.

“I actually went in one day to pay a flower bill for my dad and she asked me would I like to have a job,” he said.

At the time, Madison said he was mainly employed as a “gofer” but learned the basics of floral arrangement.

For 17 years, he worked at Holley Performance Products in Bowling Green but decided to change jobs when his daughter Autumn was born in 1981.

“My wife wanted to be a stay-at-home mom,” he said. “At first I actually mowed yards for extra money but then one day, I guess I had a brainstorm and thought, ‘Well I used to do flowers. I can still do that.’ ”

Despite initial fears that he wouldn’t be able to compete with the three existing flower shops in Brownsville, within two years Madison’s business grew too big for his porch to sustain, requiring him to move to a larger home in Brownsville where he ran the shop out of a two-car garage.

Moody died in 1990 and, a few years later, Madison bought her business and renamed his store Madison’s and Marguerite’s Flowers in her honor.

Trevor Madison, Anthony’s son, has traveled far and wide with the Peace Corps and has done farm work on homesteads in North Carolina and California but sometimes finds himself back in his hometown.

Typically, when he’s back in Brownsville, he works at his father’s store.

“I really am not rooted anywhere and I consistently find myself back in my hometown with my family,” he said.

Trevor, now 32, said he’s been working at Madison’s and Marguerite’s off and on since he was 18.

“I just grew up around it, and it became second nature to me when I started at it,” he said.

Growing up, Trevor would often go on flower deliveries and help out at the store, he said.

Tasked with building a mixed flower bouquet Wednesday, Trevor started with a rose in the center and expanded outward from there, scattering other flowers – such as carnations, goldrenrod and purple and yellow daisies – around the rose that stayed in the middle of the display.

“For me, the arrangement sort of makes itself,” he said. “The less I think about it, the better it’ll turn out.”

Anthony, after filling a separate vase with greenery, arranged a dozen roses and filled in with hypernicum berries and Alaskan aster.

“The basic designs I guess is based on geometrics,” he said. “You have kind of a starting point and then as you work, you go from A to B to C and then you fill in what you like, what looks good in that certain arrangement.”

In the decades his shop has been open, Anthony has relied very little on traditional advertising, he said, adding that word of mouth “helps more than anything else.”

When families come back to his store for more floral arrangements and bouquets for events like weddings and funerals, Anthony knows he’s doing a good job.