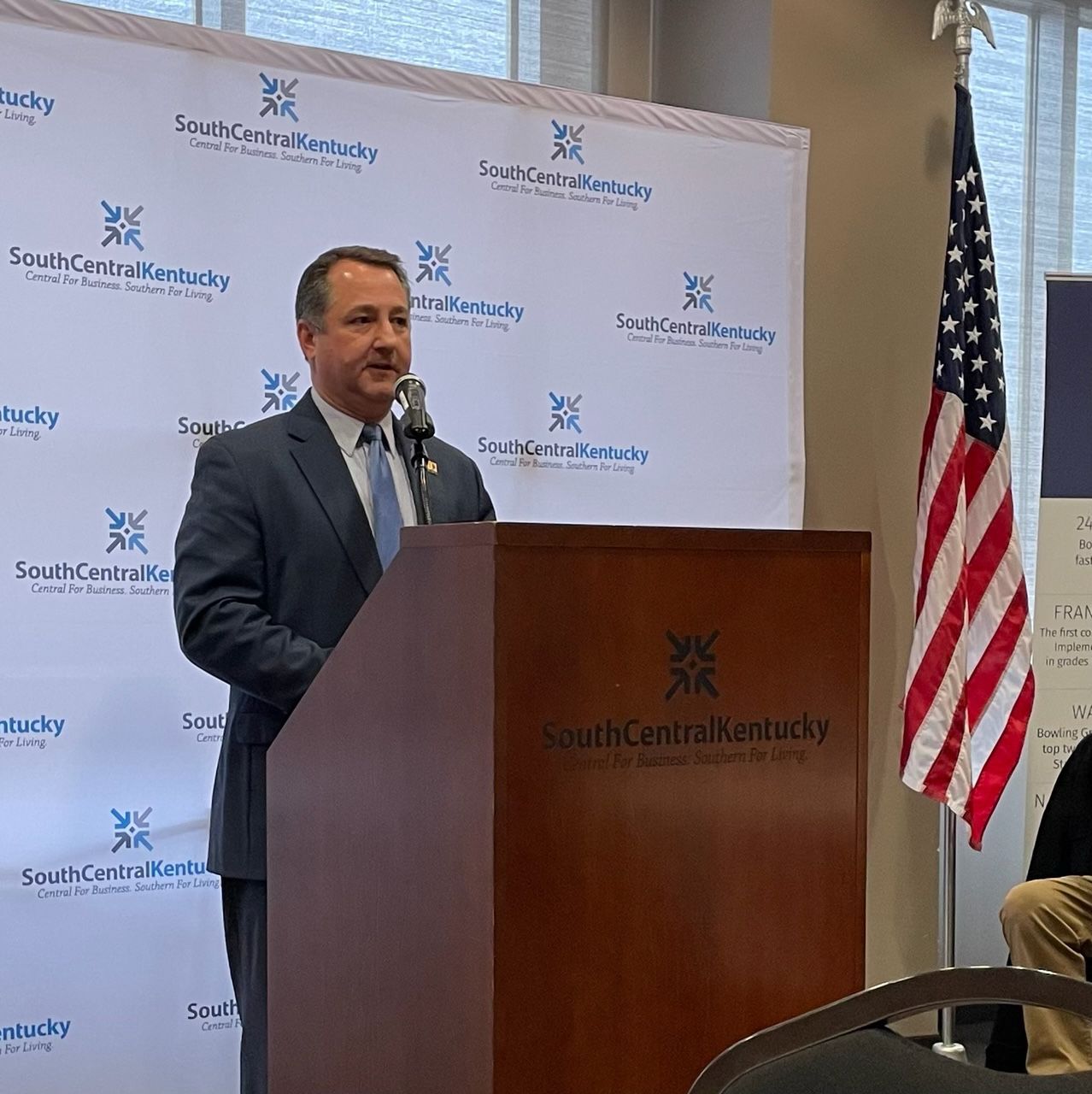 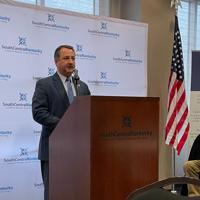 Ron Bunch, president and CEO of the Bowling Green Area Chamber of Commerce, speaks during Monday's announcement of a regional partnership to tackle the issue of workforce participation. 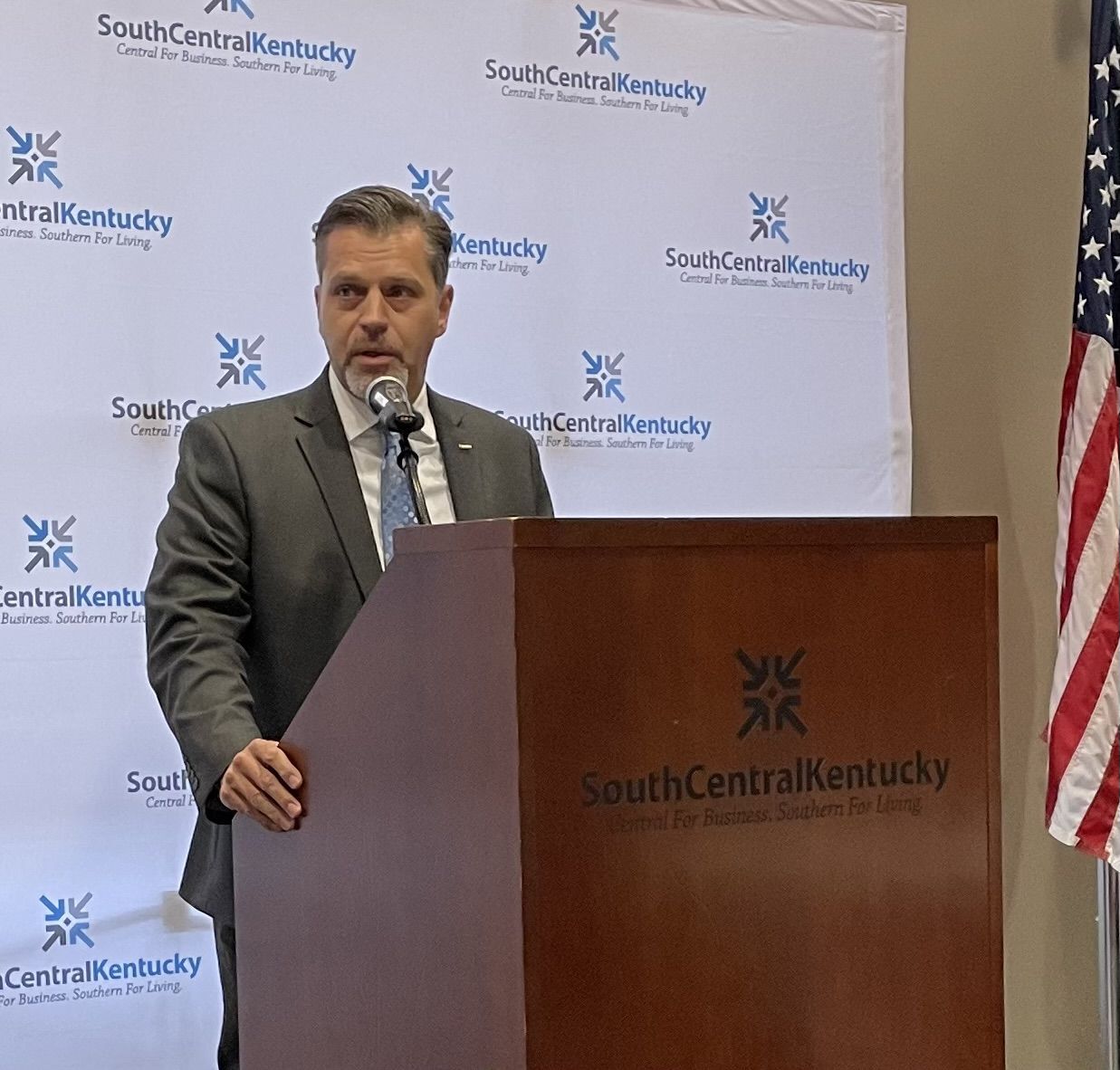 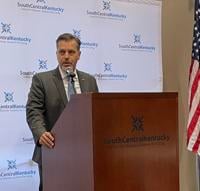 Jon Sowards, president of the Bowling Green-based South Central Workforce Development Board, said Monday there are "no silver bullets" that will solve the issue of workforce participation, but he said the workforce board is developing strategies to address what is a national issue. 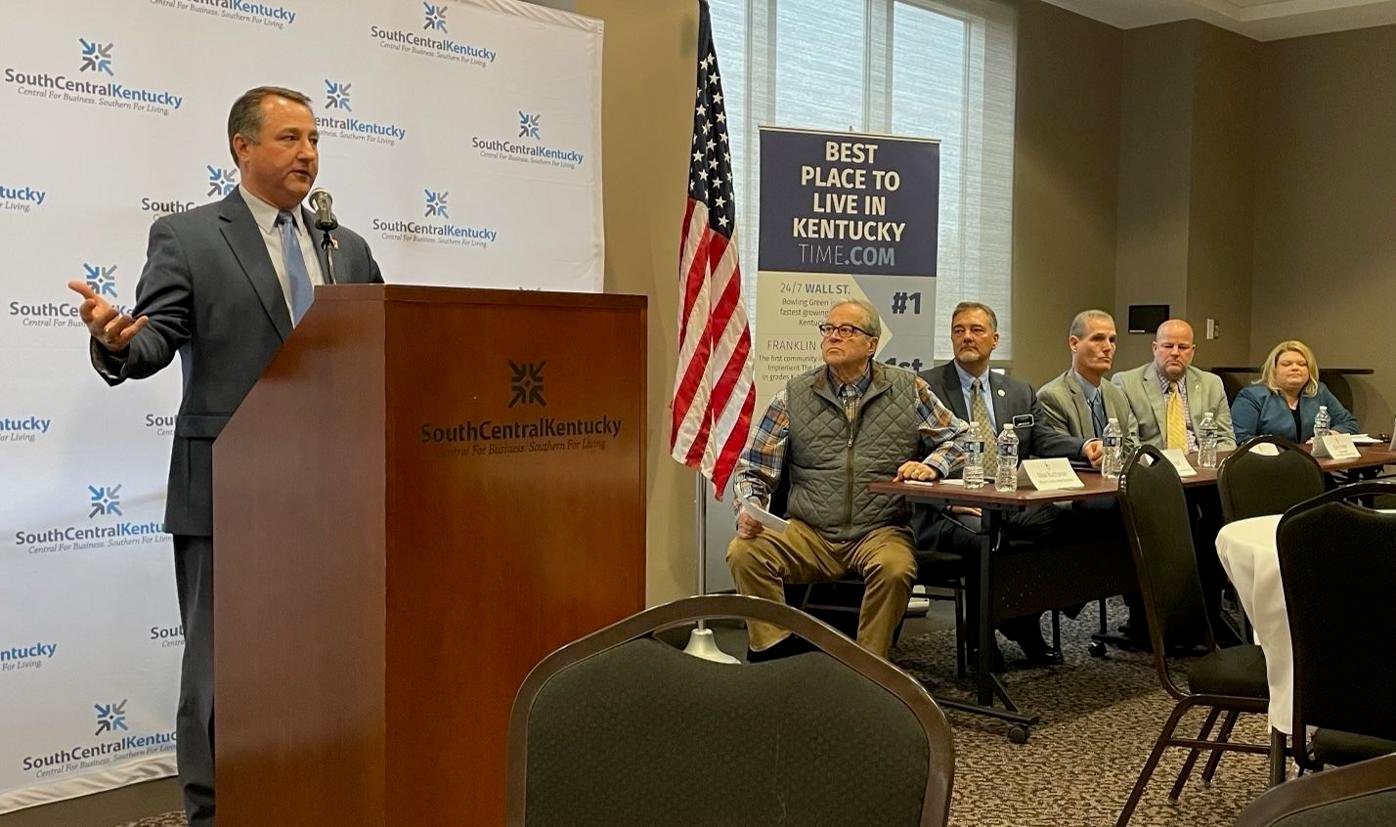 Ron Bunch, president and CEO of the Bowling Green Area Chamber of Commerce, speaks during Monday's announcement of a regional partnership to tackle the issue of workforce participation.

Jon Sowards, president of the Bowling Green-based South Central Workforce Development Board, said Monday there are "no silver bullets" that will solve the issue of workforce participation, but he said the workforce board is developing strategies to address what is a national issue.

Trying to tackle an outsized problem, local business and education leaders have come up with a super-sized plan.

Bringing together local government officials, educators, business leaders and workforce development professionals, the Bowling Green Area Chamber of Commerce on Monday kicked off a plan to bring all those stakeholders together to address what has become a national issue: a declining workforce participation rate.

“The chamber has been focusing on talent for at least a decade,” chamber President and CEO Ron Bunch said to open the meeting at the chamber’s headquarters on College Street. “We now find ourselves in a place where we have some great programs built.

“We want to come together collectively to address this issue. The problem is different from what we’ve encountered in the past. It’s going to take all of us to transform how we deal with it.”

Workforce participation has been declining for years, and that decline has only been heightened by the global coronavirus pandemic.

Defined as the percentage of working-age adults either working or looking for work, the national labor force participation rate has fallen from 67.3% in 2000 to 61.6% today.

The trend is more pronounced in Kentucky, where the participation rate has consistently trailed the national average and is now among the lowest in the nation at 56.3%.

Such statistics haven’t escaped the attention of South Central Workforce Development Board President Jon Sowards, who said the low number of people earning paychecks led to a change in the workforce board’s annual workforce summit this year.

Instead of one large gathering, the workforce board held a “town hall tour” that consisted of four meetings across the region that were focused on workforce participation.

“This problem is real,” Sowards said. “Everybody is hurting for labor right now.”

Sowards said there’s no single culprit and cited lack of child care and transportation, the loss of baby boomers in the workforce, the opioid crisis and changing attitudes toward work as factors contributing to the workforce participation decline.

“Myriad issues have intersected at one time,” Sowards said. “There are no silver bullets to fix the problem.”

Although he doesn’t claim to have a solution, Sowards said the workforce board has come up with what he called “three distinct lines of effort” to combat what the Kentucky Chamber Foundation has identified as a “workforce crisis.”

Through a campaign it’s calling “Respect Works,” the workforce board is attempting to inspire workforce participation.

“We want to mobilize community influencers to talk about the benefits associated with work,” Sowards said.

A second effort of the workforce board is designed to influence local workforce participation through what Sowards called “pathways and programs.”

“We want to review how we place in the workforce high school and college students and transitioning members of the military,” Sowards said. “Everybody has a hand in this.”

Finally, Sowards said the workforce board is focusing on recruiting employees from outside the region.

“Perhaps we can recruit Western Kentucky University graduates who have moved away,” he said. “We’re also focusing on our international community. A little bit of marketing can bring more of those folks back into the workforce.”

Sowards admits that he and his staff “don’t have all the answers,” but he wants the workforce board to take a leading role in solving a problem that he sees as a possible roadblock to further economic growth.

“We’re in the midst of an evolving economy,” he said. “If we can get the workforce participation rate up, we can continue to attract high-paying jobs.”

Bunch and Sowards seem to have the support of local educators and government leaders as they try to find solutions to the workforce issue.

“Workforce development is important if we’re going to continue to grow and make our economy the best in the nation,” Buchanon said.

Education leaders from K-12 through higher education are also on board, saying they’re looking at ways to better connect students with employers.

“We in education have to be willing to change,” said Phillip Neal, president of Southcentral Kentucky Community and Technical College. “We need to focus on careers more than on degrees.”

A chamber of commerce news release said the business and education partners involved in addressing workforce participation will meet monthly and develop strategies that will be implemented beginning in 2022.

You’ve seen it if you’ve waited in one of those long drive-through lines for your hamburger and fries.