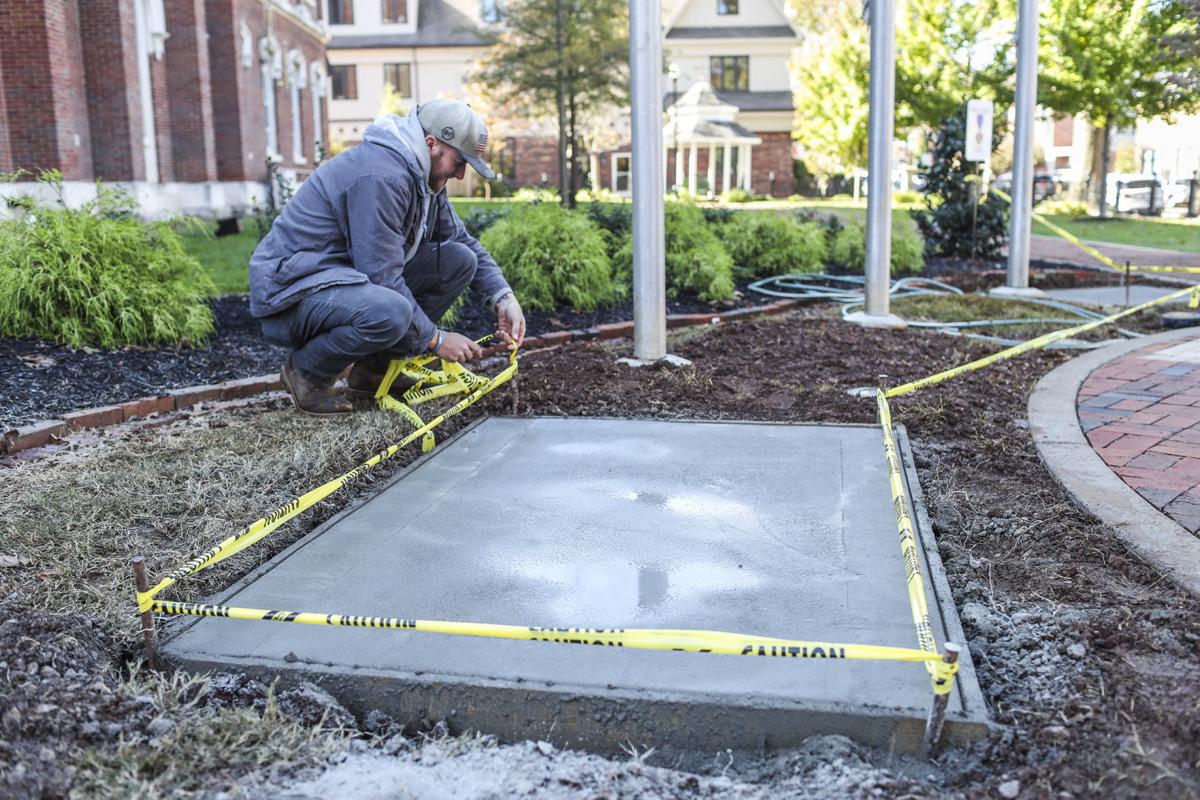 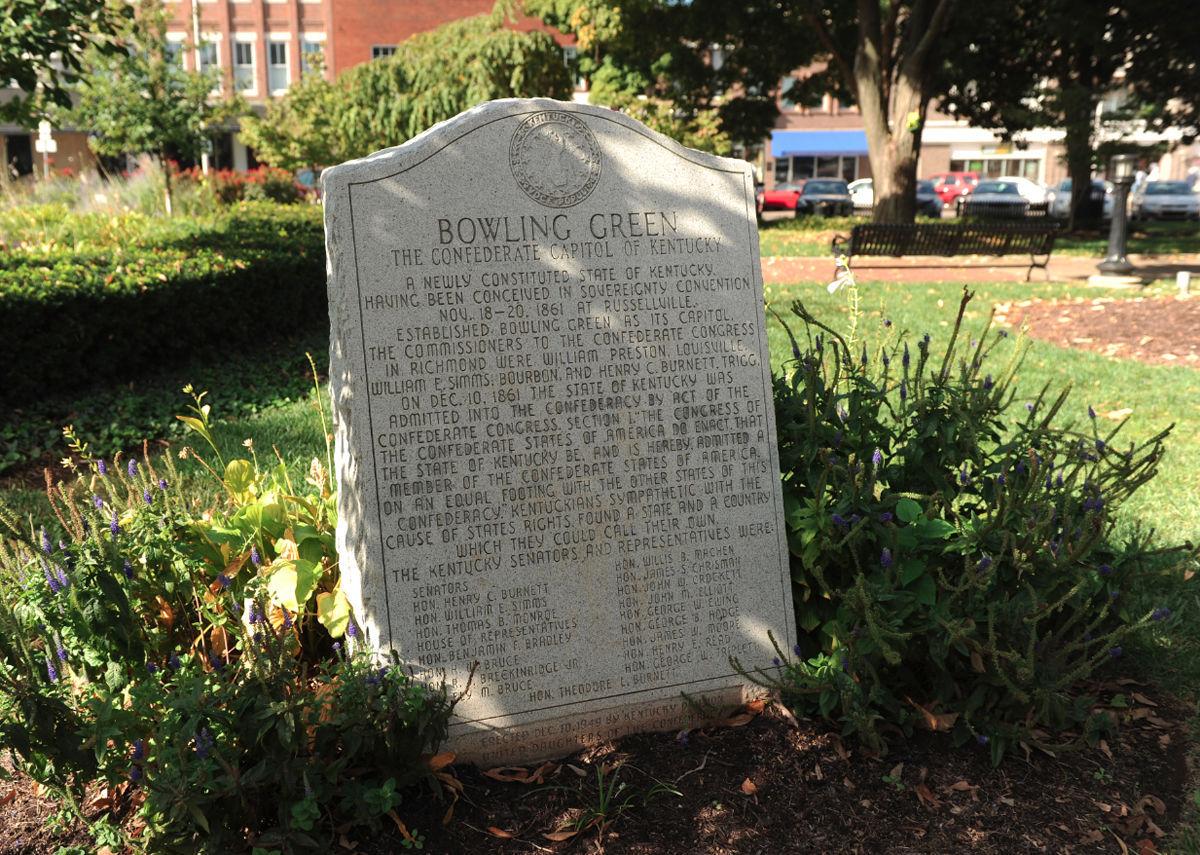 A marker commemorating Bowling Green’s status as the state capital of the Confederacy was placed in the downtown Fountain Square Park in 1949. Bowling Green Mayor Bruce Wilkerson told the Daily News on Tuesday that this marker, along with another one commemorating the Spanish-American War, will be moved from the park to the Veterans Memorial Courtyard at the nearby Warren County Courthouse.

A marker commemorating Bowling Green’s status as the state capital of the Confederacy was placed in the downtown Fountain Square Park in 1949. Bowling Green Mayor Bruce Wilkerson told the Daily News on Tuesday that this marker, along with another one commemorating the Spanish-American War, will be moved from the park to the Veterans Memorial Courtyard at the nearby Warren County Courthouse.

Two markers – one identifying Bowling Green as the state capital of the Confederacy and another memorializing the Spanish-American War – have been removed from Fountain Square Park and will be placed in the Veterans Memorial Courtyard between the Warren County Courthouse and Bowling Green City Hall.

Moving the markers is part of the overall ongoing renovation of Fountain Square Park, Bowling Green Mayor Bruce Wilkerson said in a written statement to the Daily News.

“There were several markers placed in the Square to commemorate different events, including previous park renovations, the identification of Bowling Green as the state (capital) of the Confederacy, and a memorial to the Spanish-American War,” Wilkerson’s statement reads. “The markers were usually indicating a date of a particular notable event.”

The Confederate marker is dated Dec. 10, 1949, which Wilkerson said would have marked the 88th anniversary of Kentucky’s admission into the Confederacy.

The other marker, dated June 6, 1938, commemorates the 40th anniversary of the Spanish-American War.

The removal or relocation of Confederate monuments has often been met with controversy throughout the south. The movement, removal or alteration of some military monuments in Kentucky must be approved by the Kentucky Military Heritage Commission, but that does not appear to be the case with either of the Fountain Square Park markers.

“There are no monuments in Warren County currently listed in the Kentucky Military Heritage Commission registry,” said Diane Comer, public information manager for the Kentucky Heritage Council, the state’s historic preservation office. “The commission does not have any role in what happens to those locally.”

Wilkerson’s statement says the city consulted with Warren County Fiscal Court and decided to place both markers in the Veteran’s Memorial Courtyard on the courthouse lawn.

“There is already a Kentucky Historical Society marker in the courtyard identifying the Medal of Honor awards and officers during the Civil War. This solution seems to be an appropriate place to tie in all of the information regarding the wars,” Wilkerson’s statement reads.

The decision was made without advance public notice and without votes by either the Bowling Green City Commission or Warren County Fiscal Court.

Warren County Judge-Executive Mike Buchanon said that after being approached by the city, he spoke individually with the county’s magistrates and with local veterans organizations, none of whom expressed disagreement with placing the monuments in the courtyard.

“I wasn’t in on the decision to move it,” Buchanon said. “Nor did I get a full explanation of why they decided to move it. When they were looking for another place, I felt they should be placed somewhere in the Veterans Memorial Courtyard. It is an appropriate place for those markers to reside.

“It’s history. It’s just stating facts. It’s not glorifying anyone. It’s a historical monument that tells the story of what happened. We’ve already got other Civil War markers over there. We’re planning on putting an additional plaque over there that talks about when the Union Army came and reoccupied Bowling Green.

“That marker was put there in 1949 and, to the best of my knowledge it’s never been offensive to anyone,” Buchanon said of the Civil War marker being moved. “It’s important to recognize our history, the good parts about it and the bad parts. If you don’t know all the mistakes you’ve made, you’re likely to make them again. History is something that should be learned from. I think it’s important to note the history we went through and the agony our country went through every time we have a war.”

Warren County Magistrate Doug Gorman also said he was made aware of the decision to move the markers.

“Fiscal court was aware of the city wanting to remove them from the park, and we offered to put those into the Veterans Memorial Courtyard. That was conversations that the judge had with each of the members of fiscal court, and to my knowledge no one objected to the placement of them,” he said.

In interviews with the Daily News, none of the city’s four commissioners voiced opposition to relocating the markers to the memorial courtyard, even though the matter has not been brought before the commission for a vote.

“I wouldn’t have a problem if it were to come up for a vote,” Commissioner Rick Williams said. “I would think that would be an appropriate spot to place a war memorial of any kind in the war memorial garden. If it needs to come before the commission for a vote, I will be happy to consider any thought processes that are part of the discussion.”

“I don’t believe that it has to come before the commission for a vote,” Nash said. “If it does, I would be happy to share my opinion about it. The park next to the county courthouse is designed to commemorate military personnel who have fought on behalf of the United States, and so it seems an appropriate place for both the monuments.”

Denning said that if the Veterans Memorial Courtyard had been established many decades ago, the monuments might have been placed there originally rather than in Fountain Square Park.

“I concur with the moving of the monuments over to where we already have an outside museum of war heroes, and I think this is an appropriate place,” he said.

Parrigin said having the markers in one place will make them easier for people to find.

“I think it’s a great move for those markers to put our war memorial kinds of remembrances ... in one very prominent location,” she said. “I’ve been to several events in that courtyard. It’s a really, really nice place, and I think it’s appropriate to have these kinds of (memorials) together instead of people wandering around the community trying to find them.”

Parrigin said city administrative staff asked the commissioners individually to weigh in on the issue.

“It’s not like the mayor just made this decision,” she said. “We were able to give input. This is a big project,” she said of the park renovations.

“There’s multiple things along the way that you have to consider and that was one of them. To cluster these types of historical markers together seems to make more sense to me as far as community access to them. Why not have it all together? It just made sense,” Parrigin said.

Night editor and senior writer Deborah Highland is a veteran journalist with 23 years of experience writing and editing both community and metropolitan newspapers. She has also developed websites and co-hosted a political talk show.