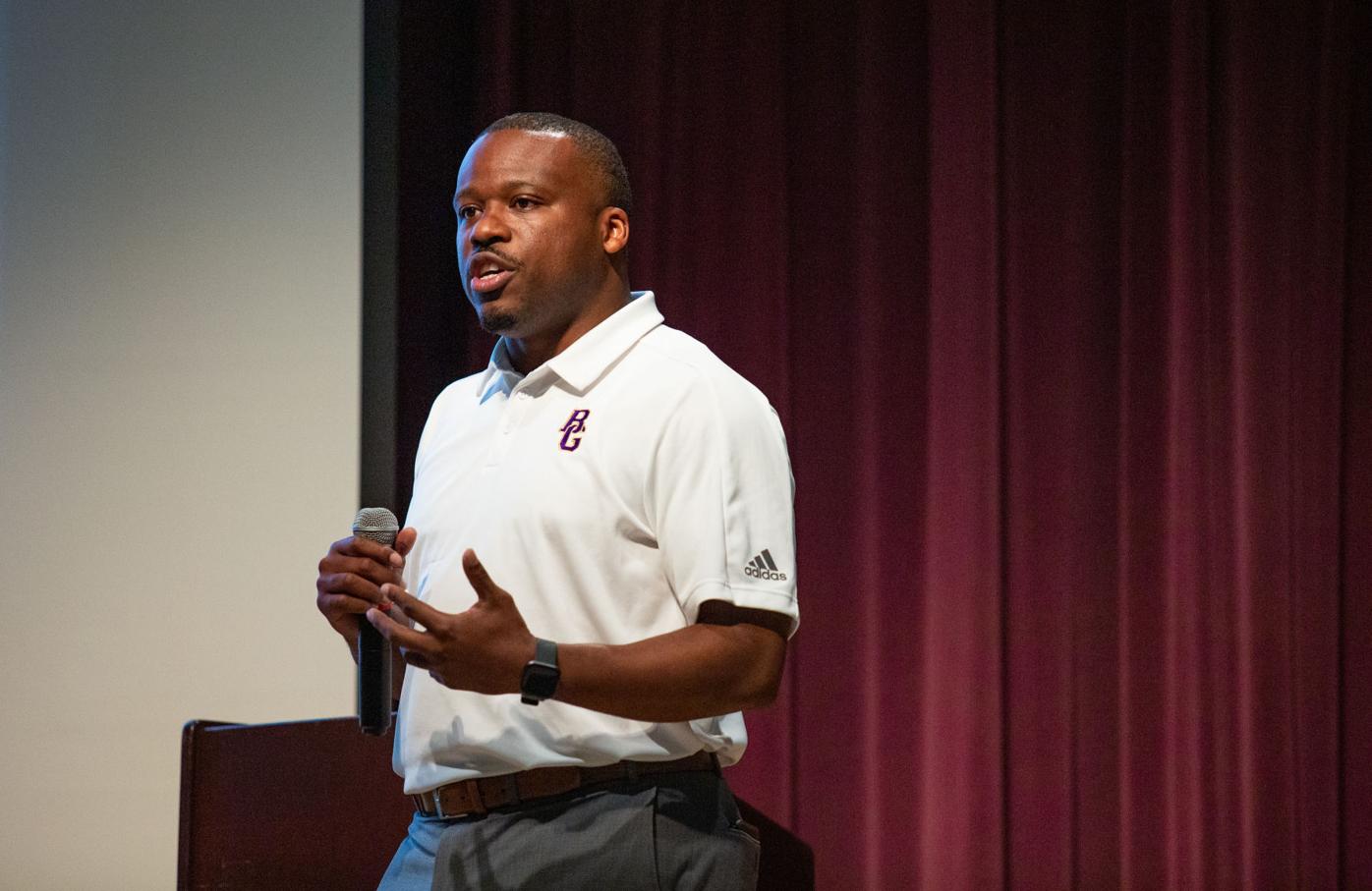 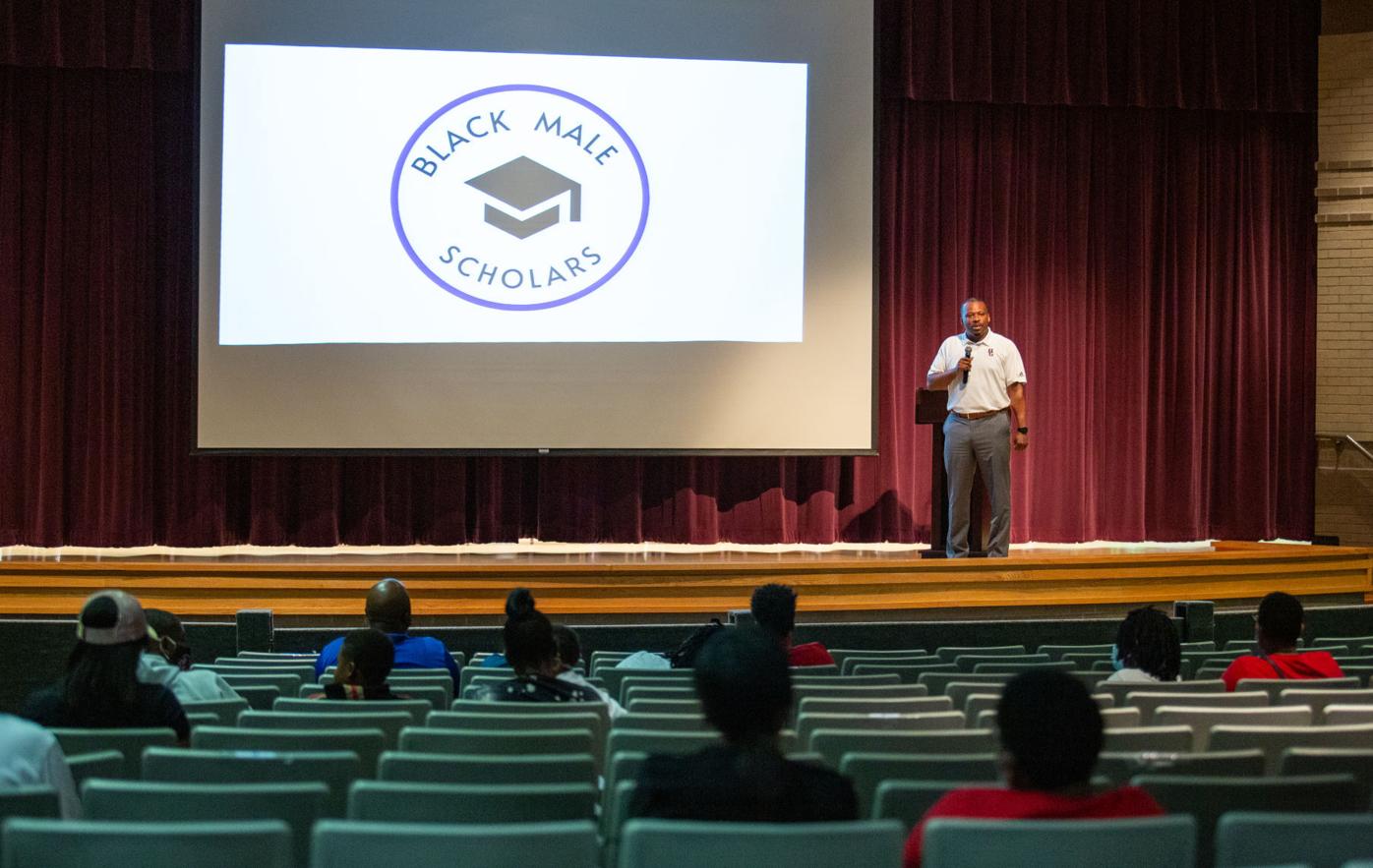 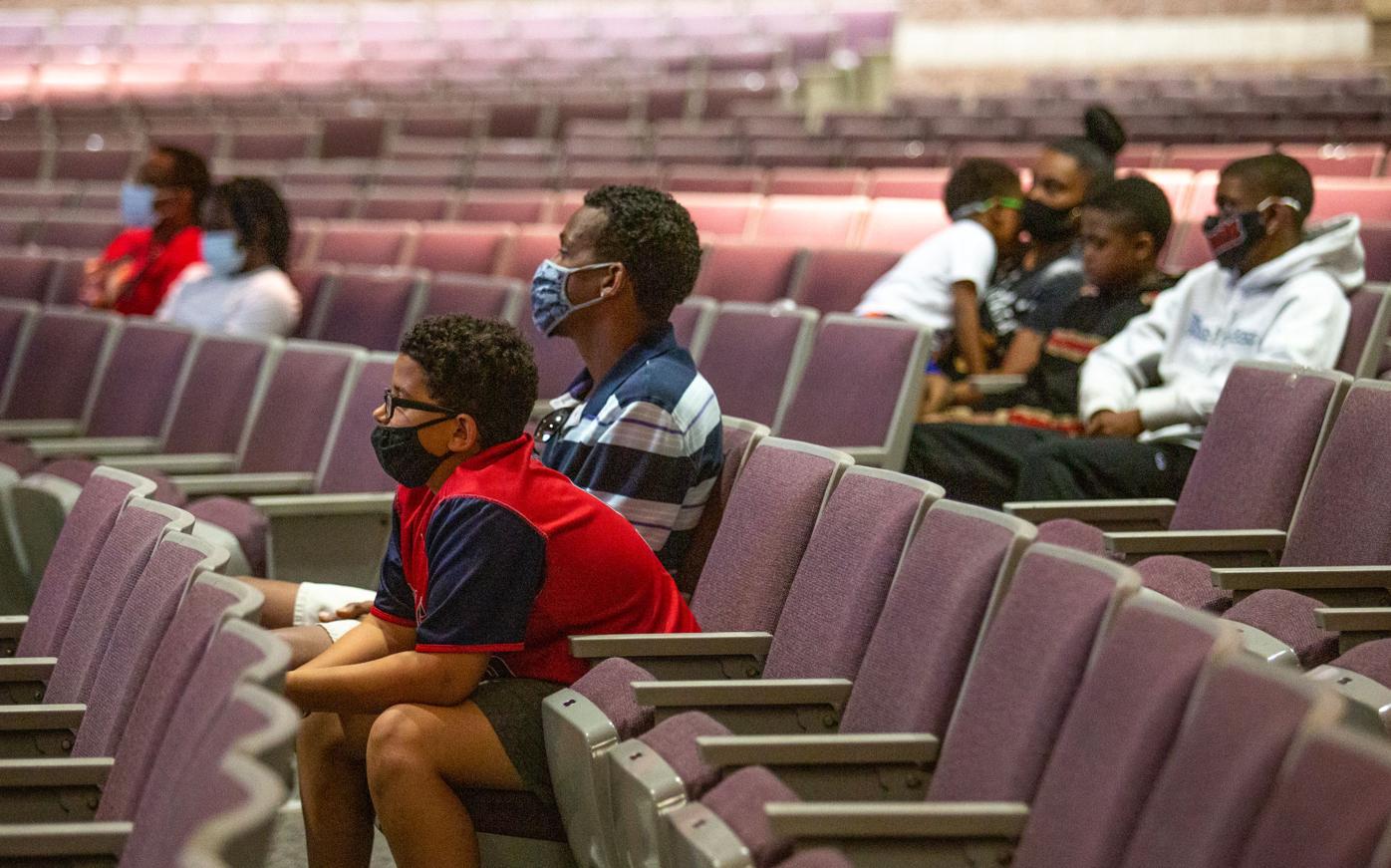 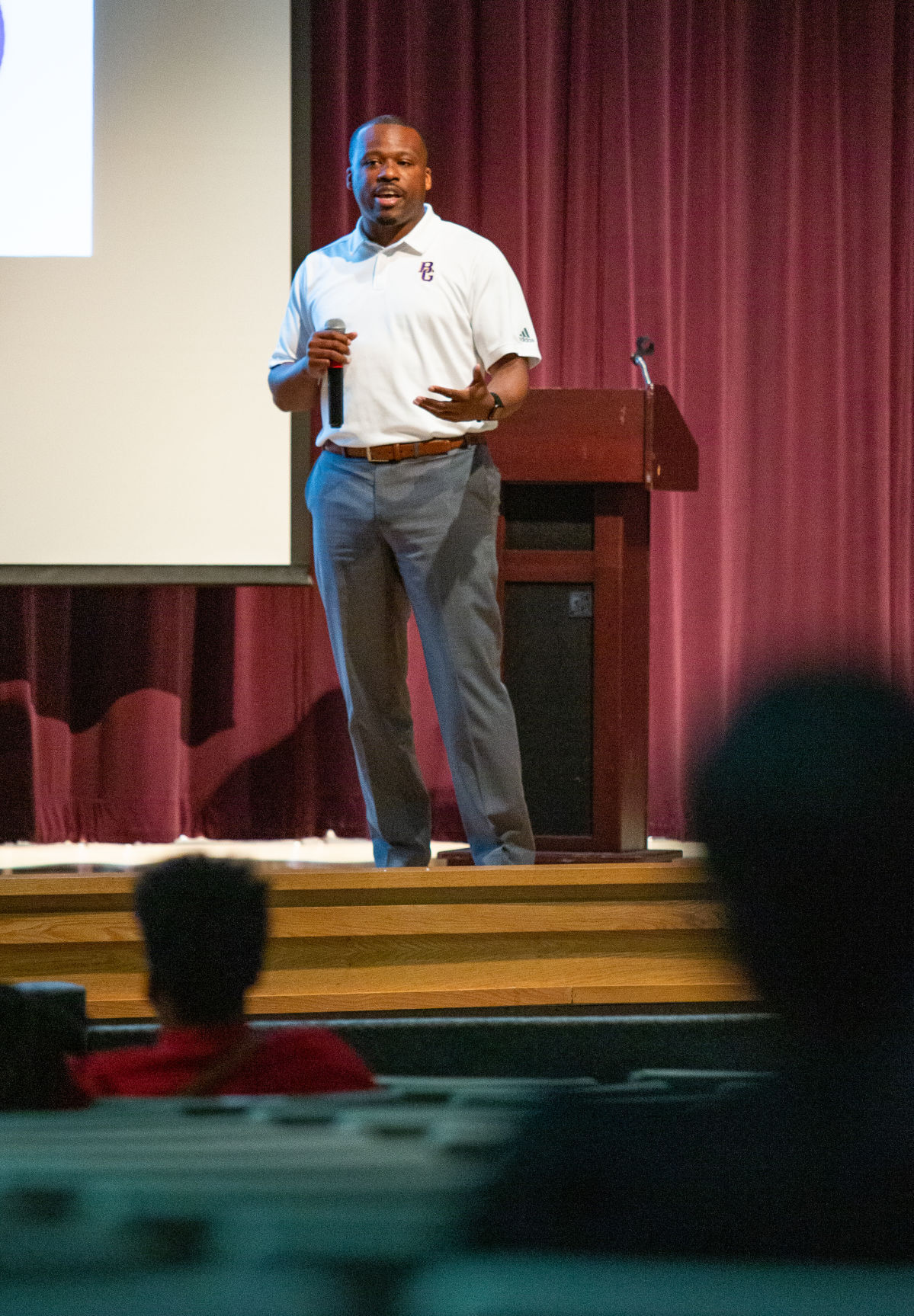 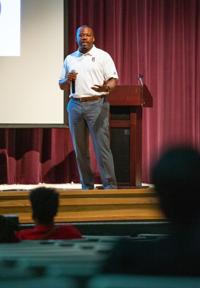 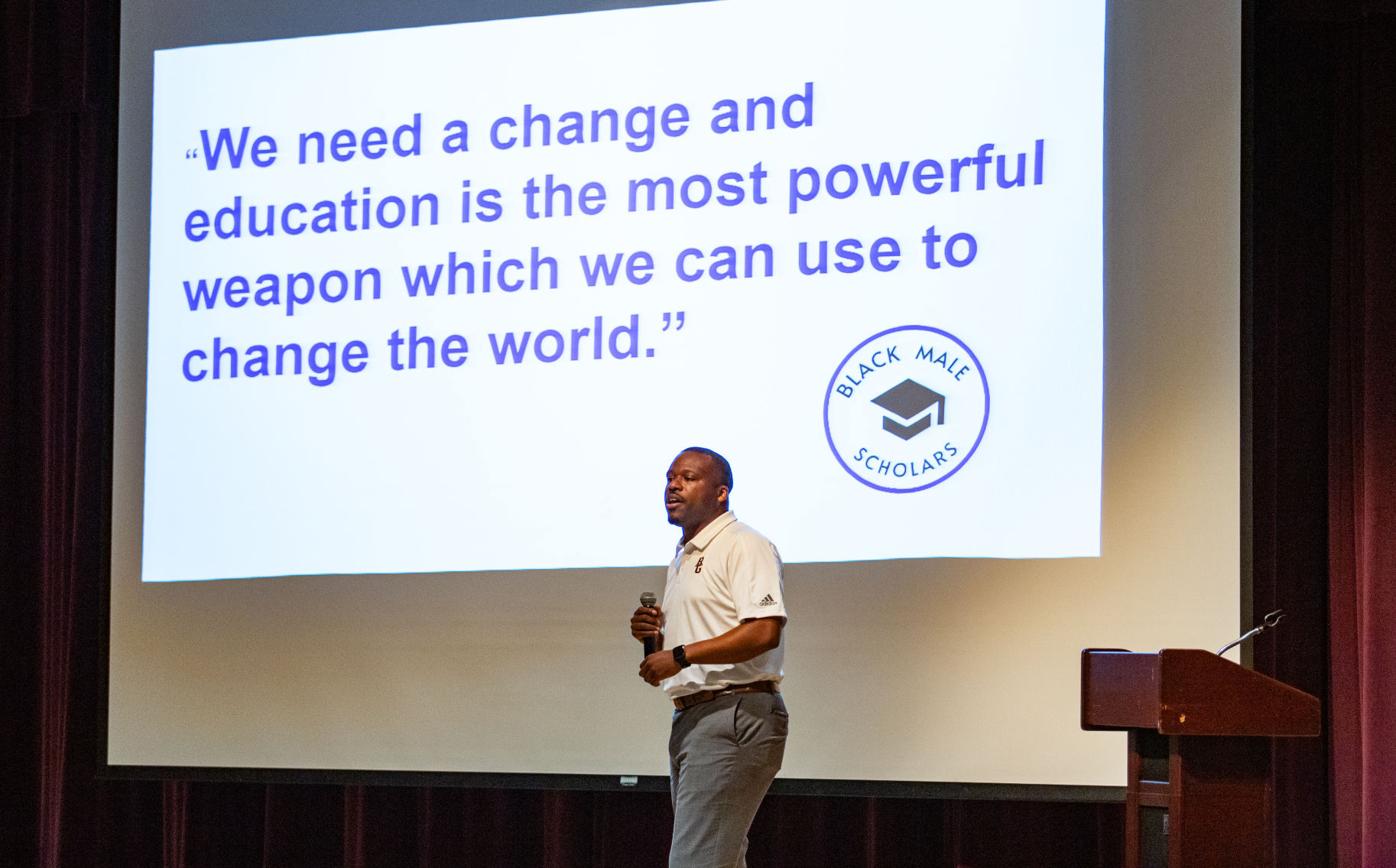 With room for up to 25 incoming sixth graders, the program will center on a curriculum and content taught through the lens of African American history and culture. Mentorship, college and career prep and off-site visits in the community will be part of the program.

“We want to make sure that our young men see people that look like them,” Bowling Green Junior High School Principal Robert Lightning said.

Applications for the program are due May 5, and the vetting process will involve obtaining a recommendation from someone who is not a family member and candidate interviews before a school committee. The student interviews will take place the week of May 10-14. A program orientation day will be in July.

Speaking to a handful of parents who attended the session Tuesday, Lightning said the program is a facet of the district’s broader efforts to improve educational equity.

District assessment data collected through the formative iReady reading and math assessments – used by teachers to help focus their efforts – shows that Black students have performed significantly behind White students and all students in the aggregate.

iReady is not a “high-stakes” test, and the results are not factored into students’ grades. Typically administered three times during the school year, it merely offers a snapshot of a child’s performance.

For example, when the iReady reading assessment was administered in the fall of 2020 – the most recent results Lightning presented – Black students performed about 43 percentage points behind their White peers. A similar pattern played out on the iReady math assessment for 2020, with Black students roughly 32 percentage points behind White students.

According to the assessment data, Black male students underperformed even compared to all Black students as a whole.

“We know we have to make a change,” Lightning said.

He said Black boys often lack a strong sense of self, positive education experiences, experience stereotypes and low expectations in the classroom – problems the Black Male Scholars program wants to address. By having the group of students take four core content classes together, the idea is to “build a brotherhood,” Lightning said. School staff will also be trained in how to meet the unique challenges Black boys face, he said.

The information session drew several interested Black parents, who quizzed Lightning on whether Black men would be teaching the classes, how many Black professionals work in the school building, whether ongoing funding would be an obstacle to maintaining the program and how athletic opportunities might be affected.

Lightning acknowledged that no Black men are teaching the classes – at least not in the initial year.

Lightning said the district is continuing to work toward diversifying its teacher workforce, including by partnering with Western Kentucky University’s teacher college.

A steady revenue stream will also not be a problem, Lightning vowed. In fact, the school wants to at some point expand the program into the seventh and eighth grades, he said.

Additionally, Lightning said participating students will have the same athletic opportunities as any other BGJHS student.

Theo Marks, whose son is a rising sixth grade student, said his family has a history of working with youth at risk of slipping through the cracks.

“A lot of these kids that are going into the sixth grade … they’re already like family to us,” he said, adding he wanted to ensure the program would adequately support those students.

Asked if he was satisfied with the district’s approach to equity, Marks said this is a great start.

“Of course I would like to see Black males actually teaching in the Black Male Scholars program, but like Mr. Lightning said, they’re working toward that and the (teachers) have been trained to work with these young men,” he said. “Of course I think a lot of the parents would like to see our Black males being taught by Black males and Black females, but if a teacher is properly trained and educated and loves the child and cares for the child, then so be it. You couldn’t ask for anything better, but I am hoping that eventually the Black Male Scholars program is run and taught by actual Black males. I think that’s important for (students) to see that.”

Hoping to narrow educational gaps between its White and Black students, the Bowling Green Independent School District will launch its Black Ma…