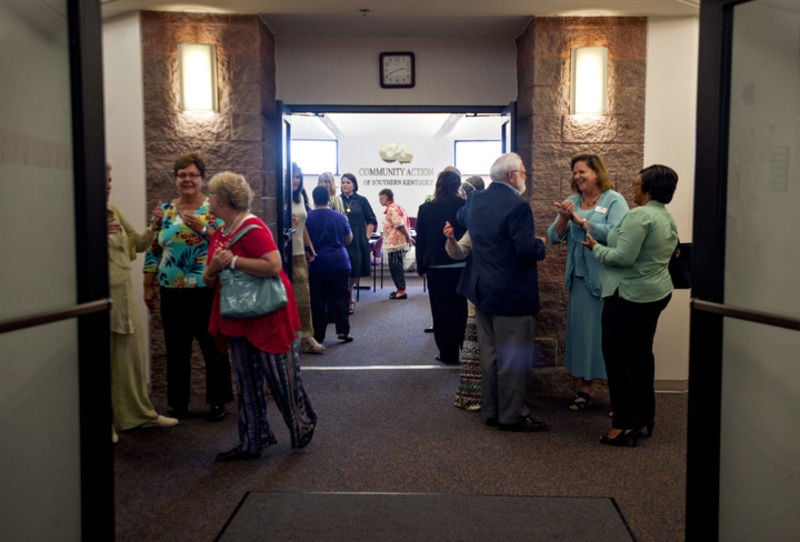 Miranda Pederson/photo@bgdailynews.com People gather at Community Action of Southern Kentucky on Thursday for the celebration of its 50th anniversary. 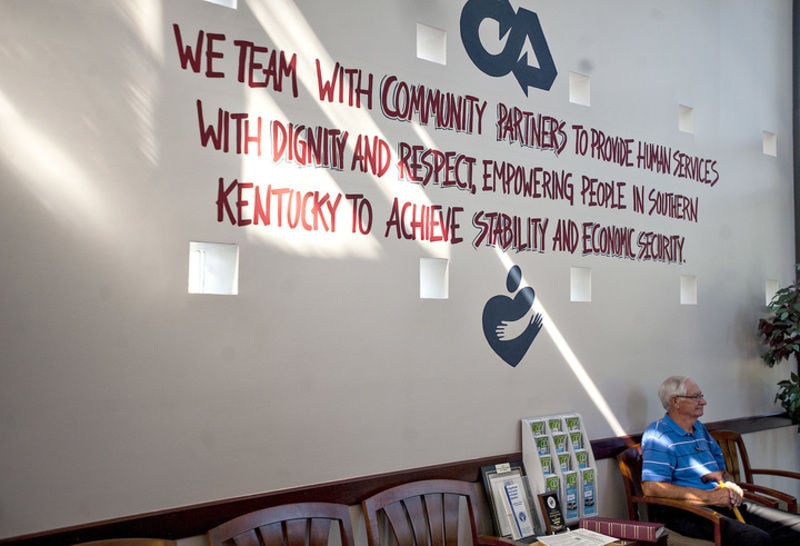 Miranda Pederson/photo@bgdailynews.com Jim Goodman of Bee Spring sits under the new mission statement on the wall Thursday during the Community Action of Southern Kentucky 50th anniversary for the celebration.

Miranda Pederson/photo@bgdailynews.com People gather at Community Action of Southern Kentucky on Thursday for the celebration of its 50th anniversary.

Miranda Pederson/photo@bgdailynews.com Jim Goodman of Bee Spring sits under the new mission statement on the wall Thursday during the Community Action of Southern Kentucky 50th anniversary for the celebration.

Community Action of Southern Kentucky held a celebration of its 50th anniversary Thursday. Prominently painted on the wall of the organization’s office lobby in bright red letters was its new mission statement, adopted on July 9: “We team with community partners to provide human services with dignity and respect, empowering people in Southern Kentucky to achieve stability and economic security.”

The federal Economic Opportunity Act of 1964 established Community Action, which provides funding for nonprofits aimed at alleviating poverty, according to Charity Parrish, CASOKY director of planning, program development and communications. CASOKY was founded the following year, she said.

Logan Chick, Logan County judge-executive and chairman of the CASOKY board of directors, likes the new motto because it effectively sums up what CASOKY aims to do.

“Our core programs are centered around that mission statement,” he said.

CASOKY has been effective in Logan County, according to Chick. Due to the recession, the nonprofit has not been able to offer as much as it could in the past. “We had to cut back on some programs because the economy cut back on us,” he said. Since 2007, the nonprofit has been on an upward swing but, despite a recent increase in private grants, still hasn’t caught up with what it could offer in 2007, according to Chick.

The nonprofit is still looking to expand its services, he said. A new program approved Thursday, the New Day Housing Program, is designed to help homeless women with children and families with transitional housing, he said.

“It seemed to me like it would be a great idea for people who can’t get housing,” Chick said.

CASOKY serves 10 counties in the Barren River area, associate director Tracy Haddix said. “It’s just a real public presence we have in every county” within that area, she said.

The nonprofit’s Head Start program alone has had a massive effect on the area, she said.

Head Start provides services, including education, meals and health services for children ages 3 and 4. Haddix said CASOKY serves roughly 700 children a year through Head Start. “Multiply that by 50 (years), there’s no telling how many lives we’ve touched,” she said.

CASOKY also includes programs that aren’t aimed at children, including GO bg Transit, she said. “We serve the whole gamut from infants all the way up to seniors,” Haddix said.

With its new motto in mind, the nonprofit is looking to expand its services, she said.

The organization is currently looking at an expansion of the Head Start program that would provide low-income housing for homeless families, Haddix said.

— For more information go to http://casoky.org.