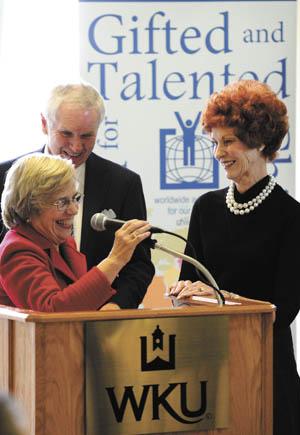 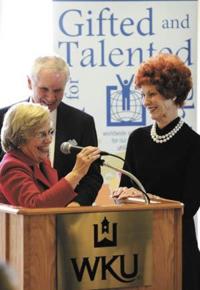 Julia Link Roberts (from left), executive director of the Western Kentucky University Center for Gifted Studies and the Carol Martin Gatton Academy of Mathematics and Science, speaks Tuesday to Pete and Dixie Mahurin of Bowling Green. 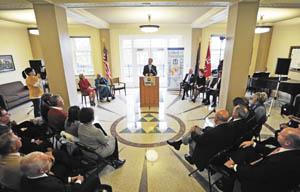 Western Kentucky University President Gary Ransdell (center) speaks Tuesday during a ceremony announcing that the World Council for Gifted and Talented Children is relocating its international headquarters from the University of Winnipeg in Canada to WKU.

Julia Link Roberts (from left), executive director of the Western Kentucky University Center for Gifted Studies and the Carol Martin Gatton Academy of Mathematics and Science, speaks Tuesday to Pete and Dixie Mahurin of Bowling Green.

Western Kentucky University President Gary Ransdell (center) speaks Tuesday during a ceremony announcing that the World Council for Gifted and Talented Children is relocating its international headquarters from the University of Winnipeg in Canada to WKU.

The World Council for Gifted and Talented Children is relocating its international headquarters from the University of Winnipeg in Canada to the campus of Western Kentucky University.

The WCGTC offices will be housed at the WKU Center for Gifted Studies in the new Gary A. Ransdell College of Education and Behavioral Sciences Building, set to open in January, WKU announced Tuesday.

“When we have the opportunity to seize the world stage in a priority discipline we pursue it, and we pursue it with passion,” said WKU President Gary Ransdell in announcing the move. “Gifted studies, from our own Center for Gifted Studies to the Gatton Academy for Math and Science in Kentucky to our premier Honors College, is our high priority for WKU.

“The announcement today takes this program to a new level on the international stage,” Ransdell said, adding that the move was made possible through a gift from Dixie and Pete Mahurin of Bowling Green, who in 2003 endowed a professorship held by professor Julia Link Roberts, executive director of the CGS.

The Mahurin Professor of Gifted Studies is one of the few endowed chairs in gifted studies in the nation. The Mahurins also have established the Sarah Joanna Mahurin Athletic Scholarship. The Mahurin gift is $750,000 over five years, the length of the university’s agreement with WCGTC to house the program.

Founded in London in 1975, the council advocates for gifted and talented children and works to bring attention to their potential to benefit society.

In addition to holding a biennial conference that facilitates worldwide communication of information, ideas and experiences, the council publishes the journal Gifted and Talented International and a newsletter, World Gifted. Roberts is one of seven members of the council’s executive committee, some of whom were present at Tuesday’s announcement.

The relocation kicks off the 30th year of the CGS. Almost 28,000 young people from all 50 states and 33 countries have attended the CGS’s summer and Saturday programs. The center also houses the Kentucky Association for Gifted Education and offers a number of educational services for gifted and talented students, their parents and professional development for educators, bringing thousands to WKU each year.

Roberts has been recognized as one of the most influential people in gifted education. She is also executive director of the Carol Martin Gatton Academy of Mathematics and Science in Kentucky.

The Mahurins are both WKU alumni and are involved in community service in Bowling Green.

Pete Mahurin is the board chair of HL Financial Services, LLC, the parent organization of Hilliard Lyons Trust Co. and Hilliard Lyons brokerage firm. He is a board member of Houchens Industries, Gray Construction, First & Farmers National Bank, FNB Bank and the Cecilian Bank. He has served on the CGS board of advisers since its inception in February 2001. He is also on the WKU Finance Advisory Council, the Campaign Cabinet and WKU’s Board of Advisors.

Dixie Mahurin has been involved with WKU’s student-athletes for more than 25 years. She is the coordinator of athletic-academic support and works directly with both the men’s and women’s basketball programs.

He added that nurturing the talent of gifted individuals benefits a region in many ways, pointing to areas with strong education programs, such as the Silicon Valley in California and Research Triangle in North Carolina.

“Those who have gone through the different (CGS) camps we have here at Western are going to make a difference,” said Sam Evans, education college dean. “And those who are a part of the Gatton Academy have a wealth of gifts to share with others. Bringing the World Council to WKU is going to give us the leverage to move to the next level.”