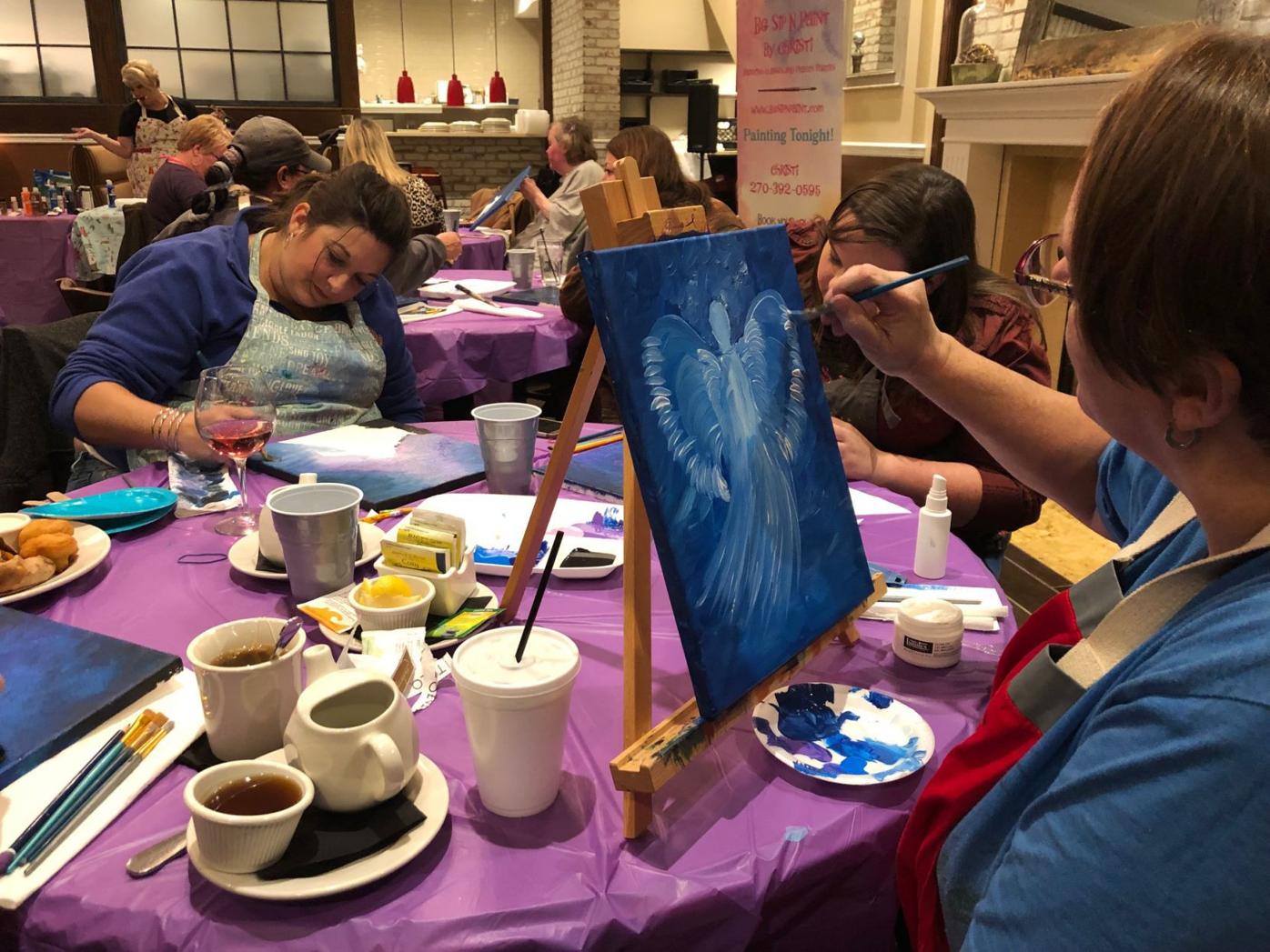 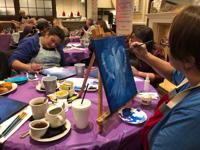 Mary Beth Lamb (foreground) works on her painting of an angel as Ashley Riddle (opposite Lamb) and Kaleigh Vertrees work on their own creations during a recent BG Sip N Paint class at Mariah’s restaurant. 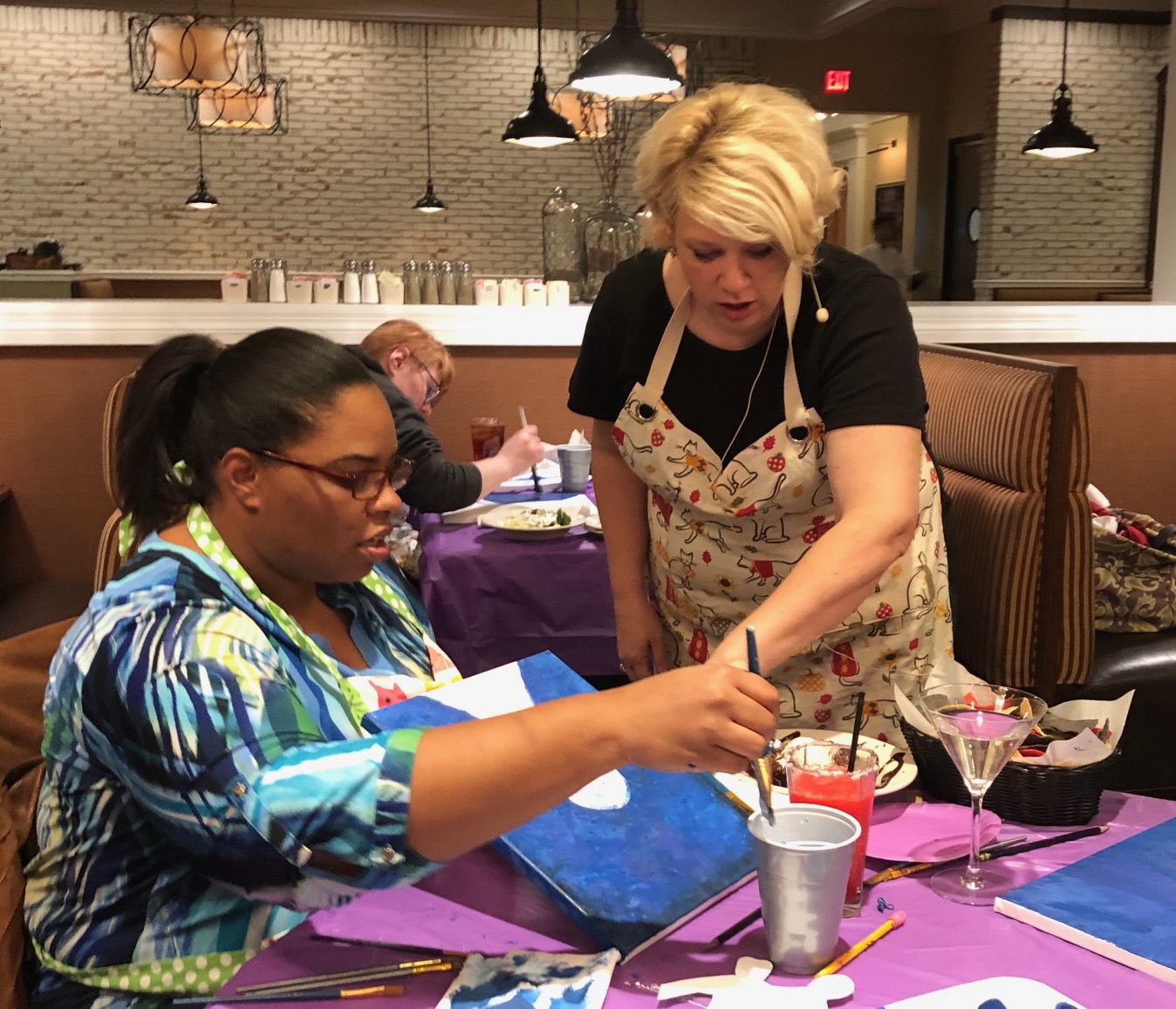 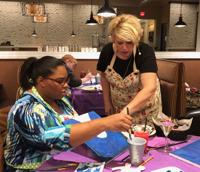 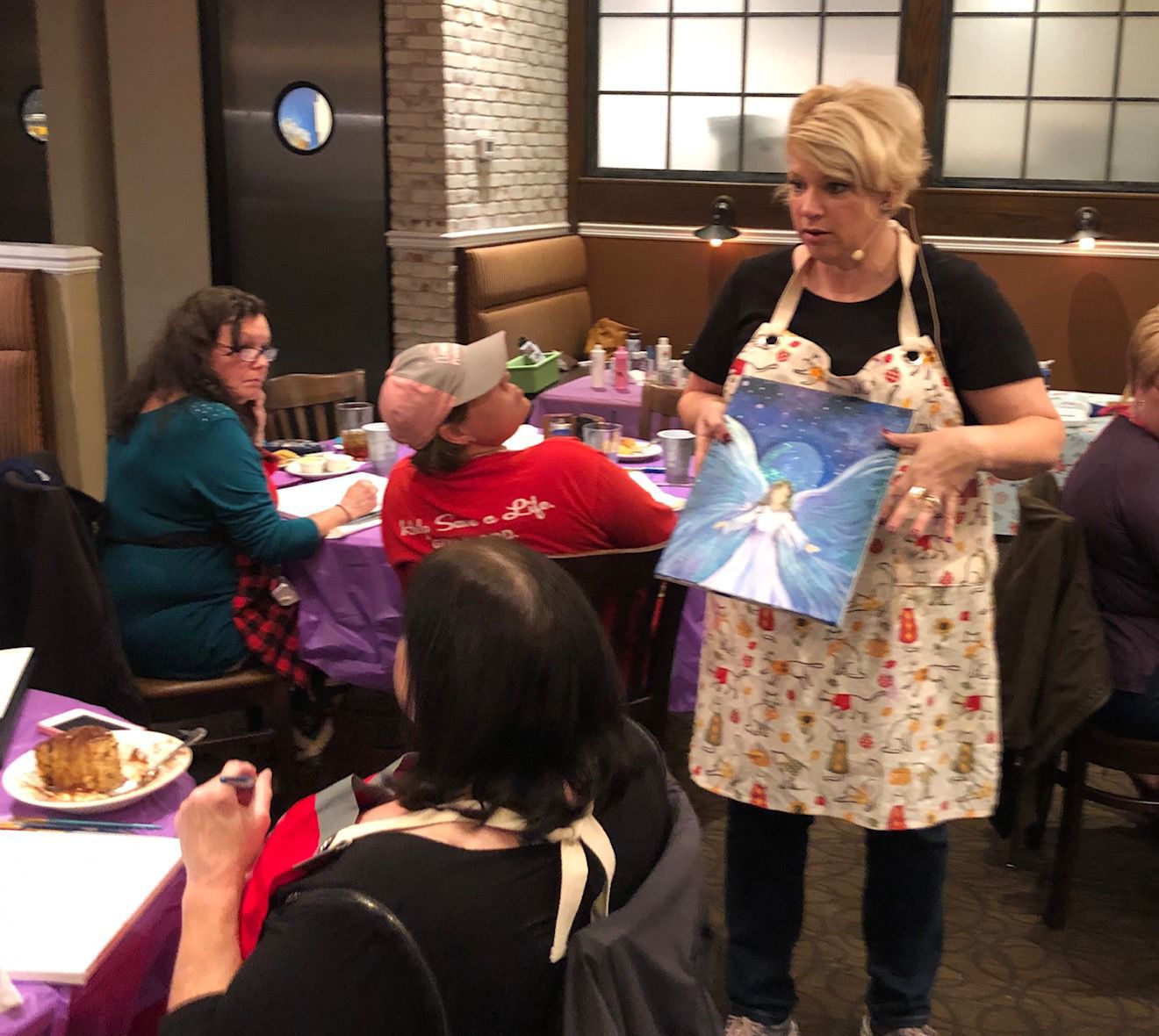 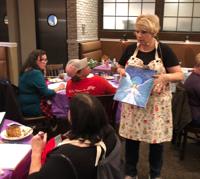 Mary Beth Lamb (foreground) works on her painting of an angel as Ashley Riddle (opposite Lamb) and Kaleigh Vertrees work on their own creations during a recent BG Sip N Paint class at Mariah’s restaurant.

Ignoring the temptation of a large chocolate brownie at her table, Lacretia Pratt wields a paintbrush and slowly makes a painting of an angel take shape. Seated nearby, her sister Jacinta Tarrence works on her own version of the same painting as a waitress hustles past with a basket of chips and salsa.

It’s a rainy, nasty November evening, but the 21 women who have showed up at Mariah’s restaurant are in a festive mood for an event that is equal parts social gathering and art class.

Christi Hull, wearing a microphone headset to be heard over the clinking of silverware and wine glasses and the steady hum of voices, is the evening’s rock star. The founder of BG Sip N Paint – a 1-year-old Bowling Green business – circulates among the women, teaching, encouraging and maybe marveling at what has grown from the simple idea of holding a painting class as a fundraiser for a nonprofit.

“I started out doing a fundraiser for the Alzheimer’s Association at Mellow Mushroom,” Hull said. “The manager said, ‘If you ever want to do another one, let me know.’ We invited the general public on social media, and the second fundraiser filled up.

“Then someone said, ‘If you had more of these, I’d come.’ It snowballed from there.”

The comment prompted Hull to become an entrepreneur and launch BG Sip N Paint, charging customers $25 to $35 (depending on the artwork) to sit down at a restaurant and munch on food, while brushing acrylic paint on canvas under Hull’s direction.

Since that beginning, Hull said she has done more than 50 such events, and they have grown to where she routinely attracts 30 to 40 customers.

“It was just a crazy idea, but it worked,” she said.

Evidence that it has worked can be found in repeat customers like Pratt, whose painting of a waterfall from an earlier class hangs in her house.

“I love that I can be an artist,” Pratt said as she worked on the angel painting. “I have no artistic abilities, but I came up with a masterpiece. I definitely want to do it more times. I love being able to hang out with friends and my sister. We’re able to relax and have a girls’ night to do something fun.”

Hull, whose work background is in the medical and business fields, said she always had an interest in painting and took art classes while an undergraduate at Old Dominion University.

Now Hull is inspiring others, simplifying the painting process and helping nonartists create something worthy of being displayed.

“I do everything step by step,” Hull said. “I explain the different brushes, and I try to make it fun and entertaining. A lot of people are surprised. They say, ‘I can’t believe this is something I painted.’ They all do the same painting together.”

Hull still does some fundraisers for nonprofits such as the Alzheimer’s Association and the American Cancer Society, but most of her classes now are for-profit events that are attracting a number of loyal customers.

“I’m overjoyed when they keep coming back,” said Hull, who estimates that she puts in a full eight-hour day preparing the paint and brushes for one of her classes.

The effort is worth it for regular customer Dana Adams, who believes she’s attended more than 30 of Hull’s classes.

A flagger for Scotty’s Contracting, Adams welcomes the relaxation of an evening in front of a canvas.

“I have a job that can be dangerous and stressful,” she said, “so I look forward to these classes. I have a good time meeting new people.”

Adams came to her first class reluctantly and says now: “I had never picked up a paintbrush before last year. A friend of mine was going to one of Christi’s classes, so I went with her. I was extremely nervous, and I was afraid it was going to be awful. But she teaches you step by step, and it turned out very well.”

Hull even attracts experienced artists to her classes.

Mary Beth Lamb, who brought her own easel to Mariah’s and often paints at home, has attended a number of Hull’s classes.

She was putting a different twist on the angel painting as she said: “The wonderful thing about coming here is we’re all painting the same picture, but everybody’s own picture turns out in a unique way.”

The loyalty of customers like Adams and Lamb has allowed BG Sip N Paint to grow to a point that has Hull mulling what the future might hold for her business.

“I would love to have a storefront,” she said. “But there’s so much involved. I like the flexibility I have, and I love the volume and the class sizes. I can’t imagine getting much bigger.”