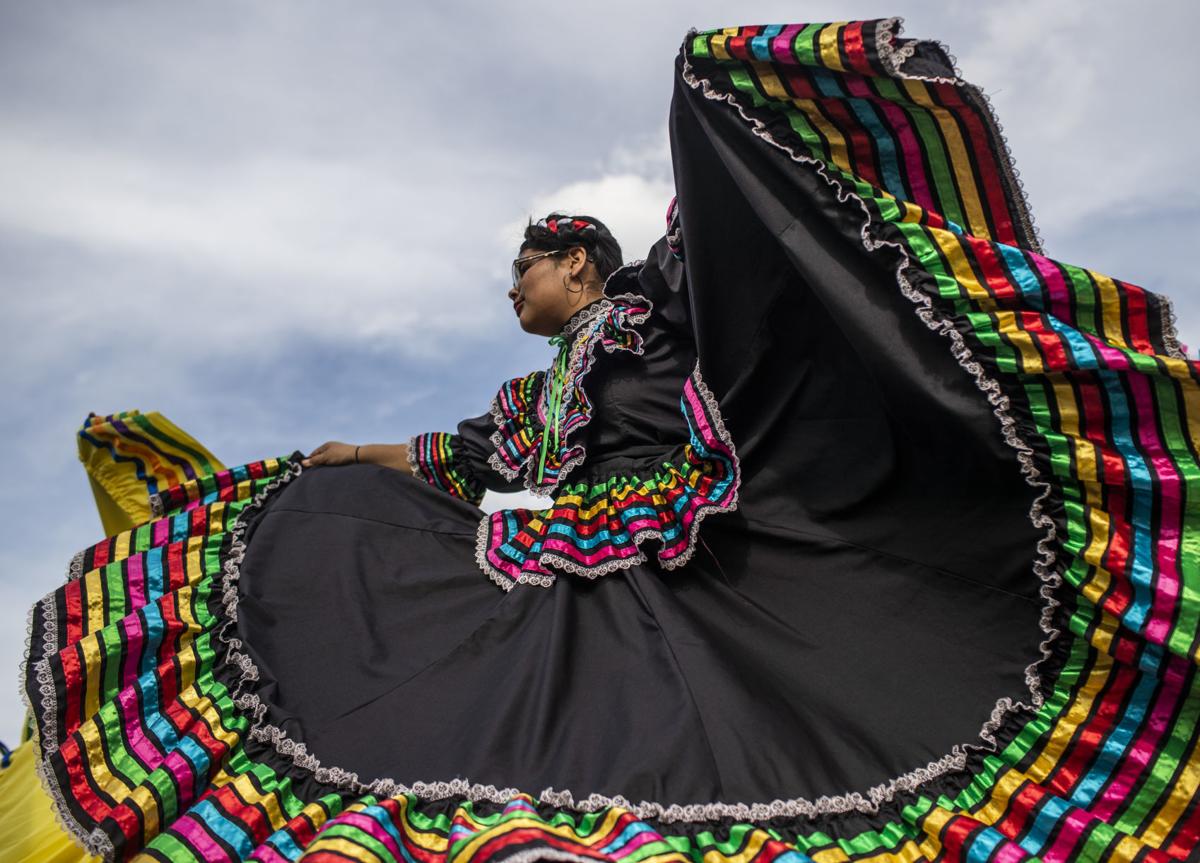 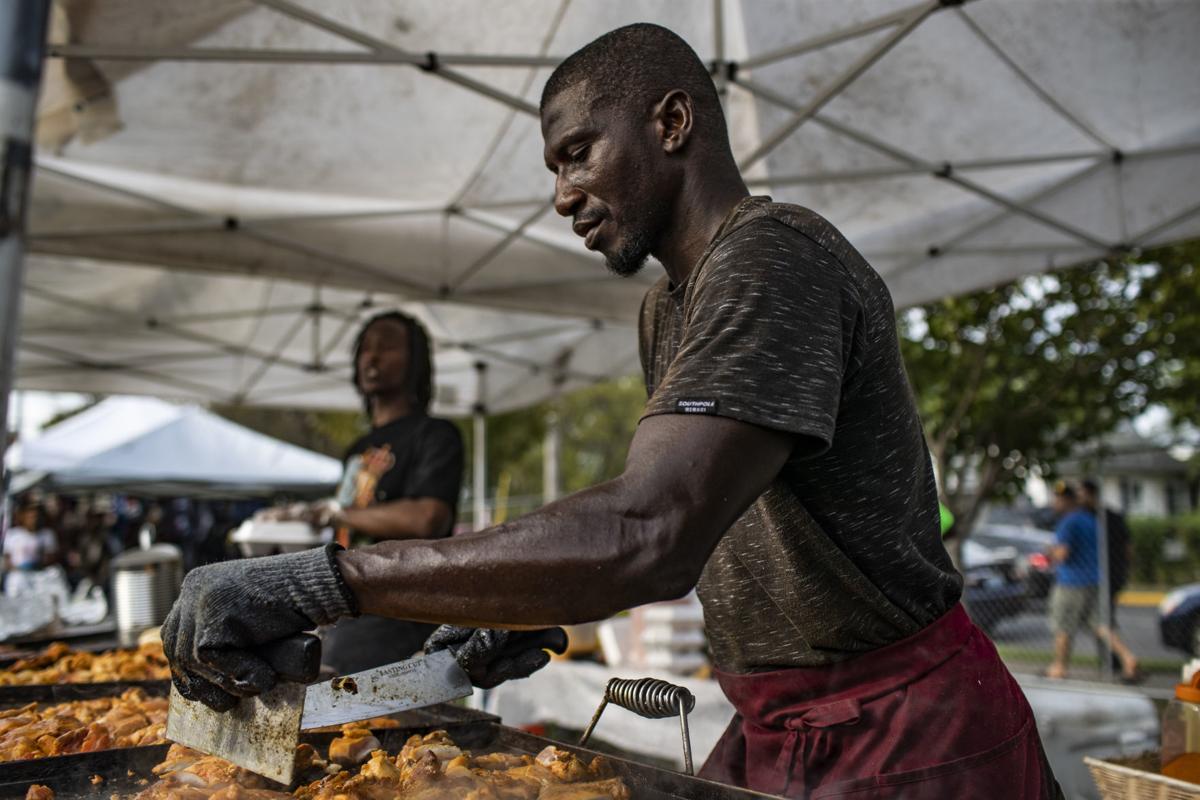 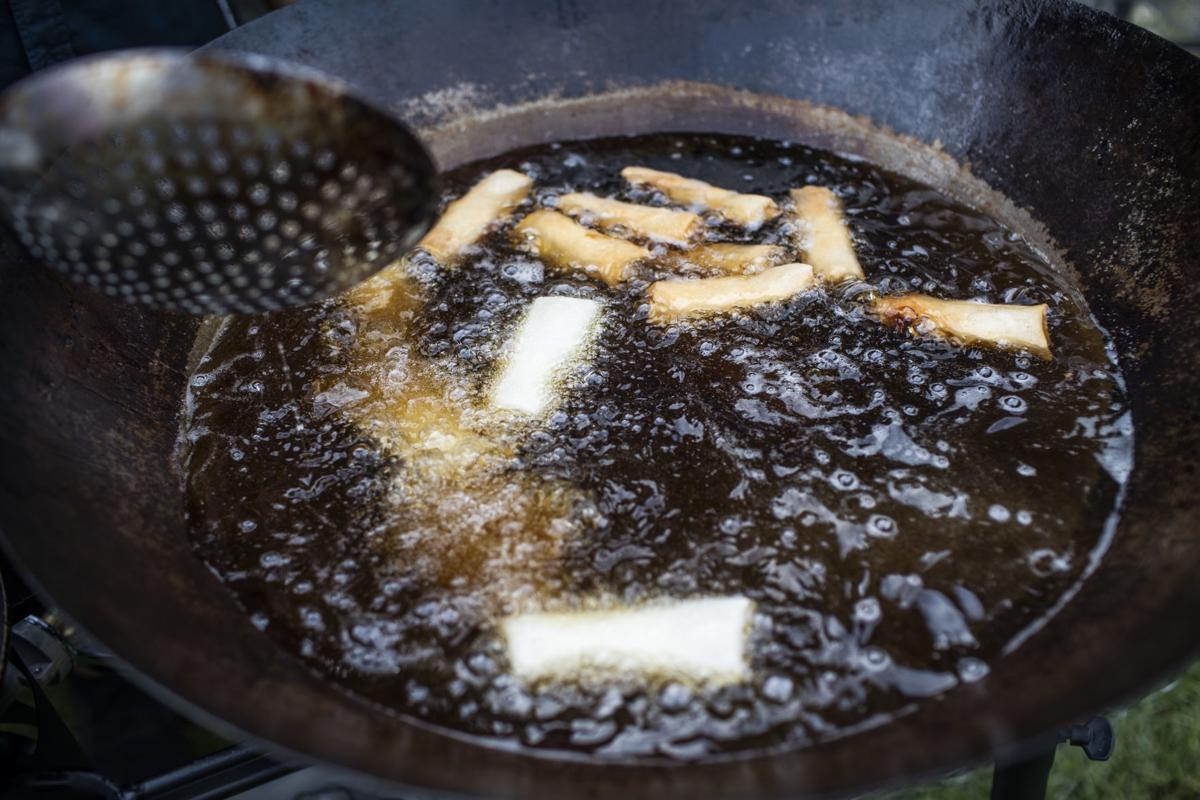 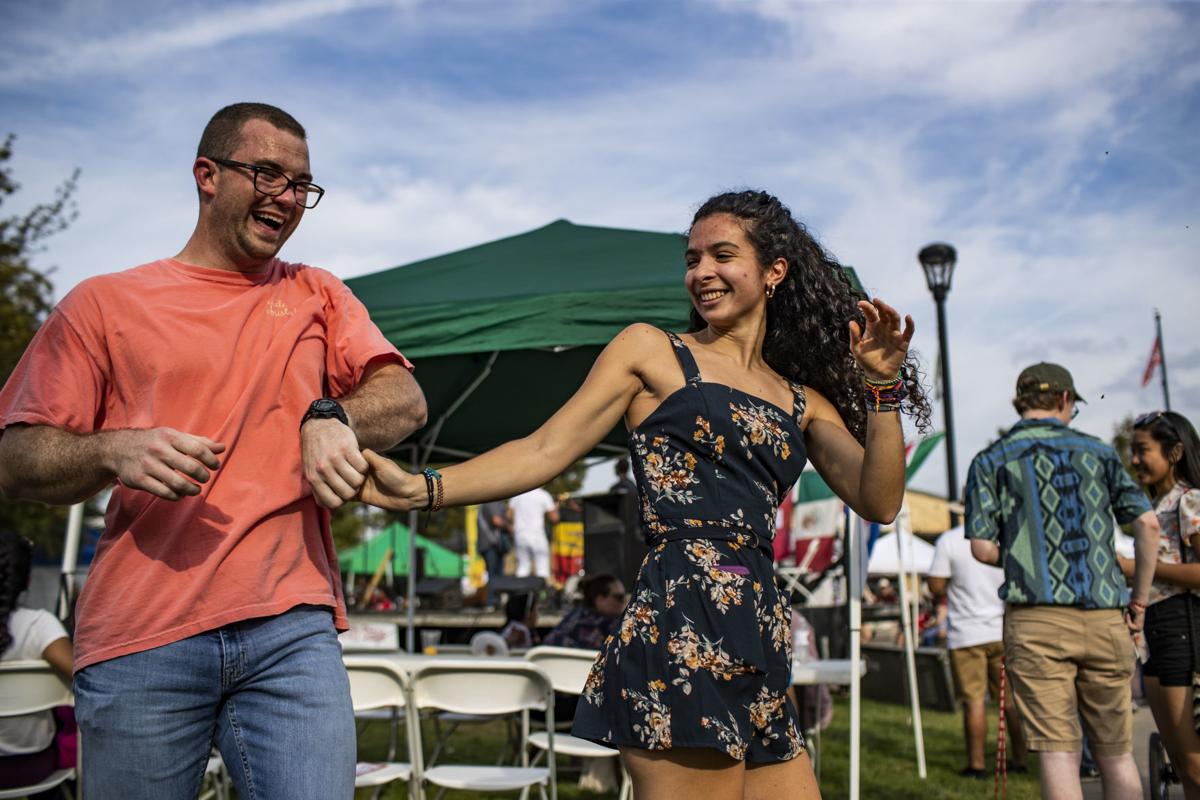 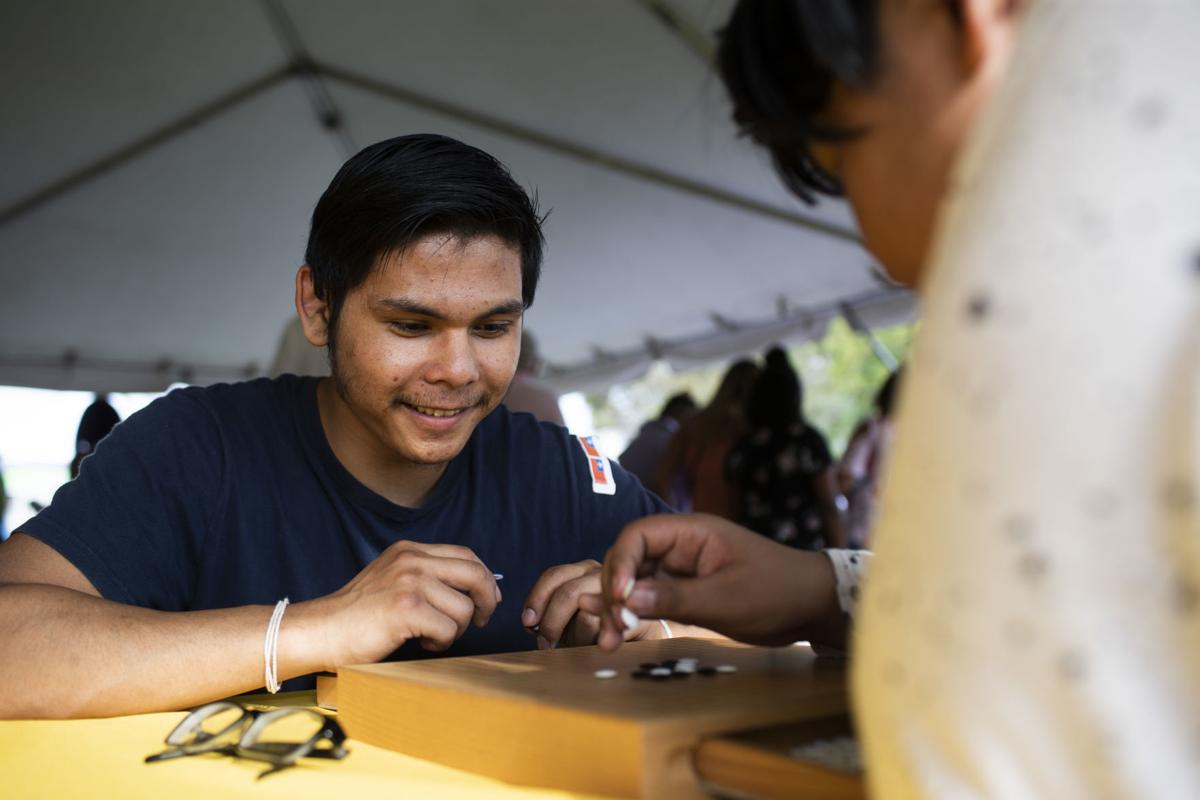 Min Htet, left, and Nyein Aung, both of Bowling Green, play a Chinese version of tic-tac-toe during the International Festival on Saturday, Sept. 28, 2019, at Circus Square Park. (Austin Anthony/photo@bgdailynews.com) 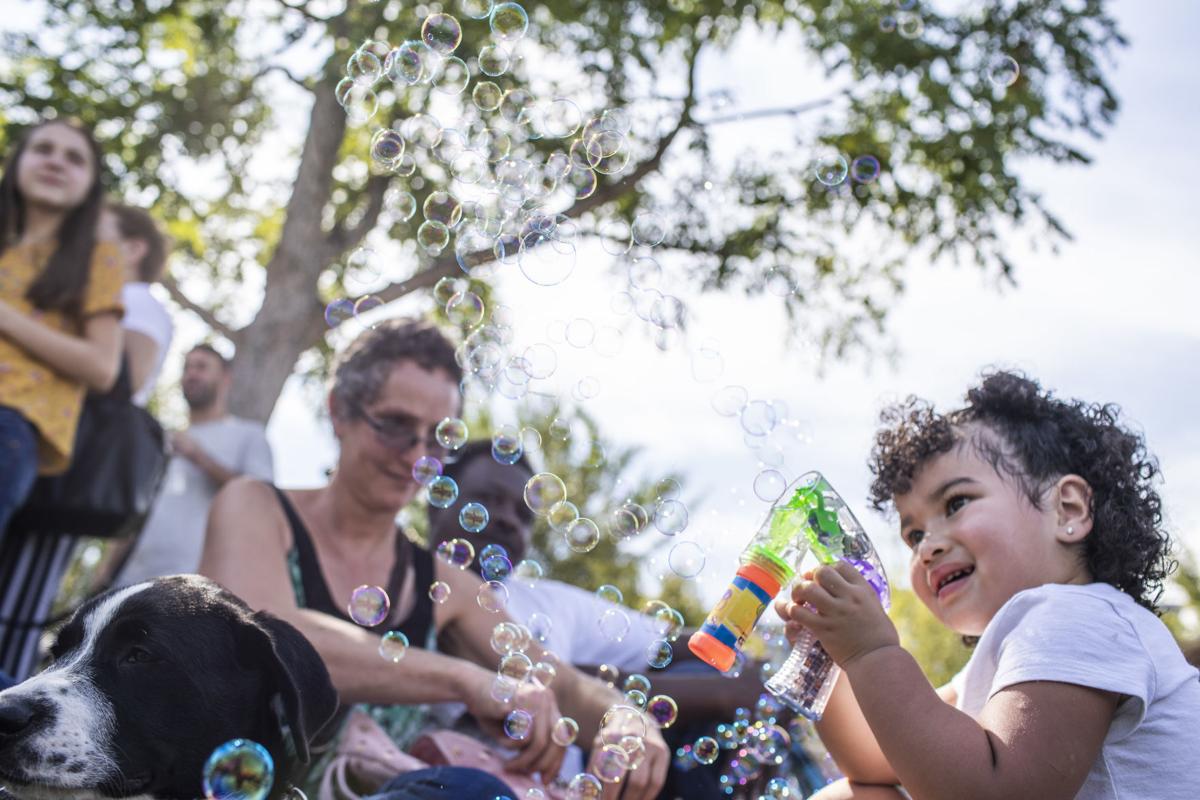 Min Htet, left, and Nyein Aung, both of Bowling Green, play a Chinese version of tic-tac-toe during the International Festival on Saturday, Sept. 28, 2019, at Circus Square Park. (Austin Anthony/photo@bgdailynews.com)

A band called Def Leprechaun jammed out to the Old Crow Medicine Show song “Wagon Wheel,” competing with the aroma of egg rolls, gyros, wonton noodles, fried tofu and even funnel cakes for the attention of the crowd that had shoehorned itself into every spare piece of real estate in Bowling Green’s Circus Square Park.

It was a cultural potpourri Saturday as Bowling Green celebrated its growing ethnic diversity with its 29th annual International Festival.

Spawned by the exponential growth of Bowling Green’s refugee and immigrant population since the establishment of the International Center in 1981, the International Festival – like the influx of foreign-born residents – is not slowing down.

In fact, International Festival Board of Directors President Angela Jones believes Saturday’s festival may be the biggest yet.

“We didn’t have any space for walk-up vendors this year,” Jones said. “We have well over 100 vendors, and we definitely have more food vendors than ever before.”

And those vendors had plenty of potential customers Saturday, even as the temperature soared into the 90s.

As a blocklong crowd of people lined up to get in Saturday morning, Jones estimated that attendance this year could approach 15,000 for the nine-hour festival.

“We’ll be very close to a record,” Jones said. “That means that Bowling Green is really committed to this type of opportunity to celebrate our diversity.”

Jones, a Western Kentucky University professor, sees that diversity as one of the city’s strengths.

“When I moved here I was surprised at how diverse my subdivision was,” she said. “I don’t think people expect to hear four or five languages spoken when you walk your dog.”

More languages than that were represented Saturday, but many of those enjoying the food, dances, music and arts saw no language barrier as people from various nationalities mingled in the audience and on the three stages.

Diane Lewis, a Warren County resident who was lounging on a grassy area with her grandchildren while eating pork barbecue on a skewer from a Filipino vendor, said she regularly attends the International Festival.

“We think this adds to the beauty of our city,” Lewis said. “We support the refugees and immigrants and believe Bowling Green is all the better for them.”

Seated nearby, Lewis’ brother Richard Thornton said his past experience as a Peace Corps volunteer gave him an appreciation for other cultures. He is glad to see ethnic diversity celebrated in Bowling Green.

“Our welcoming attitude to immigrants is a model for other cities,” he said.

Another visitor to the festival, Linda Holian of Bowling Green, has been attending the International Festival since it started 29 years ago.

“We were at the very first one, when it was in the US Bank parking lot,” said Holian, who was there Saturday with her husband Mike and 5-year-old granddaughter. “It’s important to have events like this because the world is shrinking, really.

“This festival can lead to better understanding of other cultures. There’s beauty in all cultures. We look forward to it every year.”

Jones, who has been president of the festival’s board of directors for a decade, has seen it outgrow Fountain Square Park and now stretch the limits of Circus Square Park.

While the festival brings in musical acts with national reputations like Oregon’s The Slants and Nashville-based Def Leprechaun, Jones said the local acts are the heartbeat of the festival.

“We’re fortunate to have so much local talent,” she said. “That also allows us to stretch our budget pretty far.”

Those local acts, growing attendance and help from sponsors have put the festival in good enough shape that Jones is looking forward to an even bigger event next year.

“We’ve already started our social media campaign to count down to the 30th festival,” Jones said. “We’re gearing up for a big 30th year.”

Thousands of people were able to take a trip around the world Saturday during the 29th annual Bowling Green International Festival.

People feel guilty for being American and support 3rd world refugees as a way to lessen their guilt think they are helping, but Democrats have deceived them, again!

“When I moved here I was surprised at how diverse my subdivision was,” she said. “I don’t think people expect to hear four or five languages spoken when you walk your dog.”

Good to know that they're assimilating and embracing our culture!