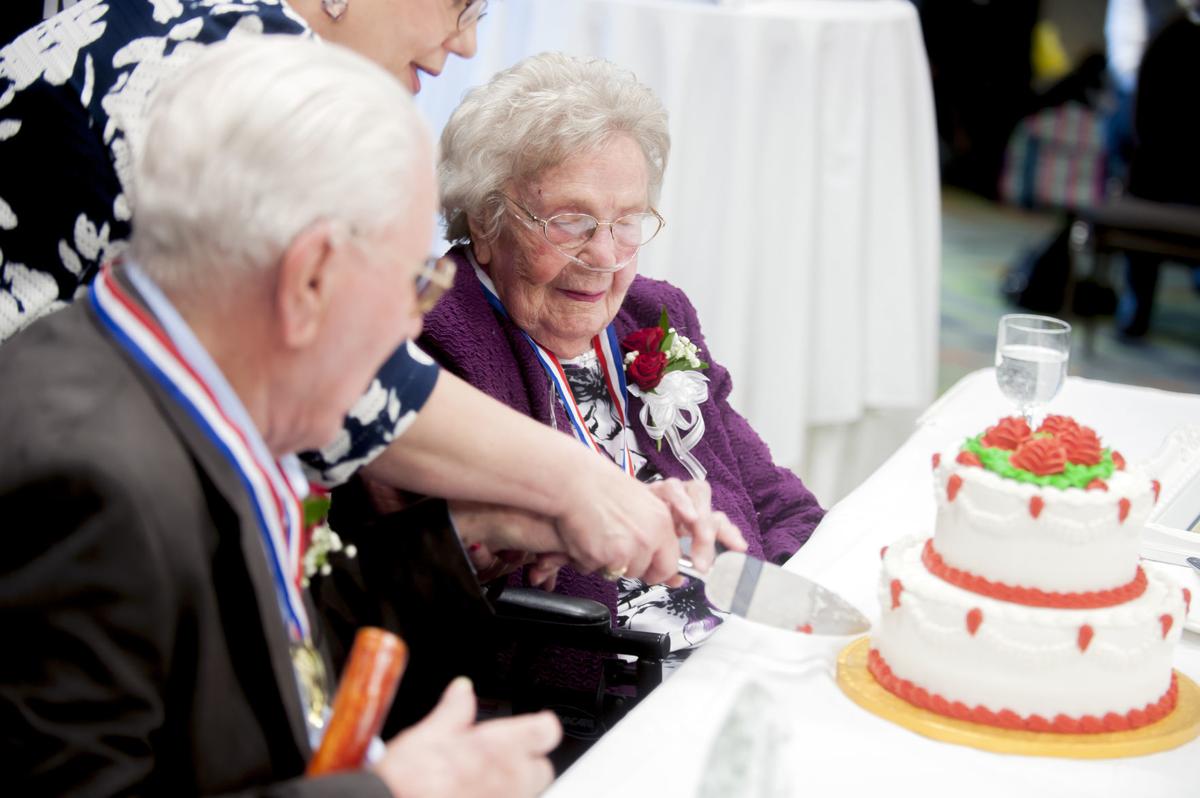 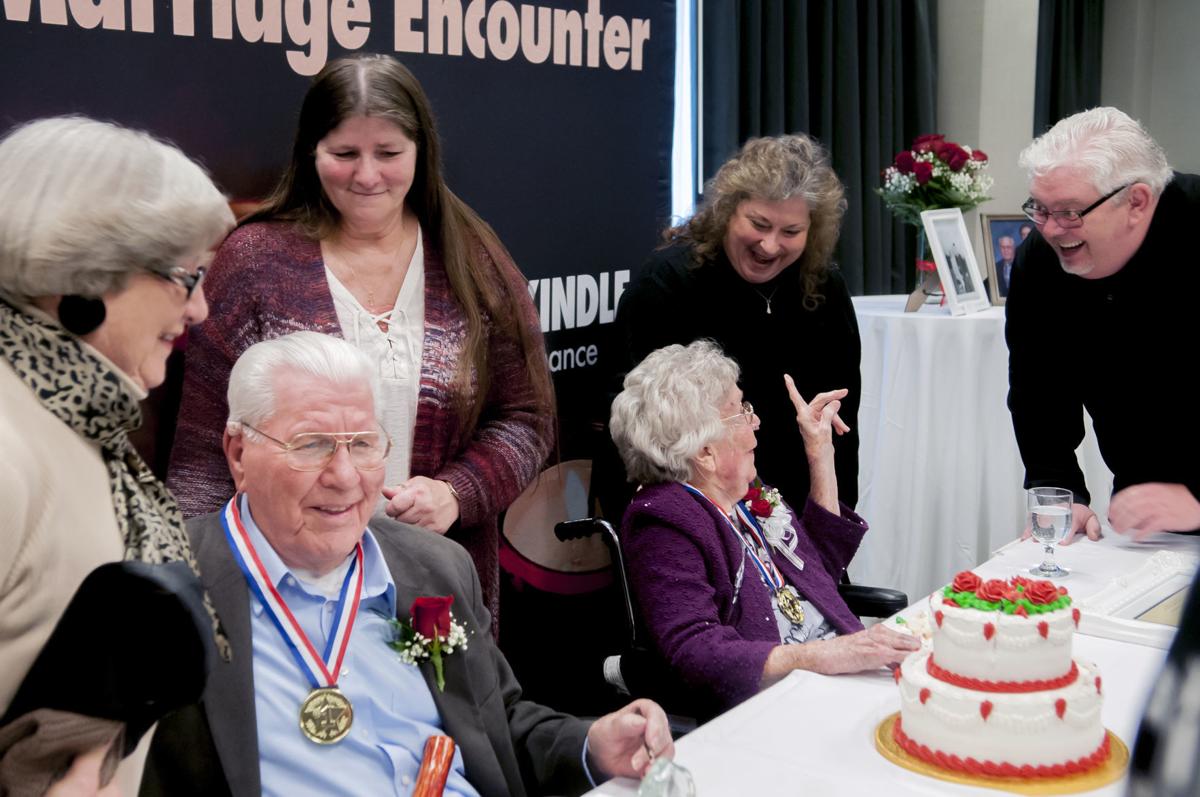 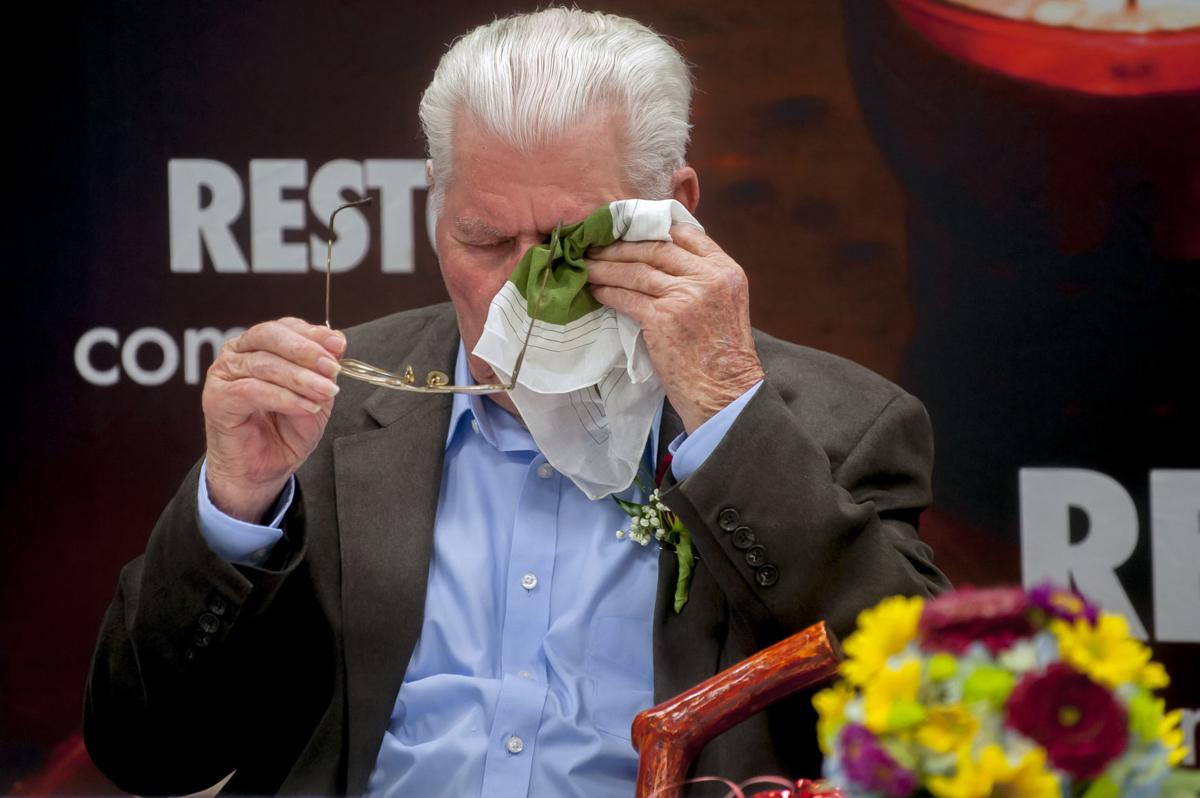 Mota Young wipes tears from his eyes Saturday, February 10, 2018, during a Worldwide Marriage Encounter event at the Holiday Inn University Plaza. Young and his wife Avanelle celebrated more than 81 years of marriage with more than 50 family and friends. (Bac Totrong/photo@bgdailynews.com) 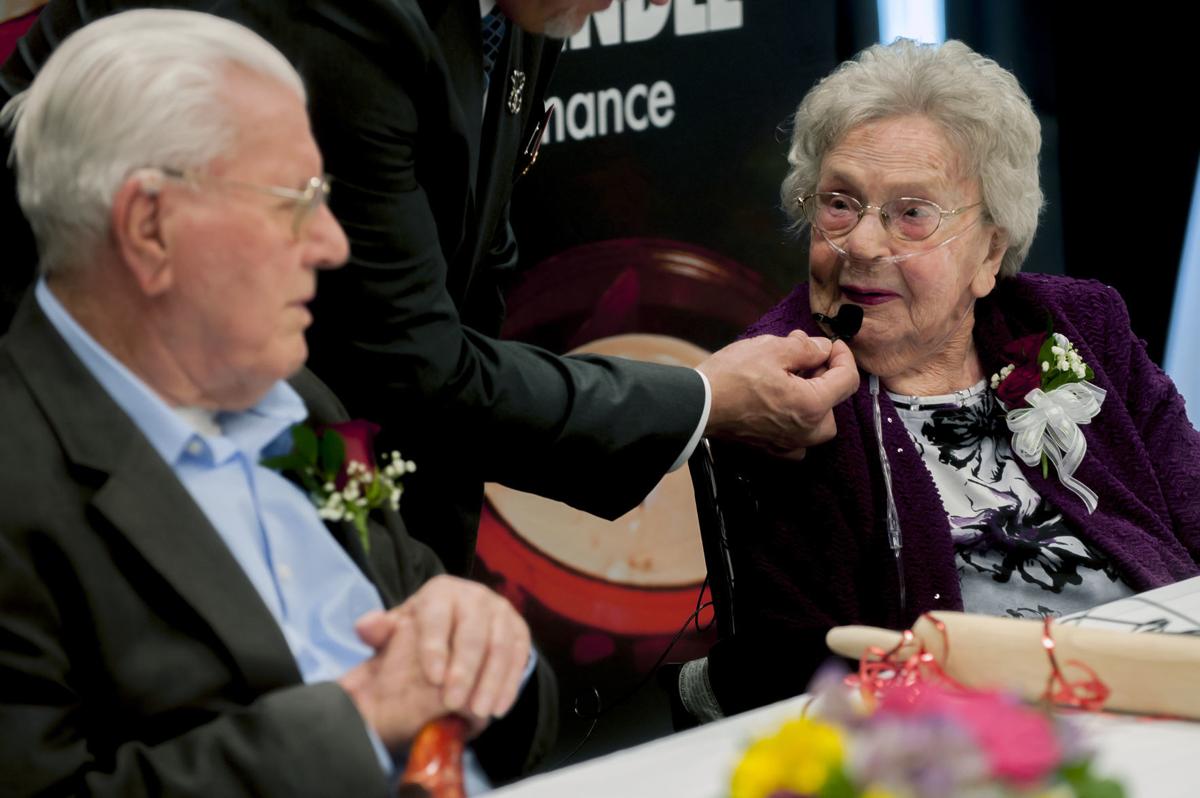 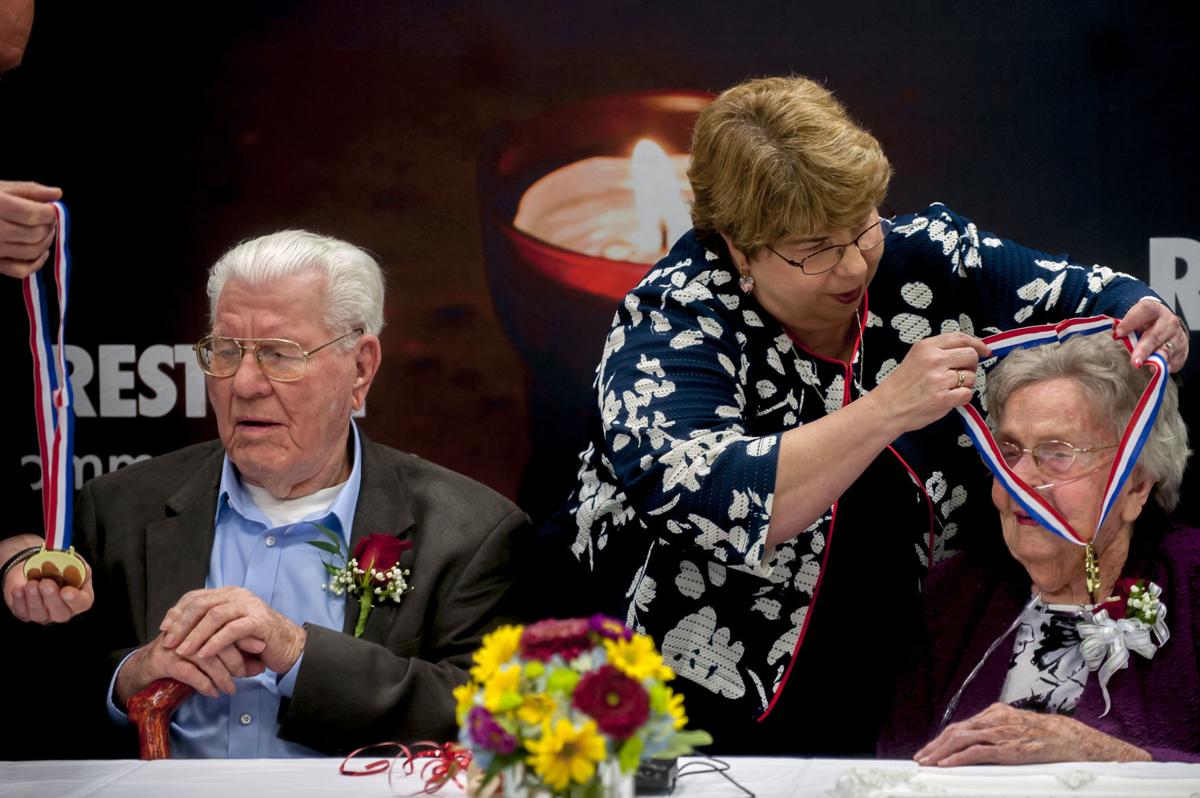 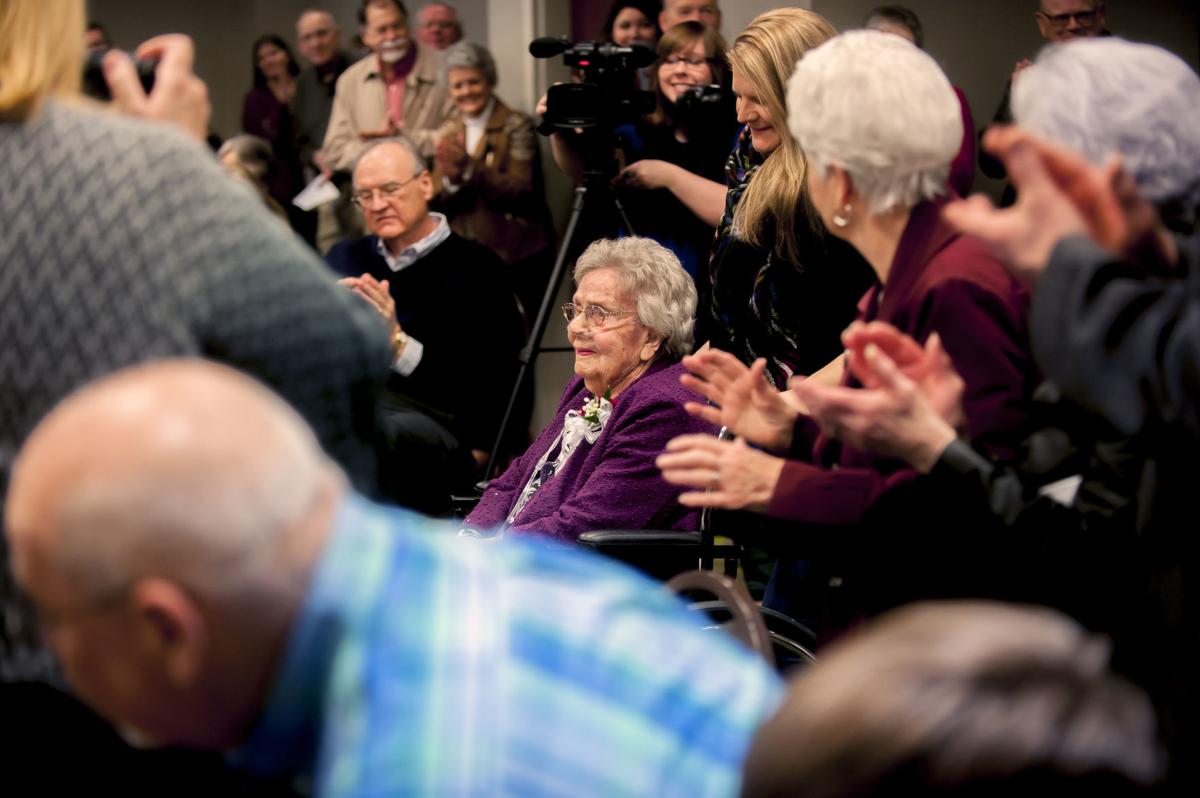 Family and friends applaud Saturday, February 10, 2018, as Avanelle Young (center) enters a banquet room during a Worldwide Marriage Encounter event at the Holiday Inn University Plaza. Young and her husband Mota celebrated more than 81 years of marriage at the event. (Bac Totrong/photo@bgdailynews.com) 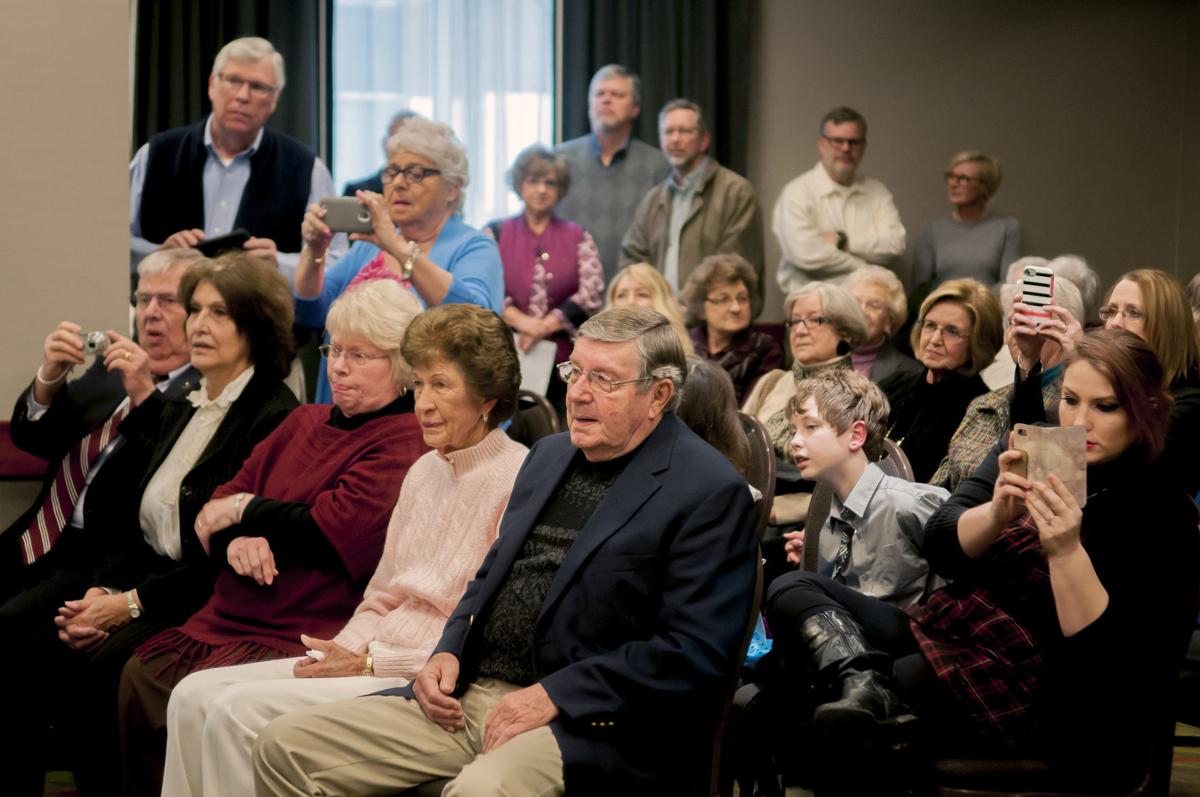 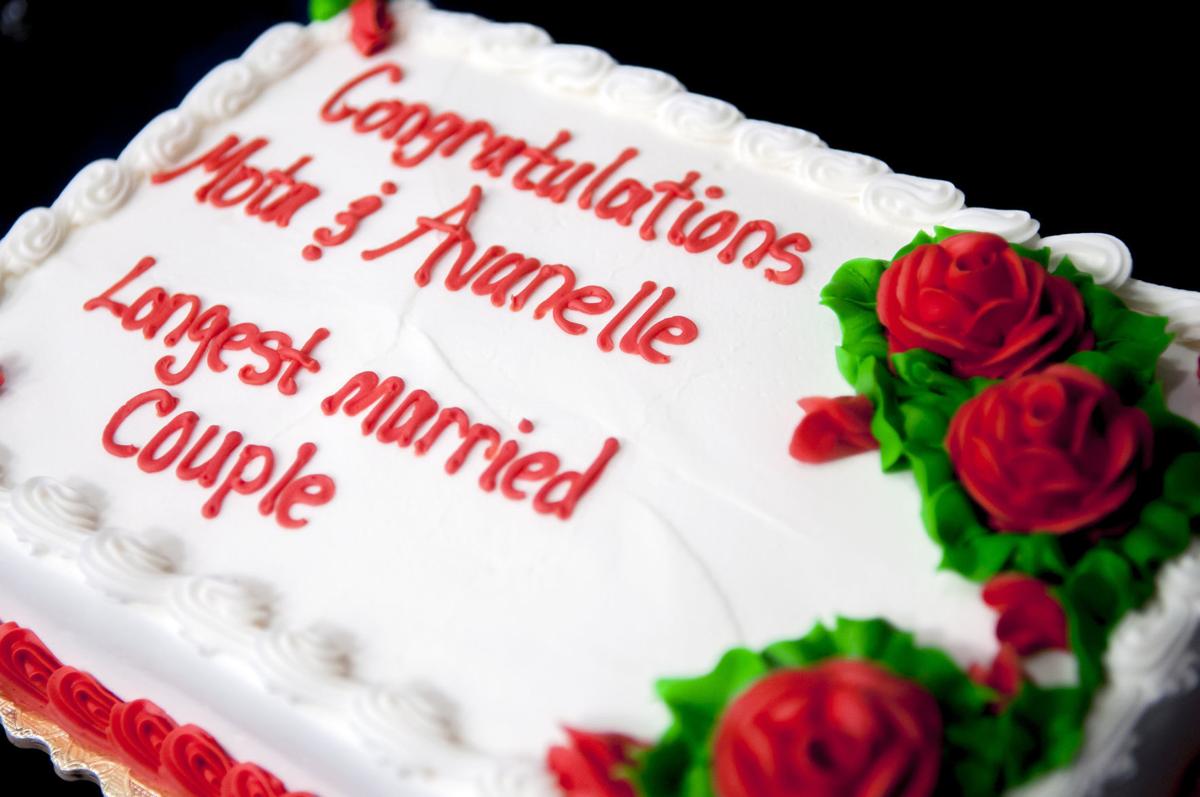 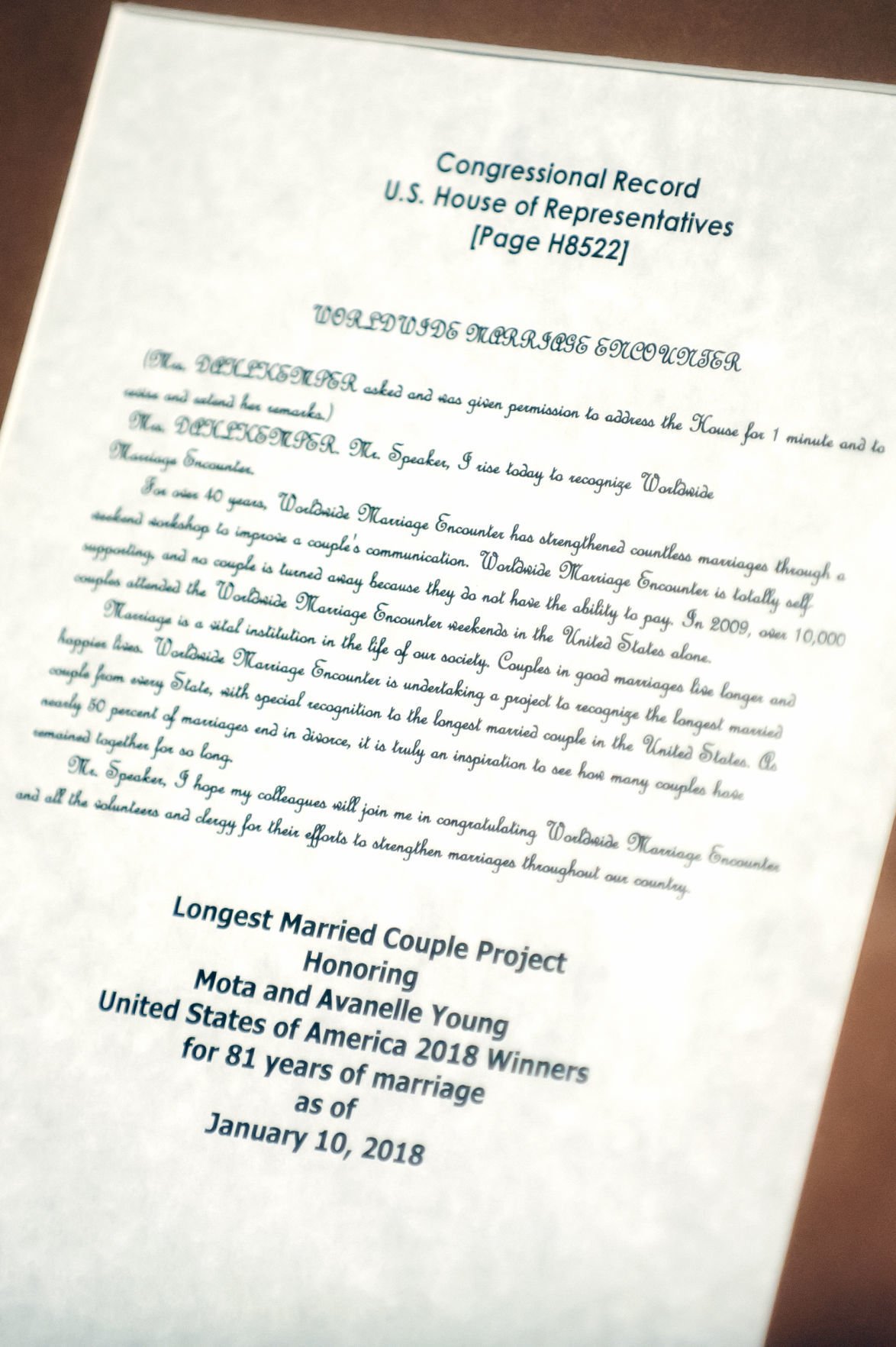 Mota Young wipes tears from his eyes Saturday, February 10, 2018, during a Worldwide Marriage Encounter event at the Holiday Inn University Plaza. Young and his wife Avanelle celebrated more than 81 years of marriage with more than 50 family and friends. (Bac Totrong/photo@bgdailynews.com)

Family and friends applaud Saturday, February 10, 2018, as Avanelle Young (center) enters a banquet room during a Worldwide Marriage Encounter event at the Holiday Inn University Plaza. Young and her husband Mota celebrated more than 81 years of marriage at the event. (Bac Totrong/photo@bgdailynews.com)

Ask Avanelle Young what has allowed her marriage to Mota “M.E.” Young to flourish after 81 years, and she says devotion to your partner is essential to a strong marriage, an answer that also sets her up for a good-natured quip at her husband’s expense.

“I looked at him like he was a winner every time, but he wasn’t,” Avanelle Young said Saturday to laughter during a ceremony recognizing the Bowling Green couple’s lengthy matrimony.

The ceremony at the Holiday Inn University Plaza honored the couple, who won this year’s Longest Married Couple Project, which was organized by faith-based program Worldwide Marriage Encounter.

Relatives escorted the couple down the aisle to a table at the head of the hotel’s Hartland Salon room, and were applauded by multiple generations of Youngs.

“We’re so thankful for the commitment you have shown each other,” Father Tom Ogg of Worldwide Marriage Encounter said during the ceremony. “That kind of commitment brings hope and lays the foundation for peace and love to flourish.”

Avanelle and M.E. met as teenagers at a party in 1936, began dating a few weeks later and were married within three months, tying the knot April 14, 1936, shortly before Avanelle graduated from high school.

At a graduation party for her, fellow seniors gave her and M.E. a rolling pin as a gag gift.

The Youngs still have that pin, and they were presented with a second pin on Saturday, along with a Bible, a lighthouse etched in leaded crystal to symbolize hope and a figurine of two swans facing one another, their heads making the outline of a heart.

The couple had three children, starting a family that has also produced six grandchildren and eight great-grandchildren.

M.E. Young, 101, served in the U.S. Army during World War II, and returned from the war to drive a bus and later a delivery truck that brought fuel to gas stations.

“I loved her so much, I hated to leave her, but Uncle Sam told me to go, so I did,” M.E. Young said. “When I came home, I was glad to get back. We had some hard times, but we made it through.”

Tim Young, a grandson, said Saturday’s ceremony came about when he was searching online last year to learn who has the record for the longest marriage.

Young’s Googling led him to Worldwide Marriage Encounter and its longest married couple project, and he submitted his grandparents’ names to the contest, eventually learning they would be recognized for having the longest marriage of any couple whose names had been submitted in the past year.

Tim Young and his sister, Cindy Young, grew up next door to their grandparents, and he fondly remembers decorating the Christmas tree for their grandparents and going out to the garage, where M.E. could be found working on a car.

The garage held an old soda machine that was usually kept stocked with Nehi grape soda, a treat for Tim.

“Their lives are an example for all of us,” Tim Young said of his grandparents. “Work hard, don’t waste anything and enjoy what you have are what they taught us.”

Guinness World Records officially recognizes a North Carolina couple’s 86-year marriage as the longest, though several British news reports chronicle a couple from India who were wed in an arranged marriage and remained together for 90 years until the husband’s death in 2016.

As M.E. and Avanelle Young ate slices of cake, they accepted well-wishes and took pictures with several people after the ceremony.

“This is more fun than having a birthday,” M.E. Young said. “I never, ever dreamed of anything like this. I’m glad we’re number one.”