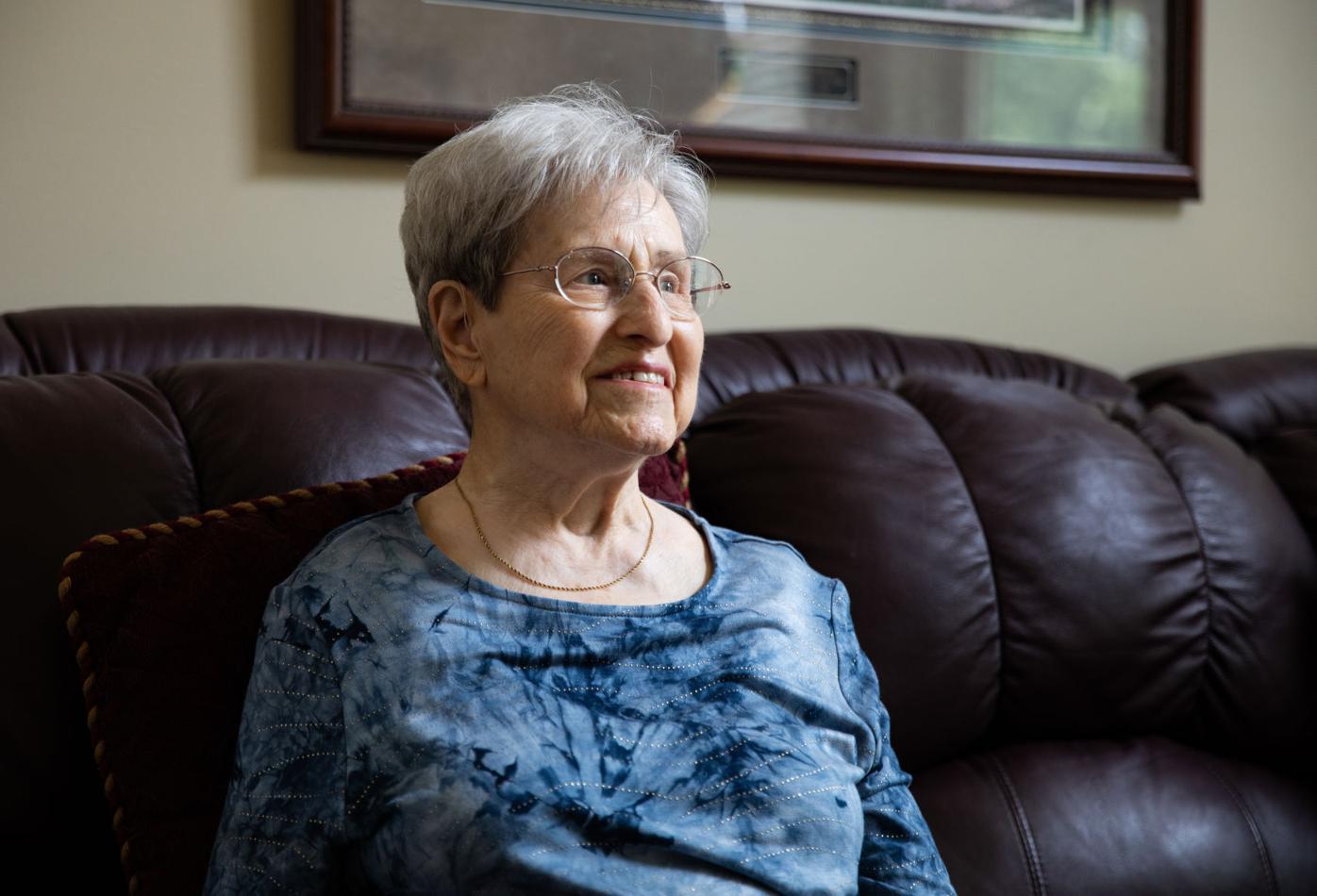 Reba Bush sits for a photo in the home she shares with her daughter Becky Gentry and son-in-law David on Thursday., Sept. 3, 2020, after celebrating her 100th birthday on Sept. 2 with family. A walk-by birthday party will be held for Bush on Sunday, Sept. 6, in Franklin at the Franklin United Methodist Church after the service. () 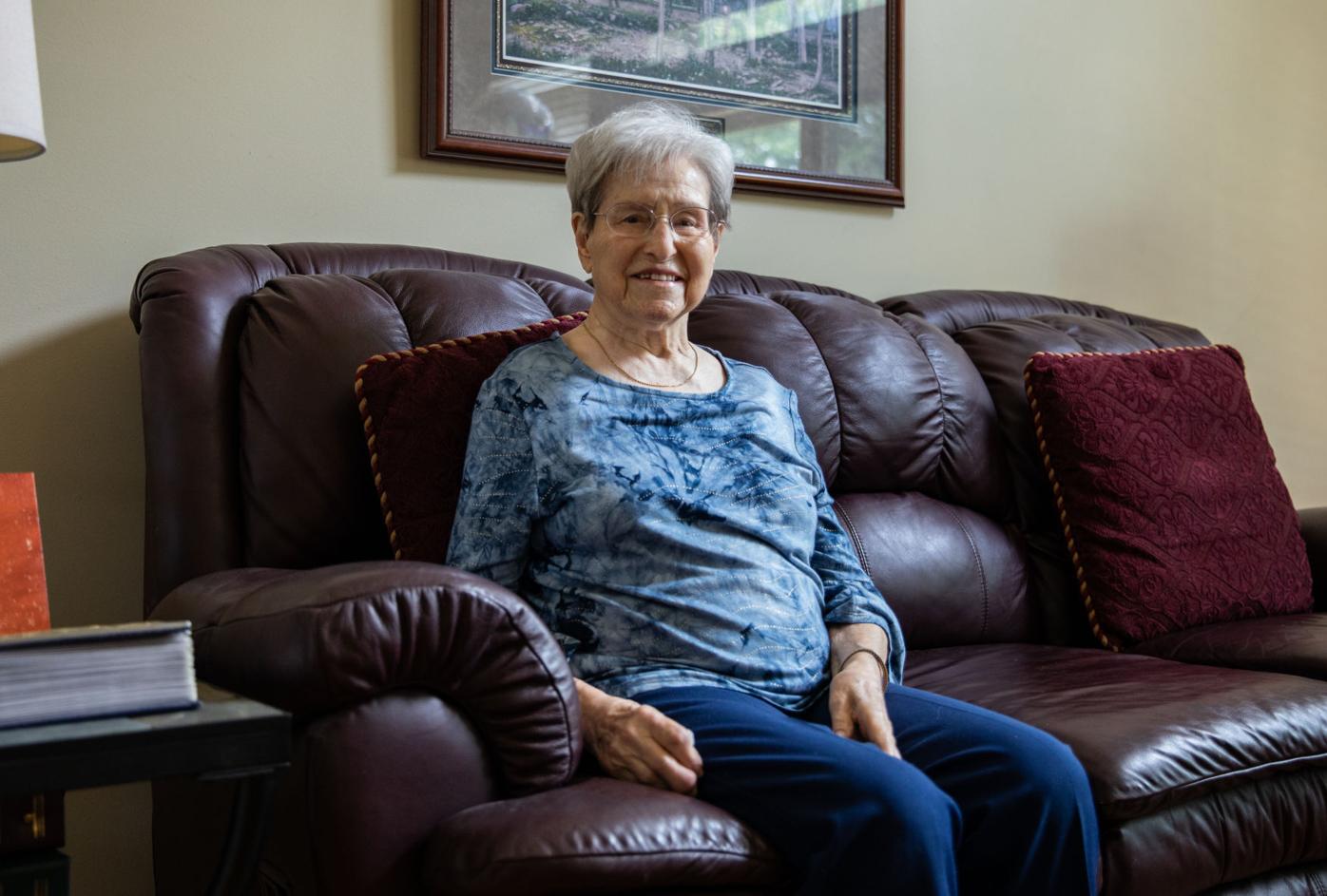 Reba Bush, an Allen County native, sits for a photo in the home she shares with her daughter Becky Gentry and son-in-law David on Thursday, Sept. 3, 2020, after celebrating her 100th birthday on Sept. 2 with family. A walk-by birthday party will be held for Bush on Sunday, Sept. 6, in Franklin at the Franklin United Methodist Church after the service. (Grace Ramey/photo@bgdailynews.com)

Reba Bush sits for a photo in the home she shares with her daughter Becky Gentry and son-in-law David on Thursday., Sept. 3, 2020, after celebrating her 100th birthday on Sept. 2 with family. A walk-by birthday party will be held for Bush on Sunday, Sept. 6, in Franklin at the Franklin United Methodist Church after the service. ()

Reba Bush, an Allen County native, sits for a photo in the home she shares with her daughter Becky Gentry and son-in-law David on Thursday, Sept. 3, 2020, after celebrating her 100th birthday on Sept. 2 with family. A walk-by birthday party will be held for Bush on Sunday, Sept. 6, in Franklin at the Franklin United Methodist Church after the service. (Grace Ramey/photo@bgdailynews.com)

Allen County native Reba Hollis Mayhew Bush observed a very special day in her life Wednesday. After being born at the dawn of the Roaring ’20s, Bush woke up that morning 100 years old.

But if you ask Bush how it felt to reach the century mark, you might be surprised with her reaction.

“It was just like any other day,” the new centenarian said. “I did get a lot of phone calls, and I got a lot of texts. I was quite busy there for a while. I also had something to look forward to. I had a small family dinner that night.”

She said the highlights of her day were two small but significant moments. The first was receiving the only gift she had asked for – a chocolate pudding cake from her great-granddaughter Kate Ford.

The second moment came at that aforementioned dinner where Bush sat at a table her grandfather had made, and she talked with her immediate family members. After all, with five children, 10 grandchildren, and 18 great-grandchildren, Bush’s family can’t always eat at the same table.

A larger gathering will happen Sunday afternoon where the public is invited for a walk-through reception at Franklin United Methodist Church. Everyone will be asked to social distance and wear masks.

The celebration was meant to be larger, but the family has had to make adjustments due to the COVID-19 pandemic. At least when she turned 99 last year, Bush was given a large party full of friends and family.

“I got to hug my friends then, I got to walk around, and I got to visit with everyone,” Bush said. “It was just wonderful.”

Even if she isn’t able to hug all her family at her centenarian celebration Sunday, Bush is hoping that she gets to hold her youngest great-granddaughter who is just 1 month old.

For over 33 years, Bush worked as a teacher in the surrounding area.

After earning her teaching certificate from Western Kentucky State Teachers College (now Western Kentucky University) Bush first moved to Barren County with her husband Wilton, where they lived for 15 years while both were teaching.

During this time, Bush gave birth to four of her five children, all while returning to college to finish up her degree.

“I was determined to walk across that stage and get that diploma,” Bush said with a smile.

After their time in Barren County, the couple moved to Franklin where they would live in the same house for 45 years. Bush finally put her teaching pen down in 1979 and Wilton followed suit in 1980.

Despite the years of happiness, her life has not been without hardship. After over 60 years of marriage, her husband passed away in November 2001. In June of 2006, she saw her son Danny pass as well.

The loss of her loved ones left a void in her life, but Bush has managed to take up several hobbies such as cross-stitching, cooking, reading and completing puzzles to keep her busy.

Through all of her hobbies, the constant thread of family exists. Her cross-stitches go toward the making of quilts for her great grandchildren, the puzzles are sometimes of family photographs and she often cooks desserts for her loved ones.

For the past couple of years she has lived in Bowling Green with her daughter Donita Thomas after moving from Franklin, but she still attends church at Franklin United Methodist Church.

“It wasn’t that she wasn’t doing fine,” Thomas said of Bush. “We were just a little bit concerned because we wouldn’t bother her until she got up and texted us. Sometimes she would forget and that’s when we would get worried. She was still driving around in Franklin two years ago and getting her hair done. She would even drive from Franklin up to here to visit.”

Staying busy is just a normal day for Bush. Just four years ago she traveled to Israel where she was able to mount a fully grown camel. Other places she has traveled to include most of Europe and all 50 states.

When asked which state was her favorite outside of Kentucky, she had a very quick answer.

“A lot of people say Hawaii, but I’ve been to Alaska twice, and I just love it there,” Bush said.

With the pandemic still waging throughout the country, she doesn’t get to do much traveling now. But after living through the Great Depression, Bush knows how to live through tough times.

“This has been stressful,” Bush said. “I have stayed in so it hasn’t bothered me too much. I have stayed busy with my cross stitching and with reading. I read a lot. I read my Bible through every year. I used to go to a lot of Bible studies. I love to have my great-grandkids come over.”

Looking back over a century of living in southcentral Kentucky, Bush has one piece of advice she would give her younger self and to her loved ones.