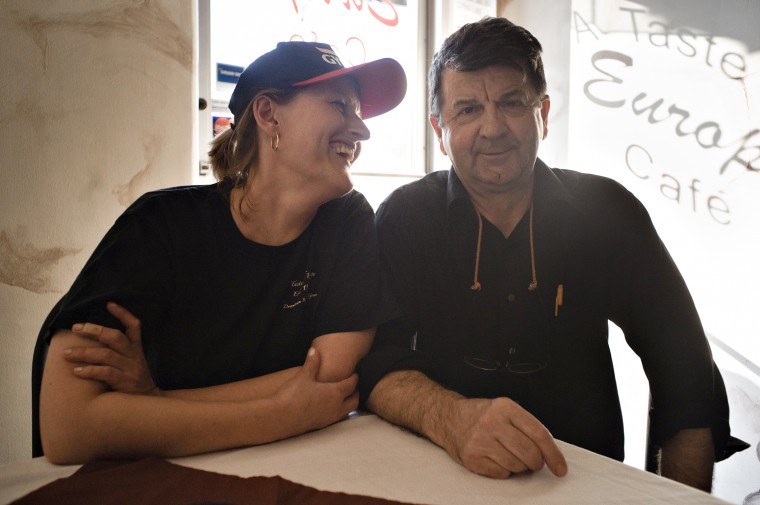 Sefika (left) and her husband Izet Varajic , both of Bowling Green, pose for a portrait Thursday May 17, 2012 at their restaurant, Taste of Europe, at 1006 State Street in Bowling Green, Ky. (Photo by Pete Rodman/Daily News) 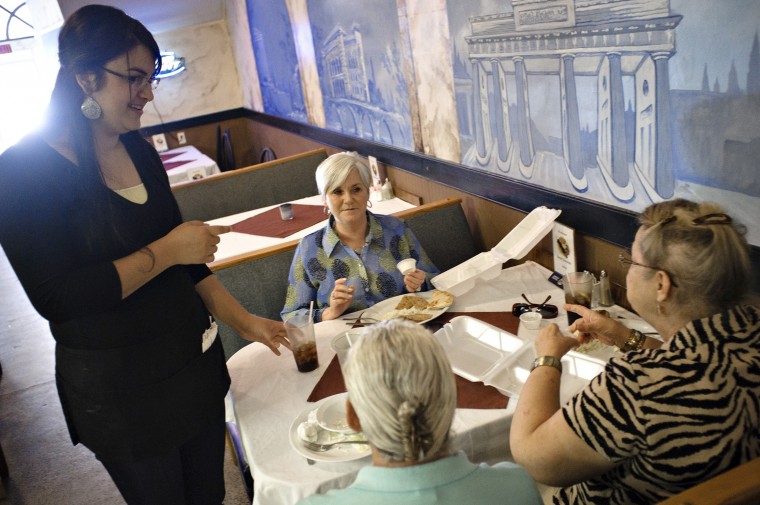 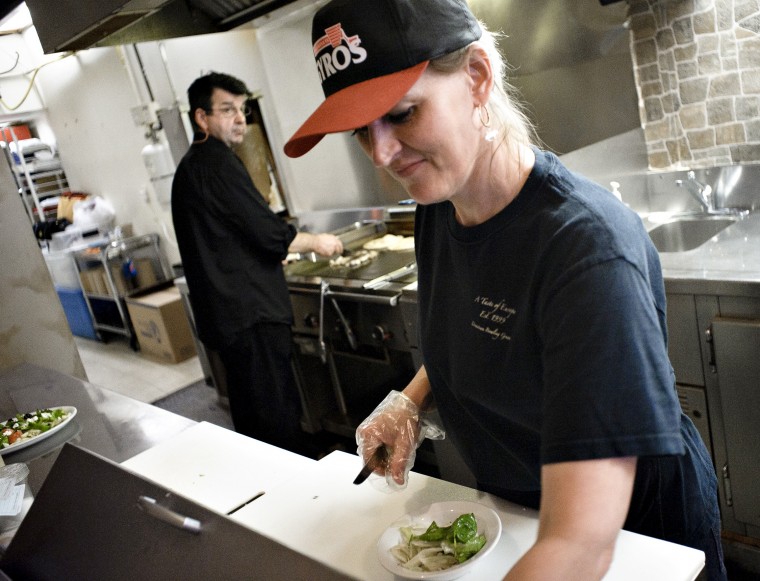 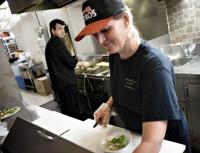 Izet Varajic (left) and his wife Sefika, both of Bowling Green, prepare a meal Thursday May 17, 2012 in their restaurant, Taste of Europe, at 1006 State Street in Bowling Green, Ky. (Photo by Pete Rodman/Daily News) 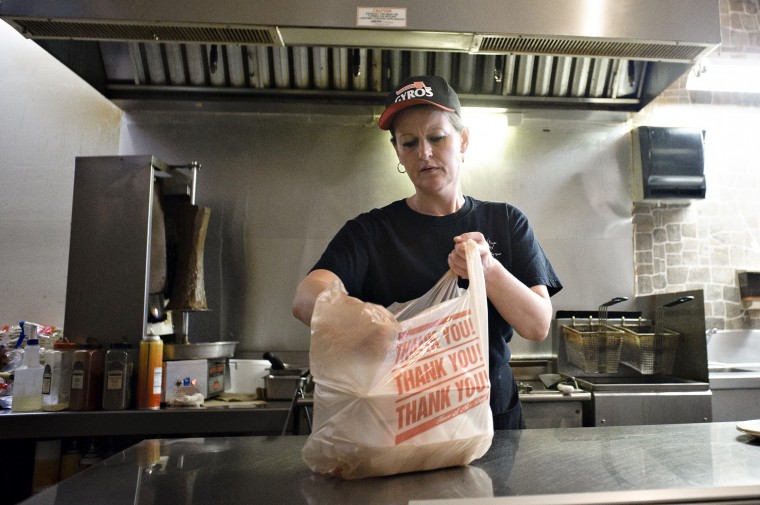 Sefika Varajic of Bowling Green prepares a carry out order Thursday May 17, 2012 at her restaurant, Taste Of Europe, on 1006 State Street in Bowling Green, Ky. (Photo by Pete Rodman/Daily News)

Sefika (left) and her husband Izet Varajic , both of Bowling Green, pose for a portrait Thursday May 17, 2012 at their restaurant, Taste of Europe, at 1006 State Street in Bowling Green, Ky. (Photo by Pete Rodman/Daily News)

Izet Varajic (left) and his wife Sefika, both of Bowling Green, prepare a meal Thursday May 17, 2012 in their restaurant, Taste of Europe, at 1006 State Street in Bowling Green, Ky. (Photo by Pete Rodman/Daily News)

Sefika Varajic of Bowling Green prepares a carry out order Thursday May 17, 2012 at her restaurant, Taste Of Europe, on 1006 State Street in Bowling Green, Ky. (Photo by Pete Rodman/Daily News)

For most Bosnian-Americans who live in Bowling Green, making the transition to a new country was anything but easy.

Families such as the Varajics, who own A Taste of Europe restaurant downtown on State Street, took a leap of faith when they began calling Bowling Green their permanent home in 1998. The Varajic family, along with hundreds of others, left their native country, Bosnia-Herzegovina, with hopes of a more promising future after an ethnic dispute erupted between the Serbs, Bosnians and Croatians, which lead to the worst war atrocity in Europe since World War II.

The estimated number of Bosnian-Americans currently living in Bowling Green is more than 5,000, she said.

Bosnian immigrants’ new hometowns were randomly selected after those seeking refuge in the United States underwent a lengthy immigration process – that eventually brought them to Bowling Green, Sefika Varajic said in her native language.

The Bowling Green International Center’s refugee resettlement program has been active since 1981, but most Bosnian families didn’t start arriving until the mid-1990s.

Marty Deputy of Bowling Green, the former executive director of the International Center, assisted many Bosnian families when they began settling in Bowling Green.

“They just work in (with the community) so well, they’re in all sorts of places,” Deputy said. “They came here just saying ‘I’m going to make it.’ ”

Bosnian immigrants have integrated well over the years and have established businesses in a variety of fields, especially the restaurant industry, she said. Most people in the community often don’t realize their favorite restaurant is Bosnian-owned.

“Some of the best restaurants in Kentucky are Bosnian (owned),” Deputy said.

They made the decision after realizing that working at a factory wasn’t what they had envisioned for themselves, she said.

“It was an easy decision for us, because my husband’s family has always been in the food business, even back home, and it was something that he’s always wanted to do,” she said.

“Most of our regular customers have been Americans, who we’ve developed relationships with throughout the years and who have openly welcomed us into the community,” Varajic said.

Along with establishing a successful restaurant in Bowling Green, their main goal has always been to provide a strong foundation for their son, Dino, and put him through school, Varajic said. Dino is a Western Kentucky University alumnus and is studying to become a doctor at the University of Louisville School of Medicine.

“Thanks to our hard work and dedication, we’ve been able to provide the best for our son,” Varajic said.

The Varajics are one of the many Bosnian refugee success stories in Bowling Green. Others, such as Mirzet Mustafic, came to Bowling Green with his wife, Ljiljana Mustafic, in 1994 to give his two children better opportunities after the war divided and destroyed the east Bosnian region, including the family’s hometown, Zvornik.

After the war, Mirzet Mustafic had to decide whether to leave his native country or stay. He said he chose to leave to provide his children with an education and a good future.

“I was glad that I was able to bring my kids here so that they could get an education,” he said in his native language.

Mustafic’s son, Mirza, is a Western Kentucky grad and his daughter, Majda, graduated from the University of Kentucky last year, he said.

“We came to Bowling Green and didn’t know anyone here. It was a huge adjustment,” Mirzet Mustafic said. “I went from working in my professional field as a lawyer to being an employee at Eagle Industries making furniture to support my family.”

Mirzet Mustafic has since not only been able to help put his children through school, but has also written a book, “Oprosti Mi,” which means “Forgive Me” in English. The book explains what it’s like to live thousands of miles away from your native country and the memories that remain after the move. It also talks about his journey creating a new life in a different place and touches on the war as well, he said.

Since the release of his book, Mirzet Mustafic said he’s had the chance to meet community leaders and talk to them about Bosnian people and their heritage.

When Mirzet Mustafic first moved here, most Americans in Bowling Green didn’t know much about Bosnians, their culture or the war that tore them away from their homeland.

Since then, the city’s complexion has changed and many people have a better understanding of Bosnian culture and improved communications with each other, he said.