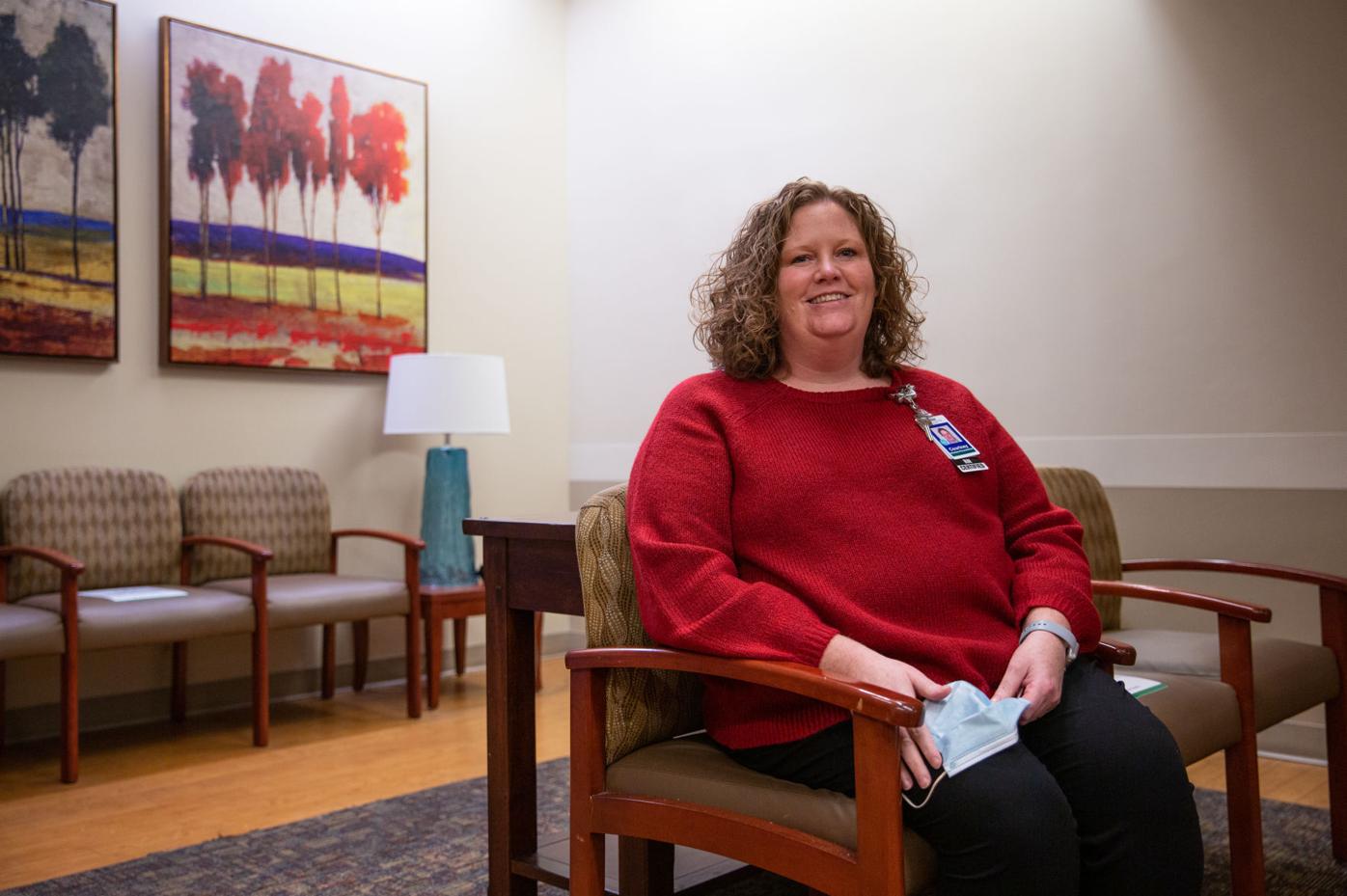 Courtney Calloway, who works at The Medical Center at Bowling Green as a nurse in the COVID-19 unit, sits in the lobby as she continues to recover from lingering effects of the coronavirus. 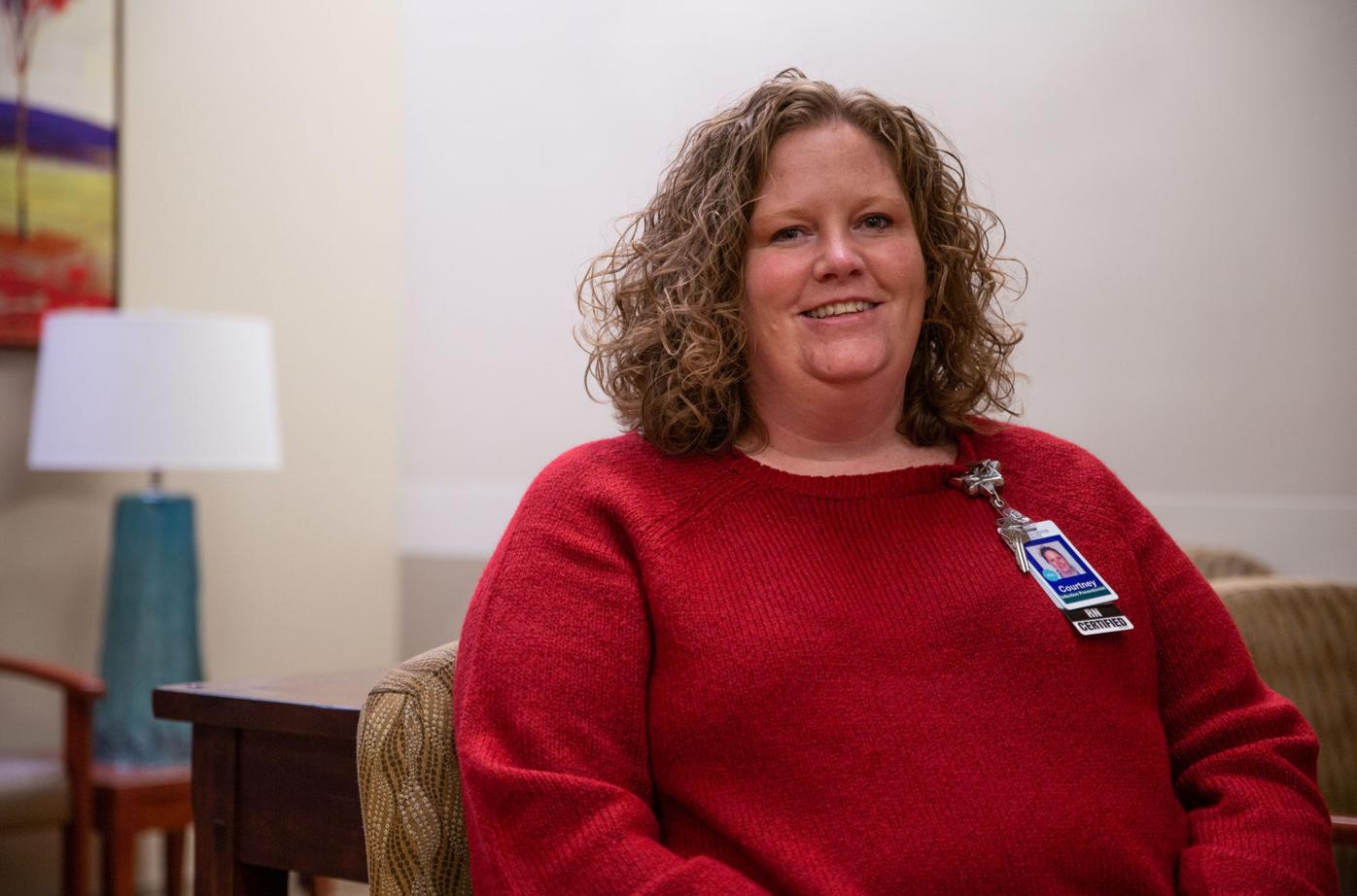 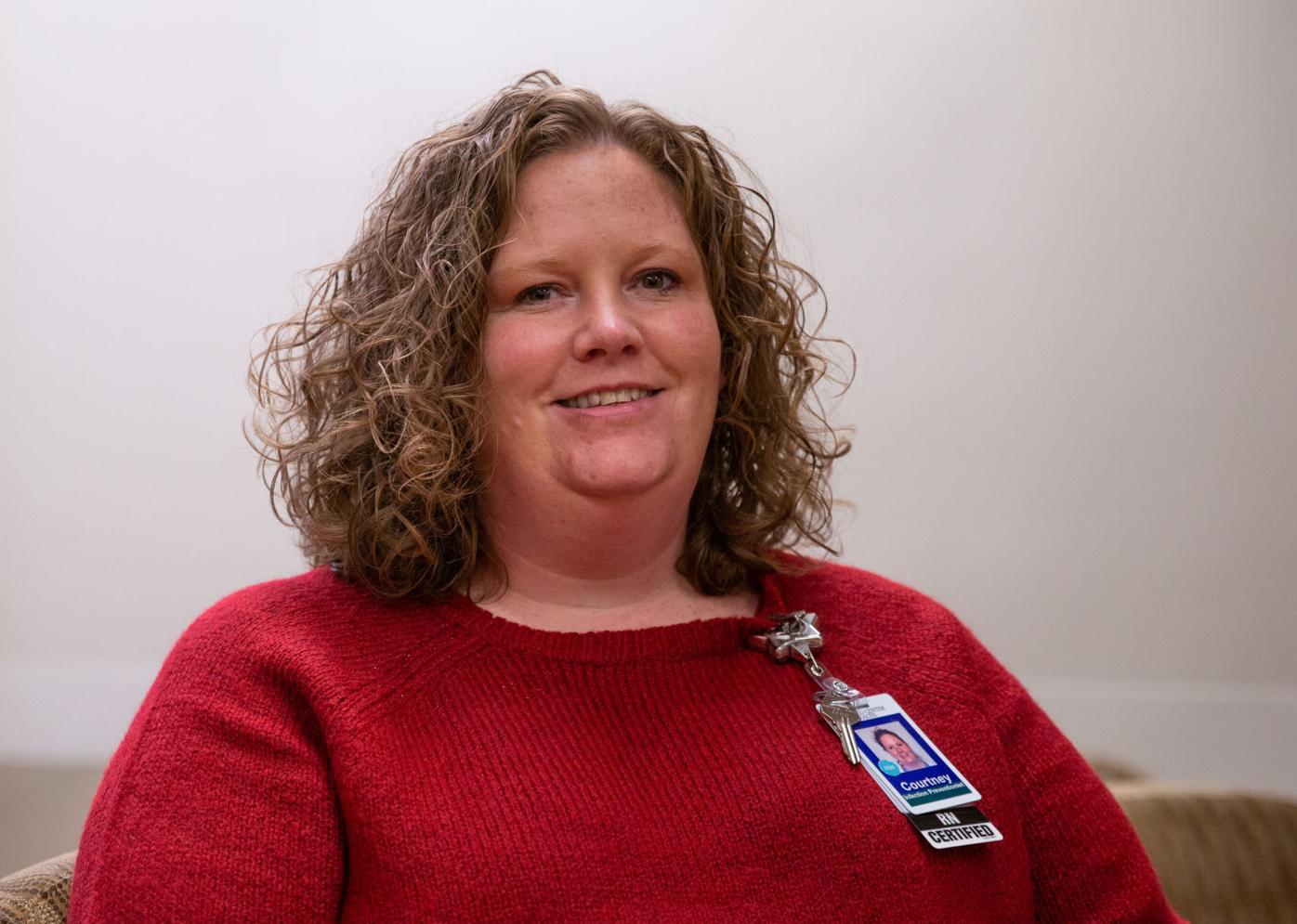 Courtney Calloway, who works at The Medical Center at Bowling Green as a nurse in the COVID-19 unit, sits in the lobby as she continues to recover from lingering effects of the coronavirus.

Courtney Calloway, 39, lifted her bedroom door blinds and saw her mother on the other side of the glass.

Instead of opening the door, Calloway remained on her side as tears slowly began to stream down her face. Her mother started crying as well.

This was the scene at Calloway’s house May 29 shortly after the nurse had been diagnosed with COVID-19.

While infected, Calloway was unable to have contact with her mother or any family members. She could only see them behind a glass door that led from her bedroom to the home’s back porch.

“We just cried,” Calloway said of seeing her mother. “She was very tearful, and she just had to lay her eyes on me. She needed to know that I was OK.”

Since the start of the pandemic, Calloway worked on the front lines at The Medical Center at Bowling Green as a nurse in the hospital’s COVID-19 unit.

Despite not going out in public unless absolutely necessary, Calloway began to feel a shortness of breath one day in May. After seeing that her temperature slowly increased, she received a rapid test that confirmed what she feared.

“By the time I got home they called me and told me that I tested positive,” Calloway said. “I was terrified, honestly, from just seeing how bad it can be and how the worst-case scenarios play out. It was scary.”

To this day, the infection prevention nurse doesn’t exactly know how she got the virus. Calloway was working in the COVID unit and had performed CPR twice in the two weeks leading up to her positive test.

Calloway then began her painful two-week quarantine away from her family, which included her husband and their four children.

“It really burdened my husband as he had to play both roles for us,” Calloway said. “He would leave me food outside on the back porch. I also was able to have a mini fridge in my room.”

Calloway felt the full scale of the virus during the two-week period.

She ran a fever for six days, lost her sense of taste and smell for seven days and frequently had headaches and shortness of breath along with body aches.

“When I was first sick that was one of the most prominent things,” Calloway said of her body aches.

“My elbows killed me. It sounds silly, but I couldn’t lay on the mattress with my elbows down because it hurt so bad. It’s one of the things I remember most,” she said.

After her two-week quarantine period ended, Calloway wasted no time in getting back to work.

However, things weren’t back to normal for the nurse who has worked for The Medical Center for more than 19 years.

“It took a couple of months to feel like myself again,” Calloway said. “I still have joint pain as a result from COVID-19, and I go to the doctor every month for that. Things also still don’t taste the same.”

Calloway continues to work in the COVID-19 unit at The Medical Center on weekends. But with state and national numbers at all-time highs, nurses like her are starting to feel the effects of the pandemic.

“There are not many days when we do not have somebody die,” Calloway said. “They are up there alone with no family, and only the nurse is there holding their hand. This is the most intimate time of their life. Our nurses are going to have long-lasting emotional affects from this.”

“They are exhausted, and they feel in a lot of ways that they are indebted to being here and taking care of these patients,” Calloway said. “They want to be here, and they know they have to be here. But at the same time, they are making huge sacrifices mentally, physically and emotionally.”

Calloway said the nurses at the hospital do have staff on site to talk about their emotional trauma.

But for many of these front-line workers, it will take time before they come close to recovering.

“I feel like I got it in a special spot where some day after this is over, I will unwrap it and kind of digest everything that I’ve went through and I’ve seen,” Calloway said.

The battle that these workers have fought over the past several months has not gone unnoticed by the rest of the hospital staff.

“She is just amazing, as are all of our nurses,” Med Center Health Marketing Specialist Glynda Chu said. “People really don’t realize the (post-traumatic stress disorder) that many nurses are going to have when they see someone out and about that reminds them of one of their former patients who has passed away.”

With the pandemic reaching new heights around the country and world, Calloway does have advice for the general public.

“I would tell people not to go out unless it was absolutely necessary, and to not ignore those little symptoms,” Calloway said. “Pay attention to your body. Think about your parents or your grandparents and those that are compromised, because those are the people who die from it.”

As Thanksgiving approaches, Calloway said she hasn’t seen her mother in-law since March, and she has only seen her 95-year-old grandmother once in that period.

But the front-line worker who is still battling a virus which has now taken the lives of more than 250,000 Americans still sees a light at the end of a very dark tunnel.