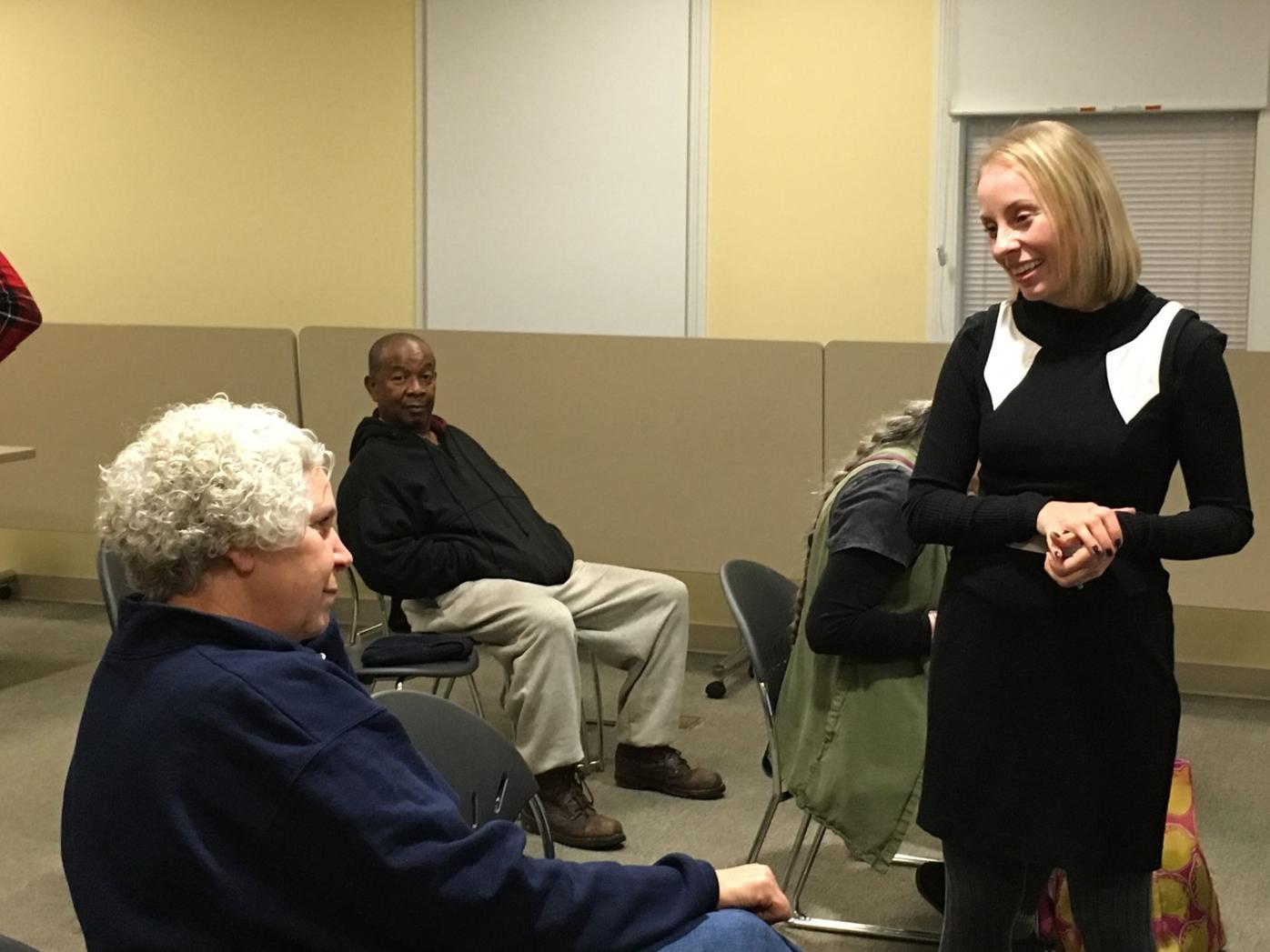 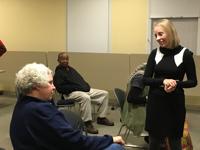 Carrie Dilley, right, chats with Sandra Moss, her childhood pediatrician, before the presentation. Dilley, who grew up in Glasgow but now lives in Florida, said she knew about 75 percent of the people who came to see her speak about Seminole architecture. 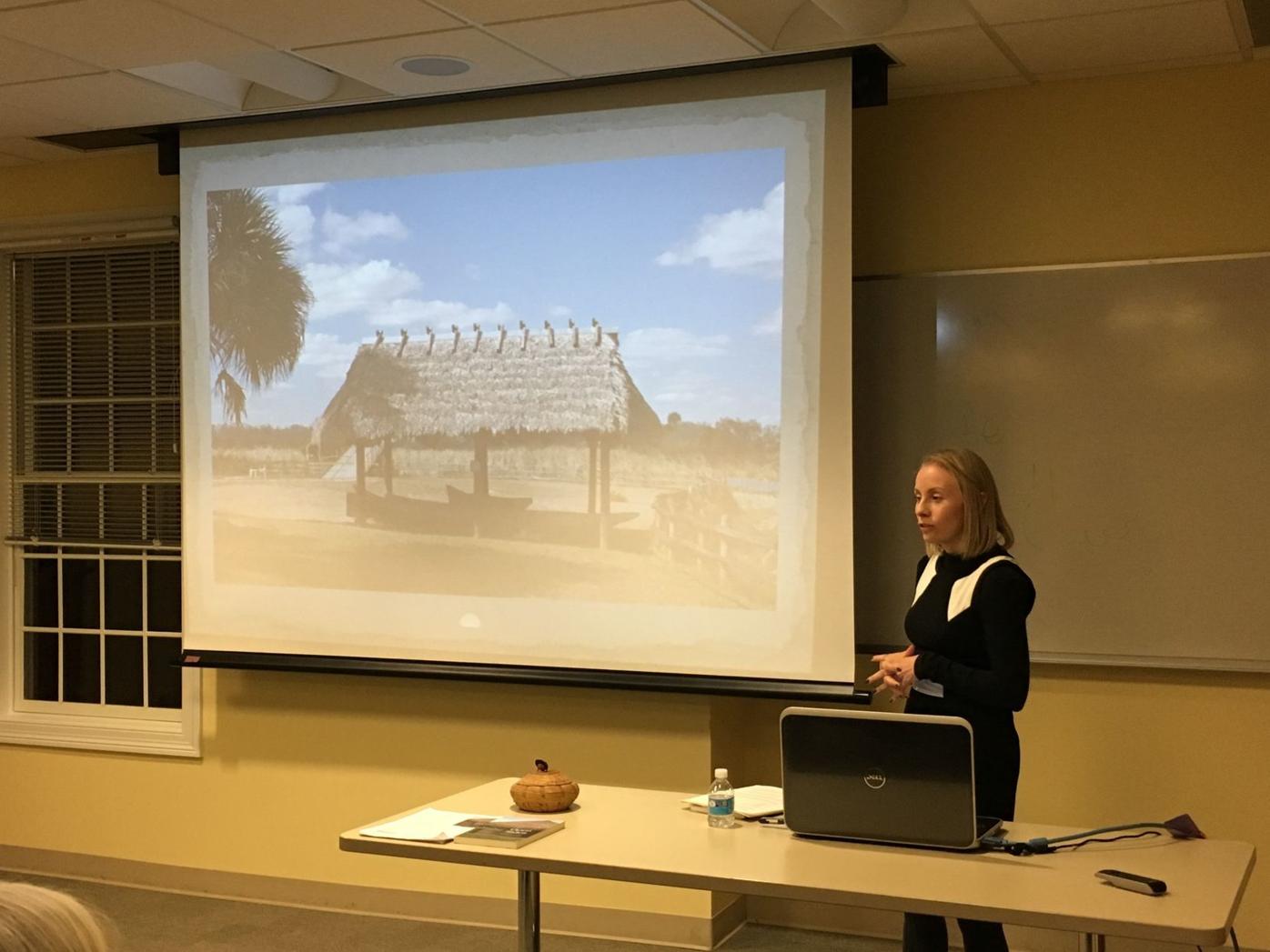 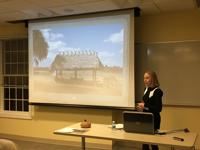 Carrie Dilley introduces attendees to the chickee, a traditional structure central to Seminole culture that she said resembles the "tiki hut" most people are familiar with. 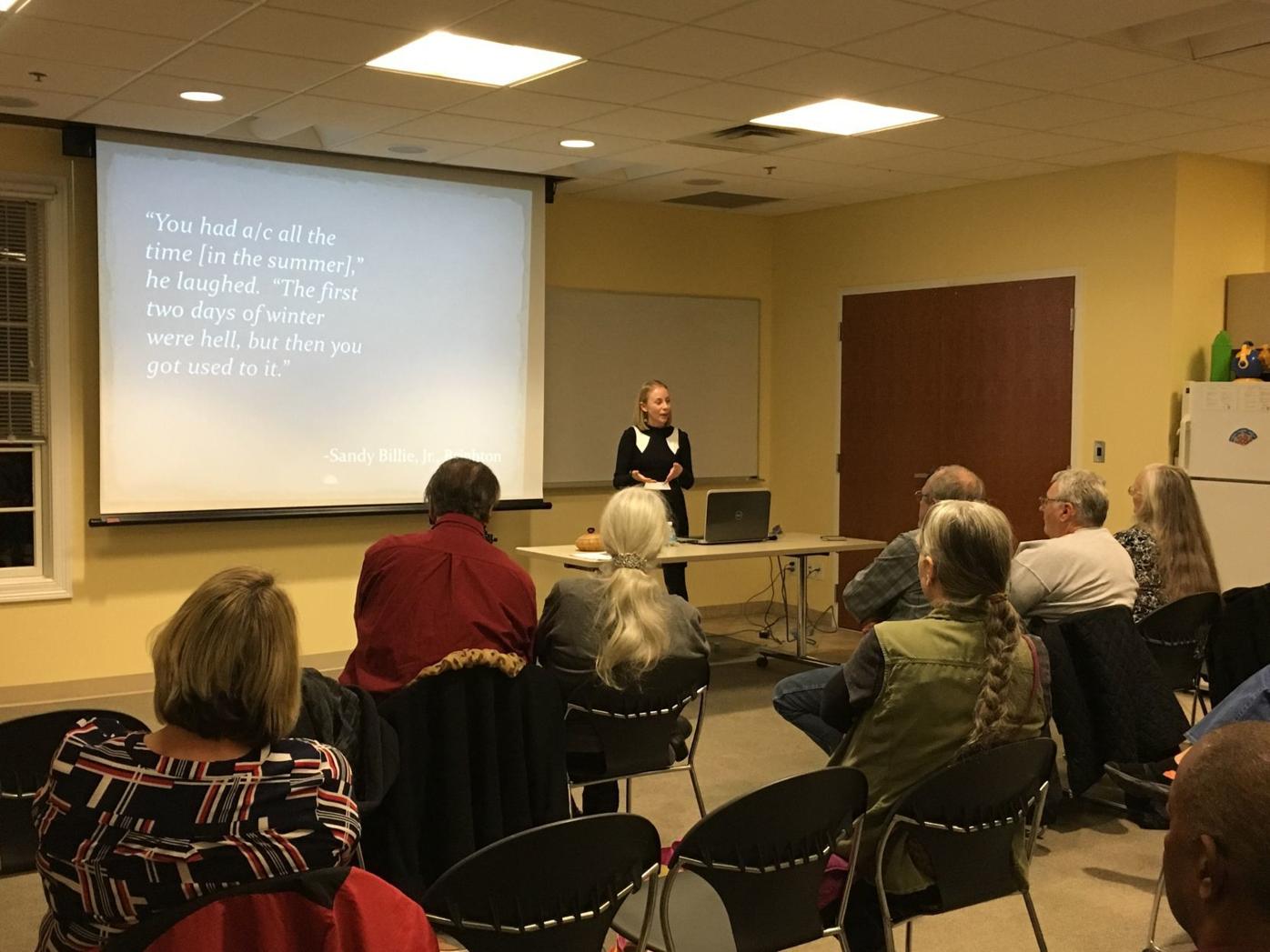 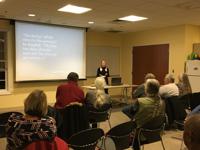 Carrie Dilley, right, chats with Sandra Moss, her childhood pediatrician, before the presentation. Dilley, who grew up in Glasgow but now lives in Florida, said she knew about 75 percent of the people who came to see her speak about Seminole architecture.

Carrie Dilley introduces attendees to the chickee, a traditional structure central to Seminole culture that she said resembles the "tiki hut" most people are familiar with.

GLASGOW – Carrie Dilley returned to her hometown this week for Thanksgiving, making a stop at the Mary Wood Weldon Memorial Library during her time in Glasgow to teach the public about the Seminole culture she’s been close to for roughly a decade.

Years ago, Dilley, who now works at the Ah-Tah-Thi-Ki Museum on the Big Cypress Seminole Indian Reservation, was tasked with conducting a survey of all the structures known as chickees on the reservation and, in 2015, published “Thatched Roofs and Open Sides: The Architecture of Chickees and Their Changing Role in Seminole Society” through the University Press of Florida.

A chickee is an architectural structure central to Seminole culture with no walls made of wooden posts and a roof of palm fronds, Dilley said, adding that they’re a common sight in some parts of Florida.

“(At first) I didn’t pay them any mind,” she said. “And so then when I was asked to do the chickee survey, that’s when I started to notice how every single one was unique.”

While chickees are traditionally made from cypress wood and fronds from the sabal palm, modern builders have access to other materials and have made chickees that take influences from an array of outside architectural styles.

“To see the spin that each builder would put on them, that to me was the most fascinating part,” she said.

Speaking to a crowd of roughly 20, many of whom she knew or recognized, Dilley said buildings have fascinated her since she was a child.

“Ever since I was a little kid, I’ve always been fascinated by architecture and my parents know and my dad would always take me by the cool places, whether it be in Glasgow or whatever road trips we embarked on, I always was drawn to the architecture,” she said.

After graduating from Western Kentucky University, Dilley went to the University of Florida, where she received her master’s degree in architectural studies, and has long been interested in conventional structures that tend to get overlooked in academic studies.

“While I was studying architectural history, the focus was really on monumental architecture by these famous architects, Frank Lloyd Wright, Richardson, all these big names, and while I thought that was really interesting, and I think there’s a lot to learn, I’ve always been drawn to architecture that was built by normal people for normal functions,” she said.

Though her survey started as a simple inventory of all the chickees on the reservation, Dilley said she quickly “took it to the next level” by studying the shapes, sizes and materials used in the structures and fleshed out her research by talking to chickee builders and conducting additional research at the Ah-Tah-Thi-Ki Museum’s library and archives and at the University of Florida.

The chickee is a key component of Seminole culture, Dilley said.

Though nobody knows how long the concept of the chickee has been around, it was once the central structure of Seminole life.

“Each chickee was kind of like the room of a house so you wouldn’t just have one structure and all the functions of the home within that one structure. Each different chickee would be for something else,” she said.

Though there would be chickees for sleeping, eating and storage, the cooking chickee was considered the heart of a “camp,” where an extended family, often numbering somewhere around 20, would reside, Dilley said.

“Each of the other structures, they might be for sleeping or for dining or for storage, but they’re all centered around that cooking chickee,” she said.

The chickee was also front and center in a conflict between the Seminole Tribe of Florida and the federal government.

In the mid-20th century, government regulations led to chickees being replaced with buildings made of concrete blocks and stucco as the Florida Seminoles’ primary means of housing, Dilley said.

Many Seminoles at the time were hesitant to move into walled buildings because of the confining feel such structures would have for people used to living in chickees, she said.

“One of the biggest problems of moving into these homes is that you can only fit maybe three, four people into each house and they’re used to living with these large extended families so it was really the start of the breakdown of a lot of their parts of culture including language because all those things were taught in the camps,” she said.

Though some Seminoles who are not affiliated with the federally recognized Seminole Tribe of Florida have lived only in chickees their entire lives, the structures went largely unused on the Big Cypress reservation until the 1980s, when there was a resurgence in chickee building, Dilley said.

By then, chickee builders had access to a wider array of materials and were willing to incorporate elements of modern architectural styles, resulting in chickees taking unusual shapes, like an A frame with thatch extending all the way to the ground, she said.

“They had ceiling fans, they had televisions. They were very modernized,” she said.

“They were treated as kind of an extension of the home so we started to see a lot of creativity as far as the materials that were used, the shapes,” she said. “The chickee builders really started to experiment.”

Before and after her presentation, Dilley talked with the people who came to see her, many of them people she was familiar with from her time in Glasgow, like Sandra Moss, her childhood pediatrician.

Moss said she came to Dilley’s presentation because she wanted to see how her former patient is doing, though the subject was a draw for her as well.

“It’s exciting to know that her education was good,” she said.

Moss said she was surprised by the intricacy and diversity that can be found in the Seminoles’ architectural traditions.

“I think the intricacy of the construction is fascinating and something you wouldn’t think about,” she said.

“The native Americans had lots of talents and their culture was not well understood and we’re just now starting to appreciate it.”

Linda Hitchcock, who came to the presentation with her husband, John Hitchcock, did not know Dilley and was motivated by her own fascination with Native American cultural history.

“I’m kind of an autodidact,” she said. “I do, you know, a lot of research and I go to lots of museums and lectures and things like that.”

She said she was impressed by the chickees and the architectural techniques used to construct them.

“It’s beautiful, it’s fascinating, it’s making use of what you have,” she said.