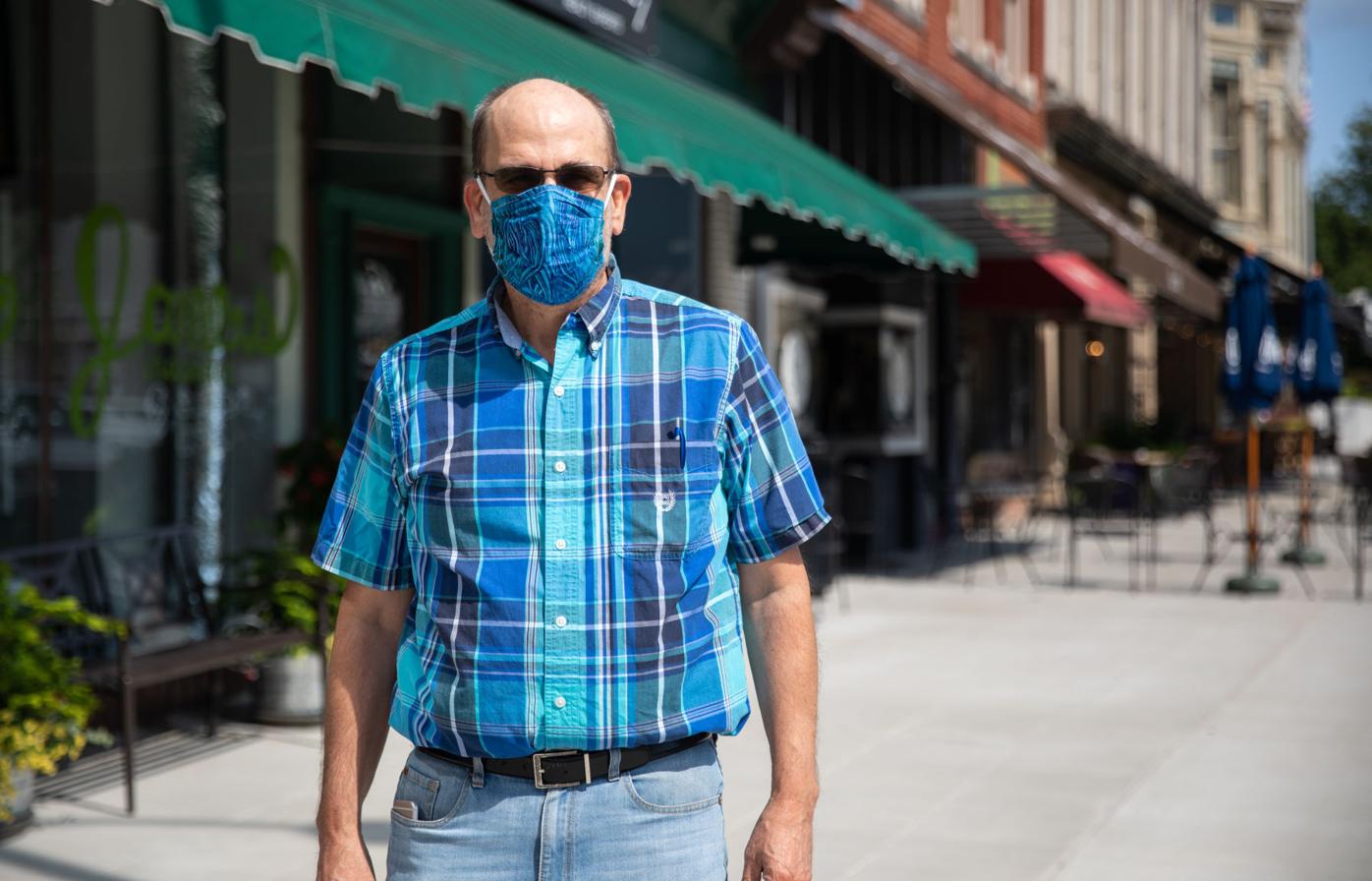 Tom Morris poses for a photo outside the businesses along Main Avenue at Fountain Square Park on Tuesday, July 21, 2020. Morris, along with co-admin Karen Wolfe Crabtree and moderator Barrett Griffin, created a "Safe Places to Patronize in Bowling Green KY" Facebook page, which now has over 2,500 members, on May 21, 2020, for community members to share positive reviews on businesses adhering to COVID-19 health guidelines and warn fellow shoppers of businesses they feel are unsafe. (Grace Ramey/photo@bgdailynews.com) 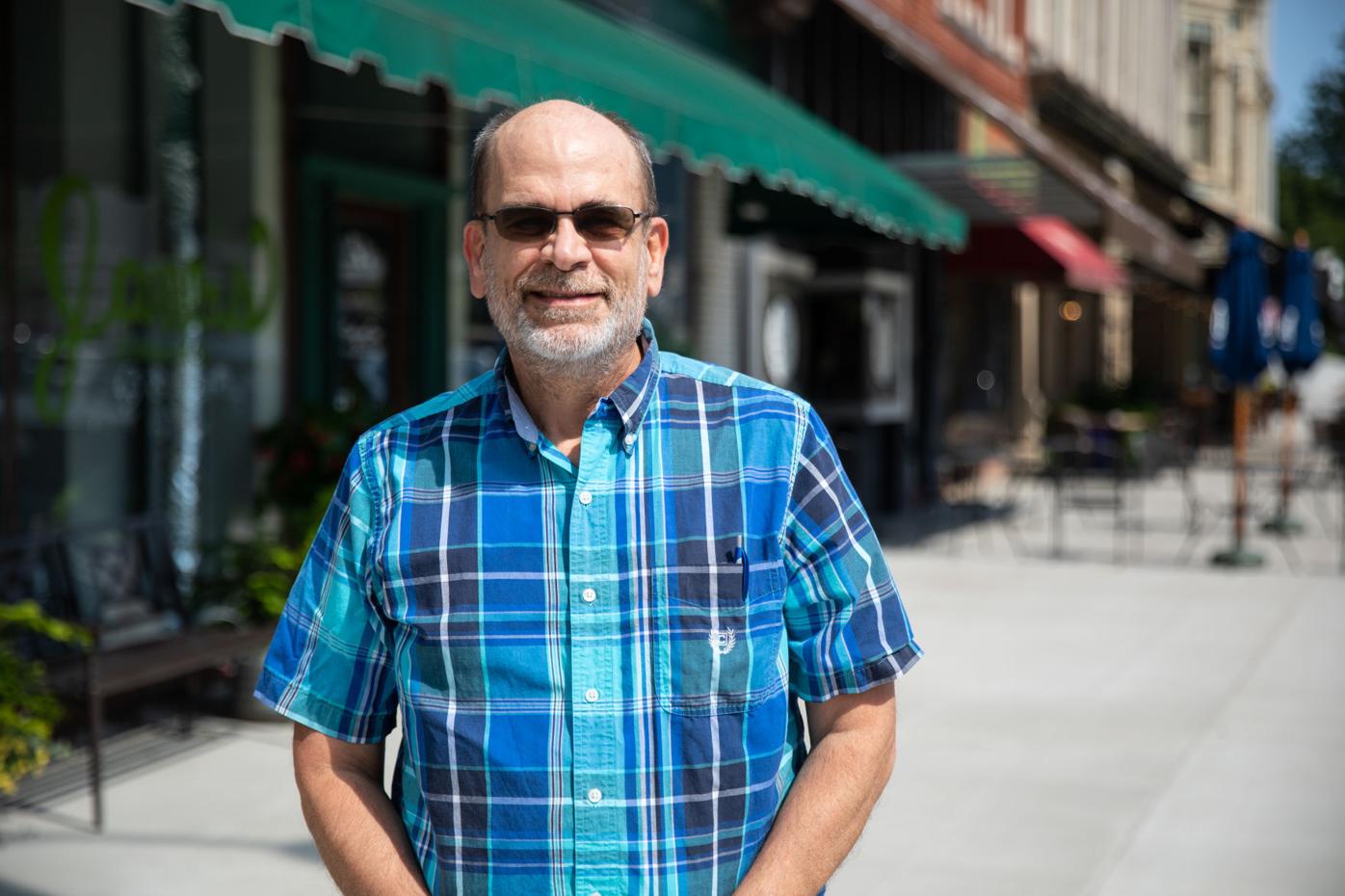 Tom Morris poses for a photo outside the businesses along Main Avenue at Fountain Square Park on Tuesday, July 21, 2020. Morris, along with co-admin Karen Wolfe Crabtree and moderator Barrett Griffin, created a "Safe Places to Patronize in Bowling Green KY" Facebook page, which now has over 2,500 members, on May 21, 2020, for community members to share positive reviews on businesses adhering to COVID-19 health guidelines and warn fellow shoppers of businesses they feel are unsafe. (Grace Ramey/photo@bgdailynews.com)

Two months ago, Bowling Green’s Tom Morris had an idea of creating a Facebook page to keep Bowling Green residents informed on which businesses were using best practices, and which ones weren’t, in light of the coronavirus pandemic.

That idea in May has evolved into “Safe Places to Patronize in Bowling Green,” a Facebook group page moderated by Morris and two other people that has grown to nearly 2,600 members.

The group is open to any residents “who are actively trying to do their part to limit the spread of COVID-19. The purpose is for members to give some positive publicity to the places that are safe to shop in” and provide warnings about unsafe places to shop, Morris said.

“I was not expecting it to be the popular thing that it was,” Morris said. “It’s been growing exponentially since it started. ... I had no idea it would grow to this size. I have just been really gratified by the response.”

Morris said he got the idea after seeing a post from a friend on Facebook wondering what businesses were safe to patronize. The group is a public forum, so anyone can go to it and read what is posted.

After sharing it with a few friends, the group began to grow, with even local dignitaries participating in the forum.

It grew so fast Morris said he had to add two administrators to keep the group running smoothly.

“I’m just glad it has been useful,” he said. “The real credit goes to all the people that are contributing to it. There have been a few people that haven’t bought into the premise of the group.”

Morris said he has received a lot of positive feedback from members of the group, and many have shared the group with friends. He said he even had one follower who told him they don’t live in Bowling Green but joined the group so they can tell their parents where to go.

Morris said the group’s success stems from its mission to try to remain positive, even when it points out businesses that fall short of creating a safe environment for its patrons.

“We try to have a positive tone,” Morris said. “We’ve had to establish some ground rules recently because there are so many people coming on and some of them don’t understand the rules of the road, so to speak. We try to give people freedom to post, but not go crazy.”

Morris has had to ban a few people, but for the most part people have been respectful of the rules.

As the group continues to grow, Morris said it will remain active to help keep people informed on safe places to patronize.

“As long as there is a need for it I hope we can continue and keep it under control and keep giving people that go there information that is helpful to them,” Morris said.