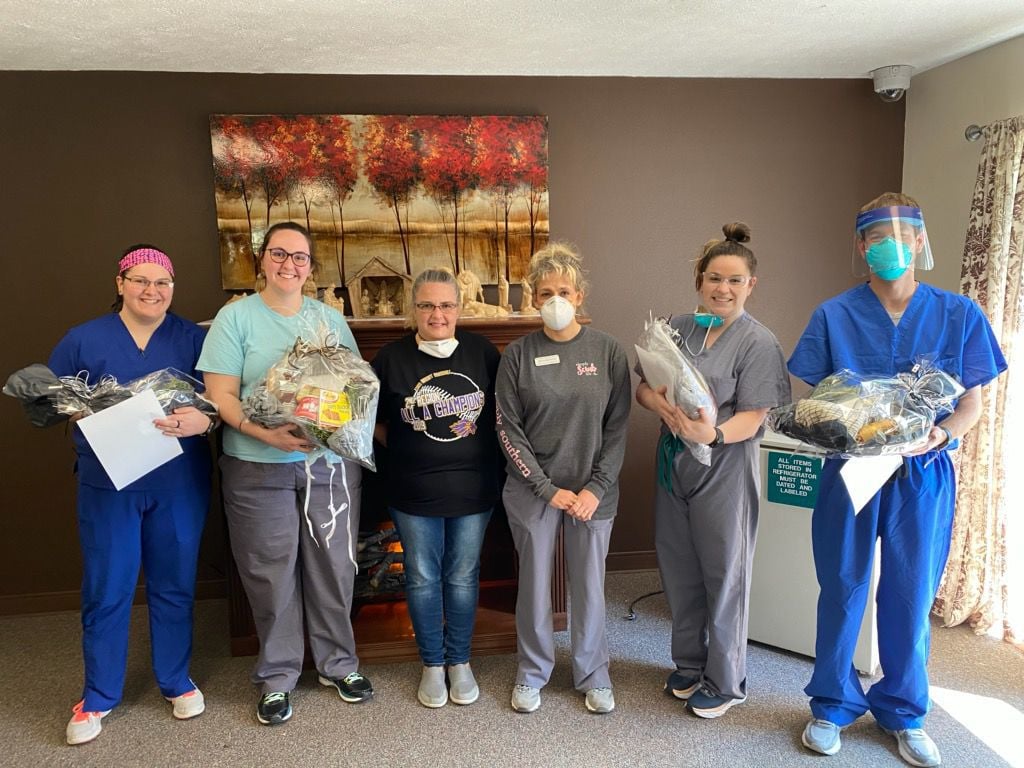 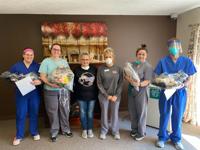 Meredith Doughty (second from right) poses with her fellow medical student volunteers assisting residents at the River’s Bend Retirement Community in Lyon County, which is battling a COVID-19 outbreak. 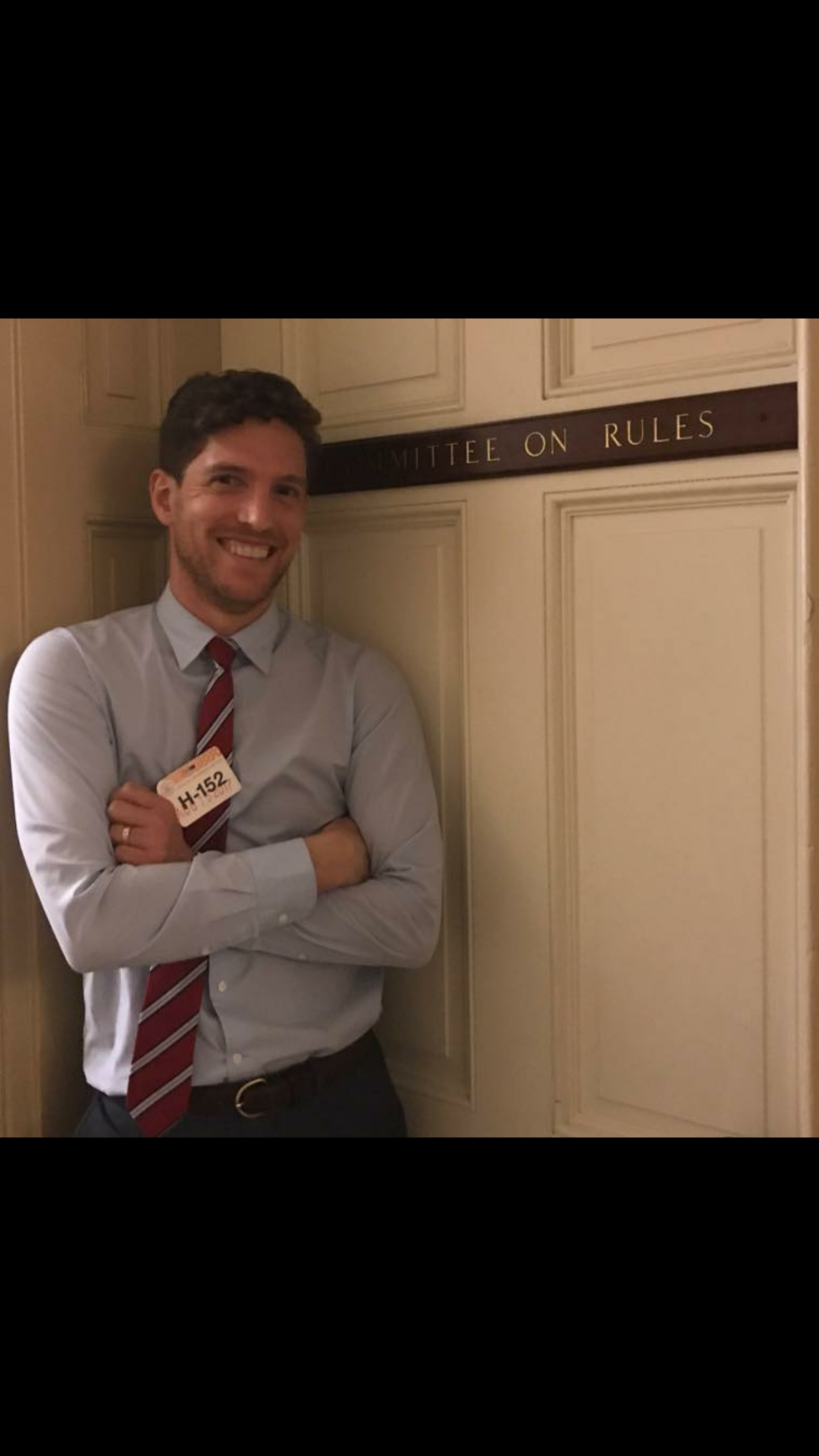 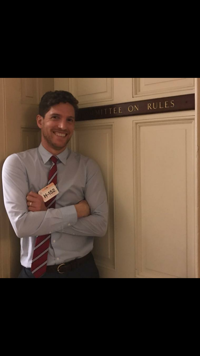 Meredith Doughty (second from right) poses with her fellow medical student volunteers assisting residents at the River’s Bend Retirement Community in Lyon County, which is battling a COVID-19 outbreak.

For more than a week, third-year medical school student Meredith Doughty has been on the front lines of the fight against COVID-19.

Doughty, a Bowling Green native who attended Greenwood High School and Western Kentucky University’s Gatton Academy, is among a group of four medical student volunteers defending a Lyon County retirement community under siege by the coronavirus.

There, eight people have tested positive for COVID-19 and at least one resident has died, according to media reports.

Since being called into service by Public Health Commissioner Dr. Steven Stack on April 9, Doughty has spent her days dispensing medication, bathing residents and talking to them as much as she can, albeit through a face mask.

For 20 days, staff at this nursing and independent living facility have been working 12-hour shifts, she said.

Speaking during one of Gov. Andy Beshear’s recent daily briefings on the virus, Stack described this team, and others working in long-term care facilities across the state, as “heroes.”

Voice quaking with emotion, he described their “staggering and profound” love for long-term care residents.

“You should all be so proud of the people of Kentucky and the work they are doing,” Stack said April 9. “We are in this together, and we are going to have to hold together.”

Residents have now been in their rooms for a month. Any time volunteers enter a room, they suit up in personal protective equipment. It’s a departure from Doughty’s normal course of study at the University of Pikeville’s medical school.

“I never thought I’d see something like this in my lifetime, but I’m glad I did” so she can be ready for any future pandemics, Doughty said.

The future is also uncertain for Dr. Ben Asriel, a Glasgow native and new doctor looking ahead to starting his residency in July with the Mt. Sinai Health System in New York City. The virus has claimed more than 12,000 lives there.

“We have more than 500 volunteers and we’re doing a lot of good work,” Asriel said.

He urged the public to keep up social distancing efforts, describing the current state of the epidemic in the country as still in the beginning phase.

“If we are not in contact with other people, the disease can’t spread,” he said.

But as cases of COVID-19 continue to climb in Kentucky, with at least 2,500 total positives and more than 100 deaths, signs of strain are already showing.

Nearly 400,000 Kentucky residents have filed for unemployment benefits in the past four weeks, The Associated Press reported.

As Beshear gave his daily briefing in Frankfort on Wednesday, protesters could be heard outside, blowing horns, chanting slogans and urging him to reopen the state’s shuttered businesses.

They returned to the Capitol again Friday for a drive-through protest, sporting signs on their cars with slogans like, “it’s about liberty” and “freedom is essential,” the Courier Journal in Louisville reported.

For his part, Beshear has said any reboot of Kentucky’s economy will be a gradual process. Kentucky has joined a coalition of several midwestern states working together to reopen their economies. Partners include the governors of Ohio, Indiana, Wisconsin, Illinois, Minnesota and Michigan.

“We are discussing best practices,” Beshear said Thursday. “And while it will be ultimately the decision of each individual state in the steps they take, this is going to help us – both on the public health side and making sure that, while it will be a phased-in approach at opening up our economy, we do it (symbiotically).”

In many ways, the coronavirus is real to Doughty in ways it might not be to others.

“I was initially kind of afraid coming here because I know how serious this is,” she said, adding she was concerned for both her own health and whether she was up to the task of taking care of residents.

Because many carriers of the virus can show mild or even no symptoms at all, it’s led many in the public to underestimate its threat, Doughty said.

“It’s really these compromised individuals that are at the most risk,” Doughty said.

Asriel, a longtime New York City resident, compared the virus to a natural disaster, a metaphor born out of his experience weathering hurricanes Irene and Sandy, which was comparatively more destructive.