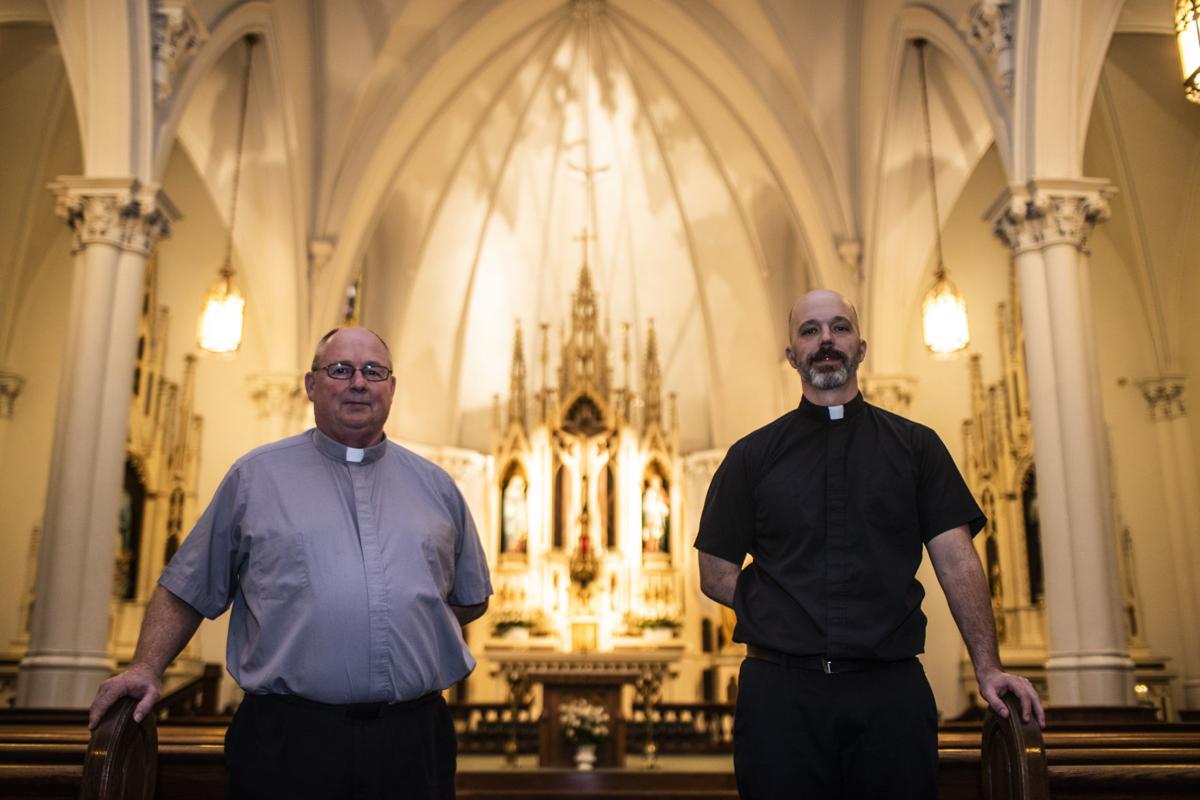 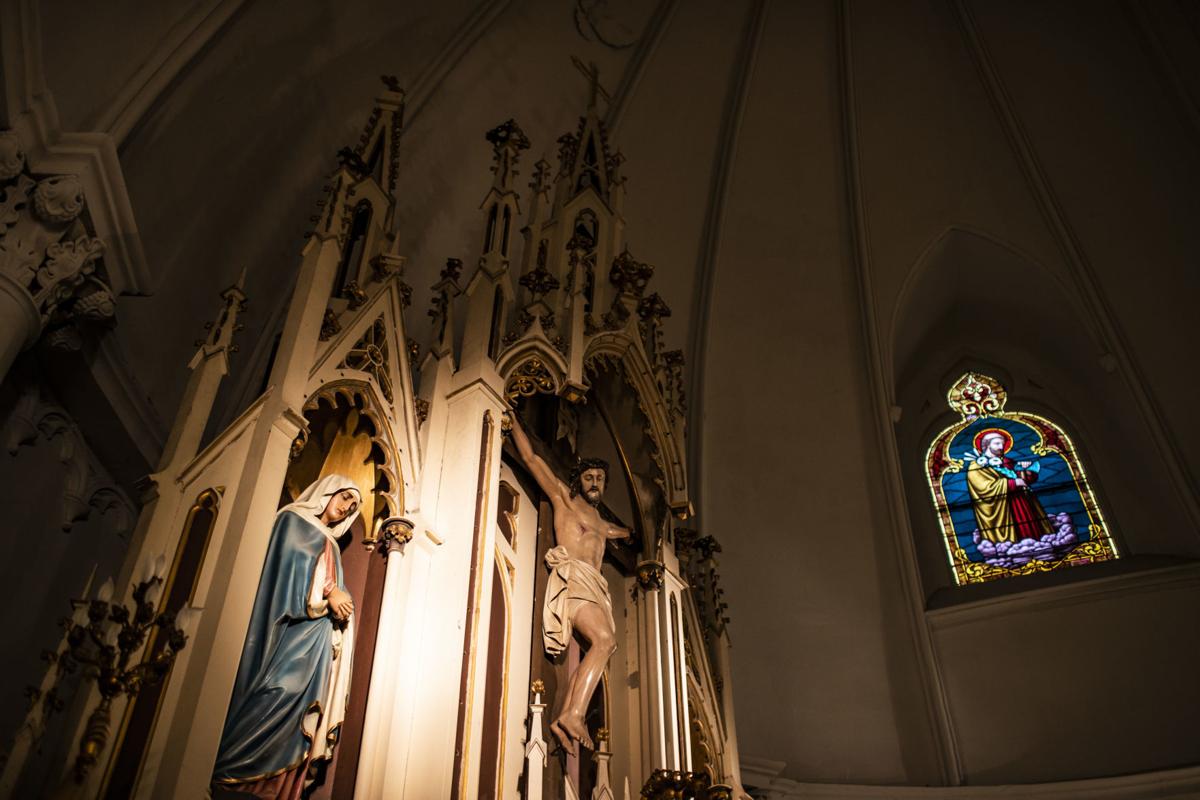 The area above the high altar will be painted with angels in St. Joseph Catholic Church. 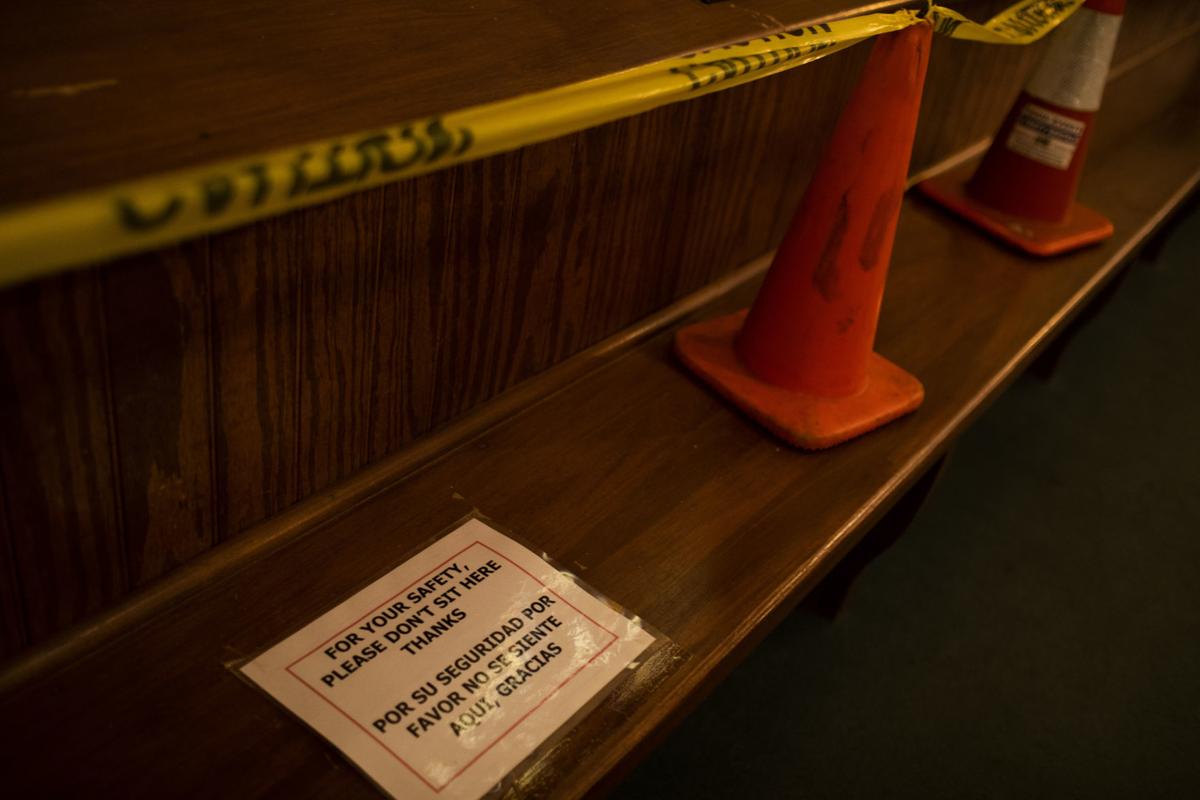 The area above the high altar will be painted with angels in St. Joseph Catholic Church.

Those who worship at Bowling Green’s St. Joseph Catholic Church are all too familiar with the peeling plaster, seeping water and discolored carpet that have endangered the future of a church building that dates back to 1889.

“I see the deterioration of the building and it makes me want to cry,” said Bonnie Gibson, a St. Joseph parishioner for more than 70 years.

Now parishioners such as Gibson, thanks largely to their own generosity, can feel confident that “St. Joe” does have a future – one that will pay homage to the church’s rich past.

After a capital campaign that raised more gifts and pledges than expected, St. Joseph leaders are ready for the start of a building project that is more restoration than renovation.

Estimated to cost up to $5 million, the project will restore the 434 Church Ave. building that is on the National Register of Historic Places to a state that is as close as possible to the 19th-century version.

“We asked our parishioners, and overwhelmingly they wanted it to go back to the original,” said Father Ryan Harpole, the church’s pastor. “We’re going to do that.”

Harpole, St. Joseph pastor since 2018, inherited the need to repair the decaying building, and he moved forward with a project that has been in the works since 2016. It will not only restore the building structurally but ensure that the artistry of its sanctuary area is preserved.

“The building is literally crumbling down around us,” Harpole said. “The people of St. Joseph love this building. It would be a shame to not restore it.”

Restoration was the goal of a capital campaign at the church called “Renew.”

“The goal was to renew our church and renew our faith,” said Bayne Million, president of the St. Joseph Finance Council that conducted the campaign.

The campaign’s ambitious goal was to come up with the money needed for a project that involves shoring up the building’s aging exterior and upgrading for handicapped access while preserving an interior beauty that includes stations of the cross statues imported from Germany more than a century ago.

The “Renew” campaign’s results were like an answered prayer for church leaders.

“The church has responded way beyond our expectations,” said Larry Conrad, a deacon at St. Joseph for the past two years.

Part of the Roman Catholic Diocese of Owensboro, St. Joseph exceeded the norms set by the west Kentucky organization of 78 parishes.

“The diocese has a formula based on your giving history to predict what you could raise in a campaign,” Million said. “Its estimate was $2 million, and we’ve raised over $4 million in gifts and pledges.”

Enough to bring in Nashville’s EOA Architects, a company with a track record of restoring historic buildings, and Bowling Green’s Scott, Murphy & Daniel, the construction firm that built both the St. Stephen Cathedral in Owensboro and Holy Spirit Catholic Church in Bowling Green.

“We’re looking forward to getting started,” said Joe Meyer, a vice president at Scott, Murphy & Daniel. “We have built several churches, but those were mostly new construction. With this one, we’ll kinda have to peel it off layer by layer. We’ll have to do it in phases.”

Meyer said his company will be working on the exterior for the next several months. He expects the total project to be completed by the end of 2021.

Scott, Murphy & Daniel’s building permit for the project is for $3.5 million, but extra touches on the interior to be completed by the Conrad Schmitt Studios architectural arts studio of Wisconsin will cost another $1 million or more.

The restoration will replace the aging carpet with wood floors, upgrade the confessional booths, enlarge the bathrooms and add handicapped access on a side entrance.

But the scope of the changes will be limited by the building’s historic nature.

“It’s a little bit of a challenge when you’re doing a historic preservation,” said Harpole, the pastor. “It has to look like it did in 1889.”

He explained that historic preservation regulations even cover such things as the type of mortar that can be used. Such attention to detail will be worth it for parishioners who treasure the history and beauty of St. Joseph.

“I think St. Joseph stands out because it’s such a historical place,” said Paul Warrell, a parishioner for 13 years. “It’s been around for so long that you can almost feel the tradition and the presence of Christ.”

The restoration, says Million, should ensure that the church’s history continues for decades to come.

Does the Vatican not own this property? My understanding is all Catholic churches are owned by Rome. The Roman Catholic Church is arguably the richest religious institution in the world. (Estimated north of 30 billion) Does the Vatican contribute nothing to this project? If they do indeed hold the title to the property why would parishioners be solely responsible for the restoration work? Does anyone know the answers to these questions?