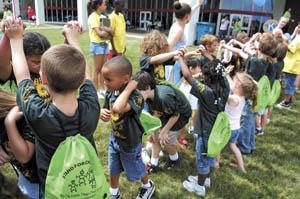 Children create a tunnel for others to file through Friday during Community Education’s 10th annual Stand for Children Day on Western Kentucky University’s South Lawn. 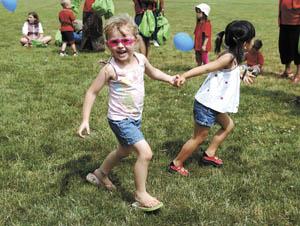 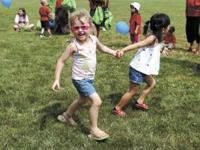 Four-year-olds Cassidy Farwick of Russellville and Anna Bryson of Bowling Green play Friday during the event. 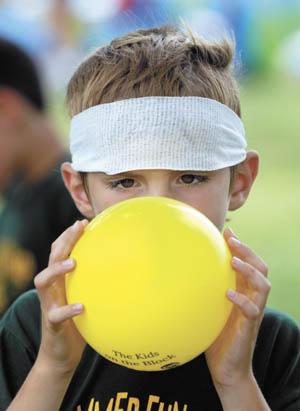 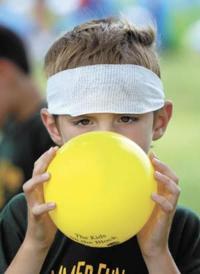 Seven-year-old Dallas Dugger of Bowling Green blows up a balloon Friday during Stand for Children Day at Western Kentucky University.

Children create a tunnel for others to file through Friday during Community Education’s 10th annual Stand for Children Day on Western Kentucky University’s South Lawn.

Four-year-olds Cassidy Farwick of Russellville and Anna Bryson of Bowling Green play Friday during the event.

Seven-year-old Dallas Dugger of Bowling Green blows up a balloon Friday during Stand for Children Day at Western Kentucky University.

Using oversized scissors, several kids gathered around to cut a red ribbon, signaling the start of Stand for Children Day.

At 9 a.m., children, parents and community leaders gathered on Western Kentucky University's South Lawn for the 10th annual event, which was dedicated to children.

&#8220We're full of energy,” said Ann Grubbs, enrichment coordinator for Community Education. &#8220We know how important kids are. They're the future. And every year there's more awareness, which is what it's all about.”

A theme generally accompanies Stand for Children Day, she said, but with this being the 10th year, they decided to let loose.

Music blasted from speakers as children and community education summer camp groups went from table to table, gathering information and goodies from vendors such as the ALIVE Center, American Bank & Trust - a sponsor of the event - and Bowling Green City Schools. The Medical Center was also present to promote its Healthy Kids Club.

&#8220We figured this was a good place to promote this,” said Heather Patterson with The Medical Center. &#8220Childhood obesity is growing. We need to start early and explain why it's important to eat healthy, and this is a great program to do that.”

The Bowling Green Kiwanis Club also co-sponsored the annual event, which has become routine for the club to do, said Greg Stevens, manager of the Wal-Mart on Veteran's Memorial Drive. Stevens, a member of the Kiwanis Club, said they participate every year.

The day's event included entertainment, prizes, games such as throwing a football through a hula hoop, and face painting.

Children walked around, playing several games. They also grabbed up balloons and bracelets from American Bank & Trust, faux tattoos from the ALIVE Center and juice from the school system.

While they got time to play around, they also got a chance to see the &#8220reading fairy” from the Public Library and dance the chicken dance and cha-cha slide - a staple at the event.

Although some were newbies to the event, others have been attending since the beginning. Tommy Hunt, a magistrate and former principal of Richardsville Elementary School, has been a part of the Community Ed event for the past 10 years.

&#8220I worked with youngsters for 33 years … they're the most valuable resource we have,” he said. &#8220Ann and her staff deserve a lot of credit for this. Anytime you can have something for youngsters is a plus.”