You have permission to edit this article.
Edit
Home
News
Obituaries
Sports
Opinion
Classifieds
Jobs
Digital Access
Who to Contact
Best of BG
Share This
1 of 5 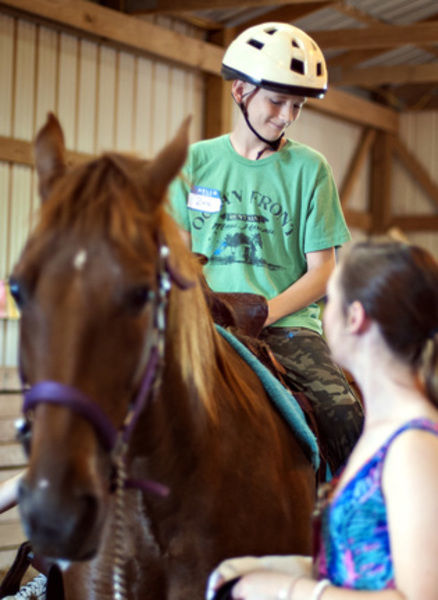 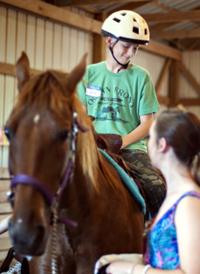 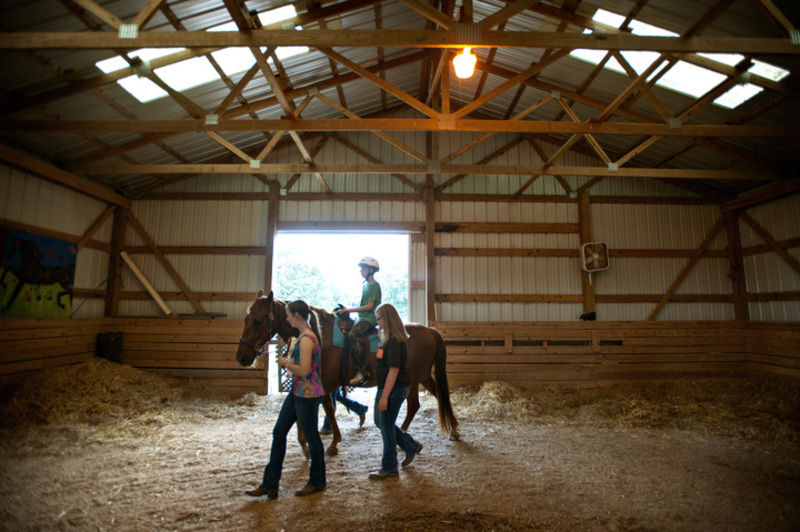 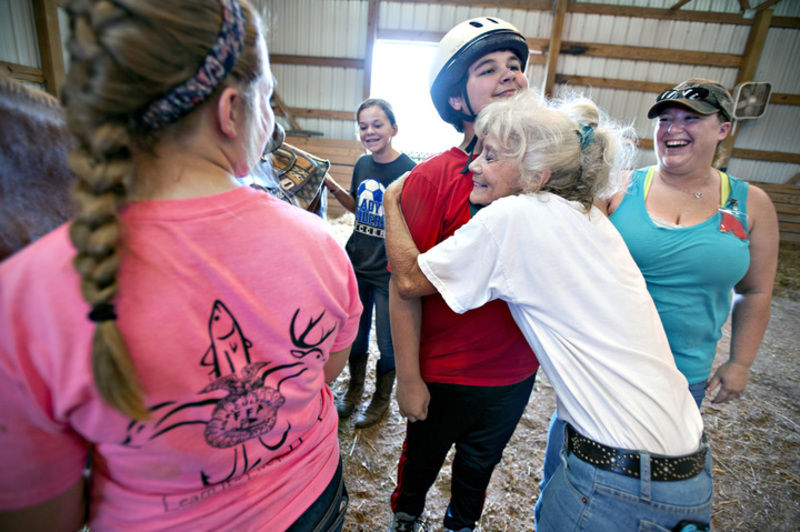 PHOTOS BY Miranda Pederson/photo@bgdailynews.com Kelly Autism Program student Ethan Burden (center), 14, of Morgantown, gets a hug from riding instructor Anne Newton after his ride with volunteers Anna Ray (clockwise from left), 15, and her sister, Ellie Ray, 16, both of Smiths Grove, and Victoria LaRue of Bowling Green at the Oakwood Farm Riding Academy. 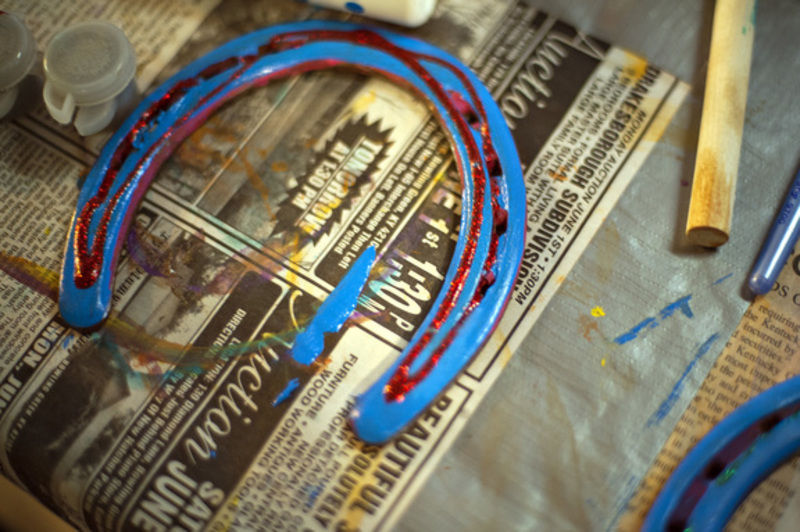 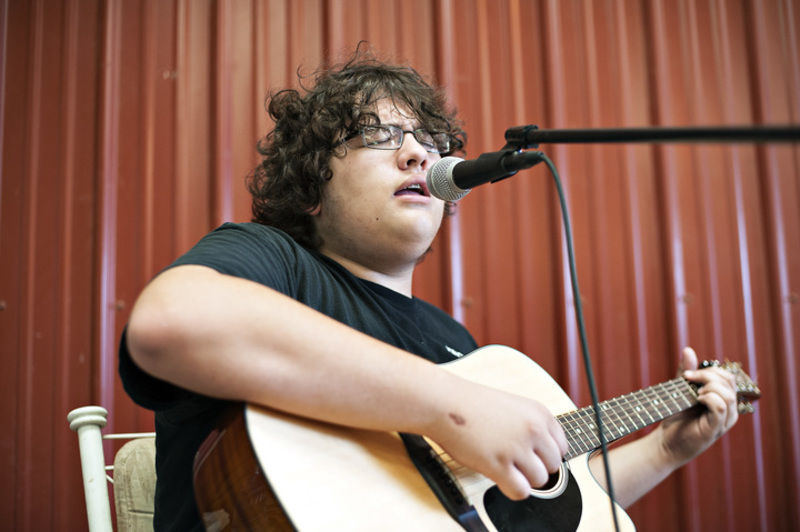 Music was performed by Jude Kingrey,1 7, of Glasgow on Thursday, June 11, 2015, at the Oakwood Farm Riding Academy. (Miranda Pederson/photo@bgdailynews.com)

PHOTOS BY Miranda Pederson/photo@bgdailynews.com Kelly Autism Program student Ethan Burden (center), 14, of Morgantown, gets a hug from riding instructor Anne Newton after his ride with volunteers Anna Ray (clockwise from left), 15, and her sister, Ellie Ray, 16, both of Smiths Grove, and Victoria LaRue of Bowling Green at the Oakwood Farm Riding Academy.

Music was performed by Jude Kingrey,1 7, of Glasgow on Thursday, June 11, 2015, at the Oakwood Farm Riding Academy. (Miranda Pederson/photo@bgdailynews.com)

Ethan Burden, 14, of Morgantown, was one of about 15 kids from Western Kentucky University’s Kelly Autism Program who rode and groomed horses, worked with arts and crafts, listened to live music and played games at a horseback riding academy Thursday.

“They’re awesome to ride,” said Ethan, who wanted to learn how to lasso.

Anne Newton of Oakwood Farms Riding Academy has hosted an annual event for children with autism for three years. In Newton’s experience, young people on the autism spectrum don’t have enough things to do for fun. The rocking motion kids experience while riding, which Newton compared to mother’s rocking their children to sleep, serves to calm children. For Newton, the kids she works with even seem to be able to communicate with her horses.

Newton may not be far off. Temple Grandin, a professor of animal sciences at Colorado State University who has autism, has said animals and people with autism think in a similar visual way.

“People with autism and animals both think by making visual associations,” Grandin said in a published research article. “These associations are like snapshots of events and tend to be very specific.”

Grandin will speak at the Bob Kirby Branch of the Warren County Public Library at 6 p.m. Nov. 9.

Stephanie Menser, a volunteer who looks after the kids ranging from middle school to employment age, said the kids have helped her put her problems in perspective.

“Some of these kids have a lot to overcome and they do it everyday,” said Menser, who has volunteered at the Kelly Autism Program for over a year.

Along with riding inside a barn with the help of Newton and other volunteers, participants had the opportunity to paint and decorate horseshoes with volunteer Judy Smith.

Smith, who has volunteered at the event along with her brothers, Bob and Doug Hovious, for two years, said the variety of activities gives the kids a lot of different ways to express themselves.

Children gathered around other stations in the barn, such as one for grooming horses with brushes, and outside where they volleyed a birdie back and forth with badminton rackets. Regardless of how participants decided to enjoy the warm summer morning, the soothing voice of 17-year-old Jude Kingrey, of local band Steel N’ Horses, could be heard. Kingrey, who also strummed an acoustic guitar, performed numerous songs, including “Wagon Wheel” and “House of the Rising Sun.”

Donald Auge, Kingrey’s stepfather, said his stepson is a humble young man with a bright future in music. Kingery’s band plays at Doug’s Motor City Bar and Grill on Saturday.

Auge said Kingrey has a brother named Adam who has high-functioning autism. Auge said his stepson is able to live alone in his own apartment with state assistance. Auge said his stepson’s autism is hard for others to see right away because he exhibits only a few personality quirks, such as not being comfortable around large crowds. Auge said Adam Kingrey was independent enough to get his own driver’s license.

“I was really impressed with that,” he said.

Menser has seen kids progress after getting on a horse. The experience, she said, gives them the courage to do things they never thought they could.