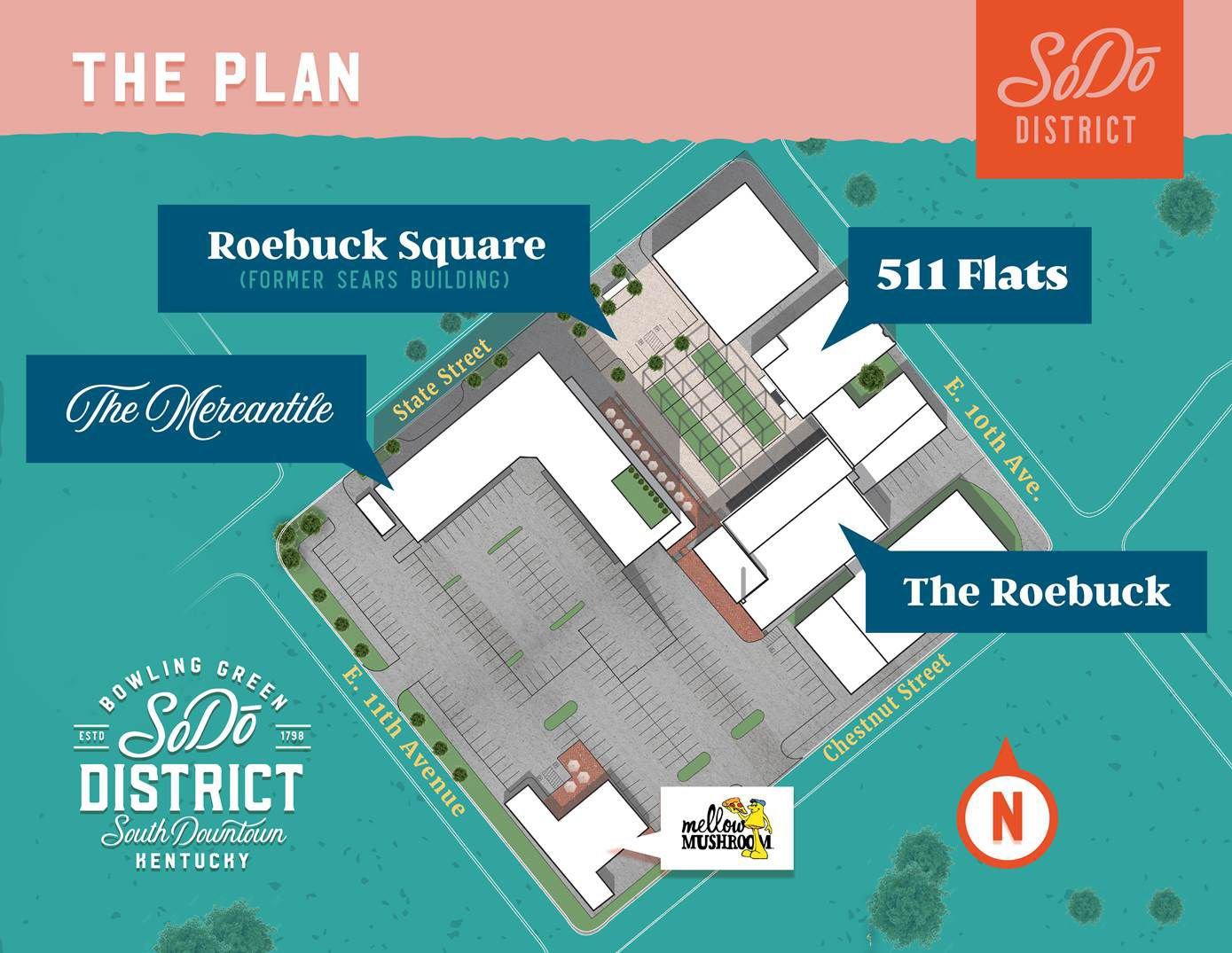 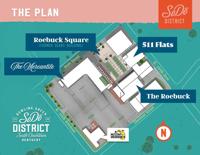 This map shows the projects that are part of the SoDō District. 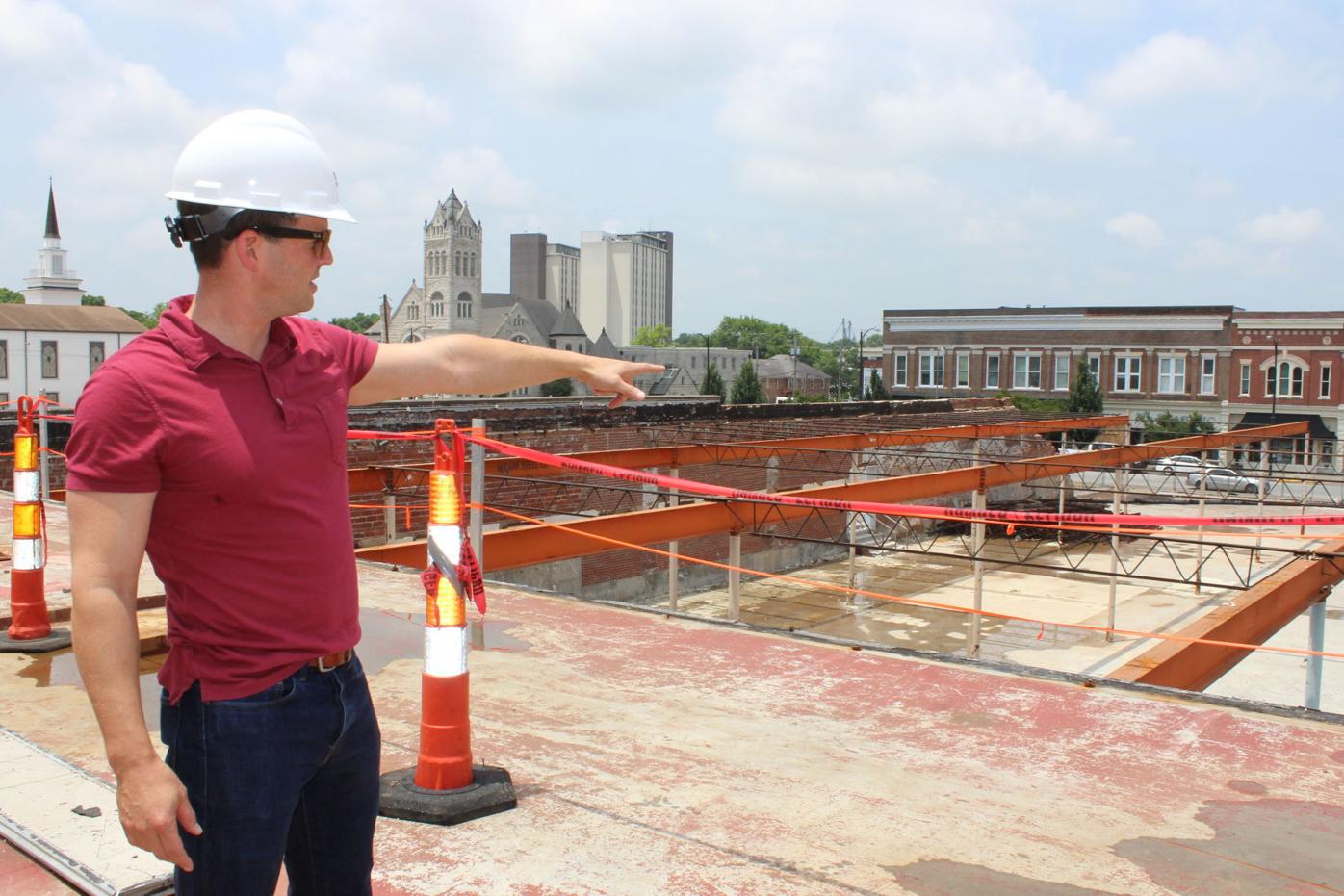 SoDō District developer Greg Foster stands Friday on the roof of the former Sears Roebuck store on State Street in Bowling Green. The front portion of the building has been torn down to make way for Roebuck Square, a public park space, while the rest of the building is being converted into apartments as part of the larger SoDō District development.

This map shows the projects that are part of the SoDō District.

SoDō District developer Greg Foster stands Friday on the roof of the former Sears Roebuck store on State Street in Bowling Green. The front portion of the building has been torn down to make way for Roebuck Square, a public park space, while the rest of the building is being converted into apartments as part of the larger SoDō District development.

A new mixed-use development with plenty of nods to the area’s history and featuring more than 100 apartments, a park and retail space is planned for downtown Bowling Green.

The roughly 40,000-square-foot development has been dubbed the SoDō District, short for South Downtown, and is centered on the former Sears and Roebuck store at 1010 State St., which last served as the Kentucky social services building.

“It’s exciting to see another downtown property being redeveloped,” Bowling Green Mayor Bruce Wilkerson said of the SoDō project. “The downtown is continuing to grow.”

Developer Greg Foster and his partners have started work on the project with demolition of the front part of the old Sears store, which will be dubbed Roebuck Square and serve as an open-air plaza-like park. The back of the former Sears building is being converted into retail space on the ground floor facing the square with apartments on the upper floor and is being called The Roebuck.

The Mercantile building will be built on adjacent land currently used as a parking lot and will front State Street. The five-story building will also feature commercial space on the ground floor, about 60 apartments on the upper floors and a rooftop plaza overlooking Roebuck Square and the downtown area that will be available for rent.

Old maps of the area show that the location once was the city’s “Mercantile District” and included shops, a livery and hotel, among other businesses.

Between The Mercantile building and Roebuck Square will be a terraced ramp allowing access to both spaces.

Foster said the project started when he was looking for office space for INKED – a Bowling Green company that provides e-commerce services for social media influencers, of which he is an owner. While he didn’t find suitable space for INKED, he saw the potential for a bigger mixed-use development in the area.

“It’s taken a life of its own,” he said. “A lot of thought has gone into the vision.”

The property Foster and his partners, operating under the name TinTin Properties, purchased includes the old Sears and Roebuck automotive services building which is now the Mellow Mushroom restaurant, which will remain.

TinTin properties also owns the building at 511 10th Ave. that backs up to Roebuck Square. The building is being renovated for commercial space on the ground floor and more apartments above and is being dubbed 511 Flats. Thursday, TinTin closed on the purchase of the Armory Lofts building at the corner of 10th Avenue and Chestnut Street, which will also be incorporated into the project.

The steel roof girders from the old Sears building, which dates to 1960, will remain as part of the plaza, as will much of the terrazzo that once was the store’s floor and which Foster remembers from his childhood visits to the Sears store. Terrazzo is a conglomerate of polished materials set in concrete, which will be retained because of its durability and its aesthetics. Foster said during demolition of the building he was overjoyed to find 33,000 square feet of terrazzo under newer flooring.

Segments of grass will be added between the terrazzo, and at the front of the square a forecourt area will be set aside to allow for special events or food trucks.

Foster envisions the space as a “buzz-generator. We’re looking to bring energy and activity to the downtown as a whole,” he said.

Foster said old porcelain light fixtures were also found during demolition tucked above ceiling tiles and will be reused in the development, as will brick walls and other historic elements.

The apartments will be a mix of sizes with balconies and have a modern yet Southern feel, Foster said. Rents, commercial tenants and the entire cost of the SoDō project have not been set, he said. The development is not in the downtown Tax Increment Financing District.

While some parking will be lost with construction of The Mercantile building, Foster said some reconfiguring of the lot will make for better flow and additional spaces.

Several other residential developments are also in the works for the downtown area, but Foster said he doesn’t think there will be a glut of downtown housing anytime soon.

“I think there was a pent-up demand,” he said.

The project will be done in phases, with Roebuck Square, 511 Flats and The Roebuck slated for completion this fall with work on The Mercantile following.

– More information about the project is available at www.SoDoBG.com.