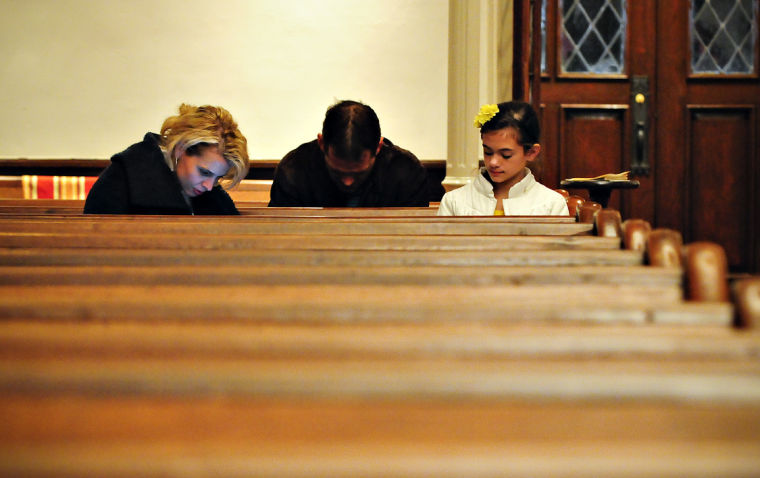 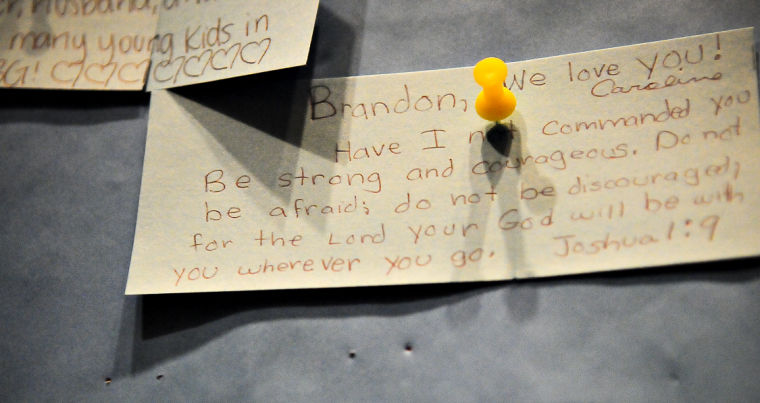 Prayer cards for Brandon Bradshaw are posted on a board Wednesday, Feb. 27, 2013, at the Presbyterian Church. (Photo by Miranda Pederson/Daily News)

Prayer cards for Brandon Bradshaw are posted on a board Wednesday, Feb. 27, 2013, at the Presbyterian Church. (Photo by Miranda Pederson/Daily News)

Each man is a father to three sons, and acquaintances say Tommy Brown and Brandon Bradshaw are loving husbands, caring friends and are well-liked in the community.

Their lives intersected Tuesday afternoon in a parking lot when shots were fired, throwing those lives into turmoil. Bradshaw is fighting for his life at Vanderbilt University Medical Center in Nashville and Brown awaits the outcome of a police investigation.

Friends say Bradshaw had the flu that day and was on his way to Walgreens on the bypass to get some medicine. The shooting occurred less than a block from the pharmacy.

Investigators have released little information about the incident or about the events that preceded the shooting. They have declined to say whether Bradshaw was armed.

“Mr. Brown acted lawfully and in self-defense,” Simpson said. “He didn’t want to have to use his weapon.”

Simpson declined to comment on whether Bradshaw was armed at the time of the shooting. Simpson said he believes evidence revealed at the end of the police investigation will show that Brown’s actions were legally justified. “Everybody needs to reserve judgment until the investigation is complete,” Simpson said, adding that the events have been tragic for both families.

“The Brown family is praying for the Bradshaw family,” Simpson said.

Warren County Sheriff Jerry “Peanuts” Gaines said he’s known Brown since he was a boy, describing him as a man with a good personality who gets along with everybody.

“He has been involved in Little League baseball here for his whole adult life,” said Warren County Sheriff’s Maj. Tommy Smith, adding that three of his sons grew up playing baseball.

“I’ve never seen him mad or nothing,” Gaines said. “He just gets along good with people.”

Family and friends of Bradshaw have held prayer services on his behalf since the shooting. One was Wednesday night at The Presbyterian Church, 1003 State St., where friends and children involved in youth theater at the Southern Kentucky Performing Arts Center prayed for him and reminisced about good times.

“When there was a hole in my roof, he climbed up there and patched it for me,” said Andee Rudloff, who works with Bradshaw at SKyPAC. “He’d just do anything for anybody.”

Walter E. York, a close friend of Brown’s who has known him for years and has worked with him in customer service at Bowling Green Municipal Utilities, said he was shocked when he learned his friend had shot someone.

“He’s normally very compassionate, so I don’t know if this was road rage – I don’t know,” York said. “I can only tell you about the man that I’ve worked with – there was several instances when I would see customers get very upset ... and Tommy always held his composure.”

Brown, a father to three sons, has been married to his wife, Mindy, for more than 30 years, York said.

“My prayers have been both for the gentleman that’s been injured and Tommy,” York said.

“There’s a firearm simulator ... we have that here once or twice a year,” Smith said. “It puts the officer in a real-life scenario of a shoot, no-shoot scenario and prepares them.”

Bradshaw, also a father to three sons – his youngest, Connor, was born last week – is in critical condition at Vanderbilt, according to a Facebook post written by his dad, Troy Bradshaw.

Brandon Bradshaw, who was shot three times – once in his ear and neck and twice in his arm – has experienced swelling of his brain and is unresponsive, according to Troy Bradshaw.

“(Tuesday) night when we got to Vanderbilt, there was about 70 people here,” Troy Bradshaw told the Daily News on Wednesday. “We’re not surprised, we know what an impact he has had on the community.”

At about 10 a.m. today, Troy Bradshaw wrote on Facebook that the news is “not good,” and that Brandon Bradshaw’s heart had temporarily stopped beating. Doctors were not certain for how long it had stopped. Troy Bradshaw wrote that the family remains hopeful, but that doctors said “the chances that Brandon will ever leave Vanderbilt are very slim.”

A Brandon Bradshaw Recovery Fund has been set up at PNC Bank to help with medical expenses and to aid his wife and children with necessities, Troy Bradshaw said.

Donations to the Brandon Bradshaw Recovery Fund may be made at any PNC branch in Bowling Green.

Everybody needs to just sit back, shutup and let our two tiered justice system do its job.

elvis, don't hold your breath waiting for your questions to be answered. That "wait on the investigation" is gov. speak for we're not going to tell you. Simpson said, on thursday"s WBKO news he had the facts and knew the truth. If Mr. was allowed to leave the scene, that would seem to be preferential treatment. I wonder, like you, was he taken to police headquarters, tested ,and subject to an extended "interview".

“Everybody needs to reserve judgment until the investigation is complete,” Simpson said, adding that the events have been tragic for both families."

I agree with the respect for families and praying for them but I do have questions.

Granted I was not there. I don't know anything except what I hear on the news and read in the papers. That said I don't understand how two men can get into a gun fight in broad daylight and one was not able to leave and the other one left the scene.

According to the news Mr. Brown left the scene of the shooting. I don't know either man involved but I am wondering out loud if Mr. Brown even was read his rights, taken to jail or given any blood tests looking for drugs or alcohol in his system.

All the press reported was that Mr. Brown has been placed on leave. Paid or not paid leave I don't know.

I will ask for anyone to explain to me how you can be involved in a shoot out, leave the scene and not be in jail ? I'm gonna guess that 99.9 percent of the rest of us would have been drug out of our homes by a S.W.A.T. team.

There are enough accusations,here say and innuendo floating around and I'm not taking sides or trying to stir the pot. I am however a Voter / Taxpayer who is curious and looking forward to further explanation of just what happened.

just can't buy the "legally justified/self defense" claim. Mr. Brown is the one who got out of his vehicle to confront Mr. Bradshaw,and it wasn't to say: hey brandon long time no see, good to see you: or something like that. definately an offensive gesture.