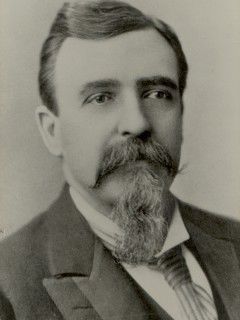 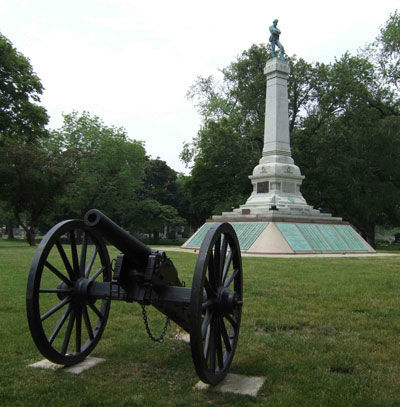 The Oak Woods Cemetery Confederate monument in Chicago marks the burial spot of perhaps as many as 6,000 Confederate soldiers.

The Oak Woods Cemetery Confederate monument in Chicago marks the burial spot of perhaps as many as 6,000 Confederate soldiers.

The role of Confederate monuments in public spaces is again the source of intense debate. In the history of such memorials, a prominent early Bowling Green leader – John Cox Underwood – was a key, even if now largely forgotten, figure.

Locally, Underwood is best known as Bowling Green’s second mayor, serving from 1871 to 1872. An engineer when he fought for the Confederacy in the Civil War, Underwood spearheaded the effort to build Fountain Square Park during his term. The land was the site of the county courthouse at the time, but Underwood purchased the two acres from the county for $8,000. The new county courthouse was built at its current location, and Fountain Square Park was designated to forever be a public space.

Despite that and other accomplishments, including being a former lieutenant governor of Kentucky, Underwood hardly comes quickly to mind for many. Bowling Green historian Ray Buckberry said that if you ask most people in Bowling Green their thoughts on John Cox Underwood, “I don’t think you would get much response,” he said.

Still, Underwood’s role in establishing a unique Confederate monument in Chicago was the subject of a recent presentation at the University of Chicago.

In Chicago’s Oak Woods Cemetery, there is what is claimed to be the largest mass burial site in the Western Hemisphere. A 30-foot granite monument, topped with a bronze statue of a Confederate soldier, stands atop the remains of perhaps as many as 6,000 Confederate troops who died at the Union’s nearby Camp Douglas prison during the Civil War.

At the dedication for what came to be known as Confederate Mound on May 30, 1895, President Grover Cleveland and an estimated 100,000 spectators were on hand.

The University of Chicago history student who presented on Confederate Mound, Jarrett Shapiro, said his research was based on a simple question: How did a Confederate monument come to be built in the heart of the Union?

When he discovered the man behind the monument was Underwood, Shapiro admits, “I didn’t know who he was.”

What he found was that Underwood, an active leader of Confederate veterans groups, was one of the primary national advocates at the time for a form of reconciliation between the North and South.

The monument’s dedication was the culmination of several years of work by Underwood to promote reconciliation through efforts such as large joint public gatherings of Union and Confederate veterans, held mostly in Union states to a mixed reception.

The effort for reconciliation between North and South was a growing movement at the time, with Underwood being one of its most notable proponents.

But Underwood, Shapiro said, took advantage of the reconciliation movement to also defend a version of the “Lost Cause” – the notion that the Civil War was fought not over slavery, but rather state’s rights.

Underwood wrote at the time regarding slavery that “it is not now profitable to discuss the right and wrong of the past, which has been settled by arbitrament of arms, neither should the question be raised as to the morals of Massachusetts selling her slaves and South Carolina holding hers.”

To skirt the issue of slavery, Underwood framed reconciliation through tributes to “the common valor of the soldier,” Shapiro said, such as Confederate Mound. “I think that’s what he would like his legacy to be,” Shapiro said.

Buckberry noted that Underwood was in a unique position in the reconciliation movement. He was a prisoner of war for more than a year when captured by Union troops in Tennessee, but was pardoned by President Abraham Lincoln himself, thanks to the intervention of family members who were staunch Unionists.

By framing the Oak Woods monument in terms of honoring fallen soldiers, Underwood was able to garner what would seem unlikely support: The vast majority of the $25,000 cost of the monument was donated by Northerners, and a dedication dinner for the monument drew numerous local dignitaries to a swank Chicago hotel. The hotel is near the building where, 35 years earlier, Lincoln won the Republican nomination for president.

Confederate Mound was seen by some at the time as evidence that reconciliation was at hand.

An 1896 Baltimore Sun article on a national reunion of Confederates in Richmond, Va., noted that a resolution was passed that year thanking Chicago for a “broad-minded liberality of its people,” for allowing the monument to be built. One speaker said, “On May 30, 1895, was noted the firing of the last shot in the struggle between the States and the inauguration of the modern civilization.”

According to the Make it Right Project website, “The (monument) towers over the graves of several notable African Americans, including journalist and anti-lynching activist Ida B. Wells, who was born into African-American chattel slavery – the dehumanizing system that Confederates honored by this statue fought to preserve.”

“I think he would be awfully upset,” about any efforts to remove the monument, Buckberry said. “He was firm and unflinching” in his belief in the Southern cause while also seeking to facilitate reconciliation between North and South.

For now, the monument stands, in part a testament to Underwood himself.

“When I look at the monument, I see a man who was very clever,” Shapiro said.