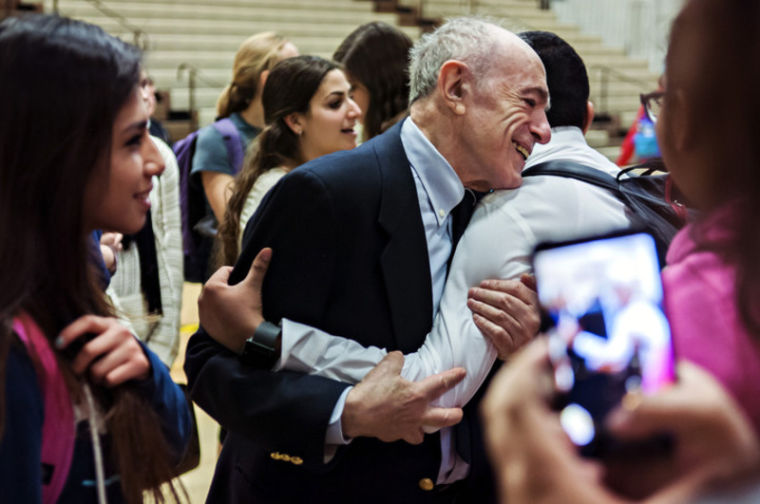 Samuel Marder hugs one of many Greenwood High School students that came up to him after his talk Thursday. 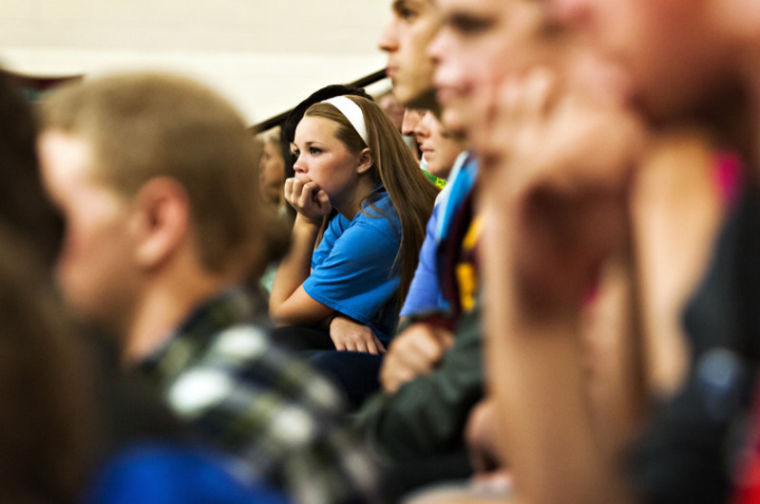 Cassie Meador, 16, listens as Samuel Marder speaks to Greenwood High School students, Thursday, Oct. 17, 2013, about his experience as a 10-year-old in a Nazi concentration camp during WWII and how he believes kindness will contribute to ending prejudice and hate. (Miranda Pederson/Daily News) 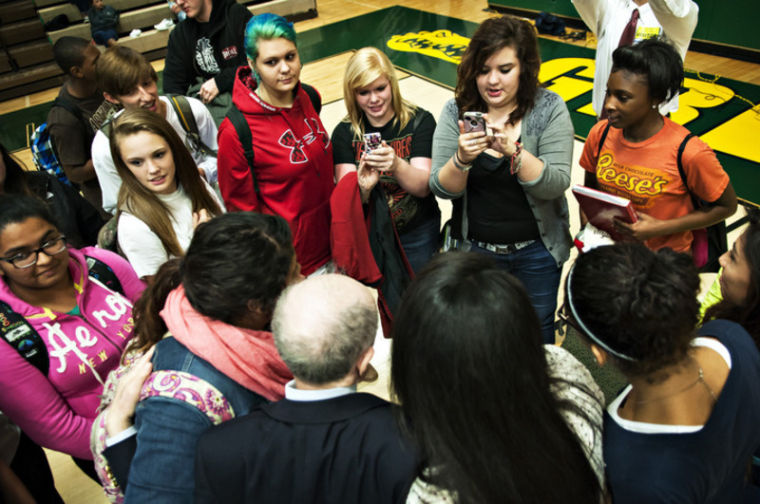 Samuel Marder speaks to Greenwood High School students, Thursday, Oct. 17, 2013, about his experience as a 10-year-old in a Nazi concentration camp during WWII and how he believes kindness will contribute to ending prejudice and hate. (Miranda Pederson/Daily News)

Samuel Marder speaks to Greenwood High School students Thursday about his experience as a 10-year-old in a Nazi concentration camp during World War II and how he believes kindness will contribute to ending prejudice and hate. Photos by Miranda Pederson/Daily News

Samuel Marder hugs one of many Greenwood High School students that came up to him after his talk Thursday.

Cassie Meador, 16, listens as Samuel Marder speaks to Greenwood High School students, Thursday, Oct. 17, 2013, about his experience as a 10-year-old in a Nazi concentration camp during WWII and how he believes kindness will contribute to ending prejudice and hate. (Miranda Pederson/Daily News)

Samuel Marder speaks to Greenwood High School students, Thursday, Oct. 17, 2013, about his experience as a 10-year-old in a Nazi concentration camp during WWII and how he believes kindness will contribute to ending prejudice and hate. (Miranda Pederson/Daily News)

Overcome with sickness, grieving his dead father on the floor next to him, 10-year-old Samuel Marder slipped off into unconsciousness in the World War II concentration camp. He was ready to die.

Marder, 83, of New York City, recalled these memories for a hushed and filled gymnasium at Greenwood High School on Thursday afternoon. He said that in an ensuing dream while in a coma, his father fed him and told him everything would be all right.

When the food touched his lips in the dream, he woke up. “I decided to fight for my life,” Marder said.

He would spend three and a half years in the Ukraine-area concentration camp before eventually being freed and then coming to America. Marder has written “Devils Among Angels: A Journey from Paradise and Hell to Life.” There are no visible signs today that the concentration camp even existed, he told the students.

“It was erased to the ground.”

Marder said he’s spent the past decade speaking to young people about the dangers of prejudice.

“They can change their world and their surroundings if they understand,” Marder said prior to his talk.

He told the GHS students he was in fear for his life, at times, minute by minute, while in the camp. However, when he later had the opportunity to walk by the dead bodies of Nazi soldiers who had been his captors, he could not bring himself to hate them.

“My father taught me not to hate,” he said.

Marder came to GHS on Thursday, one of his two appearances in Bowling Green, through GHS senior Gabriela Cipolla’s efforts and others, she said. The senior, along with fellow GHS seniors MacKenzie Goff and Hira Arshad, are working on the “Reach for Tolerance” project at the high school, an effort to heighten awareness of prejudice. Cipolla’s father, John, plays clarinet with Marder, who is a violinist. Cipolla is an associate professor of music at Western Kentucky University. Efforts to bring Marder to Bowling Green started in May, Gabriela Cipolla said.

When Marder was brought to the concentration camp Transnistria (Ukraine), “my normal childhood stopped. I did not know if I would be alive the next day,” he said.

The Nazis, under Adolf Hitler, displaced hundreds of thousands of Jews from their homes, transporting them in rail cars to concentration camps, where they were exterminated. Hitler, who committed suicide before the Germans surrendered to the Allied forces, had a deep-seated hatred of the Jewish residents. “I don’t understand how any human being can be capable of such things,” Marder said, calling Hitler “a madman.”

When he first slept on a bed after years without one, he ended up on the floor, Marder said. “I forgot how to live a normal life.”

As dangerous as the world was when Marder was a youth as Hitler issued marching orders for the Jews’ extermination, he told the students that modern day is even more dangerous, where one bomb can result in a nation being wiped out. He said the young people have to judge for themselves the merit of comments and actions of others.

Marder said children are not born with prejudice but acquire it later. “The child absorbs the poison in their minds,” he said.

The students gave Marder a lengthy standing ovation at the end of his comments.

Cipolla said “Reach for Tolerance” is still in formation.

“We’ve been trying for a long time to start this,” she said.

“I’m a strong believer in equality for everyone,” Goff said, adding that students who may say things that express a religious or racial intolerance often aren’t aware of “just how deeply (those comments) affect people.”

Arshad said it becomes a process of education. “It’s foreign to them,” she said, such as when a Muslim woman wears a traditional scarf and a commenter doesn’t understand the significance.

Goff and Cipolla agreed there’s no concerted effort by students to be religiously or racially intolerant at GHS. “No one in the schools is trying to be offensive,” Cipolla said.

“That is why I am here. This is the most important thing I have done in my life,” Marder said before his talk.

Jennifer Gann, a junior at GHS, said Marder’s comments were interesting. She said after the program that she had read about Anne Frank, the young Jewish girl who hid from the Germans for two years and chronicled her struggles in a diary. Anne Frank died in a concentration camp, and the diary was published after her death. Other aspects of the Holocaust during World War II that Marder talked about Thursday were new information for Gann, who plans on learning more about the horrific saga.