"Every organization I've worked with has a trap and release program whether it's one location or several volunteers," said humane society operations manager Ashley Reum. "They typically have a successful program. When I got to Logan County I asked, 'what kind of program do we have for feral cats?'"

In the program, feral cats are captured in cages that volunteers set the night before. Volunteers check the traps and then take the cats to a veterinary clinic to be spayed/neutered.

"When the cats are spayed or neutered, the tip of the ear will be cut off or tattooed because if they are caught again, no resources will be lost," Reum said. "It does not cause pain. It's done while they're under the spay/neuter procedure."

The cat stays at the humane society overnight.

"We have a rest area for them to stay overnight," Reum said. "A volunteer brings them back to where we trapped them the next morning."

"Everything is donated. The veterinarian is donating time, materials and surgery. We provide the traps, newspapers to line the vehicle and sheets to cover the cats," she said. "It's best to cover them so they can stay calm."

Dr. Jon Todd of Logan County Animal Clinic is providing services for the trap and release program. He hopes other veterinarians volunteer.

"We did that about three or four years ago. We were having a problem in downtown Russellville just south of the square," he said. "We were having a huge number of feral cats, and people were feeding them and they were generating like crazy. I mentioned to (the humane society) about a week ago that we'd probably ought to do it again. Big cities do it all the time."

"All the clinics participated to some degree. We did right at 80 cats," he said. "Then they would be released close to the place where they were picked up."

Cats are in heat every four to seven days, Todd said.

"That's why the population increases so fast," he said. "It's important, especially in cities were there are a lot of feral cats, for people to be involved," he said. "They're usually going to get pregnant twice a year."

Getting the cats spayed/neuter not only cuts down the overpopulation, but it also slashes the incidence of diseases such as feline immunodeficiency virus, chlamydia and herpes and fighting, Reum said.

Friendly cats could be caught in the cages.

"If it's friendly or a young kitten, we would put them in the adoption program to find a new home," she said. "We would hold them for five days for the owner to have a chance to reclaim them. If they are not reclaimed, we go about the regular adoption process for the cat."

Stray cats might be born in a household where they were socialized with people and other animals, Reum said. Feral cats are not domesticated and are used to living with wildlife.

"They've been through generations of not being socialized. They're terrified of people. It's not their fault they're wild animals," she said. "It's easy to identify. Respirations are going to be higher. They're panting because of the stress of being in the cage. Their eyes are dilated. They're trying to get out of the trap. They're meowing because they're being contained."

If Reum doesn't get enough volunteers, she's going to have to appoint a staff member to put the traps out Tuesday evening and check them Wednesday morning when the shelter is closed. The employee wouldn't get extra pay. Reum hopes volunteers come out instead.

"Our goal is to have volunteers on a daily basis. They're not only helping animals, but they're saving property damage to citizens of the community because of feral cats," she said. "We're providing everything. We just need the manpower. Even if we trap one cat per week it's going to help."

— For more information about the shelter or to volunteer, call the shelter at 270-726-2186, email adoptlcpets@gmail.com or visit the shelter's Facebook page. 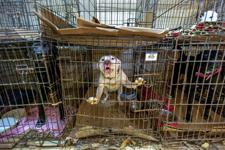 In April 2015, after the Logan County Humane Society shelter was found to be overcrowded and in poor shape with a rodent infestation, animals …