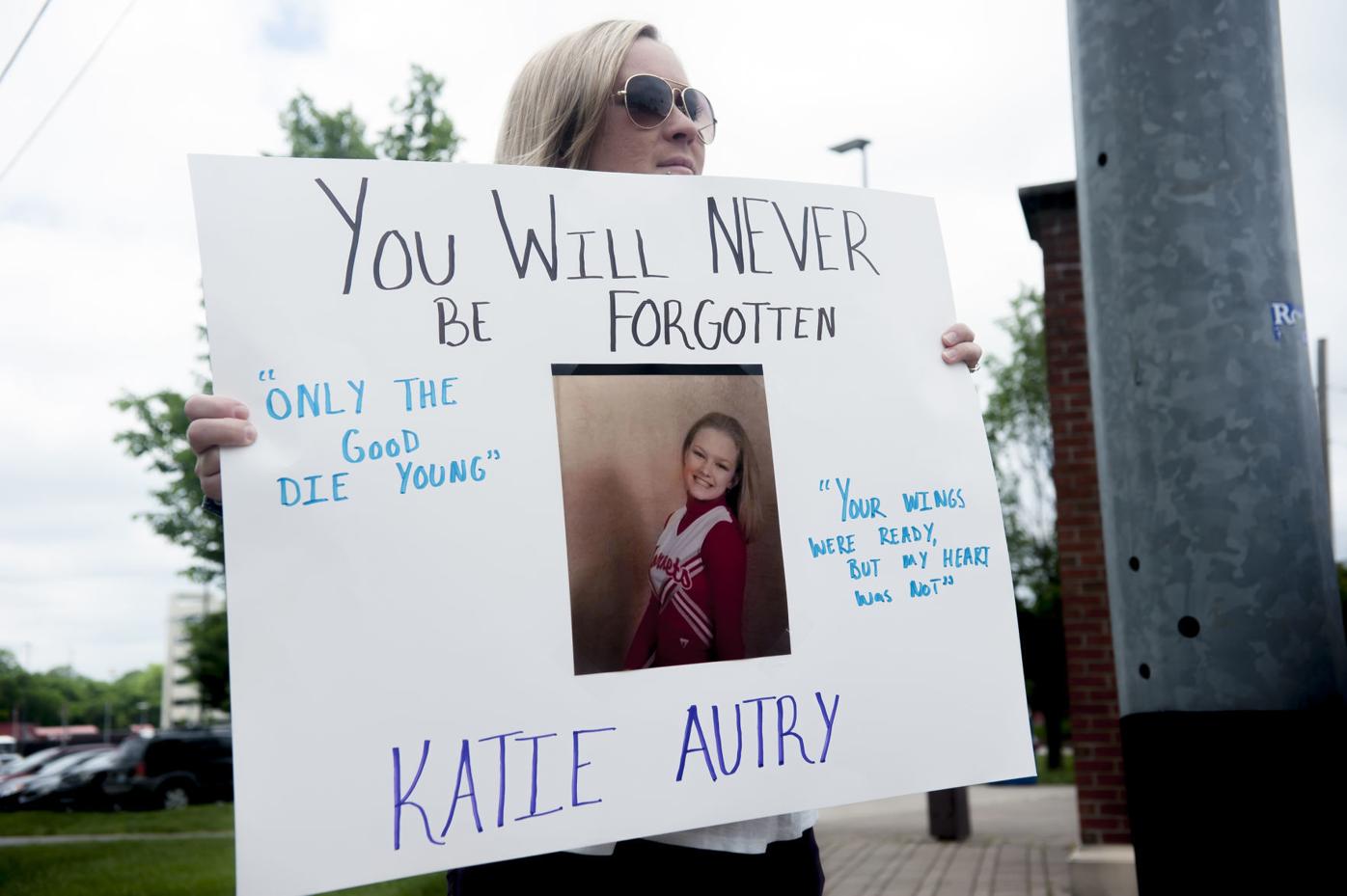 Brittney Chapman holds a sign Sunday, May 5, 2019, to commemorate Katie Autry at the intersection of University Drive and Russellville Road. (Bac Totrong/photo@bgdailynews.com) 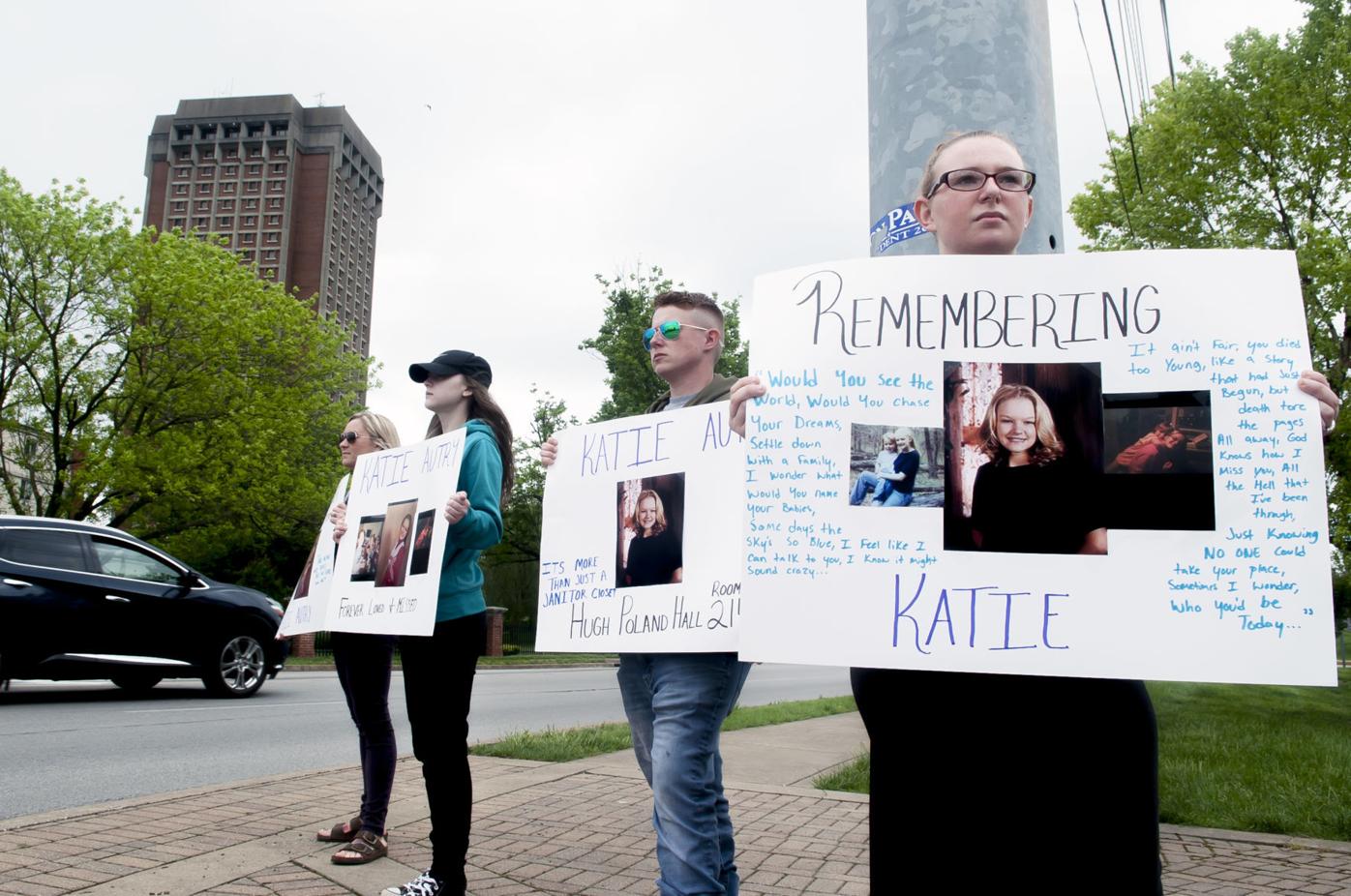 Brittney Chapman holds a sign Sunday, May 5, 2019, to commemorate Katie Autry at the intersection of University Drive and Russellville Road. (Bac Totrong/photo@bgdailynews.com)

Sixteen years after her death, the loved ones of Melissa “Katie” Autry gathered Sunday at Western Kentucky University to honor her memory and raise awareness of her life and her tragic end.

Four relatives and family friends stood at Russellville Road and University Boulevard, holding signs with pictures of Autry from throughout her life.

Autry was an 18-year-old WKU student from Pellville when she was raped, stabbed and set on fire in her dorm room in Hugh Poland Hall on May 4, 2003.

She died May 7, 2003, from her injuries at Vanderbilt University Medical Center in Nashville.

“We want to make sure that people don’t forget,” said Johnni White, Autry’s cousin. “I feel like if something so bad happened to someone, people should take a moment to remember her, no matter what you’re doing.”

Two men, Stephen Soules and Lucas Goodrum, were suspected of causing her death and arrested on several criminal counts.

Soules pleaded guilty and is serving a life sentence without parole, while a jury acquitted Goodrum of all charges.

When Autry’s name registers in the public, it is often as the victim of a brutal attack in her dorm room.

White, though, remembers her as someone who made time for her family.

“She was my favorite older cousin,” said White, who lives in Glasgow. “She would stop what she was doing to come play with me. ... She loved her family for sure.”

White said a few students paused to ask about their gathering and about Autry, and some were familiar with what happened 16 years ago.

The family has struggled under the emotional weight of dealing with Autry’s death.

“Her room just got turned into a janitor’s closet,” White said. “I feel that’s not very respectful.”

Autry’s estate filed a wrongful death lawsuit that led to a $200,000 judgment from the Kentucky Board of Claims.

White said family members will often visit Autry’s gravesite as a way of coping with their loss.

“It feels like she should have a memorial plaque somewhere,” said family friend Brittney Chapman of Morgantown.

Chapman held a sign with a picture of Autry in her high school cheerleading uniform, surrounded by the messages “Only the good die young” and “Your wings were ready, but my heart was not.”

White said the group is considering returning Monday or Tuesday.

VIDEO: Loved ones remember Katie Autry 16 years after her murder

Friends and family of Katie Autry gathered to commemorate her near Western Kentucky University on Sunday.