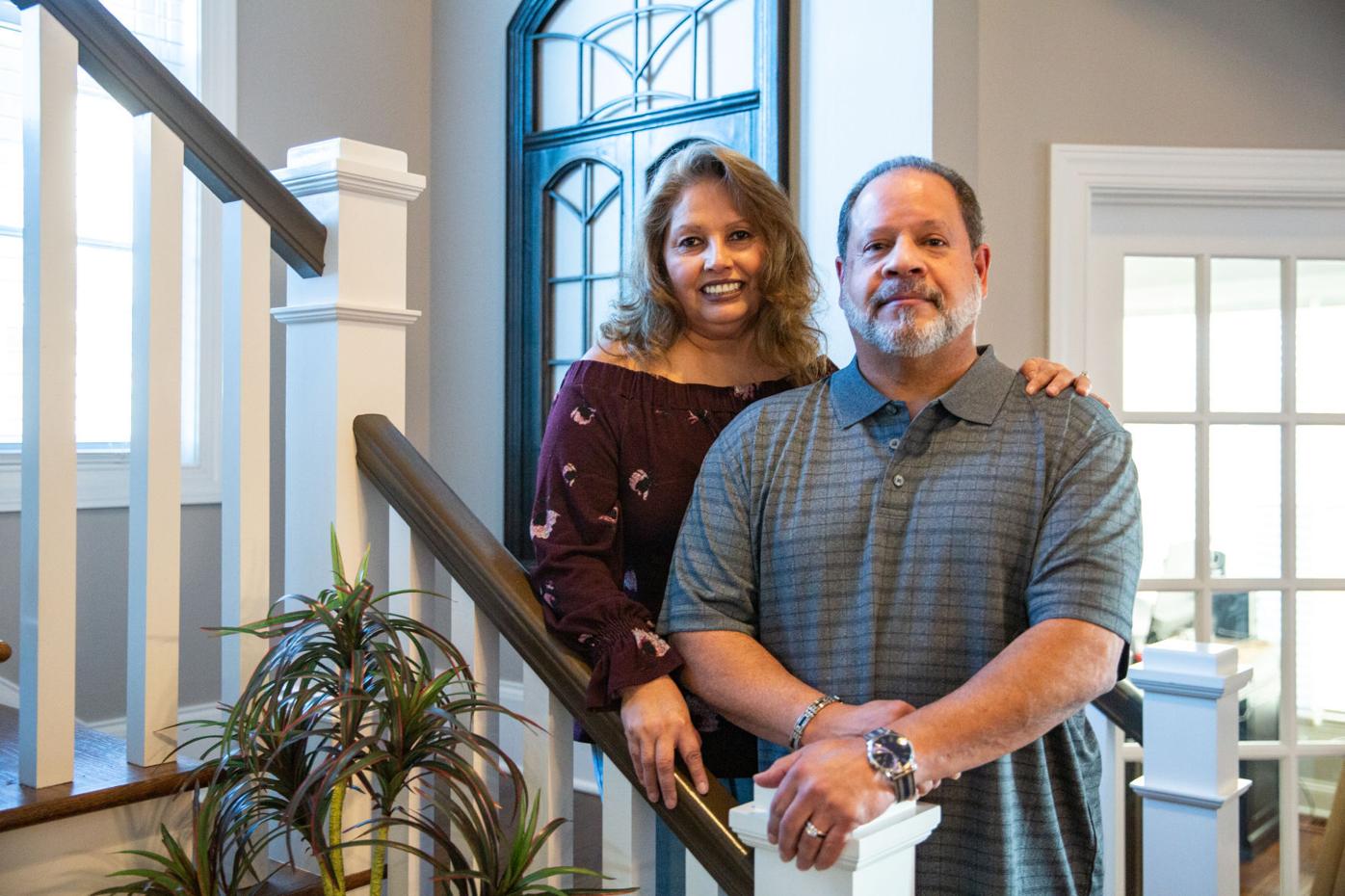 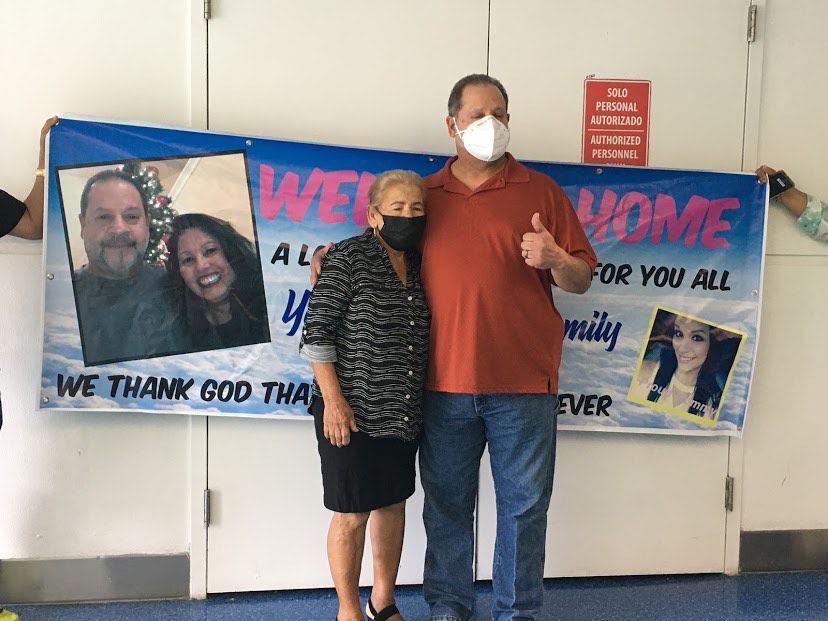 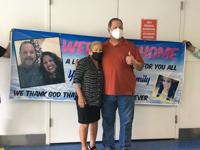 William Scrivner and his biological mother Nelida Martell Caban are seen here shortly after meeting each other in person for the first time after 62 years of separation. 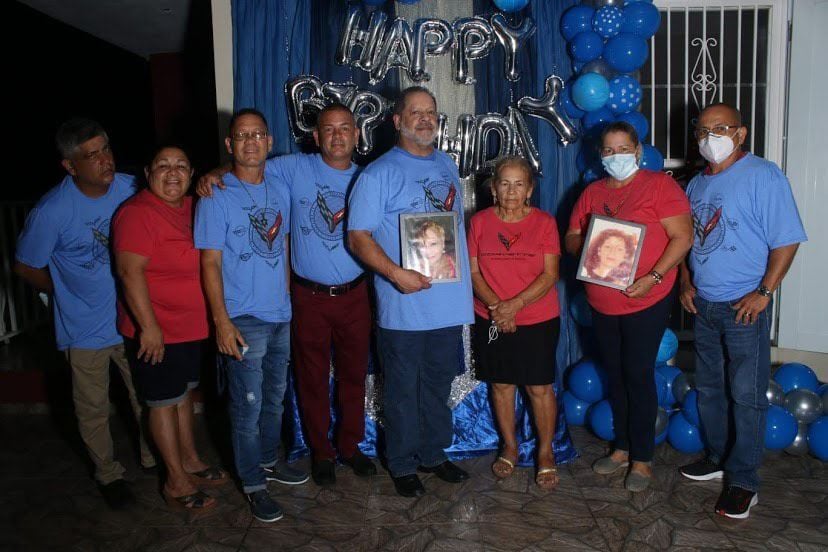 William Scrivner (center with picture) was treated to a surprise birthday party in Puerto Rico shortly after meeting his mother Nelida Martell Caban (next to William). Several other newly-found family members were present as well. 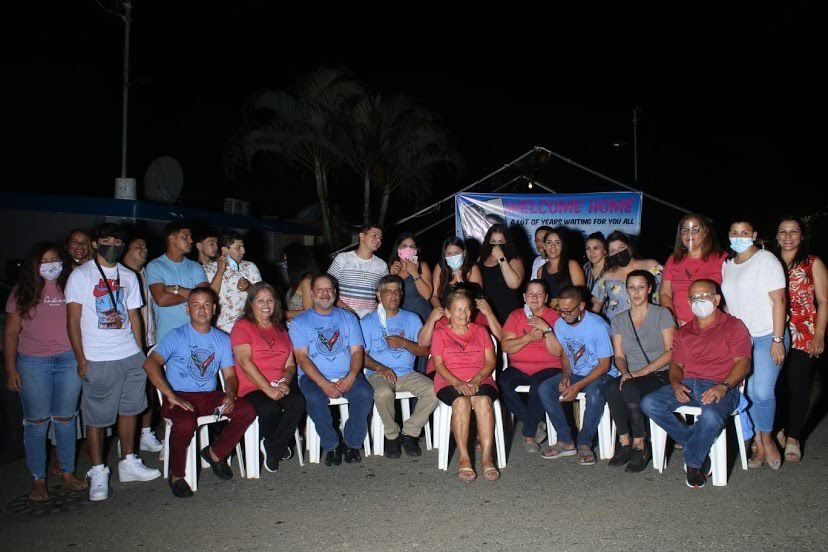 After finding and meeting his biological mother in Puerto Rico for the first time in over 62 years, William Scrivner was also able to meet dozens of newly-found family members he never knew he had. Some of which are seen here with William (front row, second from far left). 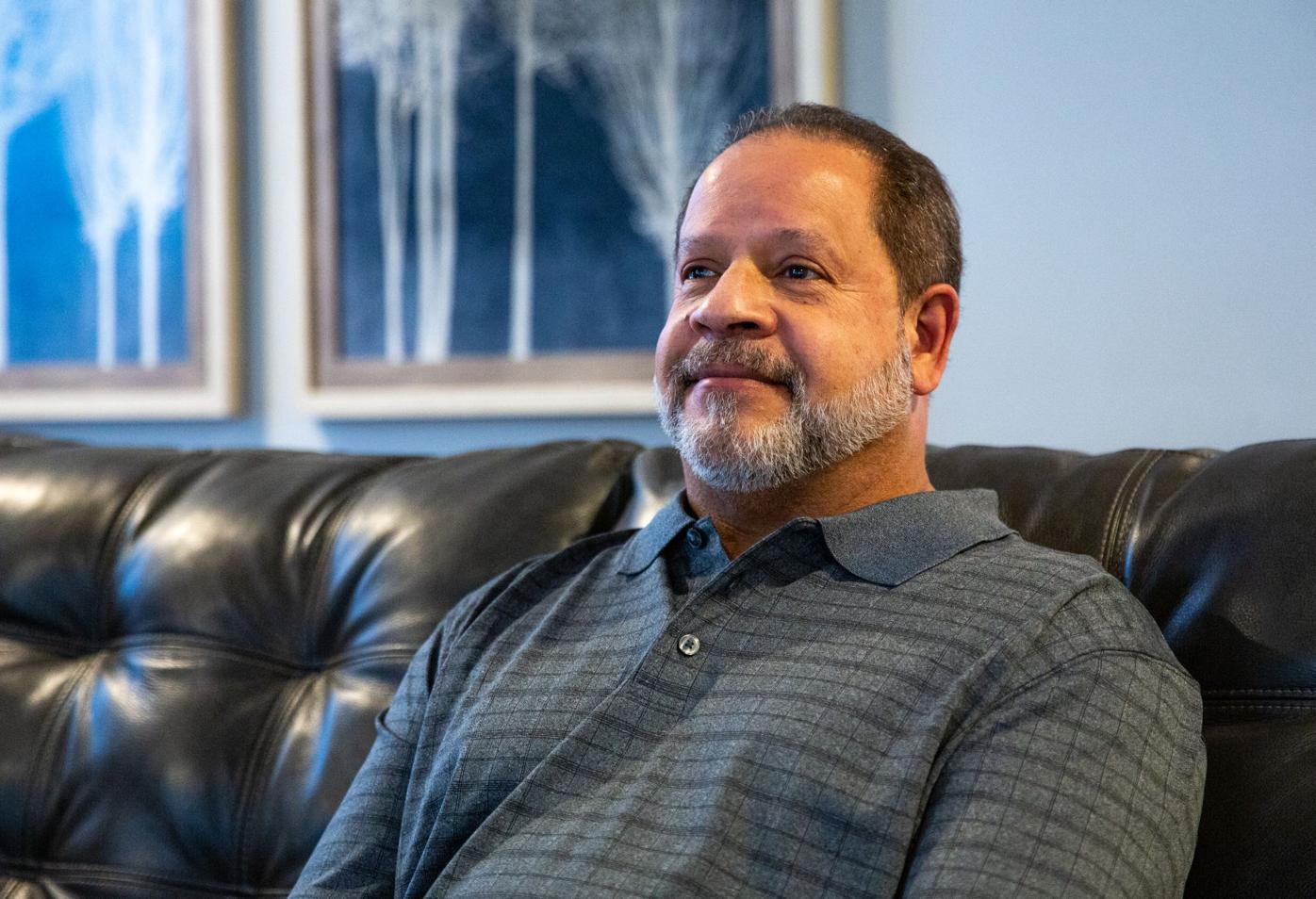 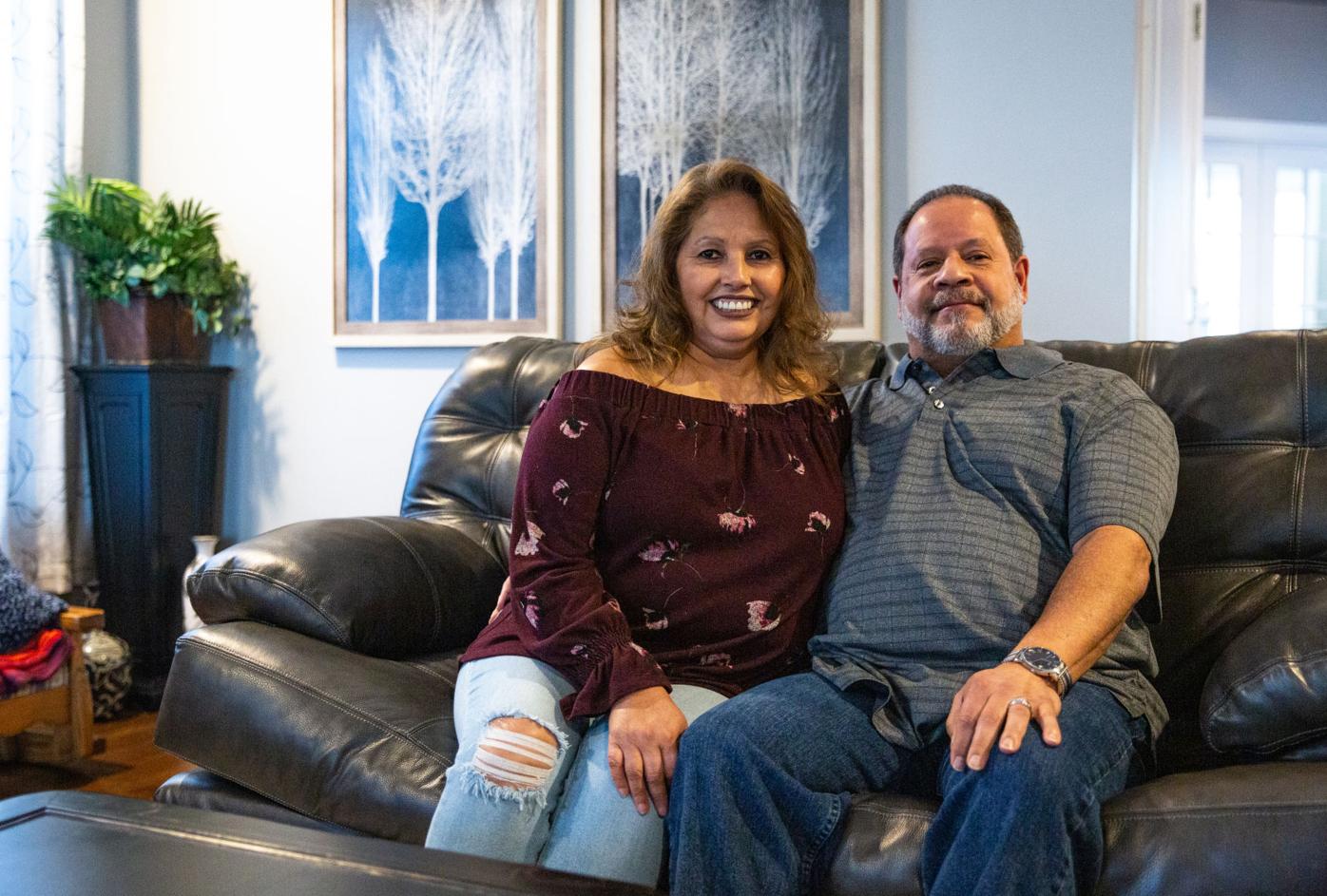 Rebecca and William Scrivner relax Monday at their home. 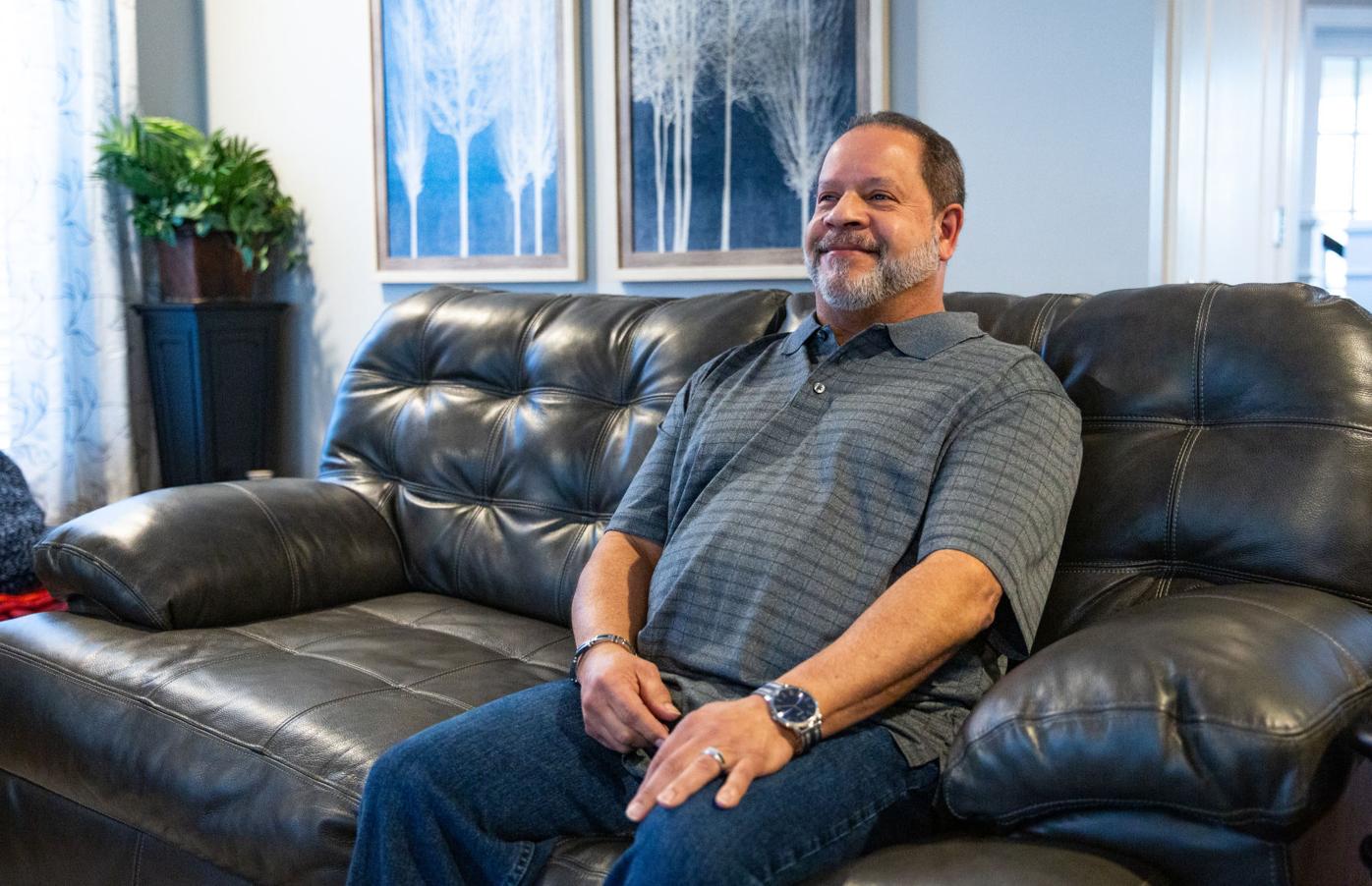 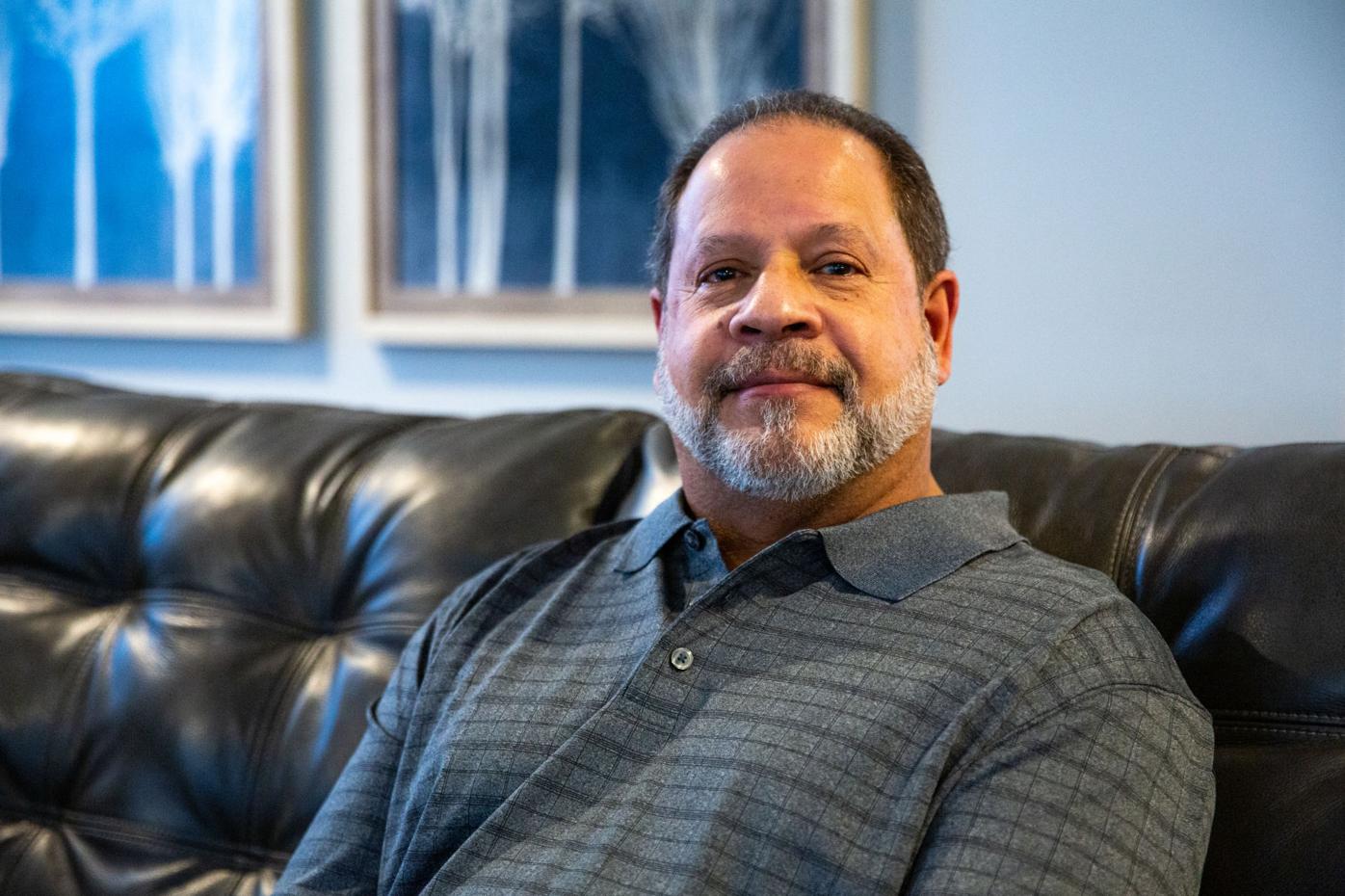 William Scrivner and his biological mother Nelida Martell Caban are seen here shortly after meeting each other in person for the first time after 62 years of separation.

William Scrivner (center with picture) was treated to a surprise birthday party in Puerto Rico shortly after meeting his mother Nelida Martell Caban (next to William). Several other newly-found family members were present as well.

After finding and meeting his biological mother in Puerto Rico for the first time in over 62 years, William Scrivner was also able to meet dozens of newly-found family members he never knew he had. Some of which are seen here with William (front row, second from far left).

Rebecca and William Scrivner relax Monday at their home.

William Scrivner of Bowling Green experienced the full range of emotions as he walked through the airport terminal with his wife, Rebecca Scrivner, toward one of the most important moments of his life.

Adopted at birth, the 62-year-old man had just landed in Puerto Rico, where he was about to meet his biological mother.

After getting their luggage and making it through security, William Scrivner rounded the corner and was greeted with a life-changing sight.

Not only was his mother, Nelida Martell Caban, there waiting for him, but so were a large group of his long-lost family members who were holding a large banner that read, “Welcome Home!”

What followed next was a joyful reunion of happy tears and passionate hugs.

“This has been one of the greatest things that’s ever happened to me,” he said.

“It’s right up there at the top. It’s hard to put into words what I feel at my age to find my mom. It’s unbelievable.”

The reunion was the culmination of a search that lasted more than 30 years. His long-lost family, as it turns out, had also been searching for Scrivner.

“We all just cried,” William Scrivner said. “They said they were looking for me forever, and they were just as shocked as I was. They had known the whole story about me their whole lives. There was a lot of crying and joy there.”

Shortly after being born, he was adopted by Wildon and Marie Scrivner. His adoptive father was in the Army Air Corps and had been stationed in Puerto Rico, where they found William.

They returned to Wildon Scrivner’s hometown in Tuscaloosa, Ala., where William spent his formative years. He eventually moved to Bowling Green with Rebecca in 2013 as a welder with General Motors.

After both of his adoptive parents died when he was 25 after battles with cancer, William Scrivner felt what he said was a “feeling of emptiness.”

His adoptive parents never hid the fact the he was adopted, and William had his original birth certificate. After their deaths, he found a Puerto Rico phone book and a map of the island to officially begin his search.

But after 20 years of hoping to find his long-lost mother, he had made little progress.

“It’s been a long journey, and it’s been a long search,” William Scrivner said. “I was beginning to wonder if it was ever going to happen. I’m 62 and I knew she was getting up there in years as well.”

In 2009, Rebecca Scrivner widened the search by hiring a private detective. However, the search hit another snag when they learned Puerto Rico doesn’t release adoption records.

The detective couldn’t do any more for the family, and they were back to square one.

“It was a huge loose end,” Rebecca Scrivner said. “But I didn’t want to give up. I told him that as long as I was alive, I was going to look for his mother.”

The still-hopeful wife then took her search to Facebook.

She put the full story on a Puerto Rico regional Facebook page. They said they were looking for a woman named Nelida Martell who gave birth to a baby boy named William who was given up Oct. 30, 1958.

One of his biological cousins found the message, called right away and told the Scrivners that they have been searching for him for years as well.

Thanks to a Facetime call Oct. 20, William Scrivner was finally able to see his biological mother for the first time since he was born.

“It was off-the-wall great,” William Scrivner said as he held back tears. “I had never experienced anything like it. It was a dream come true. I still get emotional. There is nothing sad about it, don’t get me wrong. But it’s overwhelming that it took 62 years for this to happen.”

As the Facetime call went on, William Scrivner’s biological siblings kept pulling up to his mother’s house to join the joyful call. He now has dozens of newly found family members in Puerto Rico.

Not long after the first call, Rebecca Scrivner bought plane tickets to Puerto Rico so William Scrivner could finally meet his mother and family in time for his birthday Oct. 30.

On the flight, the couple told their hopeful story to the stewardesses, who passed his story along to the pilots.

“They gave him a bottle of wine,” Rebecca Scrivner said with a smile. “We get off the airplane and the pilots, stewardesses and other workers were all lined up down the tunnel for us. They pointed to him as we got off, and they all started applauding. He broke down when that happened.”

After the airport reunion, the couple went to Aguadilla, Puerto Rico, which is where William Scrivner’s mother lives. There, he was treated to a surprise birthday party by a large group of family members.

“It couldn’t have been any better,” he said. “They made it a wonderful experience. They all loved me, and they made it well-known.”

To this day, he said he hasn’t asked why he was put up for adoption, and he insists that he never will.

“While we were down there, my mom wanted to apologize for all of it,” William Scrivner said. “I told her that I didn’t want to hear any apologizes. For me, I don’t really care why I was put up for adoption. Right now, all I know is that I have found a mom and brothers and sisters and they have proved to me right off the bat that they love me and they want to be in my life. I’m good with that. Maybe that’s crazy, but I don’t care.”

Since the trip, William Scrivner said he has been in constant contact with his mother, who he talks to every night on the phone for at least two hours.

The couple is planning to go back to Puerto Rico for his mother’s birthday in January, but COVID-19 restrictions make the timetable for a return uncertain.

“This is the biggest event of my life, and I want to go back down there and spend time,” William Scrivner said. “I know I need to do it. She is 80 and tomorrow isn’t promised to any of us. When you are 80 years old, you know the score.”

He also added that he is “incredibly thankful” for the work his wife put it during the search, and that it wouldn’t have been possible without what she did.

For Rebecca Scrivner, her husband’s joy is all that matters.

“We need stories like this right now,” she said. “When I saw his face when he saw his mom for the first time, it brought me tears. I told him that a lot of us don’t have our parents anymore so to see that joy in him to get that back – I’m just happy for him.”