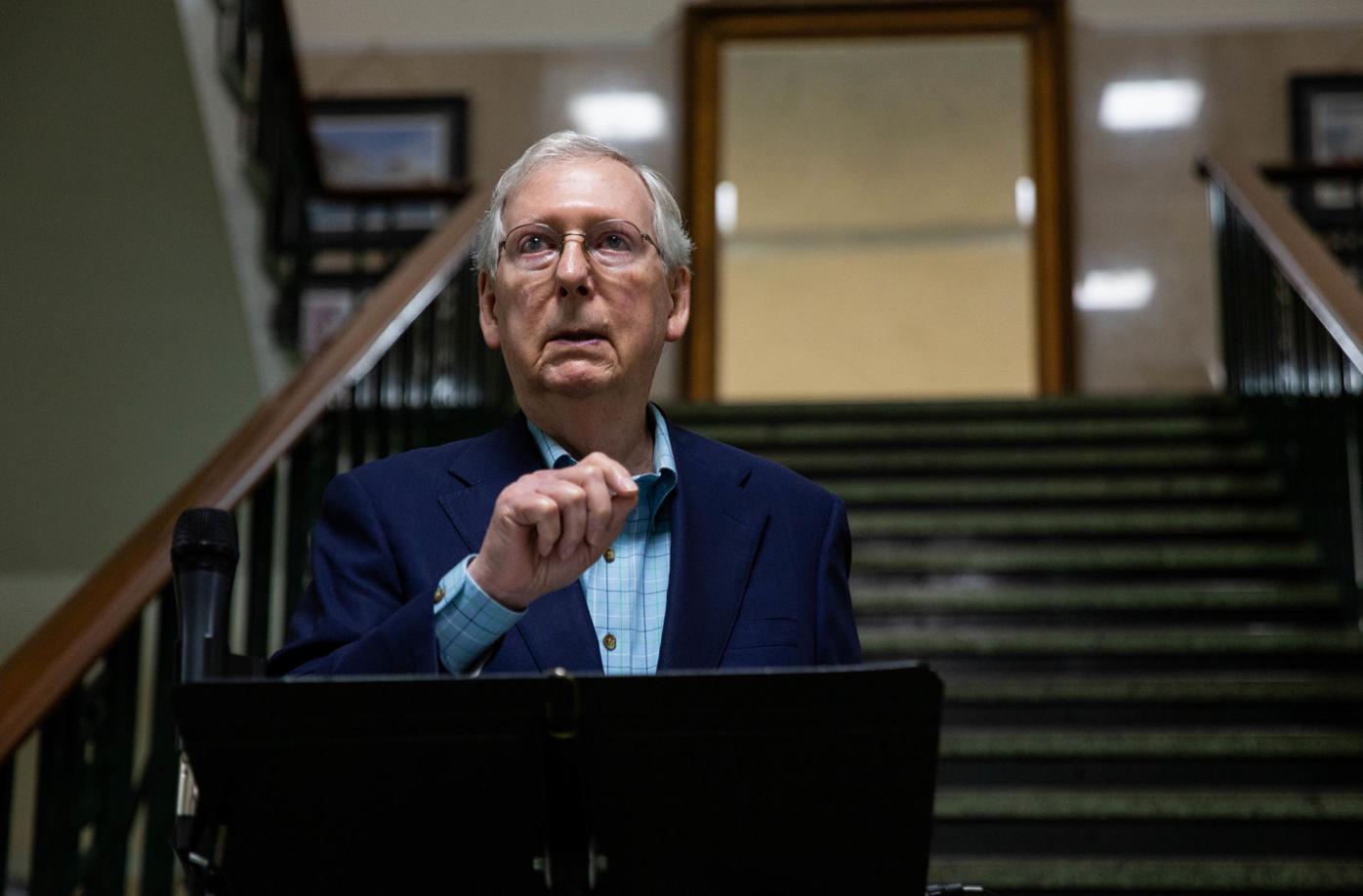 Senate Majority Leader Mitch McConnell speaks at a news conference at the Warren County Courthouse in May., May 27, 2020. (Grace Ramey) 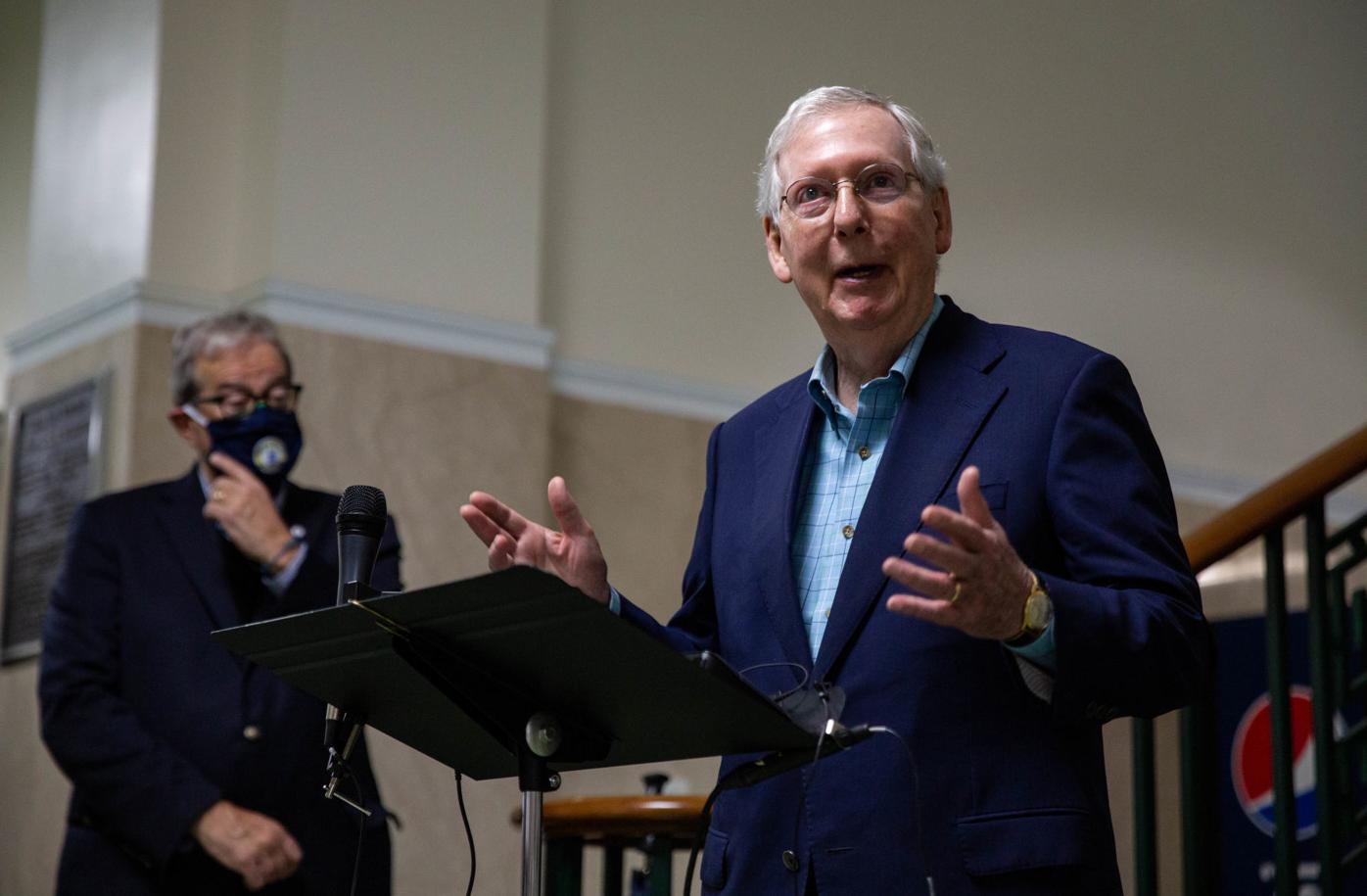 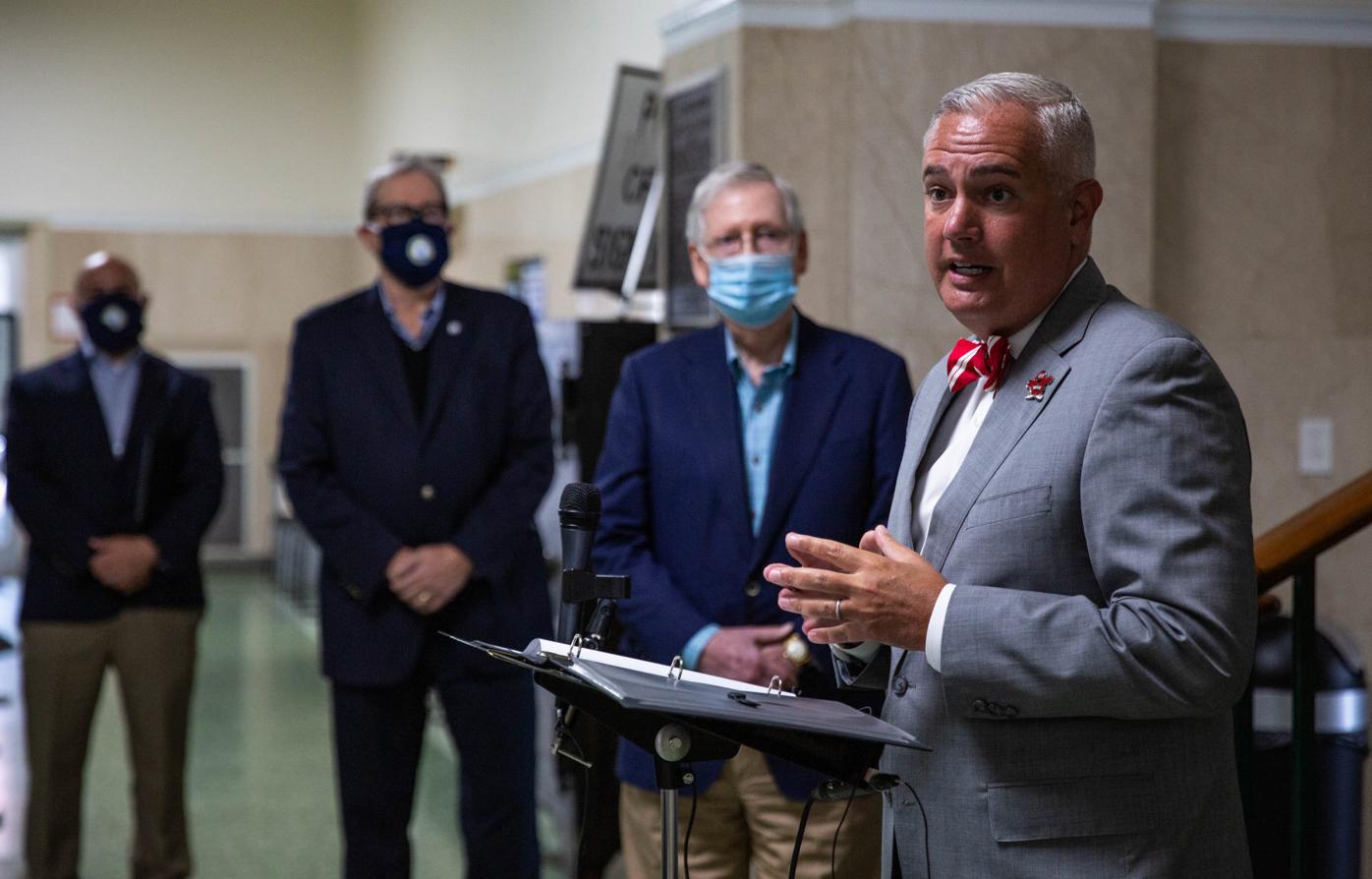 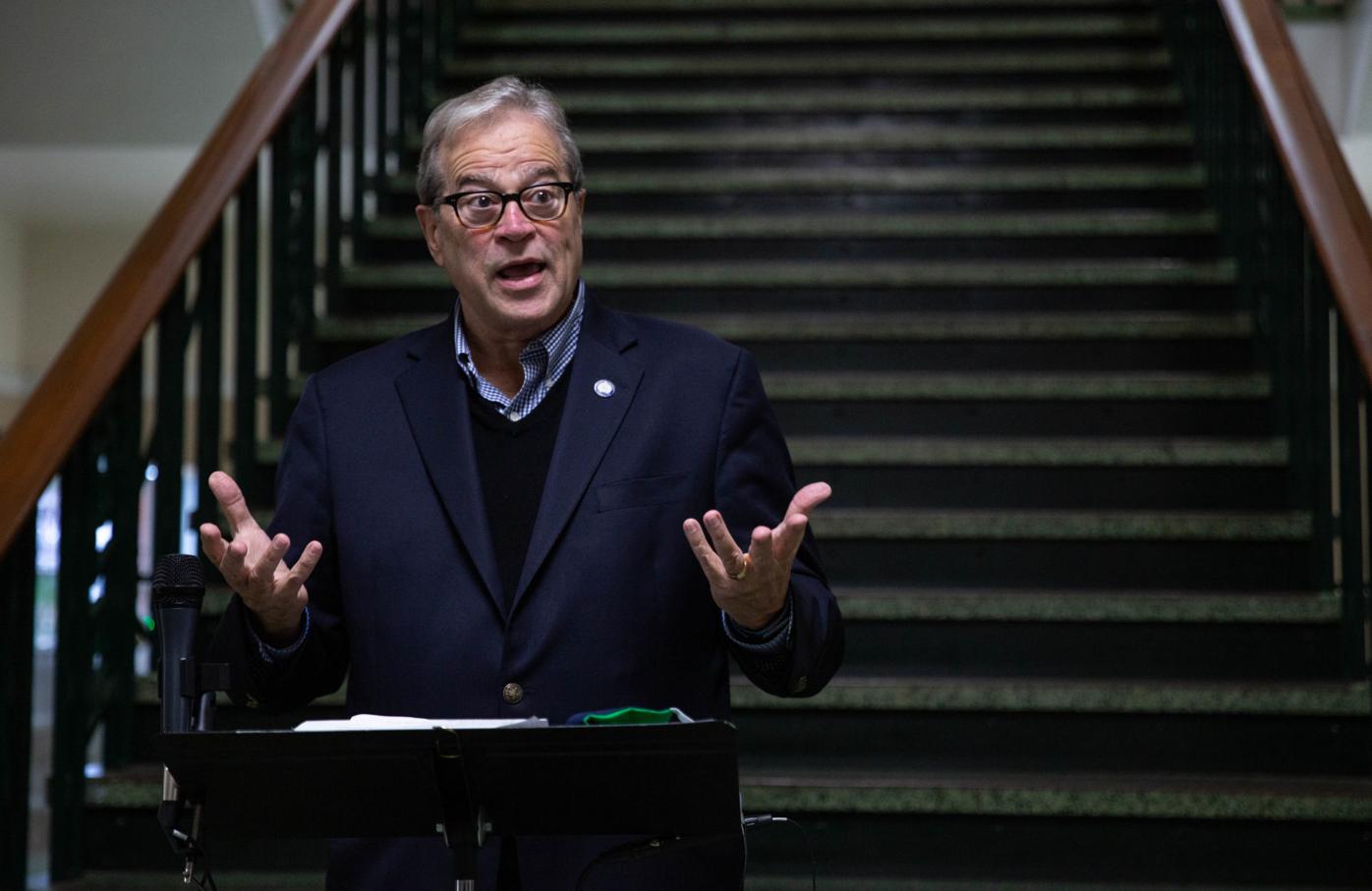 Warren County Judge-Executive Mike Buchanon speaks at a news conference at the Warren County Courthouse on Wednesday, May 27, 2020. 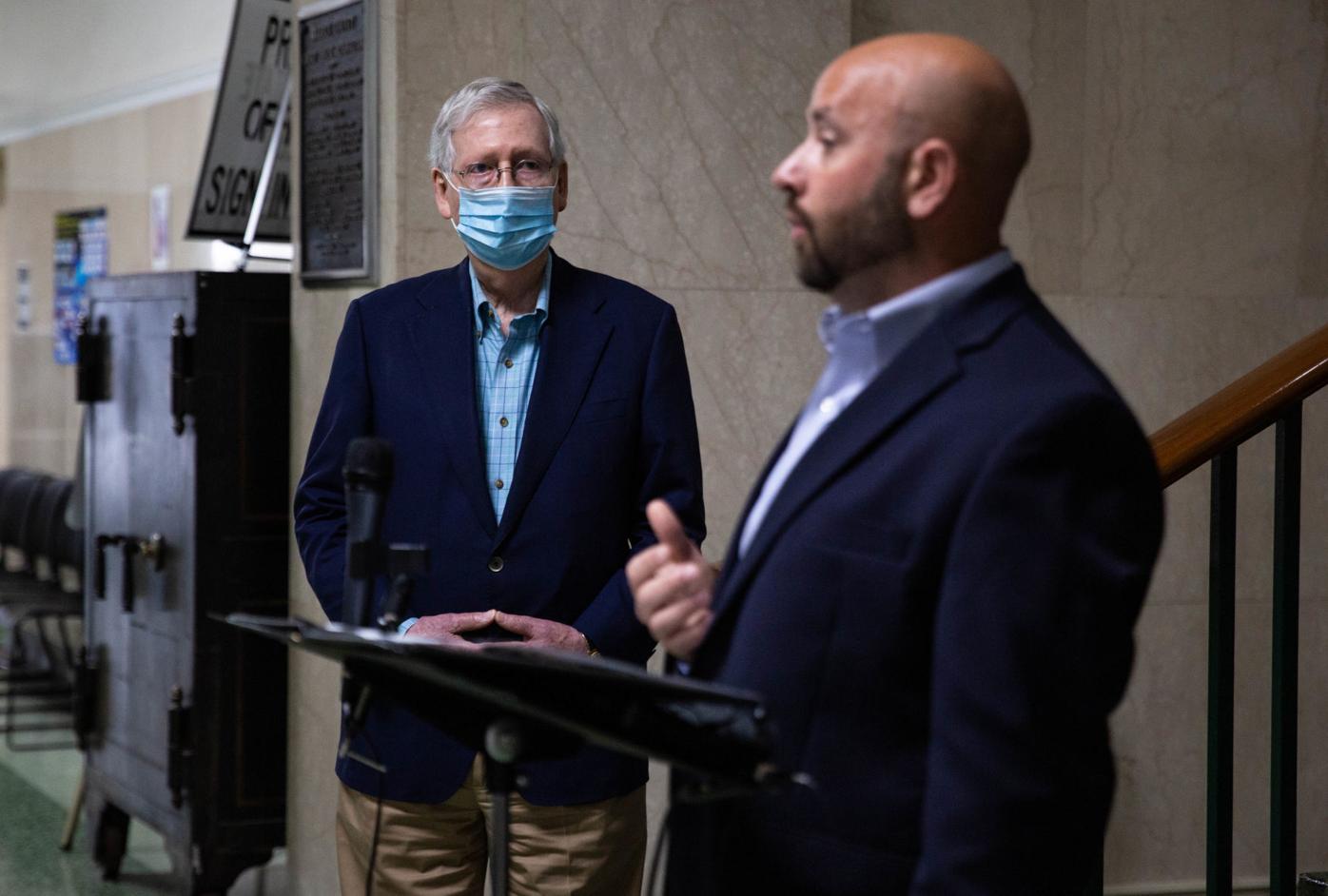 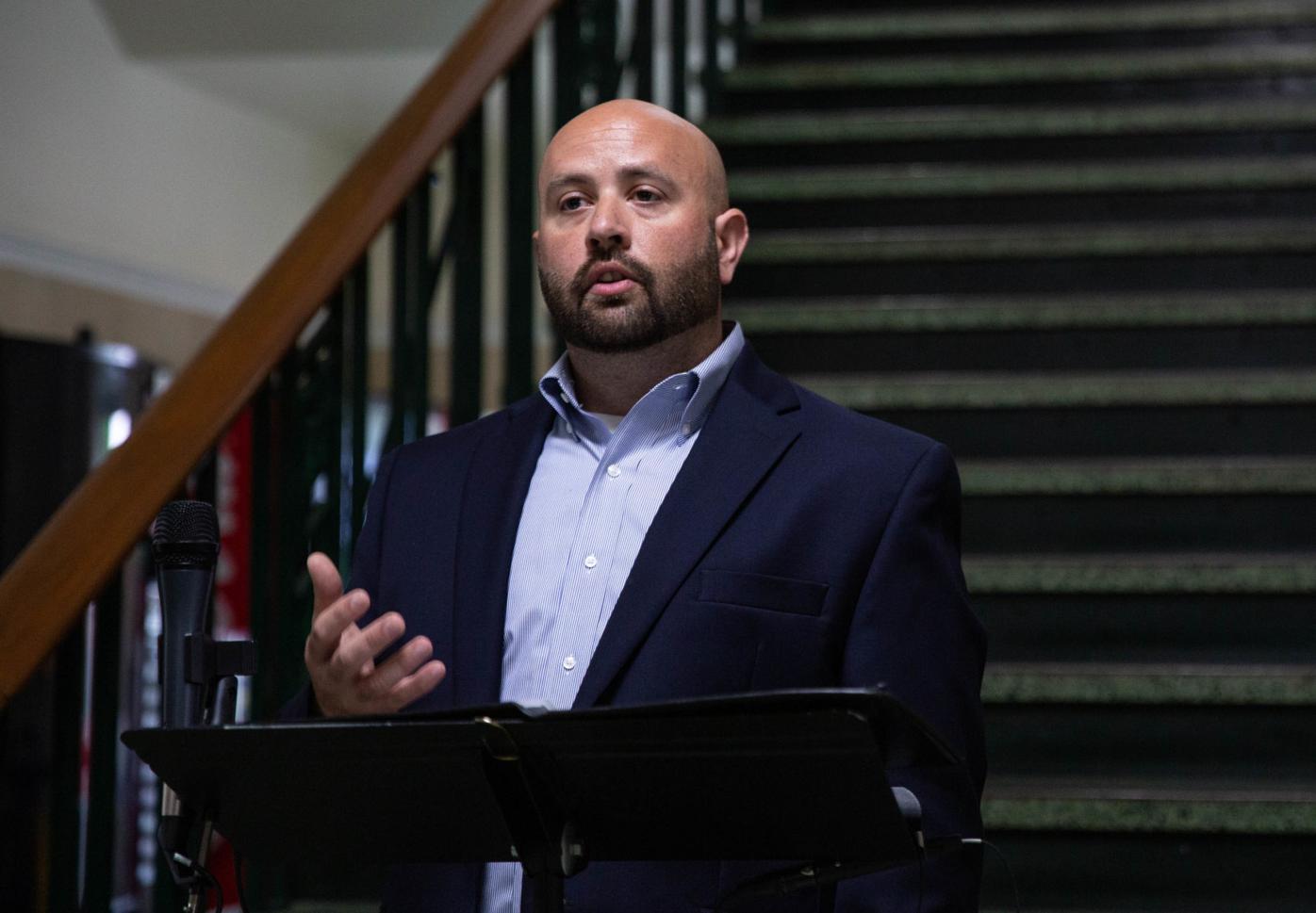 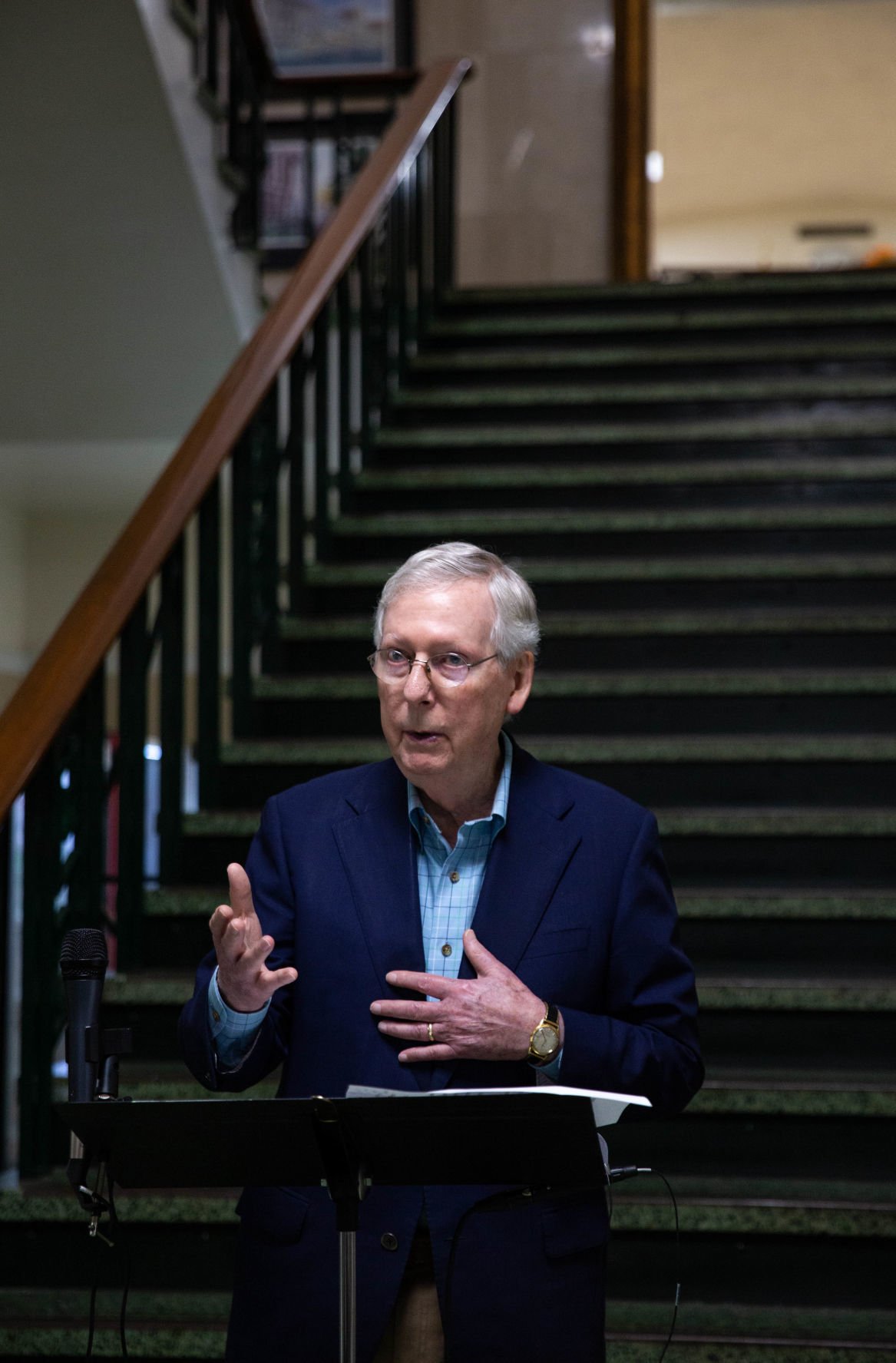 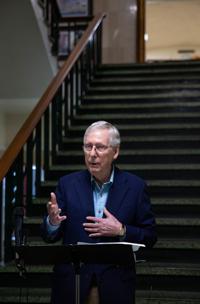 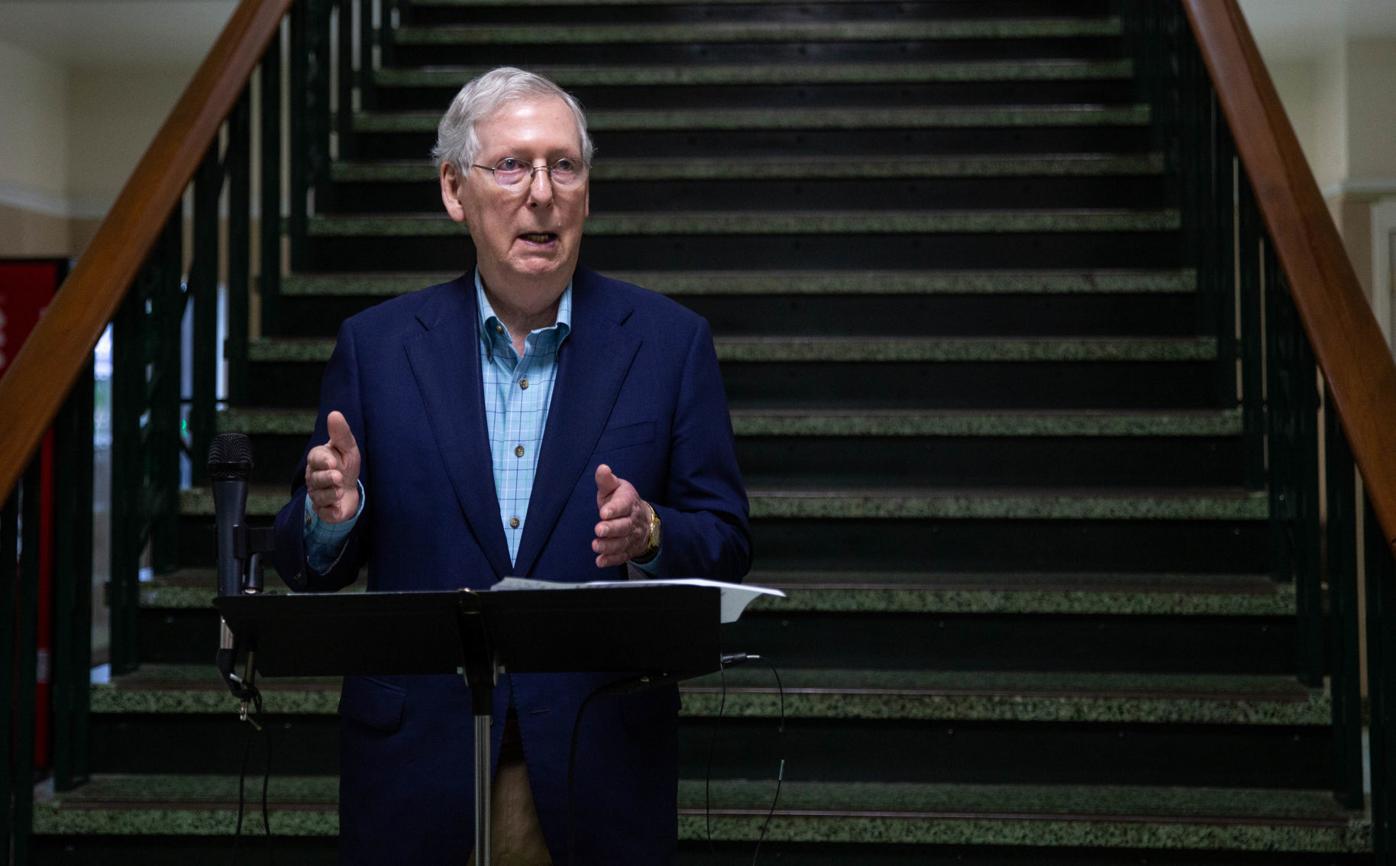 Senate Majority Leader Mitch McConnell speaks at a news conference at the Warren County Courthouse in May., May 27, 2020. (Grace Ramey)

Warren County Judge-Executive Mike Buchanon speaks at a news conference at the Warren County Courthouse on Wednesday, May 27, 2020.

While touting the $2 trillion CARES Act passed in March, McConnell said he is “pushing the pause button” before agreeing to another coronavirus relief bill.

Earlier this month, the Democratic-led House passed a broad, $3 trillion relief package dubbed the HEROES Act. McConnell reiterated Wednesday that the bill has no chance of passing the Republican-led Senate, calling it a “grab bag” and “not a serious effort.”

The HEROES Act includes another round of $1,200 direct cash aid to individuals with a $6,000 maximum per household, and it launches a $175 billion housing assistance fund to help pay rents and mortgages, according to The Associated Press. It also includes $75 billion for virus testing, new subsidies for laid-off workers to pay health insurance, an employee retention tax credit for businesses and $200 billion in “hazard pay” for essential workers.

McConnell said that while another round of relief is likely, he wants to wait and see where the country is in a few weeks as it gradually reopens amid the pandemic that has killed more than 100,000 Americans.

He said the country’s debt, already at record levels, also needs to be taken into consideration before another relief bill is passed.

“We can’t borrow enough to prop up the country,” he said.

He said if there is a next relief bill, it should focus on “jobs and kids,” saying reopening schools will be vital. He said the chances of school-age children dying from the coronavirus are “minuscule.”

McConnell said while he believes in continuing funding unemployment benefits, he called the added $600 weekly unemployment benefit included in the CARES Act a “mistake,” saying people are being paid more to stay home on unemployment than go back to work. The benefit is slated to expire in July. The HEROES Act would continue the $600 benefit through January.

He also reiterated his stance that a future aid package will have to include liability protections for businesses – “You can’t function again worried about an army of lawyers” outside your door, he said.

Democrats have largely balked at including such liability protections, arguing that employees must be assured that they will not be forced to work in unsafe conditions.

The CARES Act included $150 billion for local governments to offset some costs related to dealing with the pandemic, but many local government leaders have said more aid is needed to offset massive revenue shortfalls.

Democrats included nearly $1 trillion for state and local governments in the HEROES Act.

“Obviously they’d like to have more,” McConnell said of governments, but he wouldn’t commit to working to ensure such aid is included in the next relief bill.

Answering a reporter’s question, McConnell also addressed the protest at the Governor’s Mansion in Frankfort over the weekend that included the hanging of a dummy with a photo of Gov. Andy Beshear’s face on it.

While condemning the protest, McConnell said he disagreed with Beshear’s statement Tuesday that politicians who have lent support to those involved in Sunday’s actions bear some responsibility. “You cannot fan the flames and condemn the fire,” Beshear said at his Tuesday news conference.

Before McConnell spoke, local leaders also spoke and touted the “collaborative” effort to fight the pandemic in Warren County, which has seen almost 1,000 cases of the virus as of Wednesday.

Buchanon said the last three or four months “seem like three or four years.” He said, “now the real challenge begins” as many businesses reopen. “Only we the people can do the right thing,” such as wearing face masks and social distancing, he said.

Caboni said the local collaboration “has been remarkable” and he again committed to reopening campus in the fall.

“We will be back this fall with students on campus,” he said.

Details about how in-person life at WKU will look this fall have not been released.

All the Dems need to do is wait a little while for Mitch and Trump to realize that they desperately need to pass the House's bill to have any hope of preventing a severe recession before election day. Nancy Pelosi should be saying "Pass the popcorn".

Let's just forget that the people teaching the children are usually immuno-supressed teachers. Just offer them up as sacrifical lambs!

The country is bankrupt and has been for a long time. The only reason we have not had our day of reckoning is because we had the juggernaut economy of the world AND we could afford to pay the interest on what we borrowed. This has changed. Where before we could find buyers for treasury notes used to finance our borrowing, now our creditors want to sell those notes and so there are no ready buyers.The Fed is now monetizing our debt. This is the beginning of insolvency. As the dollar falls, inflation will set in with a vengeance and everything will get more expensive. Borrowing trillions more that has to be repaid is like throwing gas on a fire. Even if we could repay it which we can't, the economy is toast so there are no taxes coming in to pay the debt back. We could buy some time if the economy takes off again but that won't be sufficient to stop the inevitable. Brace for impact...

The money system is a man-made system. the economy is screwed no matter what, no matter when. The Federal Reserve can print out unlimited amounts of money to add to the economy. They simply keep a leash on it for various reasons. But we're in a 'different world' right now. They can afford to print some sheets of green to pass out.

So what Mitch is saying is that no recourse to the justice system exists for the non-oligarchs anymore. We lost it years ago with goods and services. Then we lost it with employers. Then we lost it with companies applied to for employment. So, what mitch is saying, is 'screw the American people'. Getting sued was the only thing that kept firms from whole sale descrimination. It was the only thing that kept the products safe. And so nobody will get a lawyer for anything except wrecking their nuclear family or getting money from an accident. That will be it. That and rich people setting up fictional people for themselves. Justice on the other hand, behavior control, Medical professionals actually being held accountable for going against their training and knowledge because they are loyal to the bureaucracy... Well all that --- nope. Mitch doing his part to keep half of america as a third world #%^^Country. What we need is more access to lawyers and lawsuits, not less. The country turned to dung compared to its former self because nobody had recourse to the justice system to right wrongs anymore.

The lawsuits is some kind of dogwhistle. Nobody can afford laywers up front costs and they don't take that kind of case on contingency, and they have no cause of action. If only we could sue some sense into the leaders of everything. Claiming they are relying on science with junk that changes every single day and makes no numerical sense at all. There are now more deaths from suicide than the viral illness[1]. That's to be expected from economic lockdown effected by fiat. It's to depressing to even really follow. The government will please the educators because that is the most solid voting block to ensure longevity of policy desires. But what the decisions are not based on, is science with any kind of reasonable goal. That is a mathematical certainty.