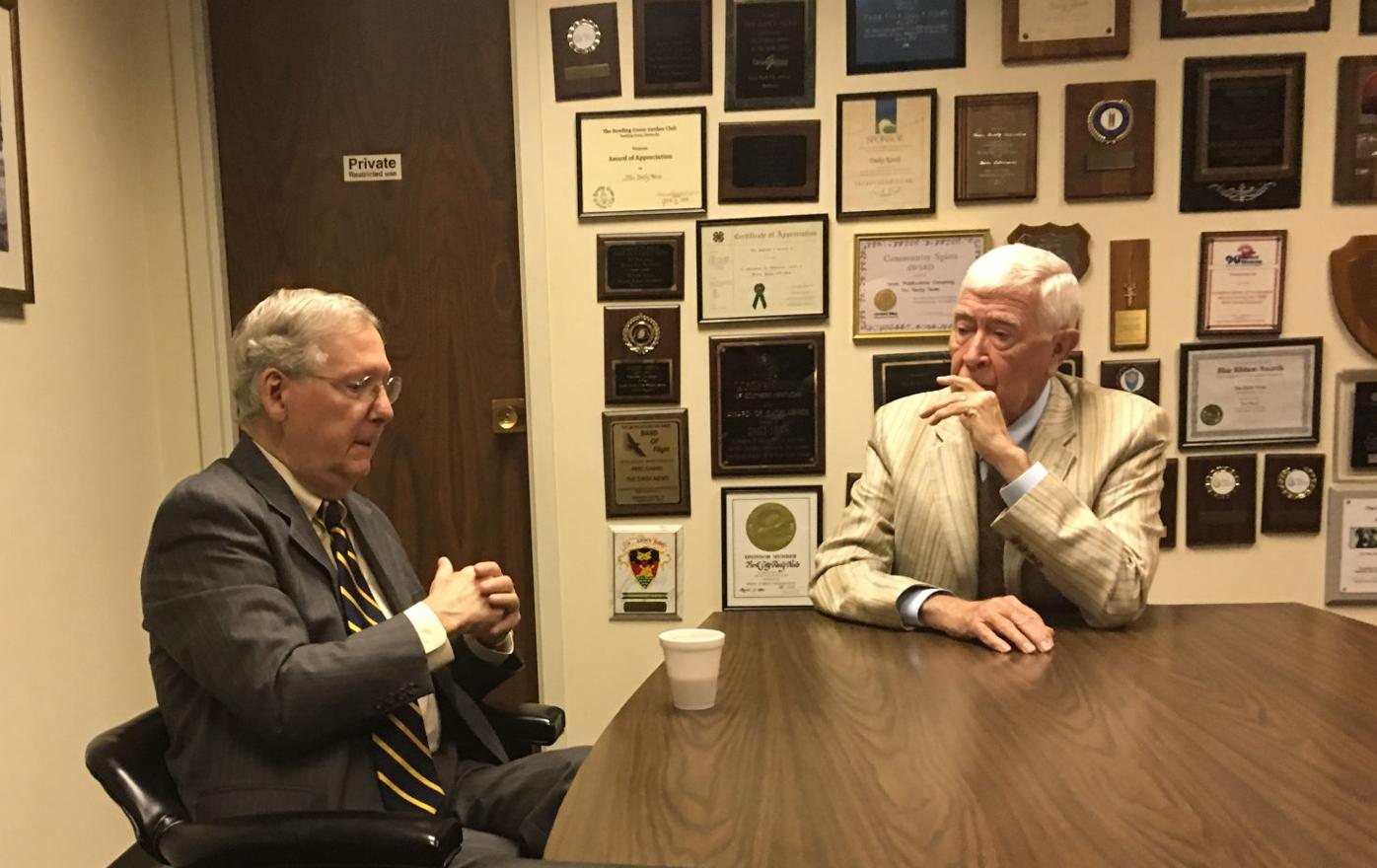 U.S. Senate Majority Leader Mitch McConnell (left) speaks to the Daily News editorial board. Daily News president and publisher, Pipes Gaines is at right. McConnell said Monday he plans to roll out the first of 12 federal appropriations bills a month early to get the workings of the Senate back on track. (Joe Imel/jimel@bgdailynews.com) 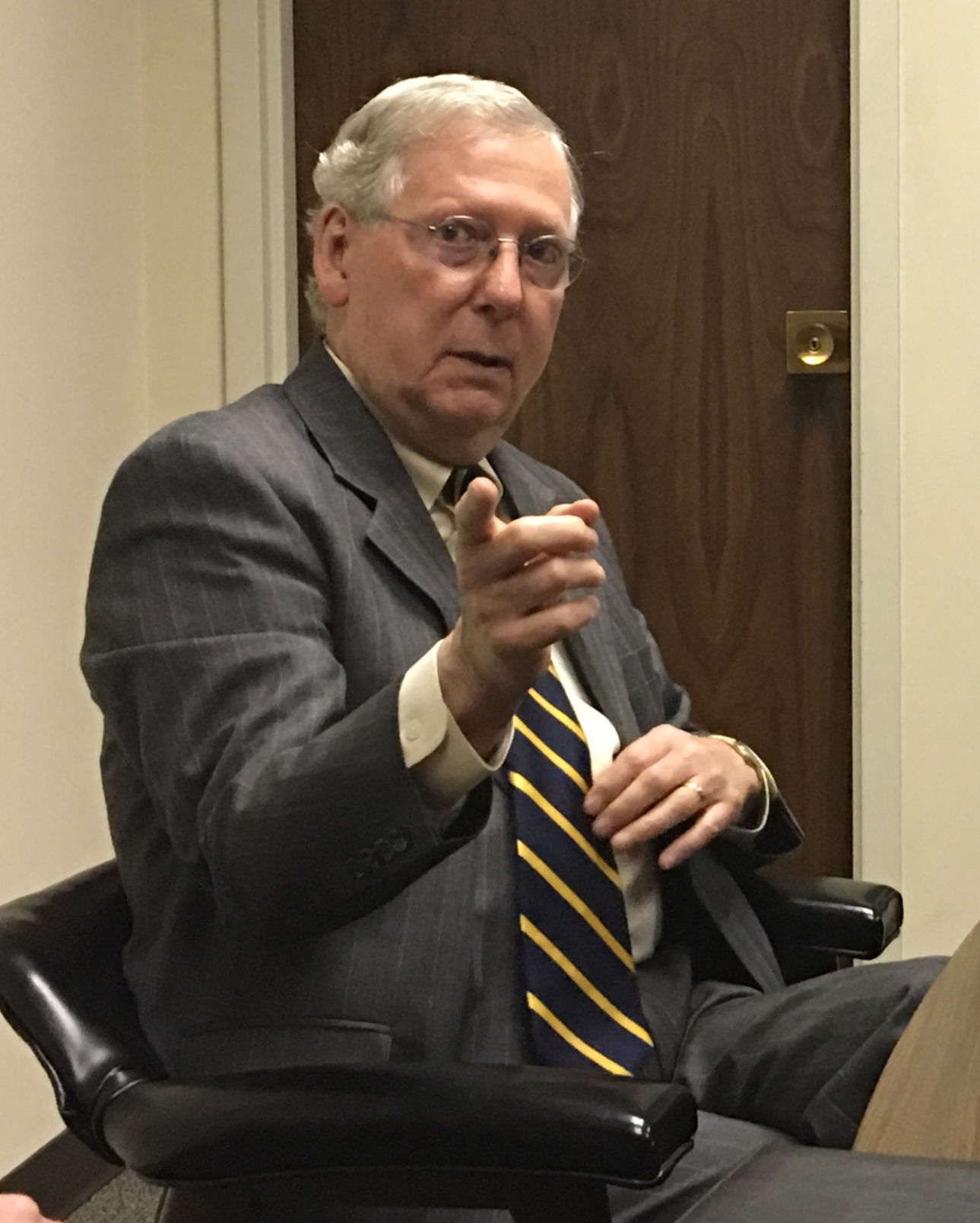 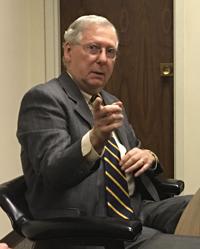 U.S. Senate Majority Leader Mitch McConnell speaks to the Daily News editorial board. McConnell said Monday he plans to roll out the first of 12 federal appropriations bills a month early to get the workings of the Senate back on track. (Joe Imel/jimel@bgdailynews.com)

U.S. Senate Majority Leader Mitch McConnell (left) speaks to the Daily News editorial board. Daily News president and publisher, Pipes Gaines is at right. McConnell said Monday he plans to roll out the first of 12 federal appropriations bills a month early to get the workings of the Senate back on track. (Joe Imel/jimel@bgdailynews.com)

U.S. Senate Majority Leader Mitch McConnell speaks to the Daily News editorial board. McConnell said Monday he plans to roll out the first of 12 federal appropriations bills a month early to get the workings of the Senate back on track. (Joe Imel/jimel@bgdailynews.com)

U.S. Senate Majority Leader Mitch McConnell said Monday he plans to roll out the first of 12 federal appropriations bills a month early to get the workings of the Senate back on track.

McConnell, R-Ky., told the Daily News' editorial board that passing the regular number of appropriations bills during the year presents a smaller target for President Barack Obama's veto pen, while an omnibus appropriation funding invites government shutdown, a confrontation with Obama by Congress that Congress "cannot win."

McConnell said when Americans think about government shutdown, they think about the Republican Party.

"We own that brand," McConnell said.

He added that neither Republicans nor the Democrats in Congress have been able to get back to a sense of normalcy as the country remains polarized politically, so he is starting in the Senate to restore that normalcy through a regular appropriations process. He called the omnibus appropriation approach "an awful" way to run the government.

GOP leadership in the U.S. House has also stated its intention of moving regular appropriations bills through the year.

In a wide-ranging interview, McConnell also touched on the effect of Obama's executive actions, noting the president's forays into regulation of franchises, health care, clean water, employee work rules and clean air have "slowed the economy down" and endanger the viability of large and small businesses across America.

He also discussed the historic perspective of his push to leave the process of filling the U.S. Supreme Court justice post to the next president. McConnell said it has been 80 years since a Supreme Court vacancy during an election year was confirmed by the Senate. McConnell also said 1888 was the last time a vacancy on the Supreme Court created in a presidential election year was filled when the presidency and Senate control were held by different parties – Grover Cleveland, a Democrat, was in the White House and the Republican-controlled Senate confirmed Cleveland's nominee.

McConnell declined comment on the GOP U.S. presidential nomination process, except to say that he will support whoever receives the 1,237 delegates at the Republican convention.

"I don't know how this movie ends," he said of the U.S. presidential race.

He also spoke about one issue that has been made prevalent by Republican front-runner Donald Trump: the wall. McConnell said campaign pronouncements to build a wall between the U.S. and Mexico are not workable. Two U.S. cities are half in the United States and half in Mexico, he said, and a wall built in those two locations would "stop commerce in Texas."

"As a sound bite, it sounds good, but the (wall) solution doesn't work everywhere," McConnell said.

For example, Ciudad Juarez, Mexico, is El Paso’s sister city. The other Texas city also in Mexico is Laredo, whose sister city is Nuevo Laredo.

Turning to foreign policy in the Middle East, McConnell said two "safe zones" are needed in Syria to stem the tide of refugees and the president needs to take the offensive in taking down the Islamic State, or ISIS, by putting together a U.S.-led coalition of nations including Egypt, Syria and the Gulf states. The group would use special military operations and air power "to take them out. We are going to take down the head of ISIS."

The military approach puts the United States on the offensive. "I wish there was some other way to do it," McConnell said.

McConnell said ISIS wants to form a nation state in establishing the caliphate, unlike al-Qaida, a terrorist group that didn't want a government organization. That presents a different dynamic.

McConnell said the emergence of ISIS is because Obama did not leave an American "residual force" behind after the Iraq invasion and eventual U.S. troop pullout.

"That is a time-tested way to achieve normalcy," McConnell said of residual forces, such as those left behind in South Korea following the Korean War and other places. "The president believes we should lower our profile. That's not a successful way to operate" in the Middle East, McConnell said. He said the Middle Eastern nations are awaiting the U.S. to show leadership against ISIS.

Turning to Kentucky, McConnell said he believes new Republican Gov. Matt Bevin "is off to a good start" by addressing "the tough challenge" of the state's pension funding shortfall. McConnell said he doesn't get involved in state policy matters but he is talking to a number of Republicans running for the state House of Representatives in the November general election, mentioning Bowling Green City Commissioner Melinda Hill's 20th District House race against Democrat Senate President Pro Tem Jody Richards, D-Bowling Green.

Richards has represented the 20th House District since 1976. McConnell said until Kentucky's House is controlled by the Republicans, meaningful legislation regarding tort reform, right-to-work and charter schools won't be approved by the Kentucky General Assembly. McConnell said Bowling Green is particularly impacted by those issues since it is near Tennessee's northern border – a state which has right-to-work legislation and no state income tax.

McConnell said with the state House candidate recruitment of Republicans by his office for the November election, "we have a real shot this fall" of controlling the state House in Kentucky. The Kentucky House is the only Democratic-controlled legislative body in the South.