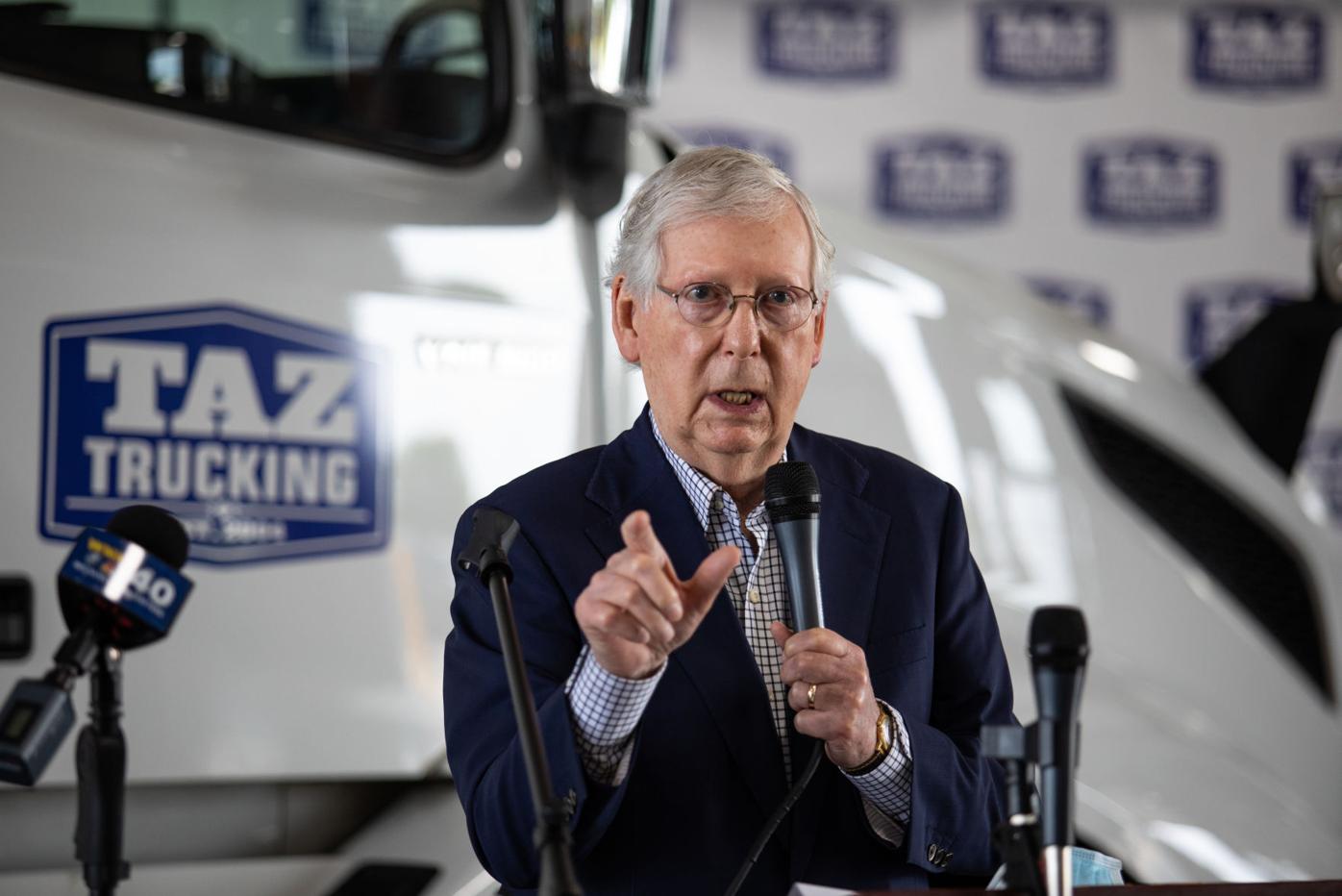 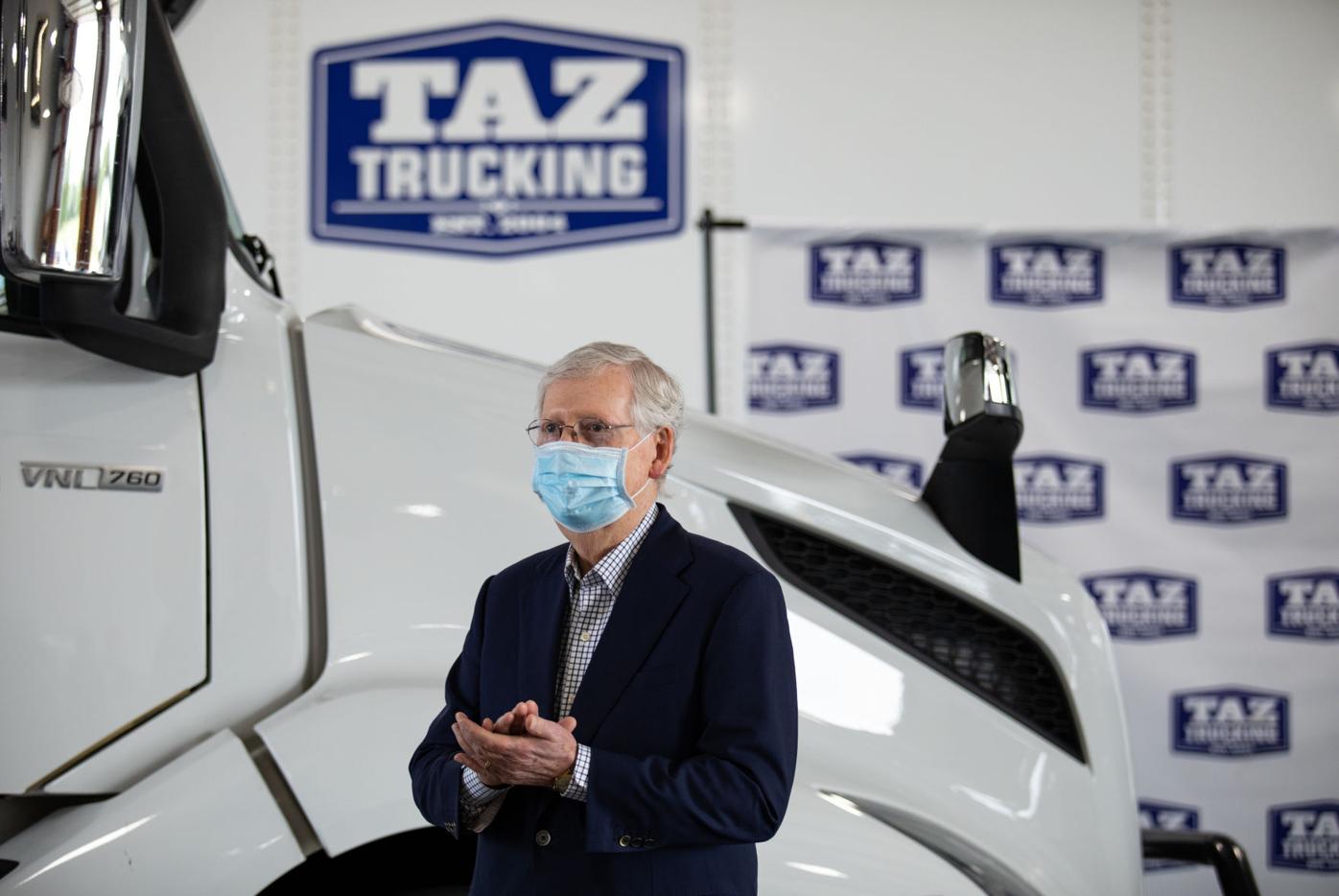 U.S. Senate Majority Leader Mitch McConnell, R-Ky., claps as city and state officials are welcomed by TAZ Trucking President Tahir Zukić to the freight company before coming to the podium to discuss the impact of the Coronavirus Aid, Relief, and Economic Security Act on Kentucky on Friday, Sept. 4, 2020. (Grace Ramey/photo@bgdailynews.com) 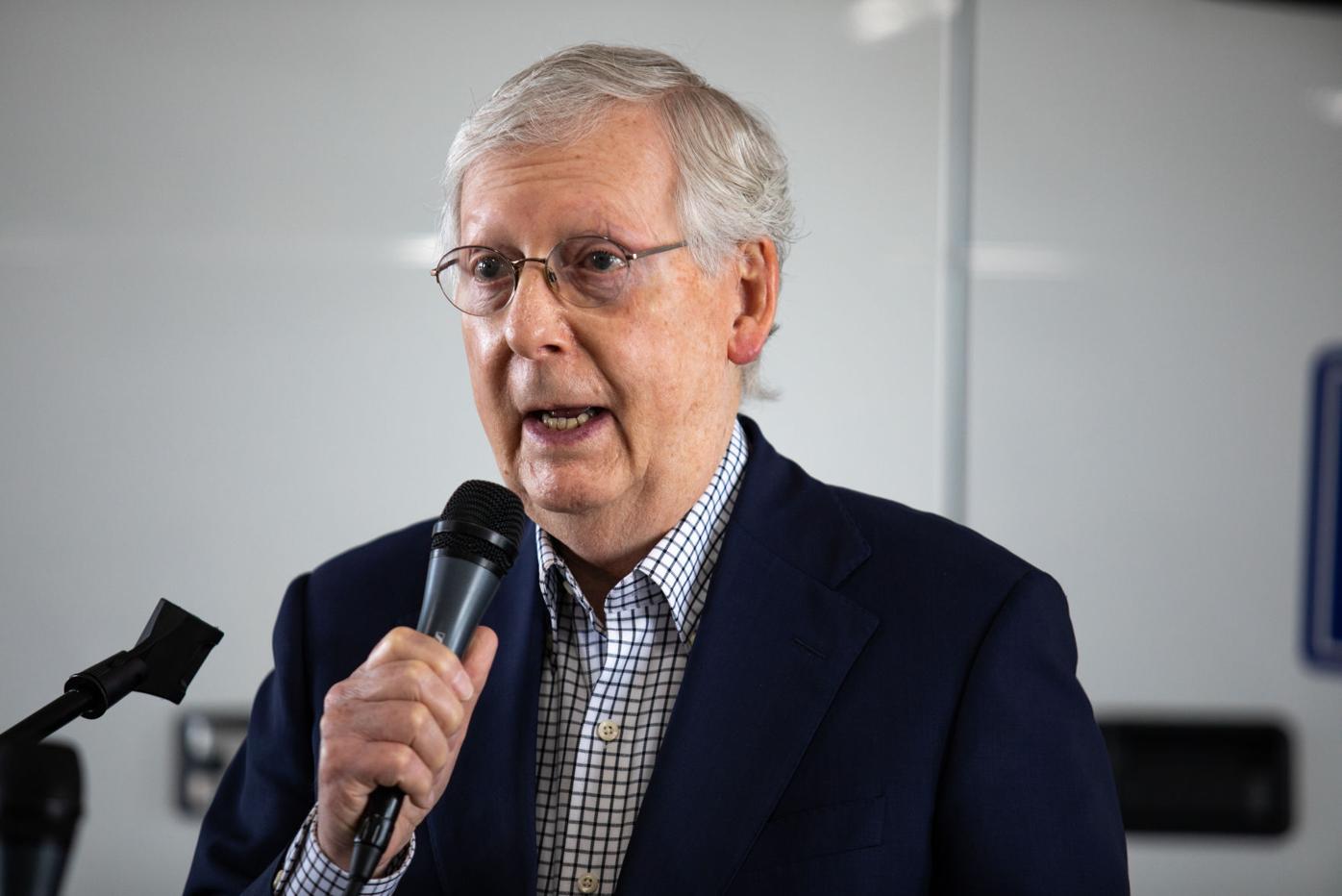 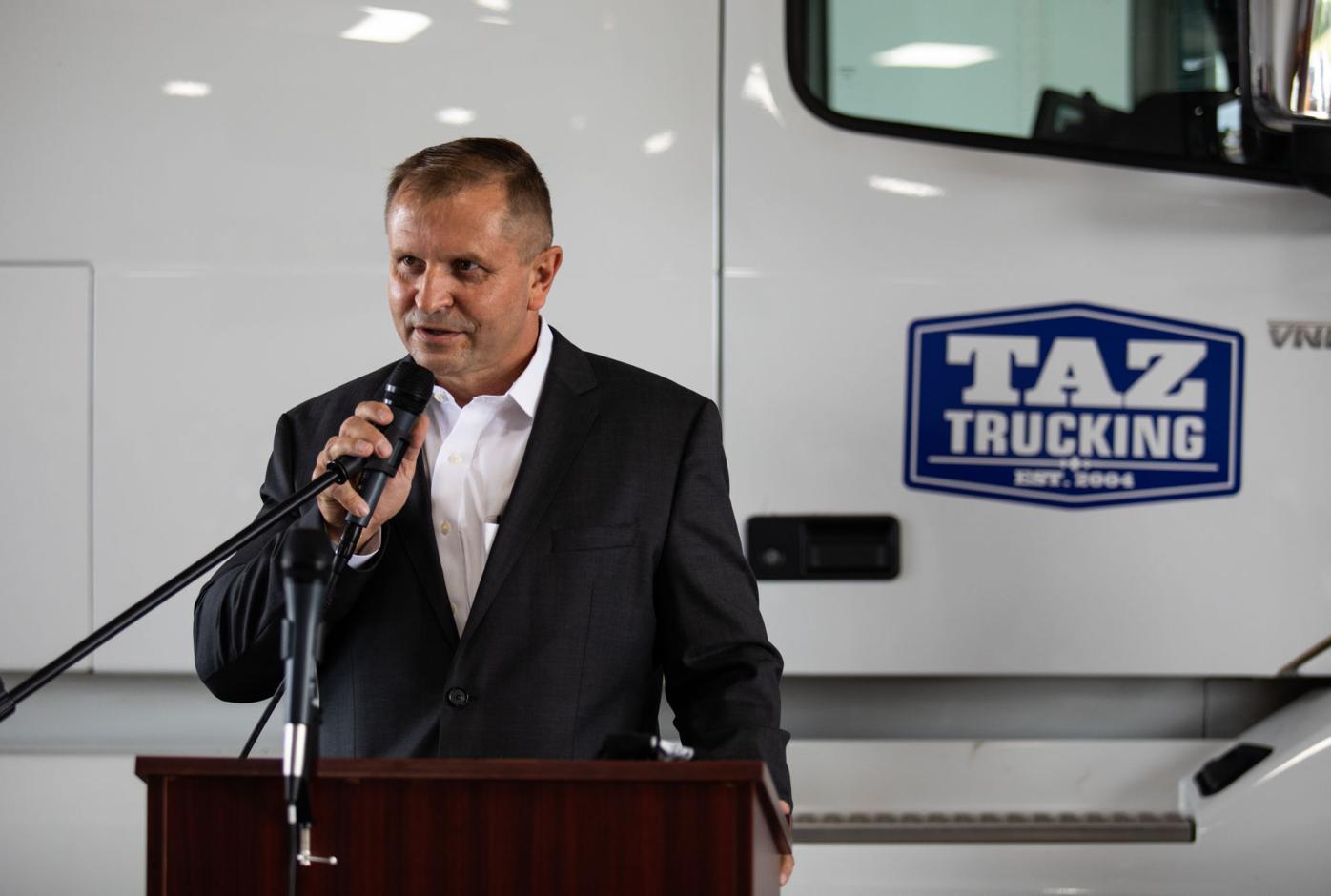 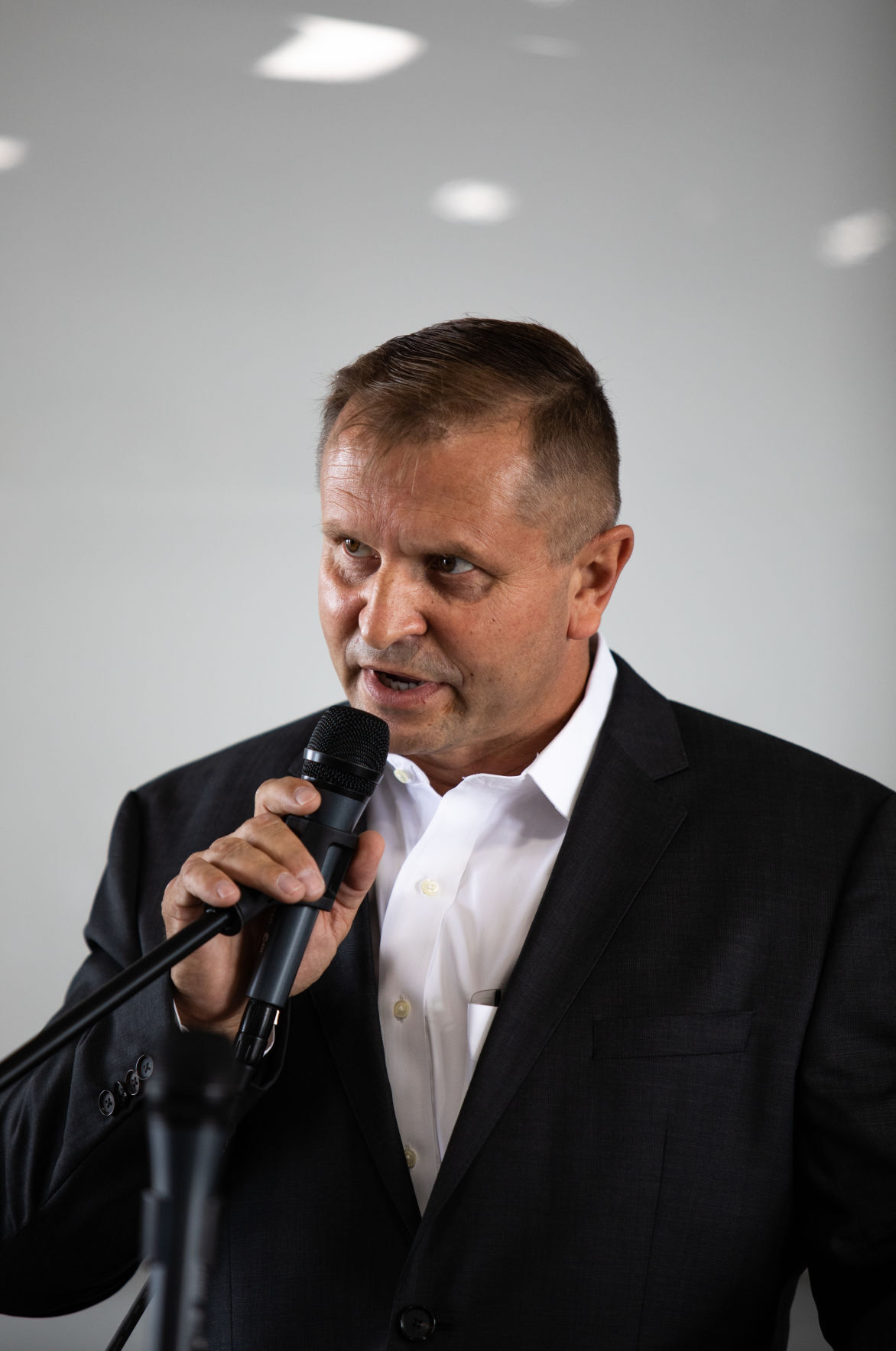 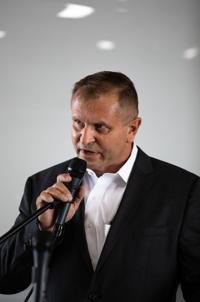 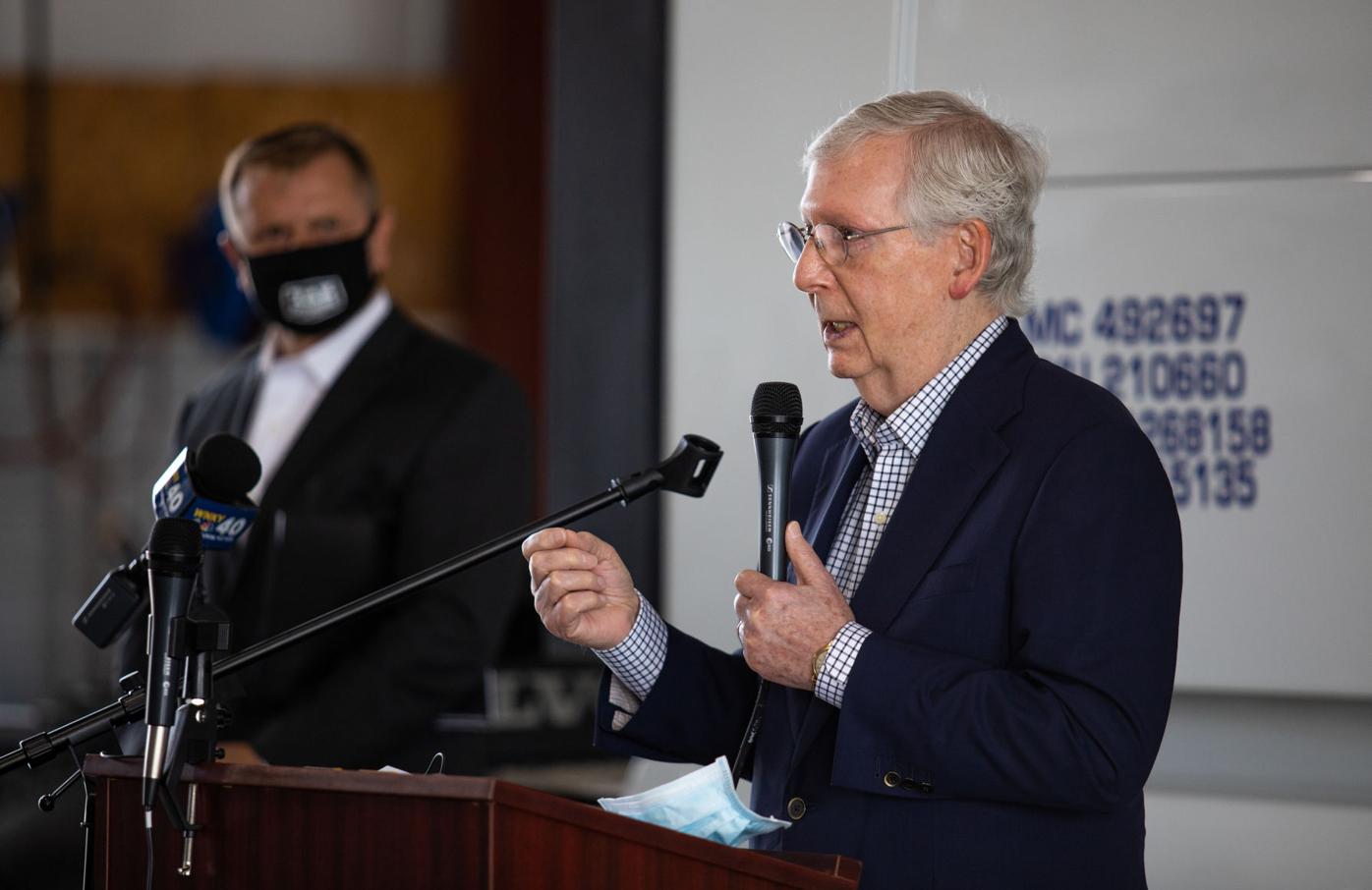 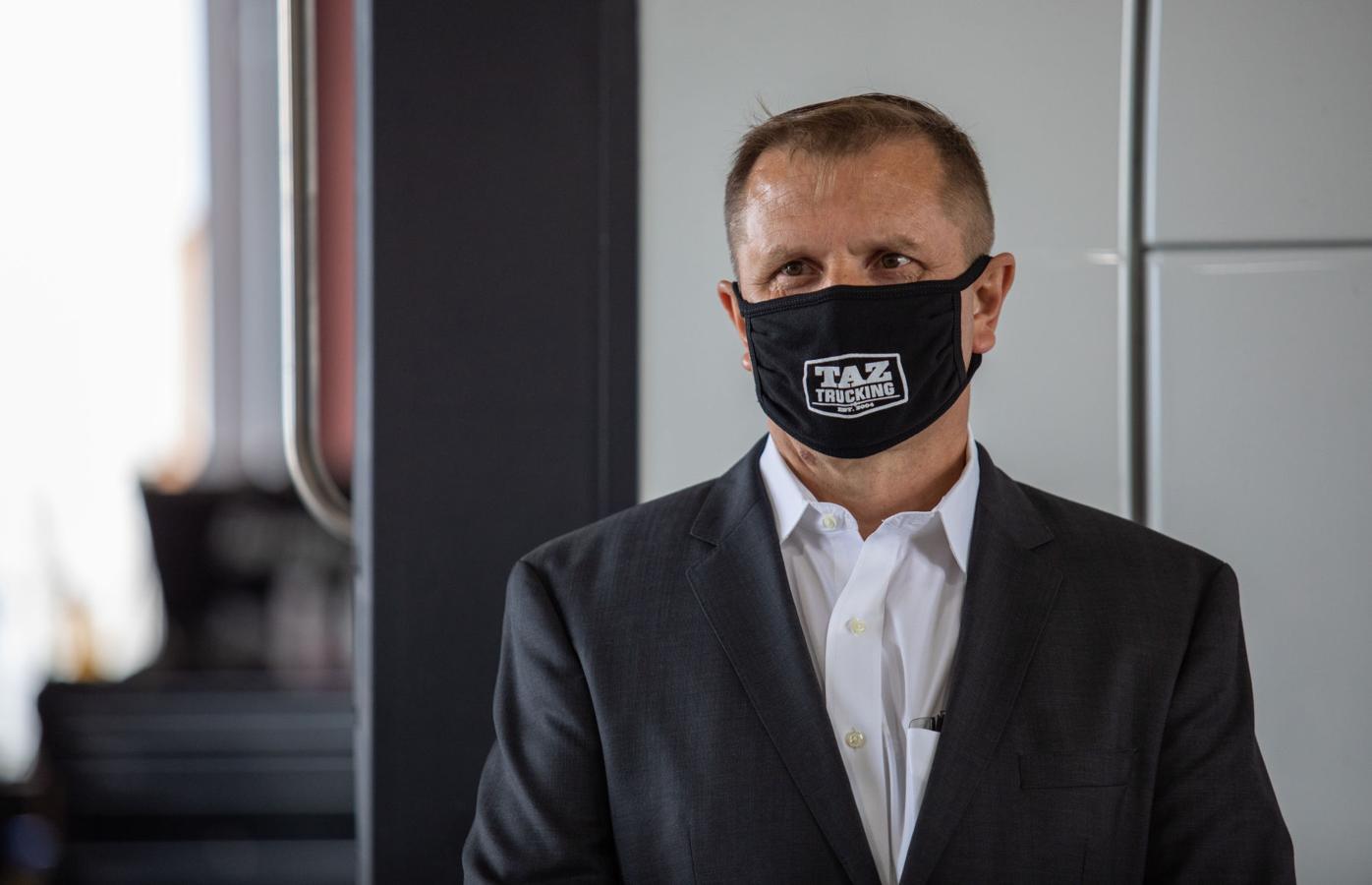 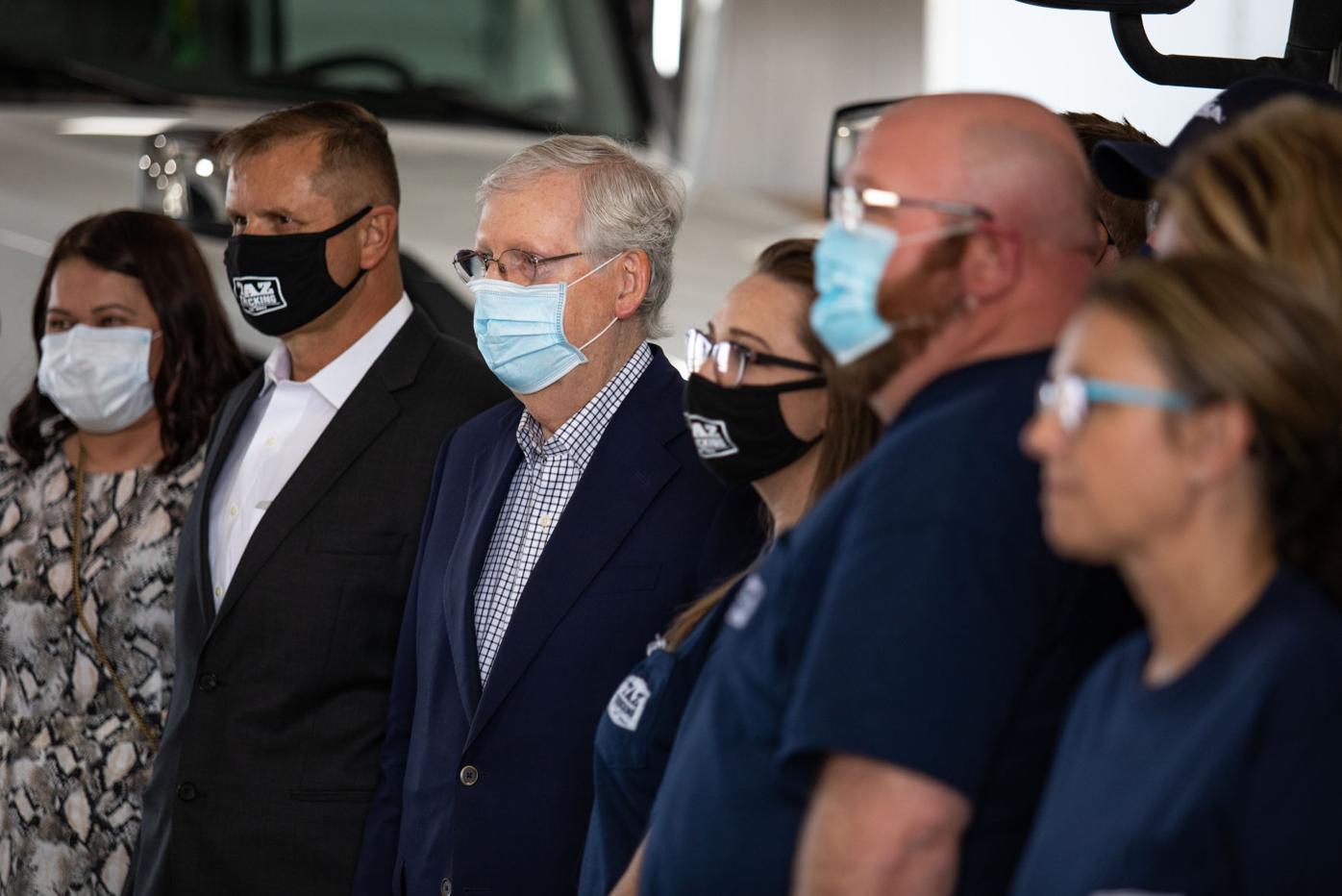 U.S. Senate Majority Leader Mitch McConnell, R-Ky. (center), poses for a photos Friday with the employees of Bowling Green's TAZ Trucking after discussing the impact of the Coronavirus Aid, Relief, and Economic Security Act on Kentucky at the freight company on Friday, Sept. 4, 2020. (Grace Ramey/photo@bgdailynews.com) 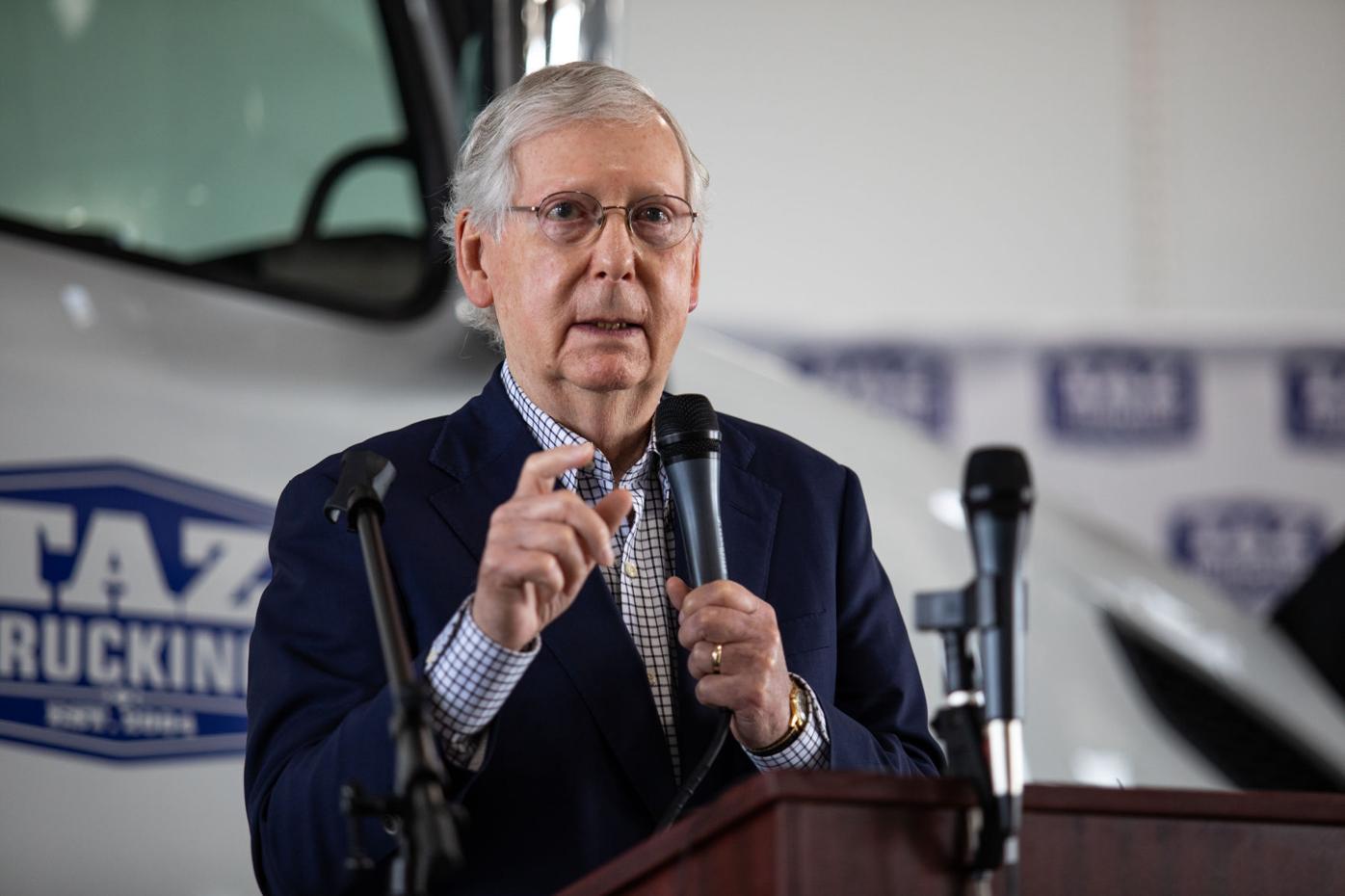 U.S. Senate Majority Leader Mitch McConnell, R-Ky., claps as city and state officials are welcomed by TAZ Trucking President Tahir Zukić to the freight company before coming to the podium to discuss the impact of the Coronavirus Aid, Relief, and Economic Security Act on Kentucky on Friday, Sept. 4, 2020. (Grace Ramey/photo@bgdailynews.com)

U.S. Senate Majority Leader Mitch McConnell, R-Ky. (center), poses for a photos Friday with the employees of Bowling Green's TAZ Trucking after discussing the impact of the Coronavirus Aid, Relief, and Economic Security Act on Kentucky at the freight company on Friday, Sept. 4, 2020. (Grace Ramey/photo@bgdailynews.com)

In Bowling Green on Friday to celebrate the success of federal spending that helped thousands of businesses survive the economic devastation of the coronavirus pandemic, Senate Majority Leader Mitch McConnell admitted that another stimulus package is unlikely in this hyper-partisan election year.

The federal Coronavirus Aid, Relief and Economic Security Act has pumped about $700 billion into forgivable loans to businesses through the Paycheck Protection Program, and McConnell touted the success of the PPP with a visit to TAZ Trucking Co. on Nashville Road.

Wearing a mask as he was introduced by TAZ Trucking owner Tahir Zukic, McConnell later called the Bosnian-born entrepreneur “a great example of how the PPP has helped us get through this period.”

TAZ Trucking, founded in 2003 by Zukic and his wife, Amira Zukic, now occupies a 50,000-square-foot headquarters, has more than 100 trucks and employs about 150 workers.

But despite his success in building TAZ Trucking, Tahir Zukic called the PPP “a lifesaver” for his company and for others around the country.

“For three months we had no freight moving,” he said. “Nearly all the factories were shut down. But we were able to keep all our employees paid.”

McConnell said that was just one example of the benefits of legislation that he championed. The six-term senator, who is being challenged this year by Democrat Amy McGrath, said the PPP has helped more than 50,000 Kentucky small businesses and nonprofits with more than $5.2 billion in forgivable loans.

He said the CARES Act has delivered more than $62.4 million to Warren County, including $37 million for The Medical Center at Bowling Green and $10.6 million for Western Kentucky University.

Yet, while celebrating that use of federal funds, McConnell pointed out that it has led to a ballooning of the federal debt and a reluctance to pump more money into households and businesses even as the pandemic continues.

The Congressional Budget Office said last week that this year’s deficit will hit $3.3 trillion, adding to a national debt that is already beyond $20 trillion. The CBO said the national debt will exceed the size of America’s gross domestic product for the first time since the end of World War II.

The Democrat-run House has passed a $3.5 trillion second stimulus bill, but McConnell said the GOP-controlled Senate would like to scale that down.

“I’d like to see one more round of stimulus funding,” McConnell said as he was flanked by two TAZ trucks. “But it can’t be as large as what the House passed.”

A compromise isn’t likely, the senator said, because “the environment in Washington is extremely partisan in this election year.”

“I can’t promise another funding package, but I’m proud of what we did do,” McConnell said. “This (TAZ Trucking) is the best example of what we hoped to achieve.”

While not hopeful about a second stimulus bill, McConnell expressed optimism about a U.S. Department of Labor August jobs report that showed the nation’s unemployment rate dropped to 8.4 percent from 10.2 percent in July.

He said he’s also encouraged by news that progress is being made on developing a coronavirus vaccine.

“We hope a vaccine will be available later this year or early next year,” McConnell said. “In the meantime, we need to practice social distancing and wear masks.

“We’re not going to shut the economy down again.”

Mitch McConnell fails to note the hundreds of thousands of PPP bailout dollars his family got, and no one seems to think Kentucky Congressman Brett Guthrie receiving $4.4 million in PPP loans for Trace Die Cast, the business he owns and sits on the board, is problematic. Speaker Pelosi's husband getting one tenth that amount was scandalous, but Guthrie? Shhh. Let's not speak of it.

Both McConnell and Guthrie got funding in the very first round of the CARES Act, and subsequently voted to relax requirements for its use. After these two multi-millionaires got theirs (neither of which has lost a single day's pay as politicians during this pandemic), they vote against the HEROES Act that would bring relief to a devastated working class nationwide. They got theirs. Guthrie got 44 times as much as the average Kentucky loan. But now there'll be no new funding. They're full. They don't care. They don't have to.

Did I mention neither of these multimillionaires have spoken a word about our president referring to dead veterans as "losers"? Or are both on vacation while the pandemic kills more Americans than WWI, and soon more than WWII?