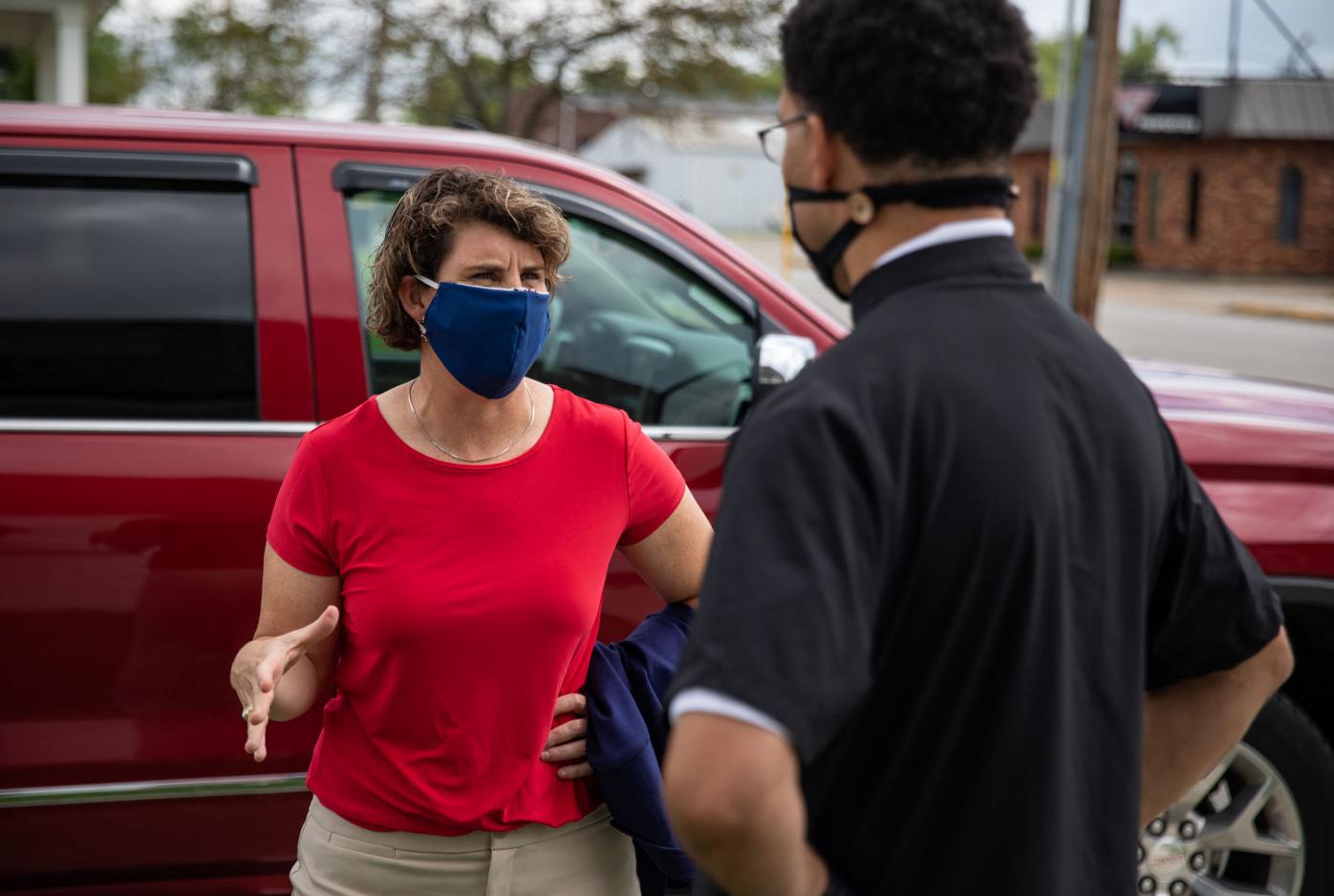 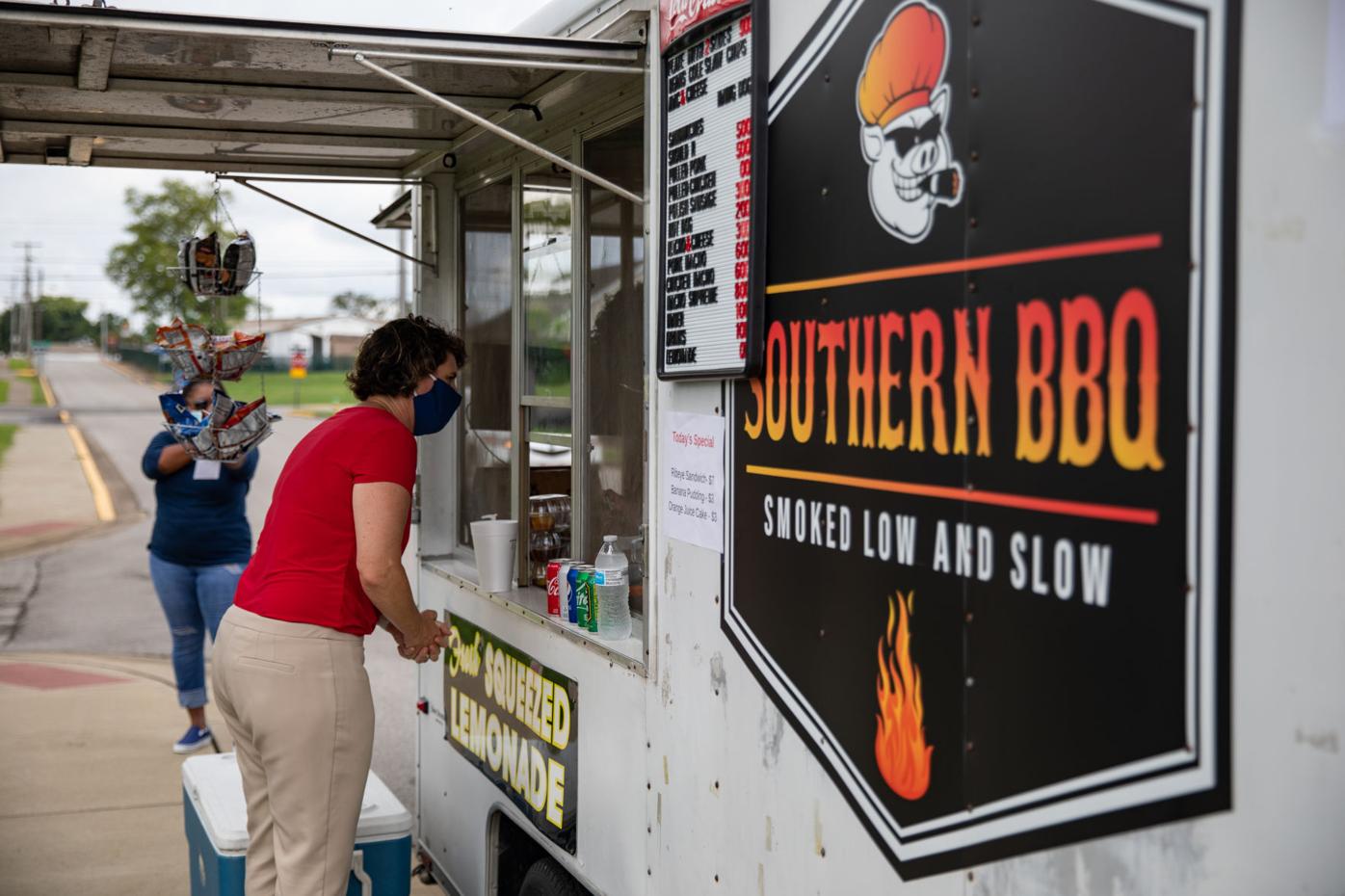 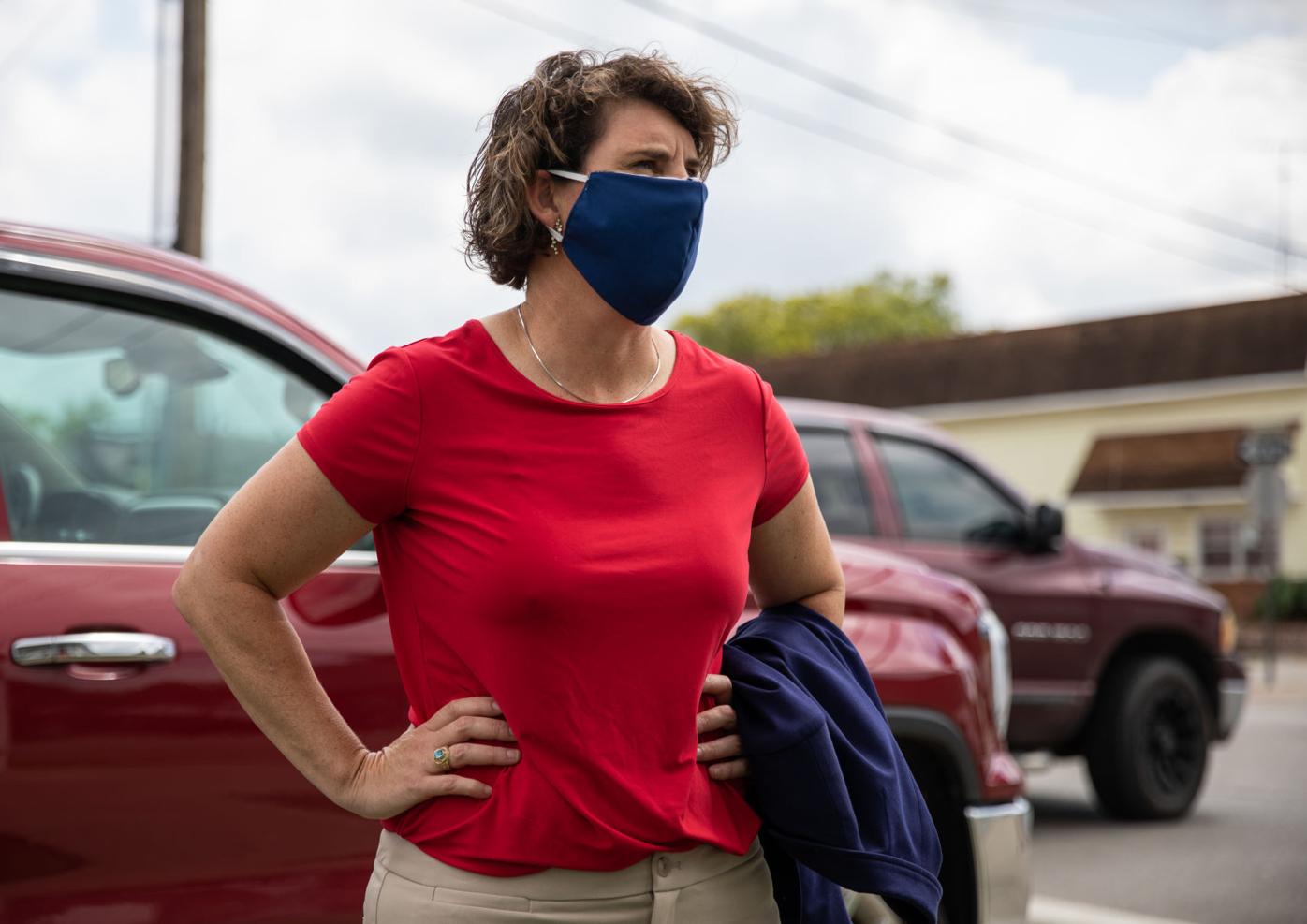 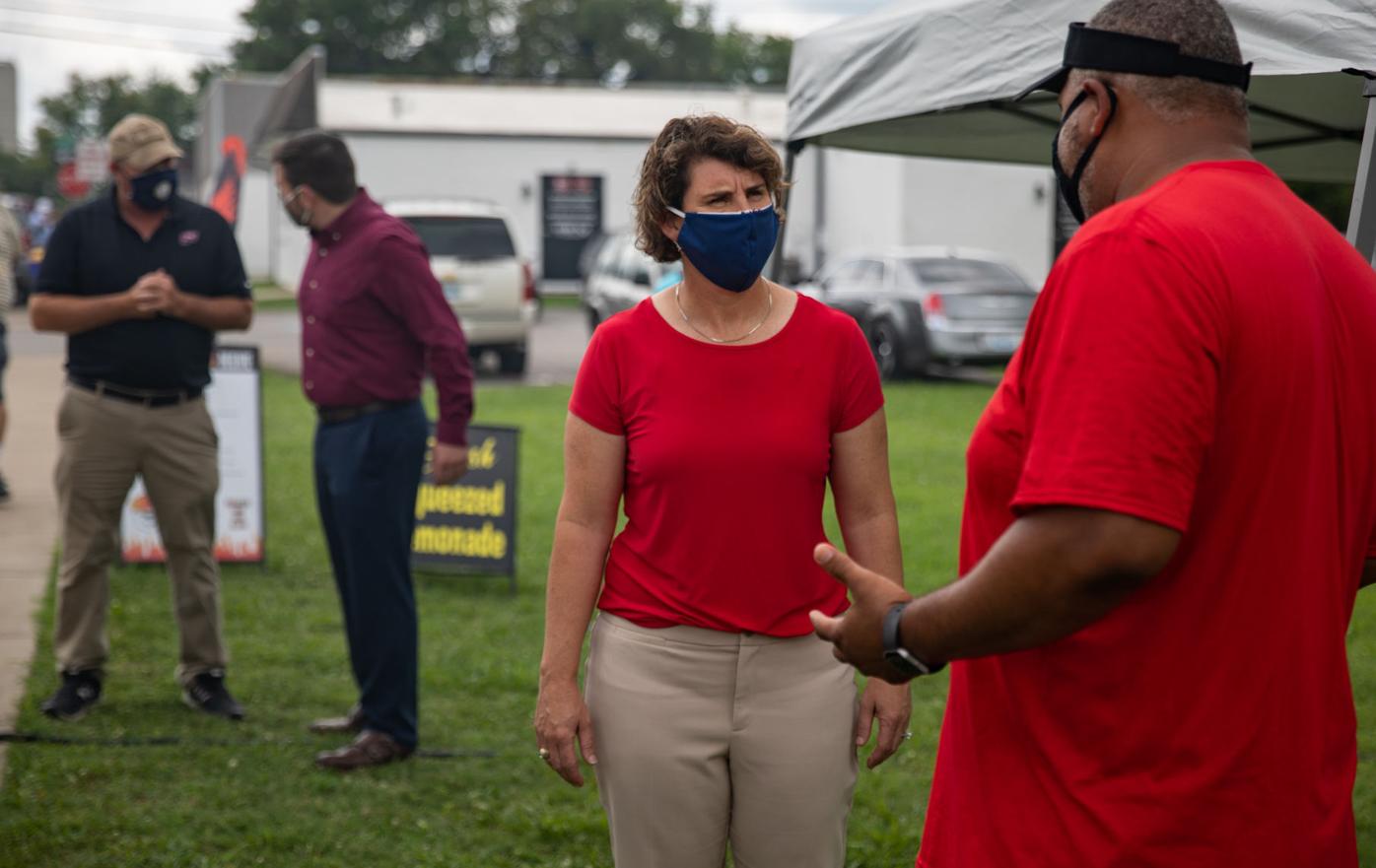 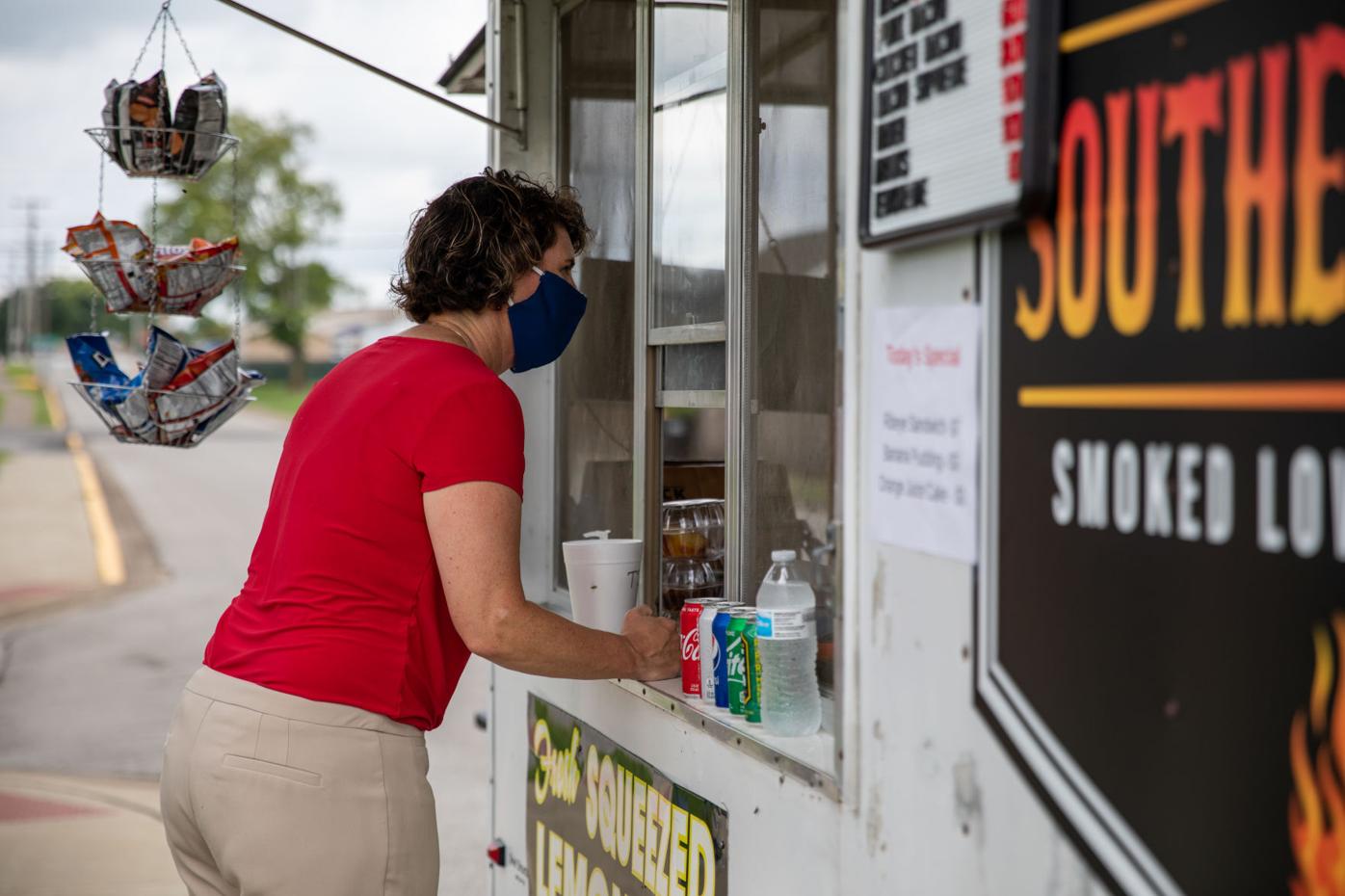 Shake Rag Barbershop owner Chris Page has gotten to know Amy McGrath since she announced her candidacy for U.S. Senate one year ago.

So, when the Democratic nominee to face incumbent Republican and Senate Majority Leader Mitch McConnell made a campaign stop Friday in Bowling Green, Page welcomed McGrath to his shop to talk with potential voters and have some BBQ at the Southern BBQ food truck.

“That’s what this is all about – to be in as many places, talk to as many people as I can given the public restrictions that we have,” McGrath said, referring to coronavirus guidelines. “It is tough, but it is important. This is a campaign. This is the future of Kentucky. This is the future of our country, so we have to do everything we can.”

The Shake Rag Barbershop was one of several Bowling Green stops for McGrath on Friday.

“I’m also here talking to educators and I am also here to talk to community leaders who deal with housing and are dealing with all the issues that are going on with coronavirus and housing here,” McGrath said. “I just came from the union hall at the UAW, talking about workers and benefits and what is going on right now with liability protections that Mitch McConnell wants to push down for big corporations. We are out here talking to lots of different people.”

Page said there are a lot of things he likes about McGrath, including her willingness to come to his business and listen to his concerns.

“I’ve sent out word to the Republican campaign that Mitch McConnell is welcome down here,” Page said. “We haven’t gotten a response.”

Page said he also likes that she has broken ground by being the first female fighter pilot to fly a combat mission for the Marines and that her experience as a fighter pilot shows she knows how to work in a high-stress environment.

Shake Rag Barbershop employee Dale Spearman said he voted for Charles Booker in the Democratic primary last month, but after speaking to McGrath and expressing his concerns Friday, he was pleased with her responses.

McGrath said her message to anyone who didn’t vote for her in the primary is that ultimately she shares the same values as every other candidate in the Democratic primary – including affordable health care and good-paying jobs.

And Page is confident that McGrath’s message will help her defeat McConnell in November.

“Charles Booker had nothing to be ashamed of when he lost to her and she has nothing to be afraid of,” Page said. “I actually think she is the favorite. I think Mitch McConnell is in trouble, I really do. When you think about it McConnell has been in there for 34 years and Kentucky is at the bottom. Even if you don’t like her, can’t stand her, she can’t do no worse than Mitch McConnell.”

Amy was here? Oh dam, I forgot to call Scott Waste Management to come pick up the human garbage.