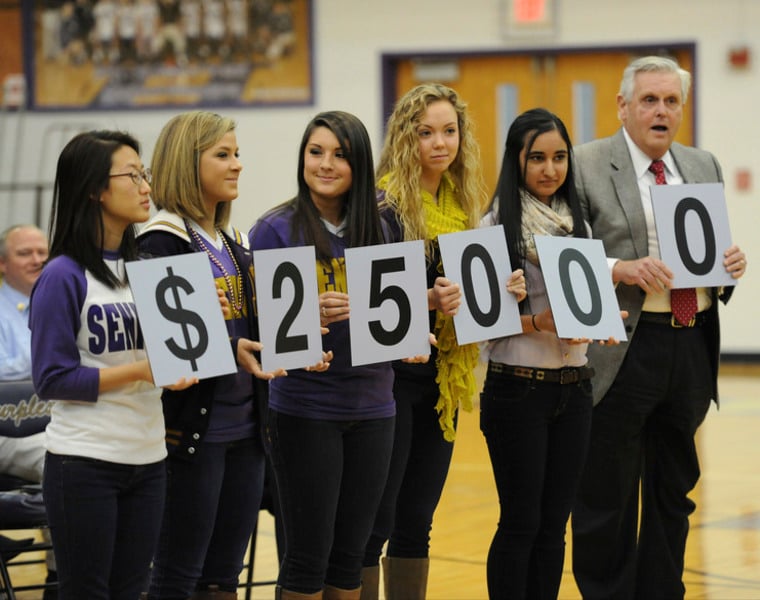 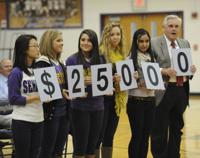 Kentucky Education Commissioner Terry Holliday (right), holds up numbers with BGHS students Wednesday. Bowling Green High School Freshman Principal William King was honored with a Milken Educator Award and $25,000 on Wednesday. The Milken Educator Award, called the "Oscars of Teaching" by Teacher Magazine, was presented as the cheers of 1,200 students bounced off the walls of the high school's arena.(Joe Imel/Daily News) 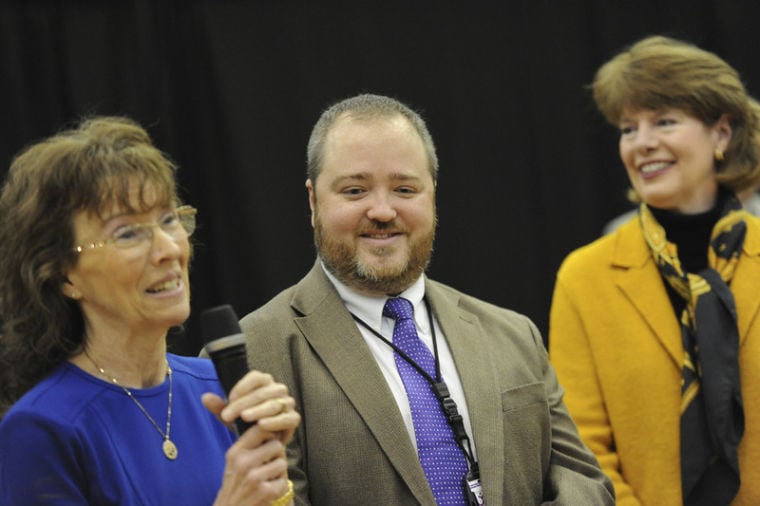 Bowling Green High School Freshman Principal William King comes down to receive his award. King was honored with a Milken Educator Award and $25,000 on Wednesday. The Milken Educator Award, called the "Oscars of Teaching" by Teacher Magazine, was presented as the cheers of 1,200 students bounced off the walls of the high school's arena.(Joe Imel/Daily News)

Kentucky Education Commissioner Terry Holliday (right), holds up numbers with BGHS students Wednesday. Bowling Green High School Freshman Principal William King was honored with a Milken Educator Award and $25,000 on Wednesday. The Milken Educator Award, called the "Oscars of Teaching" by Teacher Magazine, was presented as the cheers of 1,200 students bounced off the walls of the high school's arena.(Joe Imel/Daily News)

William King is still in shock this morning after being presented the Milken Educator Award on Wednesday during a student assembly.

King will receive $25,000 after being presented with the Milken Educator Award on Wednesday.

King will have to fill out tax forms and a biography and send the information to the foundation before receiving the money.

Janet Foley, senior vice president of the Milken Family Foundation, traveled from Santa Monica, Calif., to honor King. Since the Milken honor was a surprise, the BGHS students, teachers and staff were told the morning’s assembly Wednesday was to honor academic achievements of students.

Principal Gary Fields read a list of academic honorees, citing state awards, high ACT scores and other accomplishments. The kids filed into folding chairs set out in the middle of the floor, receiving applause from their peers.

Behind those students were gold and red banners hung along the bleachers, proclaiming the values of education, turning the assembly into more of a pep rally atmosphere. Several photographers and videographers worked on the gym floor, making a video that will be posted on the Milken website.

When Kentucky Educator Commissioner Terry Holliday’s turn to speak came, he used his phone to take a video of the BGHS students, asking them to yell “Hi, KDE (Kentucky Department of Education)!”

“You bring such honor to Kentucky,” the Holliday said.

King said he first became aware of the real purpose of the assembly when Foley took center stage and talked about the Milken Educator Award and said that she was there to bestow it on a BGHS educator.

“I had no clue. I had a list of all these names in my head. It could have been anybody on our staff,” King said.

Unlike other honors, the Milken award isn’t one where recipients apply or are recommended by fellow administrators.

“We don’t accept nominations. You don’t find us, we find you,” Foley said.

Then Foley called out King’s name, and he approached the microphone. She asked him about some of the programs he’s started at the high school, including an early morning activity to help kids with academics. She said many educators don’t realize how special their efforts with kids are compared to those of their peers across the country.

“One educator has the power to influence thousands of lives,” Foley said.

Even when King received the honor, he talked of others.

“There is no other place I’d want to teach or work at,” King said. “We do have an awesome staff and an awesome student body.”

“He’s a cool guy,” BGHS senior Zeldon Peterson said. “He helps the students a lot and keeps them on track.”

“He always comes into our social studies class and talks with us,” said BGHS junior Savannah Hanson. She said Milken made “a good choice” in selecting King.

The 1996 BGHS graduate said he could have taken a teaching job in Boone County after college graduation, but chose instead to take an aide job at BGHS. He was an aide for one year before getting his first social studies teaching post.

King is married to Elizabeth, and they have two children, Gavin, 5, who attends McNeill Elementary School, and Gwen, 2.

“Will is all about helping kids,” Fields said.

— For more information on the Milken Educator Award and photos of the presentation in Bowling Green, go to milkeneducatorawards.org.